UberEATS has changed the nature of Adelaide's food service, but - as some of the city's best restaurateurs told us - change is not always for the better.

UberEATS was not the first platform in Adelaide responsible for delivering freshly prepared convenience directly to your door, but it’s certainly the most talked about.

From changes to the way drivers’ are paid, Uber’s fold in favour of allowing tipping for delivery drivers, the resignation of former CEO Travis Kalanick, and myriad thinkpieces (one of which we contributed), there’s a lot to be discussed.

Undeniably though, the platform has transformed Adelaide’s hospitality industry – and that transformation goes beyond a simple injection of convenience.

Bagel Boys Bakery in Adelaide is an almost 30-year-old business. 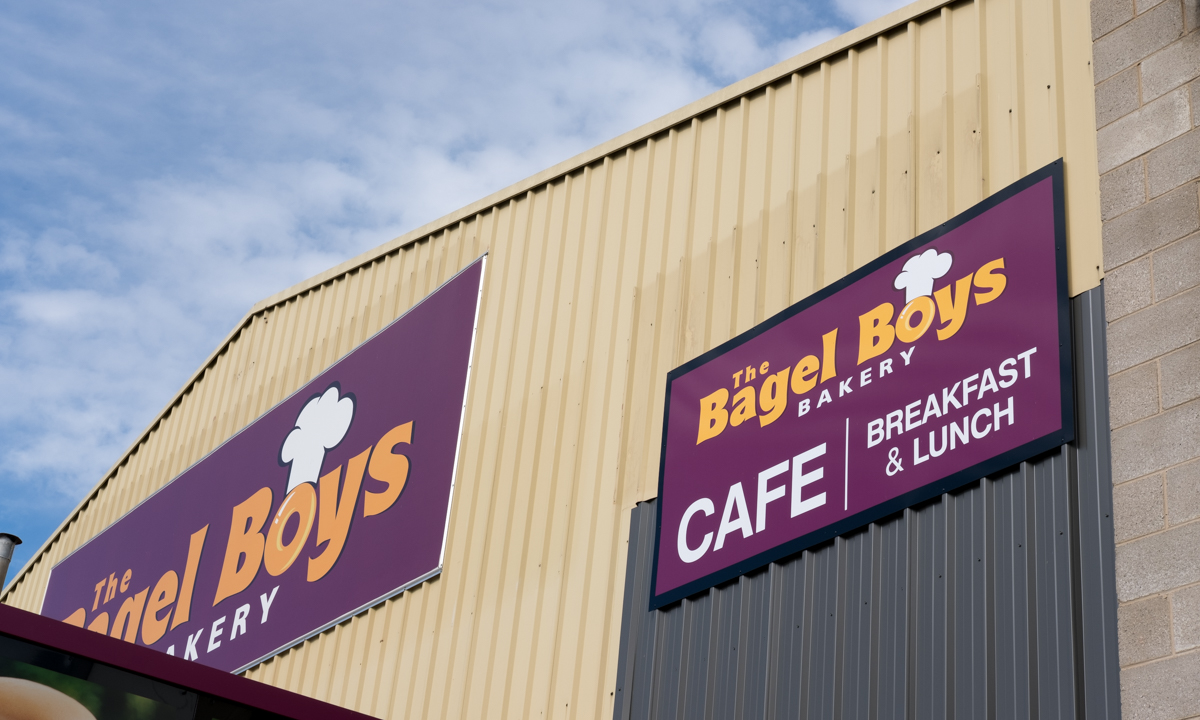 At its peak, it had a wholesale space on Goodwood Road with a café at the front, and a couple more locations strewn throughout metropolitan Adelaide.

But when current Bagel Boys Bakery Director, Neil Clark, took over 14 years ago, the business’ main focus was wholesaling.

“It’s probably maybe not doubled our business, but a good increase by 35-40 per cent.” – Neil Clark

“It used to be really good before the GFC, because we had all the Drakes [Supermarkets] as well, and then the GFC hit. We lost 30 per cent of our work in the space of about two weeks,” Neil says.

Currently, Bagel Boys Bakery sits in a factory on Richmond Road and sells to some Foodlands and IGAs, as well as to the Central Market, an Adelaide distributor that supplies small cafes around town, and interstate to Perth and New South Wales.

But Neil is inching back towards the Bagel Boys’ old business model. He’s dabbling in direct-to-customer retail with a café at the Richmond Road factory selling bagels filled with things like smoked salmon and cream cheese. 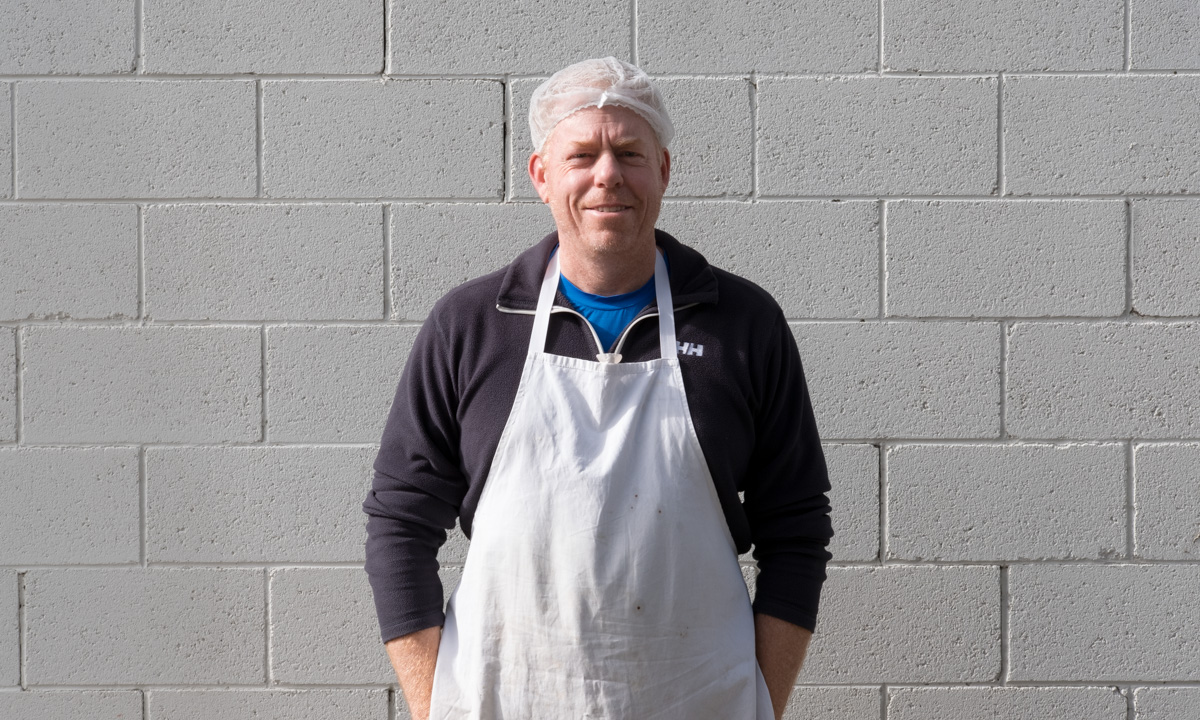 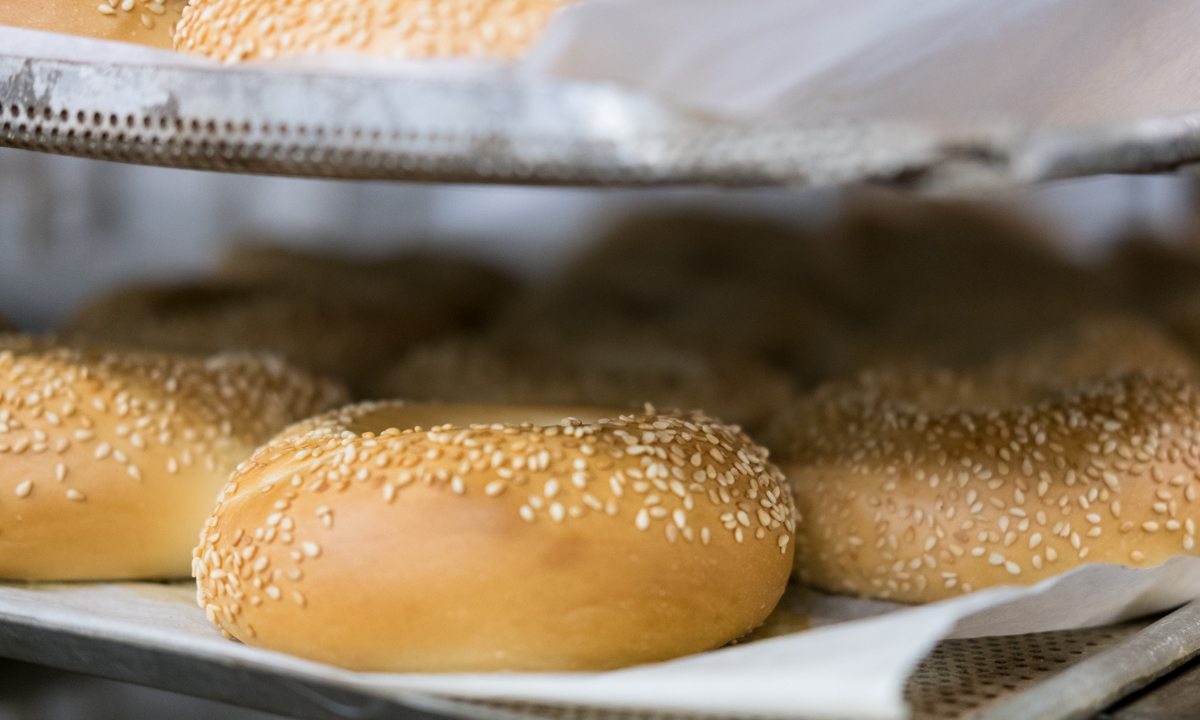 “That’s where Uber has come in,” says Neil.

Prior to joining the platform, the café was doing ok – but not well enough to support an extra full time staff member.

“It’s probably maybe not doubled our business, but a good increase by 35-40 per cent. And like I said, it gives us a reach that a normal shop wouldn’t have,” says Neil.

“I don’t think we would’ve got [those sales]. The reach is too far away for someone who works in a shop, or works in an office somewhere to go ‘I’ll walk there,’ [or] ‘Will I drive there?’ It picks up on a lot of people that are a bit undecided on what they’re going to have.”

From the increase in business, Neil has not only been able to hire that extra full-time staff member, but he’s also considering a second store.

This is, of course, the optimistic promise of UberEATS. But Neil’s business is almost purpose-made for the app. He has lower production costs and can churn out enough bagels to stock his retail offering for a week by leaving the machine running for just “another five minutes.”

But, the Uber pitch doesn’t suit everyone. It hasn’t been embraced by Jacqueline Lodge and Christophe Zauner of Hey Jupiter.

“I actually use Uber twice a day, so I love Uber,”says Jacqueline, “but just for our business, our kitchen is so small, so we were already at the capacity of what we were doing over the lunch period as it was.”

“How sad is it, then, if everyone wants to stay at home and eat? That’s not why I do this.” – Jacqueline Lodge 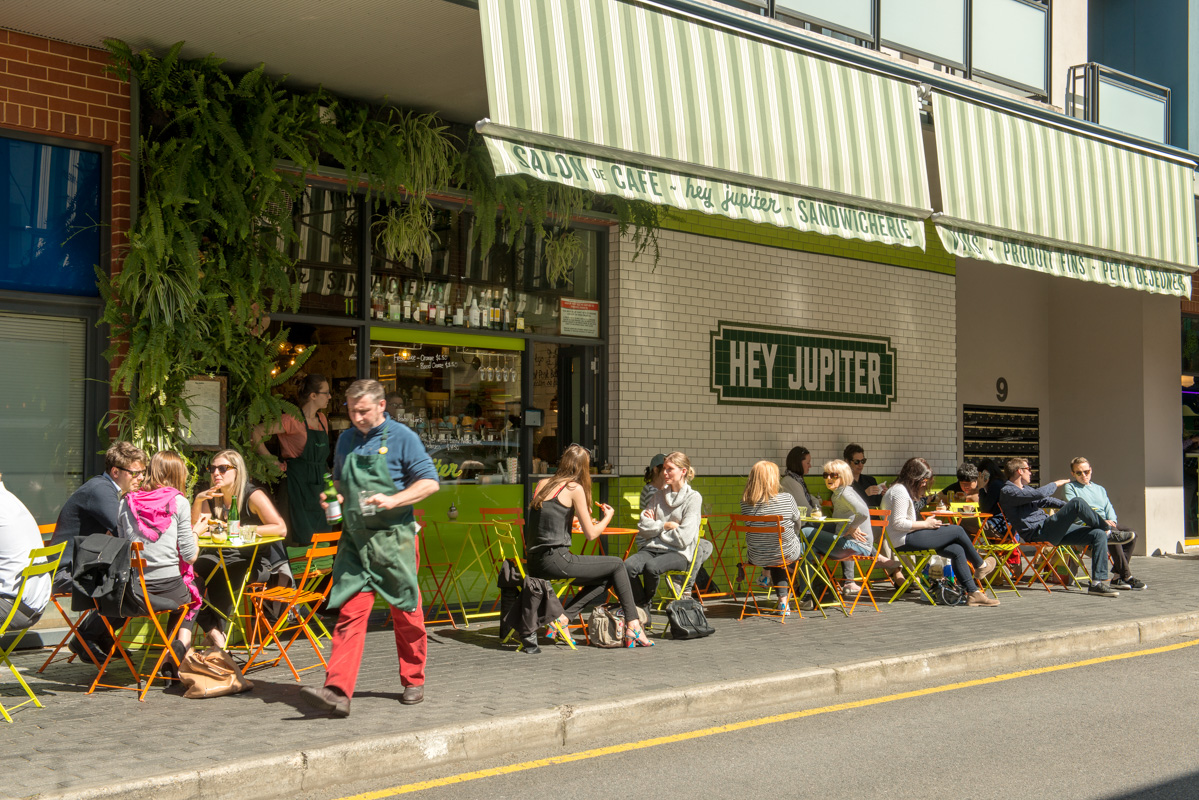 “Everybody wants ‘Yeah, I can double my business,’ but if you can’t actually provide it in a good way that’s not going to affect all the people that are coming here between 11am and 2pm to sit in, and if they are waiting because I’m sending things out to other places, it can be damaging as well,” she says.

Even when Hey Jupiter expands from a café into a fully-fledged restaurant, Jacqueline and Christophe don’t see UberEATS as a viable option.

“UberEATS is about convenience and being able to get good food without having to leave your house. And so I think that’s very good, but at the same time, it’s not like being there, do you know what I mean?,” says Jacqueline.

“How sad is it, then, if everyone wants to stay at home and eat? That’s not why I do this.”

With the explosion of new cafés, bars and eateries throughout the city, it’s true that for many of Adelaide’s foodie crowd (and apparently all Millenials), the experience, in tandem with considered and well-prepared food, is key to a good meal.

And an experience is difficult to deliver in a brown paper bag.

This is a problem for Ben Kelly, who, as part of the Kardachi collective of venues, works at Melt and Osteria Oggi, and is a partner at Shōbōsho.

“I think that UberEATS, for a Melt and a Bread and Bone model, works really well, and I think that’s probably where its niche is, in those areas… Styles of food [that] have traditionally been catered for by delivery services,” says Ben.

“It’s been interesting, their alignment with McDonald’s. Suddenly their pitch about premium brand partnerships doesn’t seem quite so premium.” – Emma Nicholls 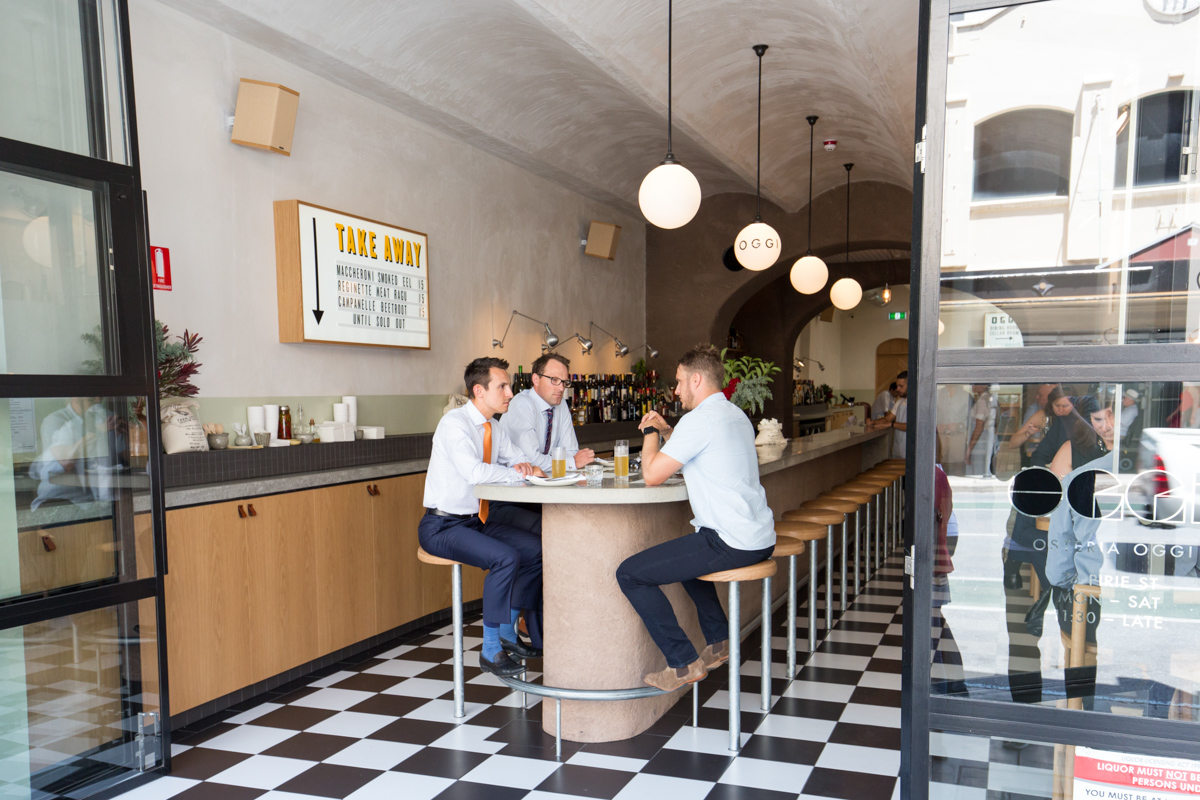 Osteria Oggi’s service through UberEATs has been “paused”. This photo: Andre Castellucci

“I don’t see, for premium restaurants, that it’s a good fit, because I think it can diminish your branding.

“I think Oggi is a premium restaurant… Will the delivery food represent the quality of the food you’re producing in the restaurant? It comes out of the pans into a box. How long is it going to sit in that box for? You don’t know. If they’re super busy, there might be some delays – all those sorts of contributing factors come into play.”

CityMag reached out to Uber for comment, and asked several specific questions. We received this response after deadline, and have included it in its entirety below:

“Since we launched UberEATS, we’ve been overwhelmed by the way Australians have embraced a new way to get the food they love. We offer our customers a wide range of choices, whether it be a healthy breakfast Acai bowl delivered to work, a nutritious family chicken dinner mid-week or a salmon poke for lunch at the weekend,” says an UberEATS spokesperson.

“We’re thrilled to be bringing even more choice to our customers with the addition of McDonald’s favourites now available for delivery at Uber speed.

“Delivery-partners are attracted to the UberEATS app because they want to make money on their own schedule and be their own boss. We provide them with tips and information to be successful on the app and work hard to maintain a high quality experience for restaurants and consumers.”

As for the benefits of brand alignment, according to Emma Nicholls of Brand Science, who oversees the marketing of the Kardachi collective of restaurants, the marketing weight of Uber is diminished when it partners with less-than-premium brands.

“Uber’s pitch to us when it first entered the Adelaide market was that it was very much about a premium brand alignment, so we then also looked at Press* and Oggi… but all of that was very much a marketing decision, as well as business decision,” Emma says.

“It’s been interesting, their alignment with McDonald’s. Suddenly their pitch about premium brand partnerships doesn’t seem quite so premium to me anymore.”

And from a service perspective, it can be a daunting thought to hand over your product – and so too, your identity – to a third party.

“One of the great things about this platform is this rating scheme. You get instant feedback if they’re not doing the right thing,” says Ben. “But I think for mine, one thing I’d like to see in the long run is better driver training, of being able to interact with people well, and just so they represent Uber well by being branded, so the people know who they’re dealing with.”

While Melt and Bread and Bone will remain on the platform, Kardachi has “paused” Press* and Oggi’s UberEATS presence.

There’s no doubt certain eateries thrive on the Uber model, but there’s also little doubt that Adelaide’s flagship premium restaurants are under pressure to yield their exacting standards to the ever-increasing demand for convenience.

For now, though, many of them are sticking to the idea that it might not be worth sacrificing a truly hospitable experience for some sales delivered in a brown paper bag.