What you'll be eating tonight. 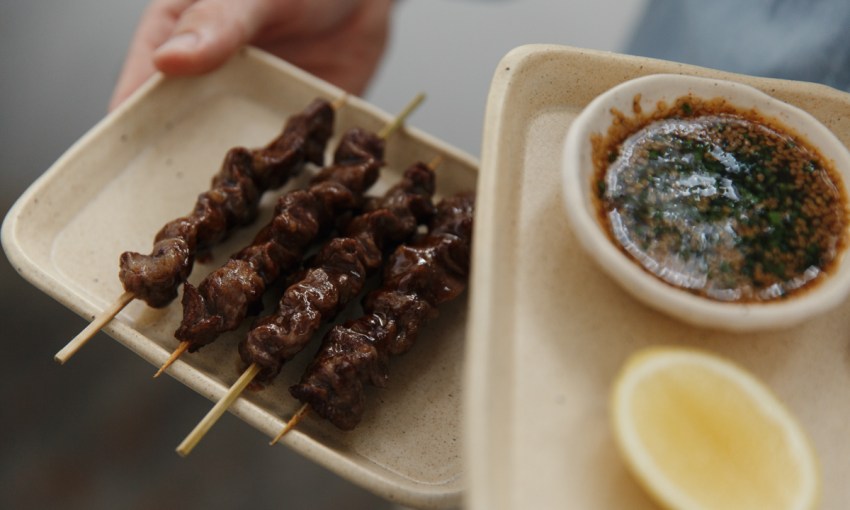 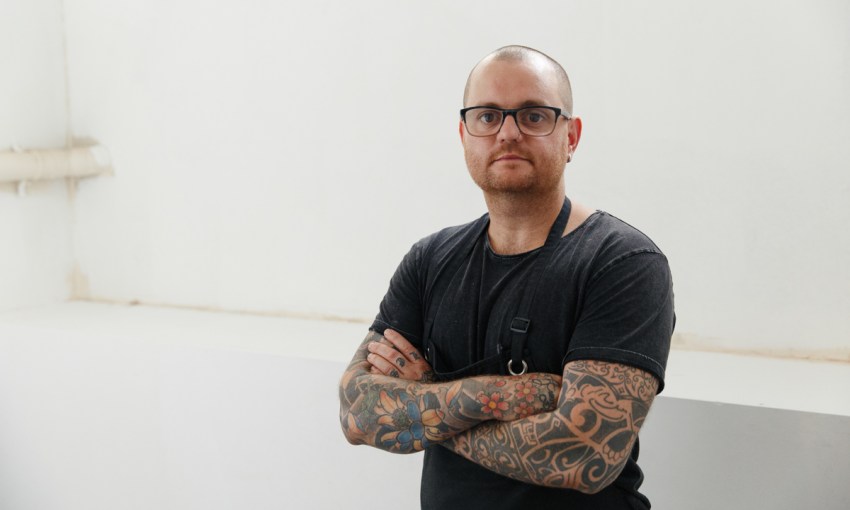 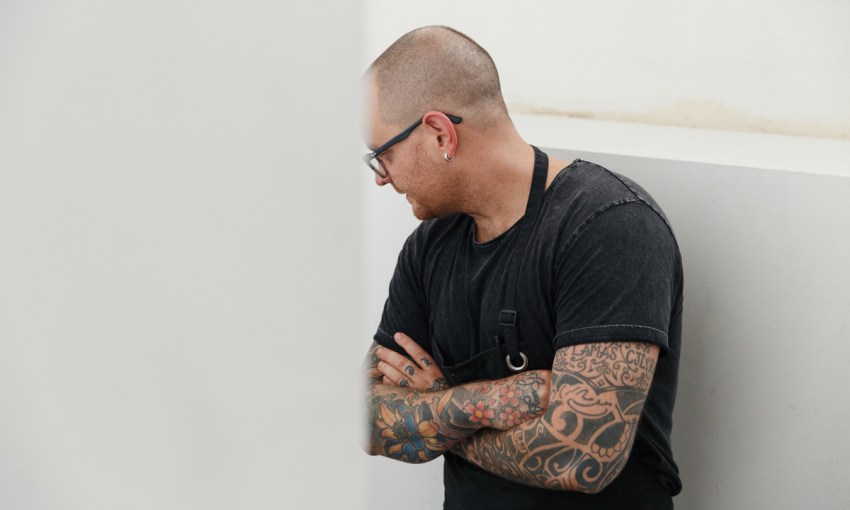 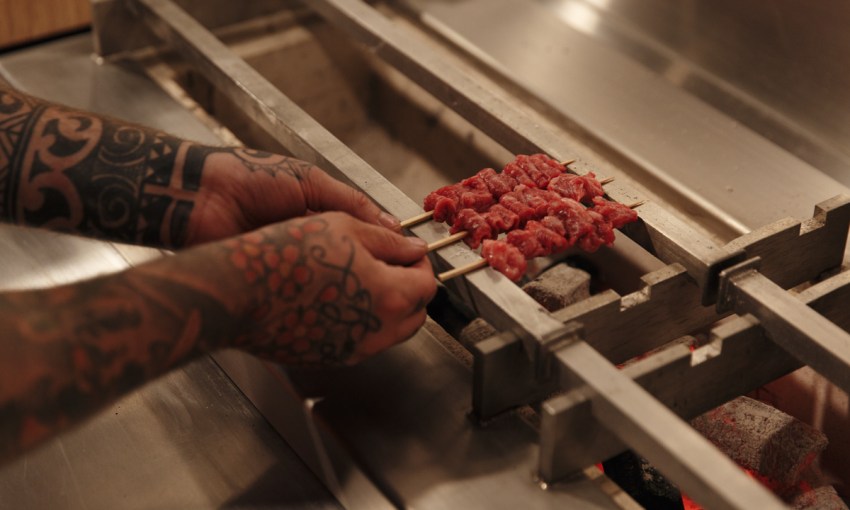 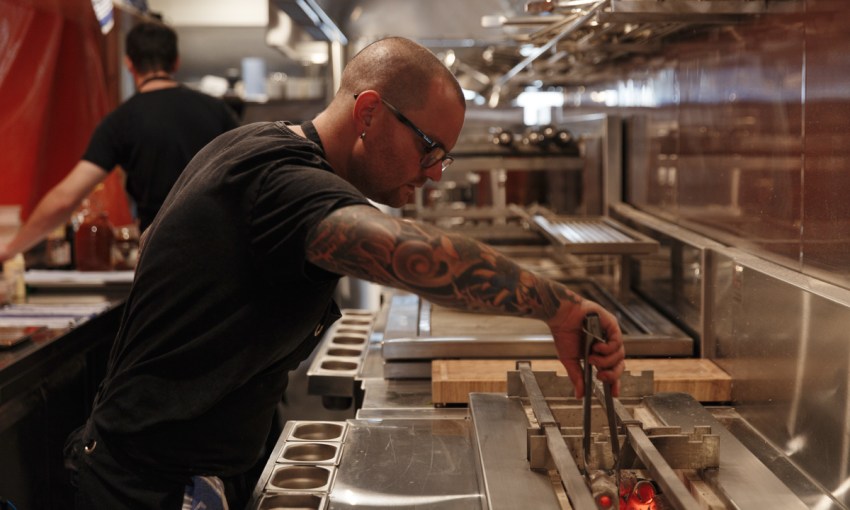 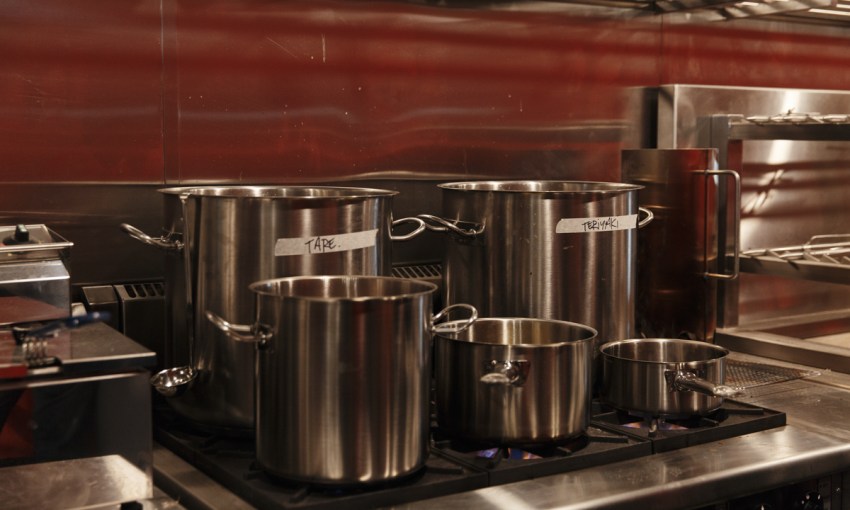 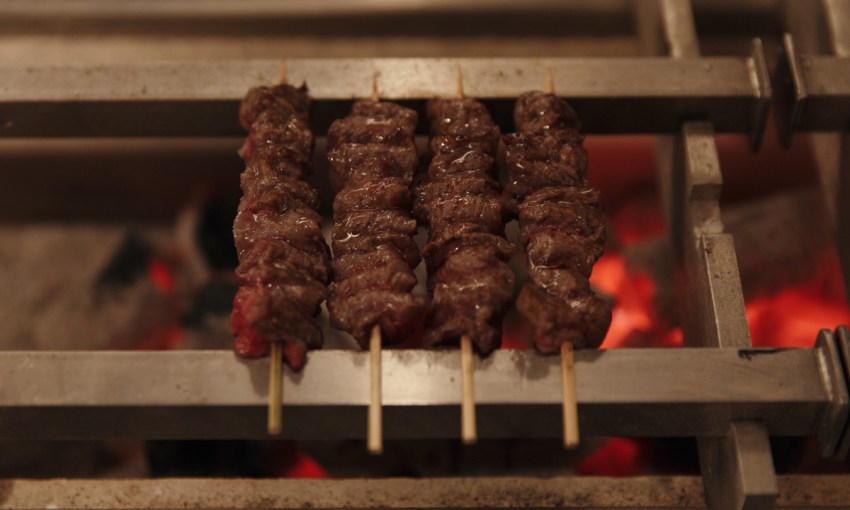 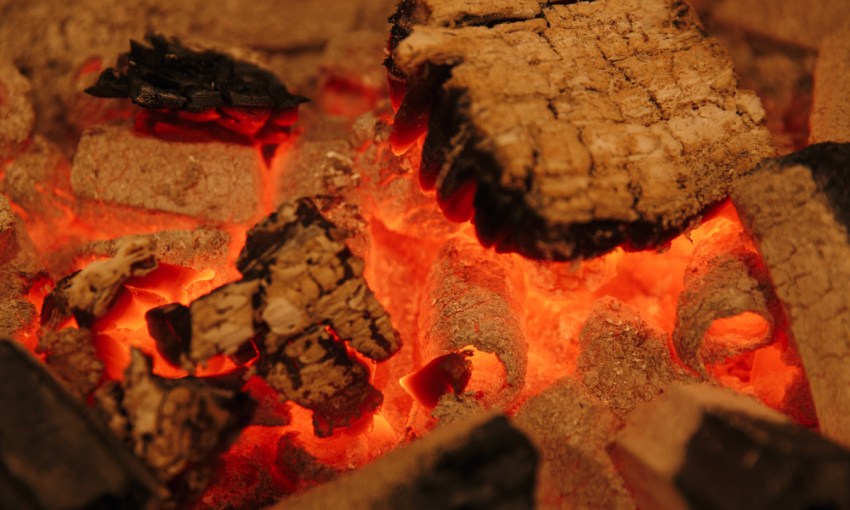 Shōbōsho is a dual homecoming for Adam Liston.

Not only is Adelaide the city in which he cut his culinary teeth, but his first break in the industry, long before starting up Northern Light in Melbourne, was as head chef of Simon Kardachi’s first restaurant – The Melting Pot.

“That was my stepping-stone, really. From there opened up another world of opportunity,” Adam says.

In the time since The Melting Pot, Adam has worked in Byron Bay, Shanghai, and Melbourne, and watched from afar as Adelaide’s food scene developed.

“I’ve noticed in the last few years in particular the radical change of the city,” Adam says.

“Staying in contact with Simon and sort of seeing how many shops he’s opening and how successful he’s been, along with all the other guys, you know, Africola, even Magill Estate doing new things, Orana, Blackwood, even the funky pizza bars like Sunny’s, all of that sort of stuff…. It’s completely different to what it was when I was here.”

After popping up for some guest appearances at The Pot, Adam and Simon saw that there might be a market in Adelaide for what they were producing. 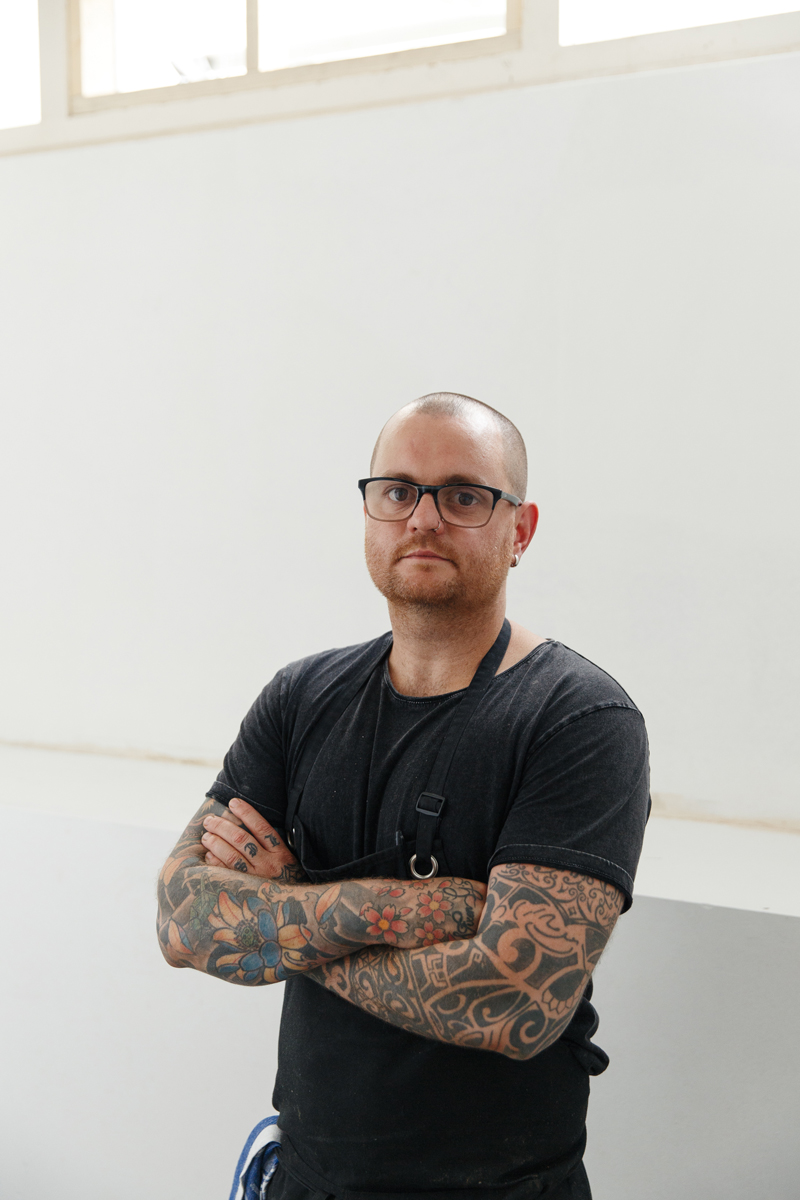 “We were saying after that event ‘Why are we not doing a restaurant together here, there seems to be a market for it?’ And we just stayed in contact,” Adam says.

“I was at the point with Melbourne, with Northern Light, where I was ready to sell, for a bunch of different reasons – competitive city, business partners, time for a change, all of that kind of stuff, and I said to Simon I’m coming back, he said to me that he had been offered a site, which was this site.

“We literally had a beer at Bread and Bone after flying back within a week of speaking to him, and we just on the spot decided we were going to do it.”

This was the moment of conception for what Adam confidently describes as “the best fire line in all of South Australia by a mile”.

“Our pit,” Adam says, “starting with the yakitori pit, is literally a long rectangle pit that you put charcoal into that has a blower valve to increase or decrease the amount of charcoal that you burn, and how quickly it’ll burn, and we cook sticks over that. 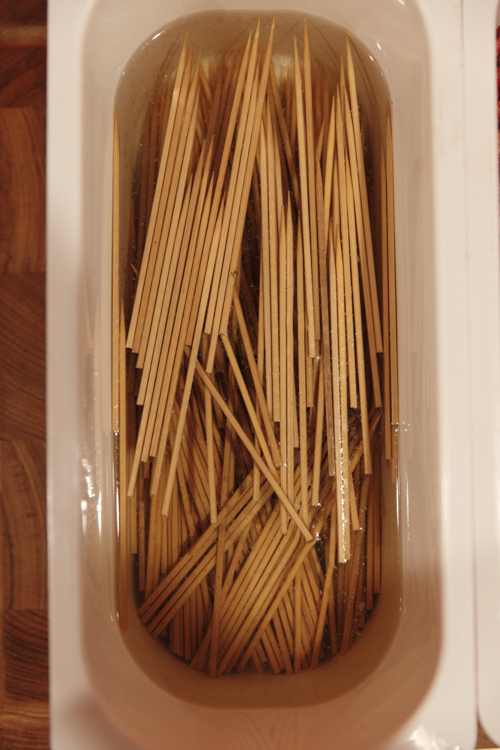 “And then you’ve got a hydraulic grill that we can literally move the grill up and down depending on how hot the coal is… The rotisserie – straightforward; that’s a pretty powerful rotisserie, so we can cook things quickly on it, and the wood oven is probably the tester, like, how do you actually finish food in there and bake things to precision in there.”

As for what will come off of the fire line, yakitori was Adam’s specialty at Northern Light, but the Shōbōsho menu will go beyond simple grilled meats.

“We wanted to do a yakitori-focussed venue, which was really our first kind of concept, it was going to be just that, and then it evolved into… a bit more of a barbecue restaurant, and that was exciting because it allowed me to buy more equipment,” Adam says.

“I think that the concept that we’re doing, it’s pretty new to Adelaide, and I can’t think of an Asian barbecue restaurant – and when I say this, I’m not trying to sound arrogant when I say it, but on the contemporary level that we’re doing.

“The menu’s quite big… it’ll definitely be high-20s, low-30s size menu. There’s a raw bar section, raw bar snack section, which is kind of individual and shared, and then it goes into yakitori kushiyaki – kushiyaki is anything not chicken.

“Then you go into grill robata section, which is more share plates, so steaks, seafood, vegetables; a rotisserie section, which will have a couple of our signature dishes, shared, and then noodles, rice, dumpling… we’ve got a really good selection of handmade dumplings – we’ve got some Chinese guys that are literally employed just to make dumplings… and then a couple of desserts.”

For Adam – bringing this menu back to the evolved version of his home city is an exciting idea.

“There was a real focus, 10 or 15 years ago [on] the top dogs, and the lower, more affordable types of cuisine weren’t really celebrated,” Adam says.

“I remember when I was cooking here 10 years ago, some nights you’d be cooking for five, six people, and it was a fucking joke, whereas now, every restaurant that I’ve been around, it’s good. It seems to be pretty busy… so yeah the culture’s changed.”

As for where he sees Shōbōsho sitting in the broader restaurant scene, Adam says they’re “not pitching it at fine dining end, that’s for sure, but at the same time it kind of fits somewhere in between that high-end to mid-level dining.

“It’s a place that I see people will come because it’s a beautiful place, and there’ll be options for people to have expensive things there – we will have the best Wagyu in Australia, you could spend money there if you wanted to, but at the same time, it’s an accessible restaurant where people could come and treat it in a casual manner.

“It won’t be formal in any way, shape or form, it’s a place that’s going to be funky and cool and loud and atmospheric.”

And from 5pm tonight, you can see it for yourself.