Ross Osmon and Craig Lock have made their plea clear: the State Government must cough up a combined $500,000 and offer a five-year lease extension on the commercial property they manage in order to keep their businesses from ruin.

Without this support, the businesses they run, music entertainment company Five Four Entertainment and live music venue Lion Arts Factory, are six months away from bankruptcy and closure.

“I want this [money] from the government,” Five Four Entertainment and Lion Arts Factory co-owner Craig Lock tells CityMag from within the empty live music venue.

“The public shouldn’t have to fund our survival.

Local music behemoth Five Four Entertainment is responsible for throwing festivals such as the Adelaide leg of St Jeromes Laneway Festival and Spin Off Festival, which staff 10 people directly and 2,250 people indirectly. It contributes $21 million to the local economy, Craig says, but since the COVID-19 crisis began, Five Four has lost 20 shows.

They also own inner-city live music venue Lion Arts Factory, which they’ve run since 2018 and which for two consecutive years took out the South Australian Music Awards’ Best Venue award. The venue hires 40 employees and 500 indirect employees, and contributes $7 million to the local economy. This venue has lost over 250 shows since the pandemic started. 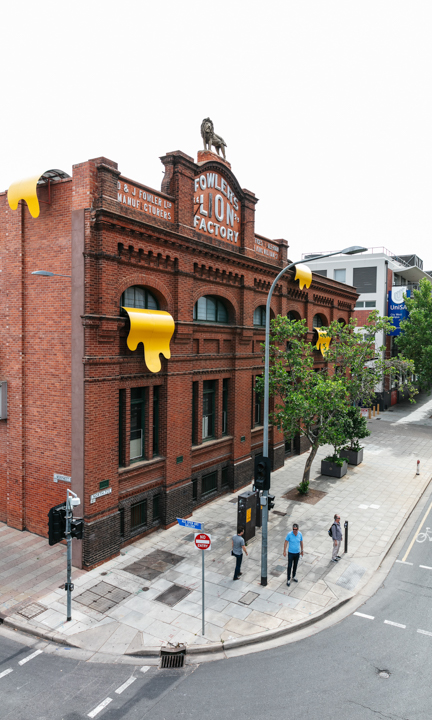 The State Government manages the building Lion Arts Factory is housed within, and Craig and Ross are demanding from the government a five-year lease extension. They also want a $100,000 grant to retain staff, absorb the ongoing financial loss of the pandemic, and have enough money in reserve to recoup losses.

For more than 35 years, the multi-storey Heritage-listed building on the corner of North Terrace has been home to live music, previously housing beloved music venue Fowlers Live.

South Australia’s COVID-19 Transition Committee – the body responsible for issuing new coronavirus restrictions as well as winding them back – has declared dancing and stand-up consumption of alcohol banned in nightclubs and live music venues. A venue’s capacity must not exceed one person per two square metres while standing, and three people per four square metres while seated. Masks must also be worn indoors.

Through these restrictions, the government has clipped the wings of the very tenant they’re expecting to collect rent from, with partial rent relief not offered to those occupying the hallowed music venue, Lion Arts Factory.

Ross finds it “unbelievable” his business is expected to pay full rent to the State Government, who is responsible for limiting their trading opportunities.

“We were given rent relief during JobKeeper,” Craig says.

“The State Government gave every single government building that is tenanted by an external party, whether that’s a government-funded party or commercial business like us, free rent for [the] JobKeeper period.

“When that was over, straight back to full rent, even though at best during that period we traded at 50 per cent capacity.”

No one can say Lion Arts Factory hasn’t attempted to pivot. The venue has hosted plant sales and, last year opened up its green rooms to private parties. This picture: supplied

Craig says under current restrictions (compounded by other operating challenges, such as Victorian and New South Wales bands’ cancelling tours due to their own lockdowns), Lion Arts Factory is trading at five per cent what it could. But the team are fine with restrictions; as long as they’re being reimbursed for the losses incurred.

“We’re happy to be locked down,” Ross says.

“We’re happy to stop for health reasons; we’re absolutely fine with that. But if you can’t open us up as quickly as you lock us down, then we need to get some sort of funding to compensate us for the fact that we’re not allowed to even work.”

When CityMag asked Premier Steven Marshall (also Minister for Arts) why the owners of Lion Arts Factory were not offered partial rent relief when they cannot trade at an optimal level, we did not receive a direct response.

A government spokesperson instead offered a statement, saying the government is an “ardent supporter of South Australia’s live music industry” and is “proud” to be a UNESCO City of Music.

“[We] support the industry through many avenues, most notably the Music Development Office, which helps the development of South Australia’s music industry by supporting creative and business development,” the spokesperson said.

Lion Arts Factory taking out the best venue gong at the South Australian Music Awards in 2019. This picture: Dave Court

“The South Australian Government recognises that the COVID-19 pandemic has severely impacted the state’s music sector, with restrictions and cancellations of events, tours and gigs particularly impacting the live music sector.

“Since the onset of the pandemic, the South Australian Government through the Music Development Office (MDO) has injected a total of $3.2 million directly into the music industry. This has enabled artists to continue to make music while supporting music businesses to develop projects to support recovery.

“This included investment of $500,000 in 2020/21 for the dedicated Live Music Venues Grant Program, through which 28 metropolitan and regional venues were awarded grants of up to $25,000 to host live music from 1 January until 30 June 2021, as a reimbursement of the cost of hiring musicians, sound and lighting technicians.”

Another pressing issue facing Lion Arts Factory, though, is the nearing end of their current lease. As per the terms of this lease, they are expected to vacate the multi-storey, fitted-out property at the end of the year.

Letters seen by CityMag demonstrate Craig and Ross have attempted to seek a lease extension for the last three months. Communications from government representatives say they intend to get a response back “shortly”.

Craig and Ross say they have not seen a lease renewal contract, and are frustrated by the lack of direct communication.

They are requesting a new five-year lease on the property, saying they have proven to be an award-winning live music venue, and further trade would help them climb out of debt incurred.

They also claim to have spent over $500,000 fitting out the venue when they took over the site three years ago.

From their perspective, they’ve sunk a lot of time, money and energy into the Lion Arts Factory, and of the three years they’ve operated on the site, two have been impeded by COVID-19 restrictions.

They argue it would be unviable for them to move the business elsewhere, and without a lease extension, Lion Arts will be forced to shutter.

“We’ve put so much money time and effort into making it what it is now; it’s actually a fantastic space,” Ross says.

“How can we let that go? It just doesn’t make any sense. There’s just no other alternative.”

Craig and Ross are demanding an immediate $400,000 grant be awarded to Five Four Entertainment to ensure they can retain staff, absorb financial losses already incurred, and when restrictions lift, allow the company to run events, which may require millions of dollars to undertake.

The music event company has been unable to run its landmark music festivals, Laneway and Spin Off, for over two years, Craig says. But they have successfully run one of the world’s only COVID-19-safe multi-day music events, Summer Sounds.

Craig believes they may have shot themselves in the foot by demonstrating such a festival is possible. For them, it was a lot of stress and risk for limited return. They would not do it again.

“It was the hardest festival we’ve ever done,” Craig says.

Ross adds at the end of the day, they only made 10 per cent of what would normally be made on an event that size.

“And at any moment in time that could have been closed – and through no fault of our own, through restrictions we could have lost everything,” Craig says.

“We did a good job and it was an event that happened, but it was financially devastating.”

Throughout the COVID-19 period, Five Four Entertainment was forced to dip into its savings to retain staff and pay bills. That nest egg is usually used to fund the company’s next festival, to ensure contractors and clients are paid on time, regardless of ticket sales or external forces.

Craig explains you need a base level of cash to get “the wheels moving” and it’s impossible to run a festival responsibly otherwise. He wants this money to be able to start work on a future festival, and to pay for the opportunities lost due to unworkable COVID-19 restrictions.

Five Four Entertainment has forfeited two years of revenue with its usual festivals on ice.

“We’ve received nothing in exchange for that,” Craig adds, while expressing frustration at the red tape surrounding the State Government’s current grant scheme.

“How are we supposed to get approved COVID management plan to run the festival that we need to survive, when it’s actually impossible to do so?”

While directed at Premier Marshall, it’s expected the document will be presented to South Australian Parliament for consideration.

The Premier did not respond to our direct questions as to whether the government would offer any additional funding or a property extension to Five Four Entertainment or Lion Arts Factory.