Everything we know about the imminent changes to liquor licensing

Just the facts (and some hints as to whether or not your Bloody Mary is going to cost more). 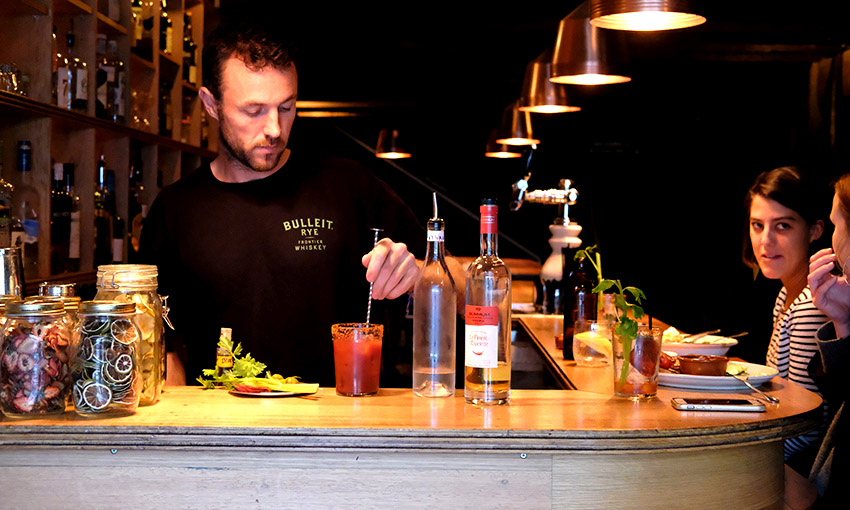 Last Thursday, May 23, a statement was published on Department of Premier and Cabinet’s website outlining a suite of increased “fees, fines and charges” to be rolled out this year.

The statement, issued by Treasurer Rob Lucas MLC, spends a good portion of its 1,497 word count lambasting the “limp lettuce leaf of a fine structure” left by the previous government and the intent of the Marshall Liberal Government to, “whack… brainless idiots who blatantly thumb their nose at the law”.

Here’s everything we know about those new fees and how they will affect Adelaide’s small bar scene.

When the story broke

Australian Associated Press (AAP) journalist Gabriel Polychronis wrote a story that was picked up and published by national media from SBS to the Fairfield City Champion. The headlines were more or less the same, ‘Licence changes may hit Adelaide bars’ and Gabriel’s interview with Bank Street Social co-owner Simon Orders who – the story says – was “expecting to see his business’ liquor licensing fees grow from $1600 to more than $6000.”

#Adelaide‘s burgeoning small bar scene could take a hit when they are required to pay thousands of dollars more per year for their liquor licences, #South Australia’s opposition government says @AAPNewswire #saparli https://t.co/PYbrfOiv1L

Bank Street Social opened in 2014 with a Small Venue Licence (SVL). It has subsequently re-classified as an Entertainment Venue Licence and extended its trading hours and capacity. The SVL limits bars to a 120 person capacity and precludes them from operating beyond 2:00AM. Bank Street Social now has a bigger capacity (more people) and trades later at night – the venue is open until 4:00AM on Sunday.

This story – disseminated via AAP Newswire and then shared more broadly on social media – conflated various licence categories and elements of the new liquor licensing fees to create interest in these legislative / administrative changes.

However, the article which broke the story about the South Australian Government’s changes to liquor licensing and the implementation of a ‘risk-based’ fee structure was first published by The Adelaide Review.

The Adelaide Review article takes in a far broader scope of the sweeping reforms to liquor licensing in this state. The Review article correctly reported that under the new scheme liquor licences for SVL holders would “triple.” It should – however – be noted that tripling the current $115 charge SVL holders pay to $425 is far short of the “thousands of dollars per year” the AAP article implied Adelaide’s small bar scene “could” incur as a result of the changes. The maximum an SVL will pay under the new scheme is $425.

On a snarky note, the image used for the AAP story was of the Uraidla Hotel – a completely different licence class to anything near ‘small.’ Furthermore, as a Hotel Licence not trading on Hindley Street and not trading after 2AM the Uraidla pub’s licence fee will drop by around $300.

Not a small bar. Not paying more. We understand The Uraidla Hotel will pay less for their liquor licence under the new fee scheme

These liquor licensing changes date back to 2016

Changes to the fee structure were developed following the review undertaken by retired Supreme Court Judge the Hon Tim Anderson QC, which recommended implementing a risk-based annual liquor licensing fee structure and a thorough analysis of the current fees being paid at all levels of licensees. While the report was released in 2016 and some recommendations actioned, the former Government did not begin implementing any fee changes before the 2018 state election, leaving this to the new Government.

Interestingly, when speaking to a liquor licence and insurance specialist who has helped hundreds of liquor licence applications, CityMag was told that annual fees for liquor licences were only introduced around the 2012-2013 financial year.

The new licence fee structure purports to adopt a “risk loading model” for hotels and other licensed premises, whilst also considering the other fees payable by licence holders across the state. The new fees are set to come into effect for new licences from November this year.  Existing licences transitioning to the new system will not be affected by the fee changes until they are renewed in mid-2020.

What “high risk” means in the context of these fee increases

Right now licence holders can go to this website and enter the details of their licence and discover what they can expect to pay under the new fee regime.

The energy this story received initially was due to the increase of the small venue licence from $115 to $425. What was underreported was that many other licences have been dropped – also – to $425.

The changes to annual liquor licensing fees defines risk as pertaining to A.) Hindley Street and B.) Trading hours, where trading after 2:00AM incurs exponentially higher fees.

Currently Bank Street Social are open until 4:00AM on Sunday, which means their licence will cost between $6,425 – $6,531.25 depending on their capacity.

The fee hike is exponential the later a venue trades. In an Advertiser article dated May 29, owner of Sugar nightclub, Driller Jet Armstrong, told the newspaper he is “now being forced to consider closure” as a result of these fee increases.

Sugar’s Special Circumstances Licence will no longer exist. Indeed the current 12 licence categories have been reduced to eight categories. Udaberri originally tried to classify as a Special Circumstances Licence only to be told by Consumer Business Services that this licence category was no longer being granted after the owners had invested up to $30,000 with a legal firm to prepare and lodge their application.

This expense, coupled with the seemingly arbitrary nature of the refusal to grant a special circumstance licence, helped pique public interest in the issue and encourage the Labor Government to create the wholly new Small Venue Licence.

Sugar will instead, from November, hold an On Premises Licence. Nothing except the name has changed – oh, and the additional $15,000 it will cost them to trade.

Driller out the back of Sugar in Rundle Street East

How did the Government equate risk with a fee increase?

The liquor licensing fee changes are relatively simple to comprehend. Finish trading by 2:00AM and you will stand to save money under the new fee. The only licensees who will pay more for their licence are those holding a Small Venue Licence, whose fee goes from $115 to $425 per year.

A spokesperson from the State Government tells CityMag the exponential increase in fees associated with late night / early morning trading was based on findings from Tim Anderson’s 2016 report.

In a written statement, the State Government says, “the new licensing regime reflects one of Mr Anderson’s central findings that the annual liquor licence fee structure should ensure licensees make a fair and reasonable contribution to the cost of regulating the liquor industry having regard to the risk and effects caused by alcohol within the community, and especially increased levels of domestic violence.

“The new fee structure strikes a balance between supporting a vibrant hospitality industry and protecting the public by encouraging a safe drinking culture by making sure that venues which are open late, based in a high-risk location or engage in activities that increase the potential risk pay their fair share to support activities that promote compliance and public safety,” the statement reads.

Response from the Industry

The fee increase for small venues is so small as to be “insignificant” to those venues we surveyed. However, in each case, operators of the small venue licence were disturbed by the “potential path this may take us down”.

Ash Wilson co-owner of Sunny’s Pizza (which is licensed as a Small Venue) says he’s concerned most by how the media is covering the issue. “No one is questioning the motive or reason for the hike nor even asking ‘What and where is this high risk area?’

“Sure 2:00-5:00AM there is potentially a high level of incidents occurring and I understand some venues may be ‘high risk’ but what about great operators like Rocket Bar who would have little-to-zero incidents most weeks, even when they operate close to problem venues who would have multiple incidents weekly. The stupid thing is all of these venues (even Sunny’s) have data for this and are required to file ‘incident reports’ when instances occur.”

The fact that Sugar is outside the ‘high risk’ zone but must still pay dearly for their licence to trade until 5:00AM is where the government’s approach to the risk assessment needs further interrogation.

The spokesperson for the State Government says, “a venue who decides to trade until 4am instead of 5am can significantly reduce their fees, however that is a commercial decision for them.” A commercial decision based on an unexplained financial metric is not as clean cut as the government might be suggesting.

“I’ve sat in, and spoken with government and police and council for five years,” says Driller, “and there was never any discussion about a fee increase of this magnitude.”

The blanket approach to licence holders is what disturbs Ash, who – aside from running Sunny’s Pizza – DJs at nearby nightclubs, some of which are on Hindley Street.

“Why is there not a systematic process to establish who is high risk no matter how late you trade?,” he says. “If Police think they have the ‘facts’ and ‘numbers’, then use them to implicate the venues who are the worst abusers of that and label them ‘high risk’ rather than a blanket approach to the whole city.”

As far as passing these costs onto consumers the small venues CityMag spoke with on Peel and Leigh Street (once we explained their licence fee would only rise by $300) said they had no intention of increasing the price of food and drink to cover it.

Our first concern when hearing of the liquor licensing fee hikes wasn’t for our beloved Udaberri, Baddog, Pink Moon Saloon and Proof, but for Café de Villis. They’re open 24-hours a day and serve beer and wine all the time. However, the fact they serve food the whole time means they operate in an entirely different category and stand to pay as little as $375  for their 24-hour liquor licence.

When speaking with Julie Peter of the Crafers and Uraidla Hotels about her pub being featured in the national news, she was struck by the specificity of the fee hikes and recalled a licensing quirk of a time in Adelaide when pubs used to have to feed people in order to serve them alcohol after a certain hour.

“Maybe they need to go back to what they did in the ’80s,” says Julie. “What they used to do was lock the doors and feed everyone. You’d get a stamp or a wristband and some places would put on an amazing spread.

“The Austral,” Julie continues, “where I spent most of my time, served up muck. But you had to eat it – ‘eat your dinner’ the bartenders would say – in order for them to serve you another drink.”

This story has been updated.

Subscribe to CityMag to stay up-to-date with this and every issue important to downtown Adelaide.