Yiasou George opens on Wednesday 15 May, serving food straight from its wood-fired oven to your table, just eight weeks after the very same space was a completely different restaurant.

Charlick’s launched here in September last year. Owners Joshua Talbot and Oliver (Ollie) Brown closed it on 17 March this year when head chef and mastermind behind the Charlick’s concept, Blake Drinkwater, told them he would be leaving at the end of the Adelaide Fringe period.

CityMag arrives on a Saturday night – the weekend prior the new restaurant’s official opening – to photograph the finished thing. The cold bite of a late-autumn evening that’s clung to our noses and ears soon melts away when Ollie opens the door and shows us inside.

Tins of smoked mackerel, jars of capsicum in oil and odd-shaped bottles of liquid sit at eye-level as you enter Yiasou George. The shelves of weird and wonderful foodstuffs draw your gaze around the bend of banquette seating (formerly a table top in the Charlick’s iteration) to the hearth at the back of the restaurant. The newly installed wood oven is blazing.

“Three hundred,” says a man in blue baseball cap with ‘Pizza’ embroidered on the front and ‘Roberta’s’ on the back. The man turns back to the oven and points his infrared thermometer at the bricks next to the redgum fire. “Three-twenty,” he says, smiling.

“The whole restaurant concept around Charlick’s was meant to be around the chef and the food, so when Blake told us he’d be moving on at the end of Fringe it meant the restaurant would have to change, no matter what,” says Ollie.

Yiasou George comes from a different chef, Nathan Sasi – the man wearing the Roberta’s baseball cap – who was brought on by Ollie and Josh as executive chef for their group of venues, which includes NOLA next door on Vardon Avenue, Anchovy Bandit out in Prospect and The Stag Public House. Nathan has guided the concept for Yiasou George based on his experience cooking in Sydney at restaurants such as est. and Nomad and his own venue – Mercado.

CityMag introduced you to Nathan last month when reporting on his plans to open Leigh Street Wine Room in the not too distant future. Presently though, Nathan is vigorously applying pressure to a rolling pin and a small white disc of dough. He gets the disc to spread out to nearly 20cm in diameter and then picks it up and tosses it onto the bricks inside the roaring-hot oven. 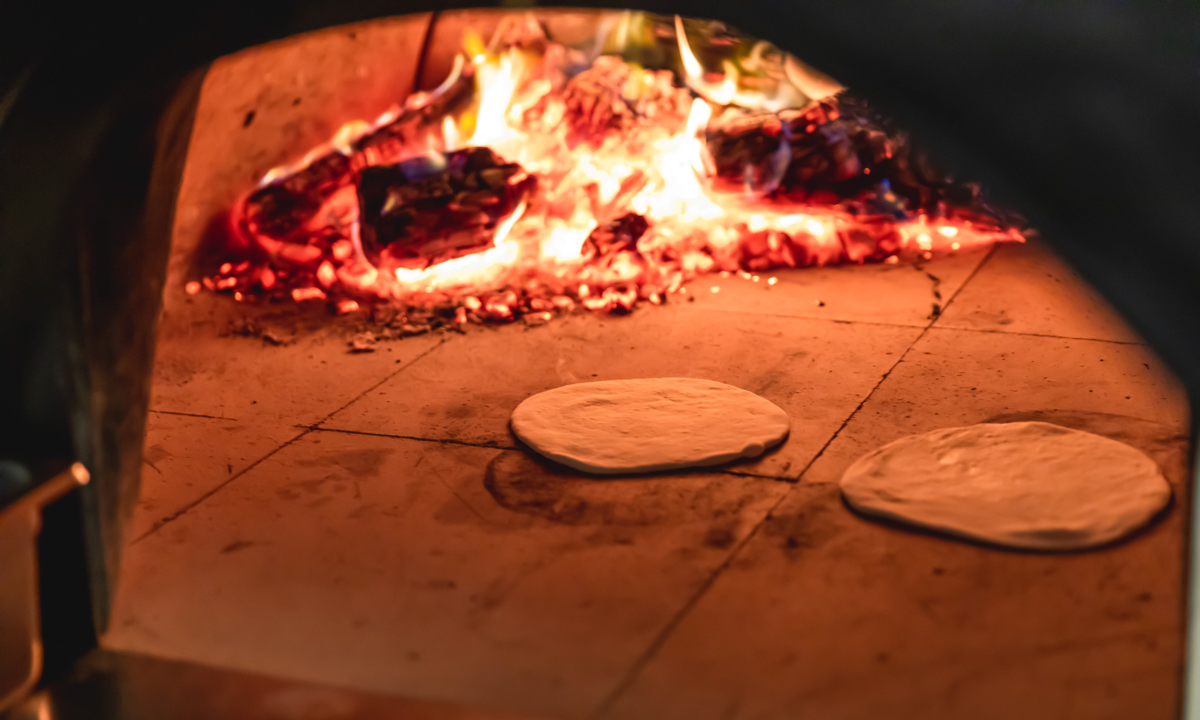 “When I was developing the recipe for this pita, I was trying to replicate the fluffiness of a scone,” says Nathan. “There’s butter, oil, salt, milk – I really wanted to get the pita light and fluffy.”

The little white disks instantly steam in the hot oven, then begin to bubble until they’ve inflated like a small basketball, like the ones Pizza Hut used to give away for free.

Served straight from the oven – wrapped up in a linen cloth – the pita slowly deflates before it arrives, uncut, at your table, with an assortment of house-made dips.

The pita is of an entirely different level to anything we’ve sampled in an Adelaide restaurant previously. The bread is soft and savoury but with an aroma of sweetness that is, indeed, reminiscent of a scone. We slather on the baba ganoush and the dark brown hummus. The hummus is garnished with whole chick peas that pop and crunch in our mouth as an extra delight.

We can’t help but tear off yet more fresh and still-steaming pita, dunking large wads of bread directly into the dishes before us, now picking up velvety-smooth, luxurious and pink taramasalata and salty-sweet tzatziki.

Do not underestimate this bread. 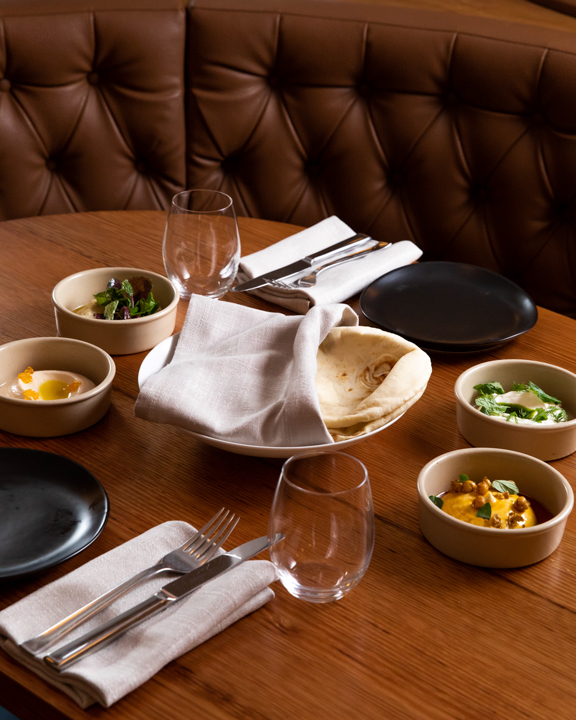 Do not underestimate this bread

A fixture of Charlick’s, and taking more of a leading role in Yiasou George, Jack Booker sets down a couple of drinks for us to try while we wedge fistfuls of bread with gooey dips into our mouths between photographs.

“My favourite dish is actually a fried one, the fried quail Nathan does is just incredible,” he says.

The drinks Jack has brought over from the bar are twists on classics, a Coco Americano and iridescent dill gin sour. Campari was always going to feature in a Mediterranean-inspired taverna like this, and the Yiasou George take on the Americano does not disappoint.

“You know what we should do,” says Ollie to Jack. “We should toast the coconut in the wood oven.” Jack likes the suggestion and notes it down.

Yiasou George is still a work in progress, there’s some light fittings that need some tightening and few spots of wall will no doubt get a bit more paint before the official opening on Wednesday, but the casual atmosphere created here through long-time collaborators Sans Arc Studio and Peculiar Familia, means this eatery is ready to jump off.

And if you’re in the restaurant on the right night, at the right time, you might even be offered a complimentary shot of ouzo for an added bit of authenticity. Opa! 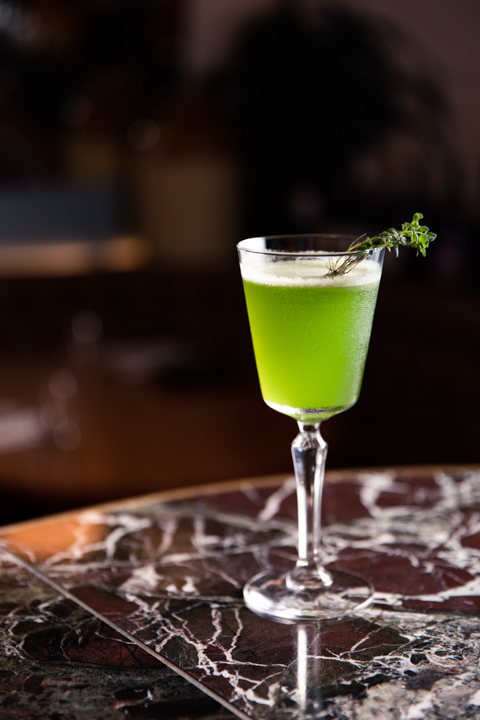 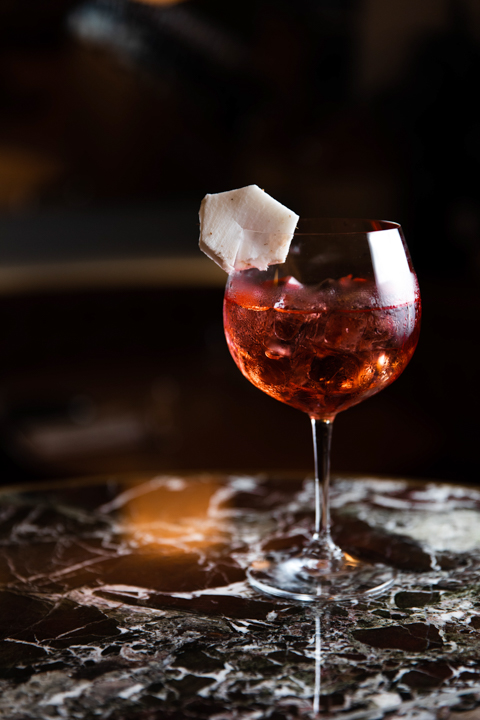