It’s been a busy couple of weeks for Tom Smith and his business partners, Kyle Young and Steph Gibbs.

Open seven days from 11:30am ’til late. Open earlier for special sporting events.

Stay tuned to their social media for updates.

The concept underlying Wing It is based on Tom’s own travels along the West Coast of the USA and his time living in Vancouver, Canada.

Having operated in the food and beverage space now since 2014 – debuting with La Rambla and then Therapy Cocktail Bar – Tom was surprised to find that no one had brought the American sports bar concept to Adelaide.

“It kind of always blew my mind a little bit to be honest,” he says.

“We have had sports bars, but to be very honest, I don’t think anyone’s actually nailed it. Obviously the Arkaba’s a great spot, the Casino’s a great spot, but it’s just not that classic American environment,” says Tom.

After “a lot of mucking around” with Foxtel, and with the aid of a sound engineer, each of the TV screens spread throughout the space’s many nooks and crannies will have the ability to be tuned to individual channels.

“We’ll only have sound on for main events, [but] if someone comes in and goes ‘Hey man, I was really wanting to catch the billiards,’ we’ll swing them around and put the sound on for them [where they are],” Tom says.

“But if you’re not looking at the TVs, it will still just feel like you’re in a bar.”

The approach of Tom and his business partners conceptualising their venues is simple, “we go ‘Where would you want to go?’ and then we break it down from there,” Tom says.

Wing It, though, is the ultimate distillation of Tom’s own interests.

“Everything I love is all here,” he says.

“I kind of want you to feel like, especially with staff, you’re seeing someone that you kind of know but haven’t seen in a while. I want our staff to be having fun with the customers as well. I might be wearing a Cleveland Cavaliers hat, someone can give me a hard time about that, and I’ll give it straight back to them.” 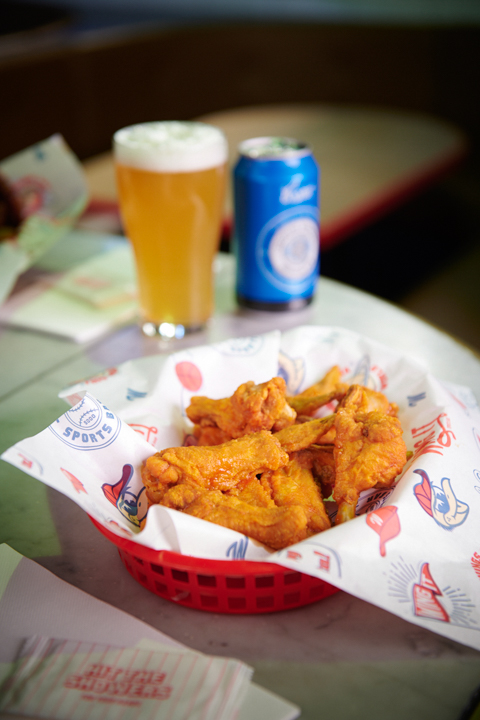 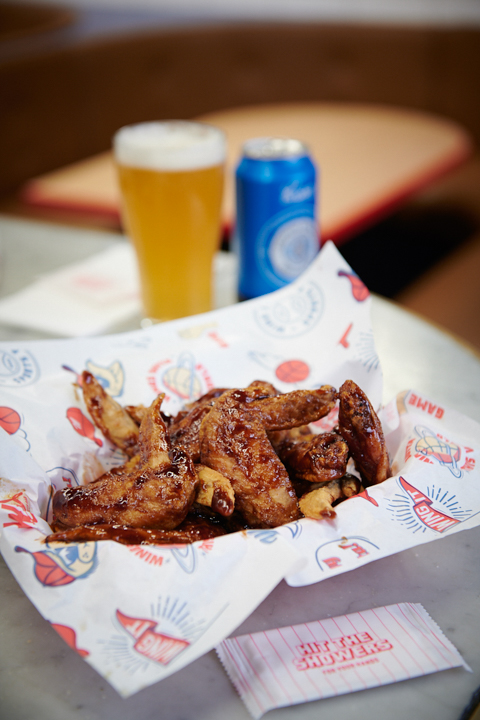 The food menu has started small but will expand in the coming months, designed collaboratively between the group’s executive chef, Jamie Carter, and Wing It’s head chef, Winston Halliday.

Chicken wings are the main fare, sold by the half kilo or kilo, with a vegan almond milk and cauliflower variation also on offer (the chicken is sourced from Something Wild). The range of eight sauces also includes plenty of vegan options.

Beer is sold in “Super Size Me” fashion, Tom says, with pint, imperial pint, and pitcher sizes available. Australian and American brews are available, with craftier options like Mismatch and Balter sitting alongside Hahn SuperDry and Coors.

Wing It will also have brews from Blue Moon, Kona, Brooklyn and Pabst Blue Ribbon available.

Wine is strictly from South Australia, and the spirit offering has deliberately been kept basic.

“We’re not a cocktail bar and we’re not trying to be. We will have a Margarita, an Old Fashioned and a Negroni on to start with. We may add a couple more, but it’s definitely not our focus whatsoever,” Tom says.

If you are partial to a pint of Coors, Wing It has arranged a Coors for a Cause agreement with Coca-Cola Amatil, in which 50 cents from every pint, $1 from every imperial pint, and $1.50 from every pitcher will be donated to Hutt Street Centre, as will all profits from the bar’s pool table.

“Homelessness is one of my personal [causes]. As I said, this whole place is just a little bit of me, so that’s something I’d like to get involved with a little bit,” Tom says. 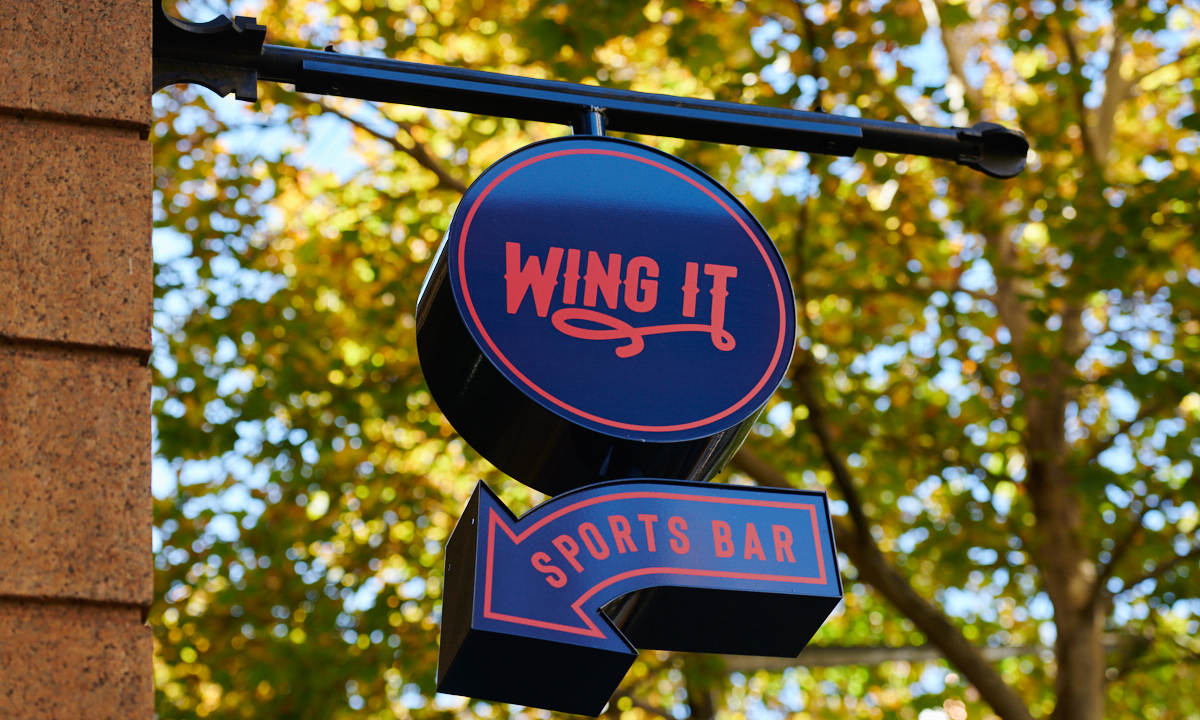 “They’ve done everything from coasters, uniforms, menus, the interior colourways… Everything that’s got a branding on it, or a colour way, they have done,” Tom says.

“I did want to keep it bright, I didn’t want to have that TAB feeling at all – we’re not going to be betting or anything like that. I just wanted a bright, fun environment for people to go and just watch a game, smash a beer.”

“We knew it would be a good working relationship from day 1 during the kick-off meeting when the NBA shit talking started,” Jason laughs.

“It also helped we were all on the same page with the brand direction. We spoke at length about the concept and how the need for it was ever growing in Adelaide.

“We decided to brand the bar as if it was its own sporting team. Giving it an identity that can be used in many different ways. This idea came from modern NBA teams who have several iterations of their branding from logos, jerseys and sometimes even colours! Every piece of branding represents the team and is usually very iconic.”

Tom has been overrun with Facebook and Instagram messages for bookings since long before the bar opened, which he hopes is a sign the Wing It concept is one that will resonate in Adelaide.

“I think this is just a little bit of the market that’s been missed over the years. We’ve just jumped in on it – hopefully at the right time,” he says.

Wing It officially launched on Wednesday, 15 May, and is open seven days from 11:30am until late, occasionally opening earlier for special sporting events.