The former Midnight Spaghetti head chef will ‘flip the old pub menu on its head.’

One year on since the dust settled at the remodelled West Oak Hotel, the Hindley Street pub is changing up its food offering, bringing on former Midnight Spaghetti head chef, John Stamatakis.

John has long been a fixture of the East End, having worked in the ever evolving Grenfell Street space next to the Crown and Anchor through many of its guises – iterations of Little Miss, Superfish, before taking the head chef role above the Cranker.

West Oak Hotel is open for lunch and dinner Tuesday to Saturday.

It was while working at Little Miss Crab Shack that John and West Oak’s Hugo Pedler first met.

“Hugo and I met a few years back at Crab Shack and have been good mates since,” John says.

“I stuck around for more iterations of that chameleon property and Hugo headed off on a series of other projects.

”After a few happy years east Hugo suggested getting the band back together on the West Side. It was a good time for me to make a change and I immediately agreed.” 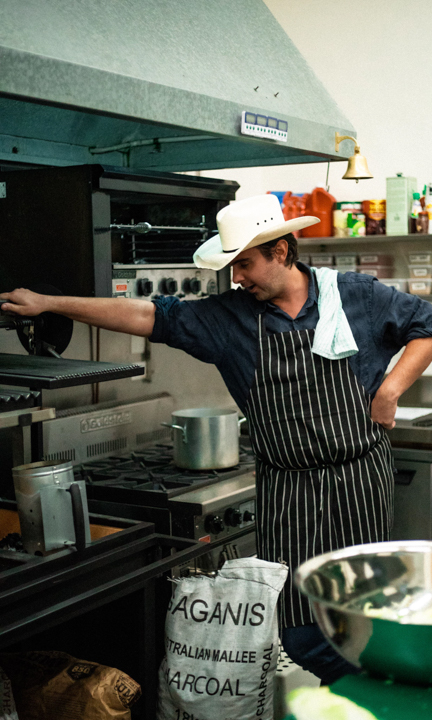 Working on a new direction for the pub has been exciting, Hugo says.

“West Oak is flipping the old pub menu on its head,” he says.

“New menu items will be thrown on the coals, not in the deep fryers!”

Hugo points to the new menu’s kangaroo burger with West Oak’s special sauce, and a panko crumbed chicken schnitzel with sriracha slaw as indicative of the venue’s new direction.

“The pub didn’t have much of a kitchen to speak of originally so we’ve spent a bit of time and money installing something that better compliments the improvements made to the rest of the venue,” John says.

“West Oak has an interesting mix of clientele with its location within the uni and close to the hospital… I’m looking forward to trying some new things and having a bit of fun with the menu and hopefully breathing some life back into the West Oak Deli. It helps that I’ve got one of my long term partners in crime with me in Adam Robinson (another Crabshack alumni), it’s always great working with mates!”

West Oak Hotel is open Tuesday to Saturday for lunch and dinner.