Before you reach for a stock-standard Savvy B, consider the world of whites out there waiting to be explored. The Fruitful Pursuit has gathered together five white wines made in an "old-world style with a new-world steez", perfect for more considered summer sipping.

There’s much more to white wine than we’ve been led to expect.

You can also see The Fruitful Pursuit’s selection of high-five red wines and skin-contact white wines at the links.

The approach to white winemaking is becoming ever more relaxed, particularly amongst the artisans we embrace, who channel more creative and intuitive flare than ever before.

A winemaker’s use of whole bunches has become more commonplace – with the fear of using grape skins and stems subsiding, allowing for the nuanced aromas and textures they impart, even if only used a touch.

The hard-line application of science, often used to wrangle wine and control any possible outcome, is now more selectively applied. Rather than sterilisation, the wines are allowed to exhibit the array of naturally occurring delicacies many of our established white berries want to share with us.

Even the consumer’s obsession with appearance – the limiting acceptance of only liquids with an absolute and crystalline degree of clarity – has softened.

What we’ve observed and have gleefully highlighted in the bottles we’ve selected below are wines we would coin as ‘old-world style with a new-world steez’.

These are white wines that more closely resemble styles made from generations past. Wines mindfully made from known grape varieties – and, more importantly, for the most part mindfully grown – using all manner of technique at the craft’s disposal.

On a similar but opposing tip to our selections from last week, chill these wines down, then leave them out of the fridge for 10 minutes.

That bone-chilling, beer-fridge temperature we’re accustomed to is exactly that: a temperature for beers. There are subtleties at play in these wines you won’t want to miss, and are well worth the wait for a slightly warmer temperature. 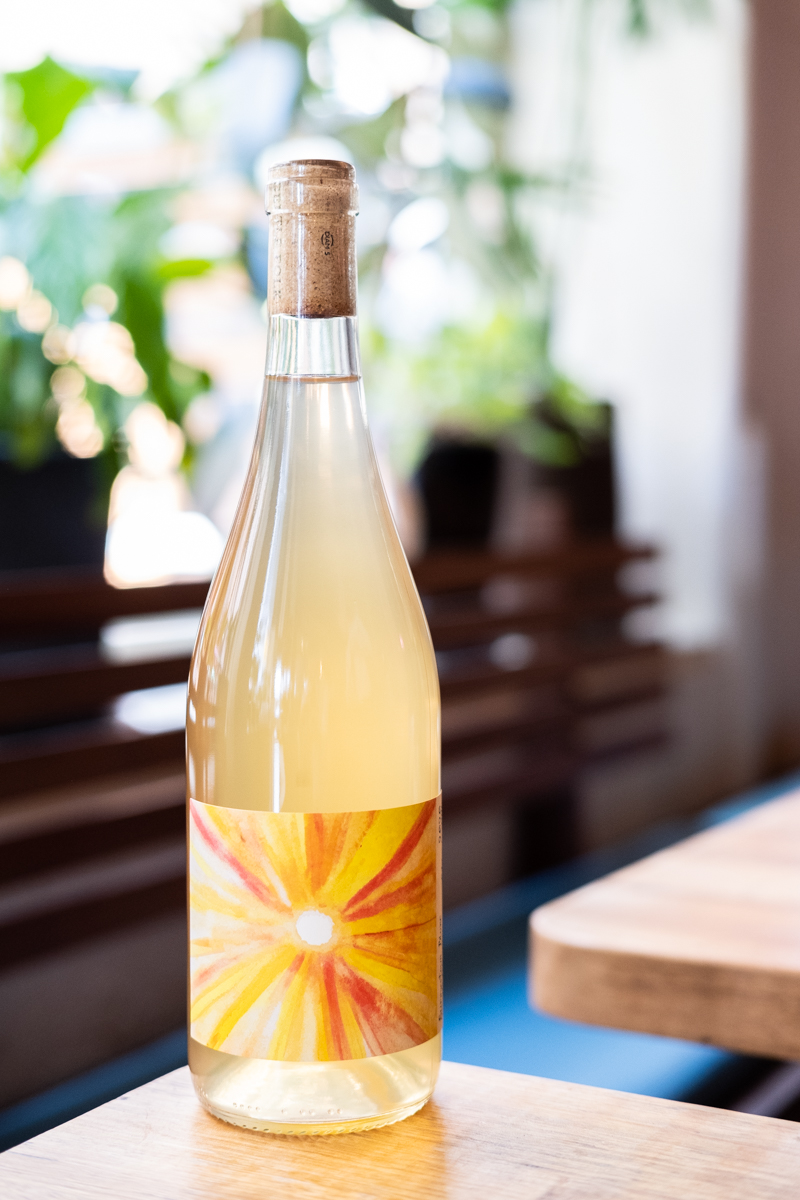 As of the 2019 harvest, Gareth Belton’s taken on a belter of a vineyard in Summertown, growing some of the most outstanding organic Sauvignon in the Adelaide Hills.

The Summertown Blanc is comprised of a few components: a few get-to-know-you experiments that Gareth made separately to see what the fruit wanted to say, then slung back together into one damn delicious beverage.

It’s a bit fleshy in the glass; a light lemon-kissed cloudiness that softly says ‘drink me’. We should probably say it outright, this is nothing like ‘Sauvignon Blanc’ as your Auntie Helen knows it. Ripe nectarine, some honeydew on the nose. Green pear. It’s broad and quite powerful in flavour, with a texture that strikes the sides of the tongue. Lovely, easy-citrus acids that linger. Lick of pineapple juice. Yum.

We could have thrown this in with the skin-contact whites we’ll be featuring next week, but felt it far too friendly.

To quote a dad who spent thirty years only drinking reds (and undoubtedly dodging Savvy like the plague): “I absolutely like it.” 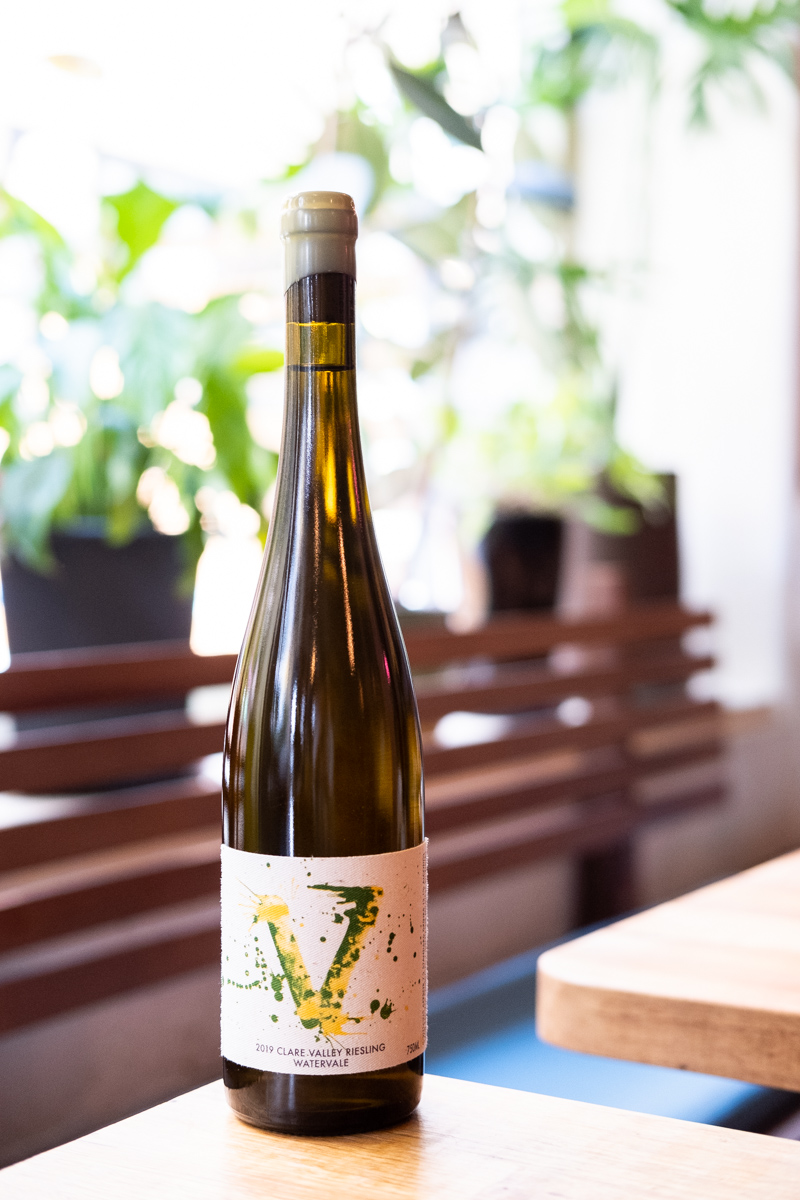 Michael John Corbett’s revered for two South Australian treasures: Blewitt Springs Grenache and this enamouring expression of Watervale Riesling, from a plot we’re sad to hear he’s been forced to let go of.

Vanguardist ‘CVR’ is a boundary-pusher, no doubt about it. Scents of meringue and a bit of waxiness on the beak. Lemon myrtle. Then more lemon—pith and juice and dried stuff too—wraps around the tongue nicely. It’s also chalky, maybe the gentle foot-trodding of skins is pushing this up. A fleck of spritz gives it lift. It’s serious stuff: powerful and focussed but beautifully understated.

This will change the way you feel about Riesling. 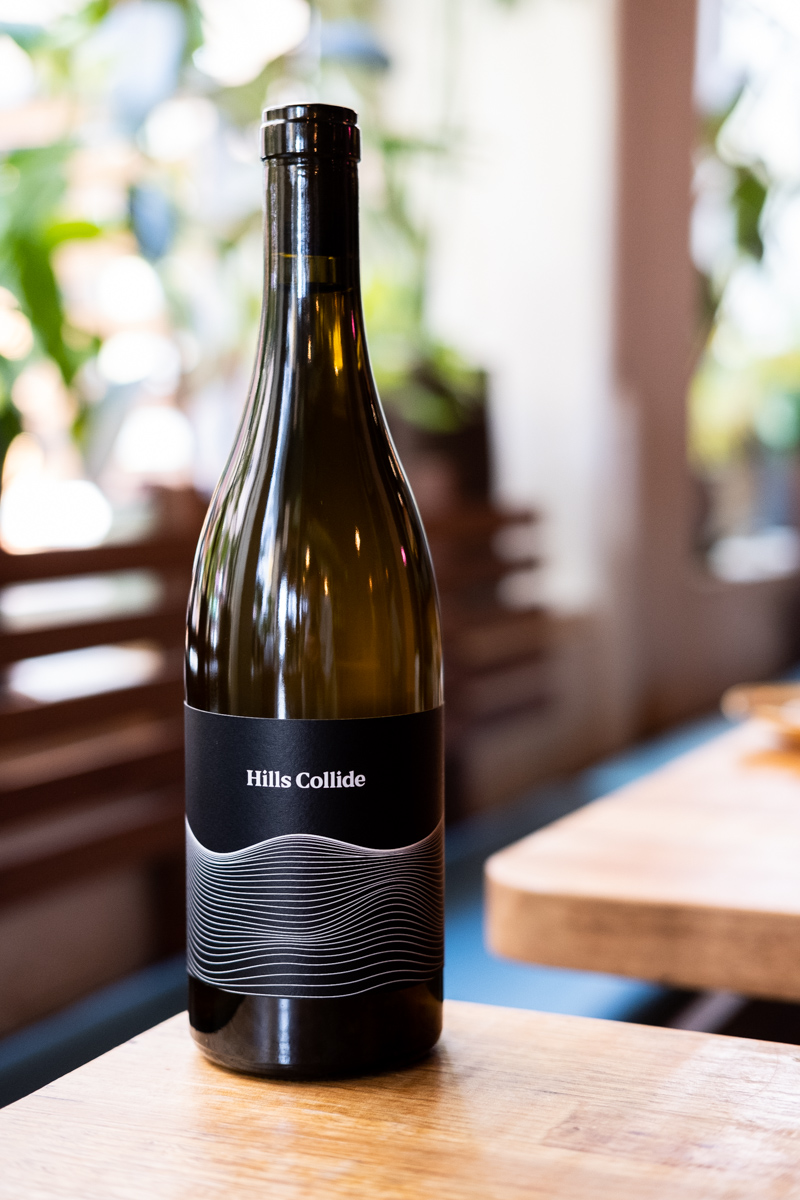 Trippy. We weren’t surprised to hear this was one of those messy room blessings: a treasure you thought you’d lost forever that’s taken its own new shine.

A high quality yield of Kuitpo Sauvignon was plucked, fermented and left to rest, un-topped for who knows how long. The nose is loaded with obscurities. Walnut. Brazil nut. All the nuts. Aldehydes; all the good kinds. Overripe citrus. The palate is extraordinary. Such a dirty sexiness about it. Latherings and layerings of things you probably can’t phrase nicely, but want to bury your face in.

All this derived pleasure, dear friends, is from the wine’s interaction with oxygen, from the consequent and protective ‘flor’ it develops in an attempt to preserve it from harm. Harm’s way has a funny way of enlivening the senses though, amirite?

Very little of it left, anywhere. 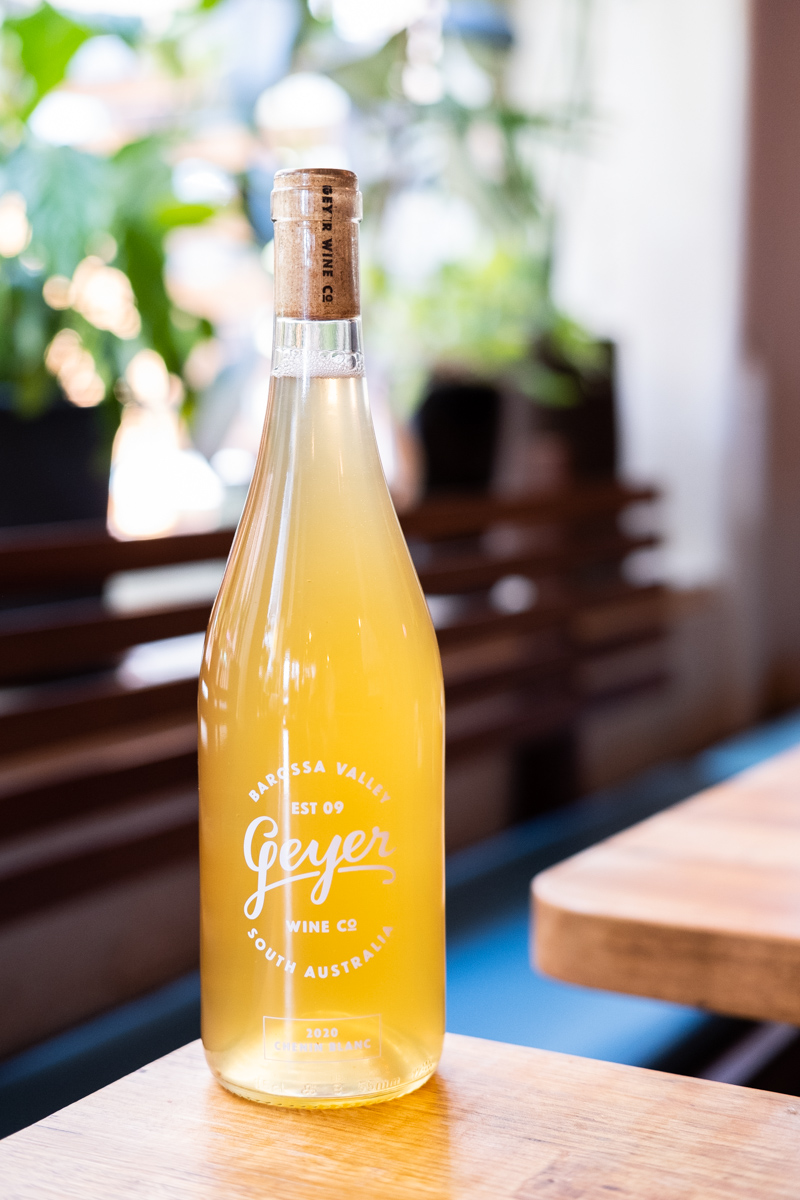 Some candy in the nose: those lil’ sherbet-filled lemon lollies. Marmalade—from the whole-bunch portion, we’d presume. Aromas of orange, zest and juice. Is that galangal? A nice mineral edge, likely from the three to four metre depth of sand it’s grown in. It’s saline too. Keeps you coming back.

We’ve developed such a hankering for Chenin lately—this is a great segue for those who haven’t bounced in yet. 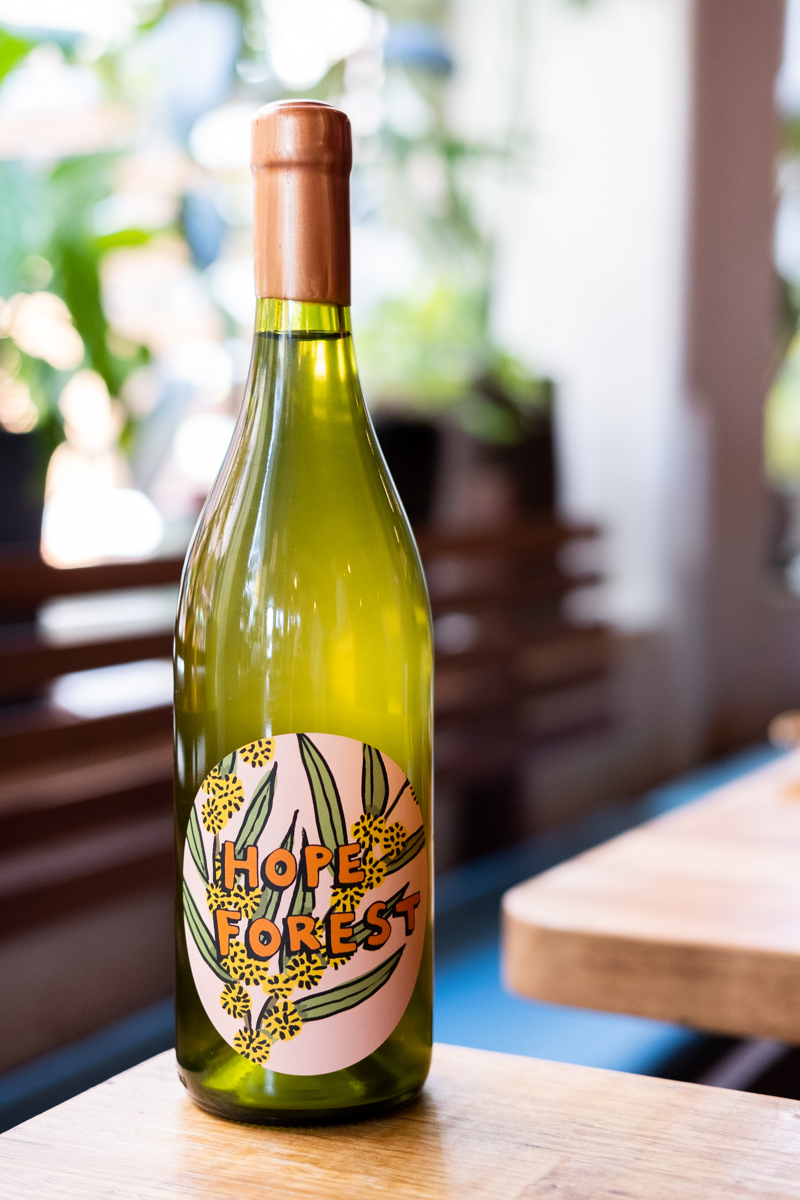 Made from some beautifully-grown organic Sauvignon in Hope Forest.

A more varietal nudge from young Louis Schofield. That is to say, this looks a bit more like the Sauvignon we know but more layered and complex in its savouriness. This opens up beautifully, if you can spare the patience; the barrel work shows more – a slight doughiness on the nose, a light creaminess on the tongue. So refreshing to drink. Dribbly, juicy pears. Touch of pepper. Slurp level: melting Icy Pole™ .

The team at Gondola Gondola, on the corner of Peel and Hindley streets, have politely provided the backdrop for our high-five white wines for summer, and also offered a pairing suggestion for anyone in the mood for a well-made white. Chef Tuoi Tran plated up whole barramundi with black pepper, turmeric, kale, garlic chips, chilli dressing and green apple slaw; and a whole grilled squid with smashed avocado, ground coriander, long beans, quinoa and green chilli dressing. 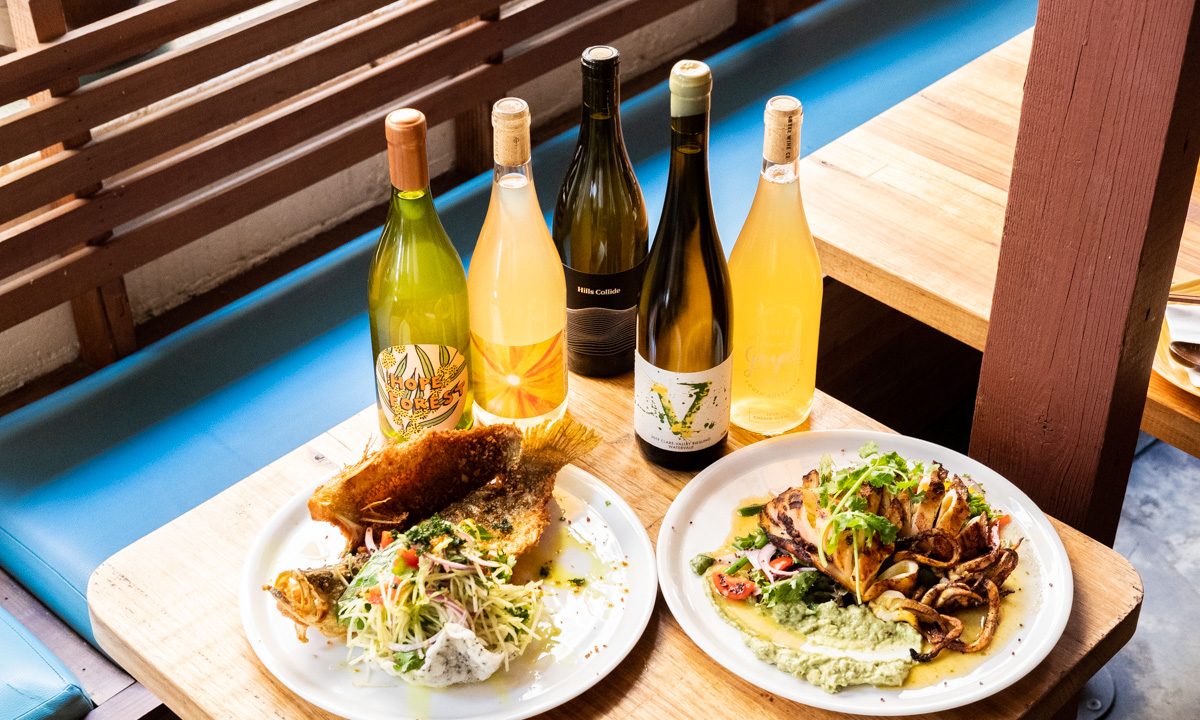