Bring a bit of texture to the Christmas table this year, with The Fruitful Pursuit's selection of five high-fivable skin-contact white wines perfect for pouring amid the late-December summer heat. 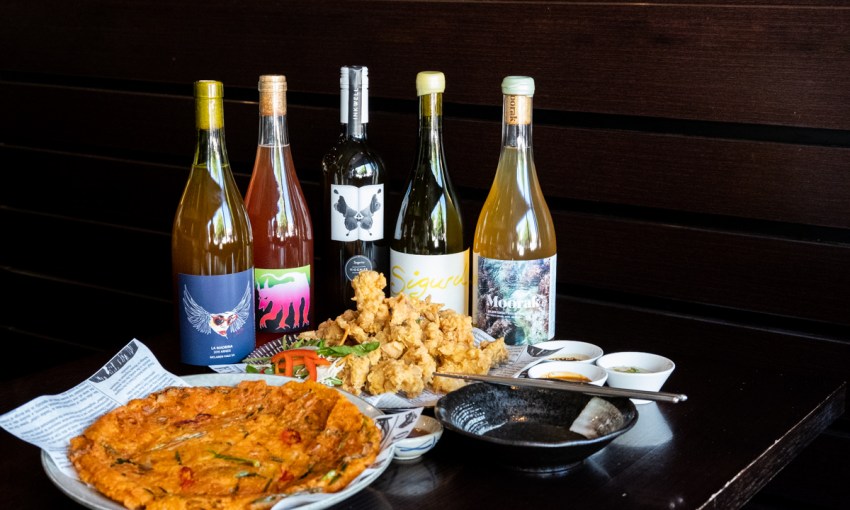 Where would we all be without a bit of skin contact?

You can also see The Fruitful Pursuit’s selection of high-five red wines and white wines at the links.

Three harvests of skins-y fun have been released in Australia since Not Quite White, a skin-contact showcase that was as experimental as the wines themselves.

Through NQW, we (publicly) examined the broadest collection of Australian wines aspiring to this category: ambers, oranges and cloudy whites, with every shade in between.

Below we have selected five recent local triumphs of this nature, primed for your seasonal gathering.

Although not all discernibly ‘comfy in their own skins’, the casual degree of displacement these wines undergo is where the gold is actually found.

Texture and tannin is developed in these wines, akin to reds, with an array of otherworldly delectables that our current lexicon does not contain. It’s a veritable pinball machine for the senses, for both makers and drinkers alike.

From safe nudges though to full-blown mastery, a commonality amongst Australia’s skins-y things of note is the nervous excitability with which these wines are crafted. It’s an entirely fresh scope for most winemakers, one which contradicts every directive their lecturers gave them for white wine.

As for the rest of us, the drinkers, who bungee blindfolded into this chasm of unfounded delights, we perhaps fall short in acknowledging and experiencing the true depths of its origin.

The gritty, often inexplicably harmonious amber expressions from Georgia, where wine itself began, are sadly a rarity. The more cultish references of Friuli, where the movement re-blossomed, while somewhat more easily found, also number far too few on the shelves of our beloved indie bottle-os.

Perhaps it’s time we all pull a bit more focus, collectively, and get closer to our favourite importers.

Anyway, back to our high-five wines for this week, and how to enjoy them.

In and of themselves, however, these are all ‘experience wines’. They can be enjoyed alone. They should also be observed over a spectrum of temperatures. Chill them, then watch them unfold as they warm.

Sit down. Strap in. You might encounter corners that almost pull your wig clean off. You will be challenged, but you also run the risk of being equally as pleased. 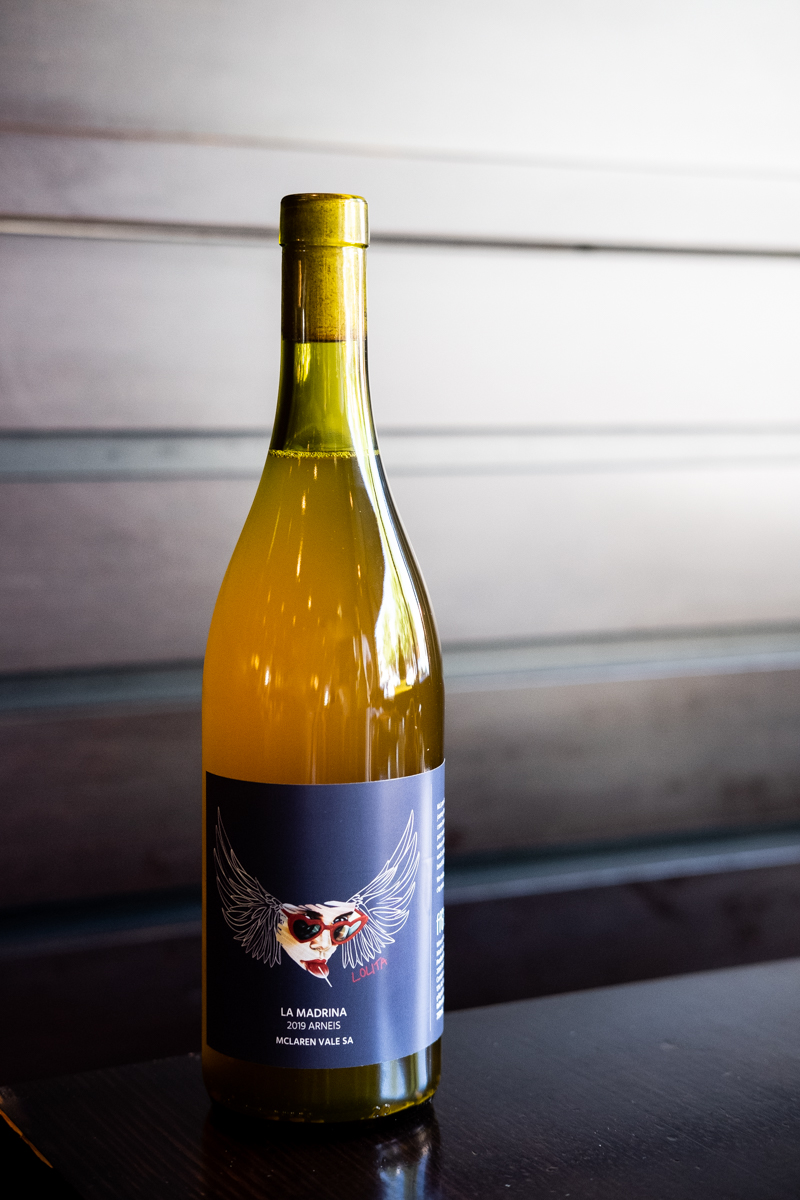 A cerebral and flavoursome dose from the Godmother, herself.

A small load of organic Arneis is handpicked early, from a slightly elevated perch up the back of McLaren Vale. Half is sealed-up, bunches and all with a bit of crush, to ferment in giant 300-litre clay pots made by Mark Heidenreich. It’s then gently basket-pressed, and along with the other half, sees a year in old oak vessels with further textural persuasions.

The hue is cumquat, with a lavish milkiness about it.

On the tongue at first, a love-tap of bitter rind, invoking all those amaro refreshments from her land of origin. The zippiest of acids whips the tongue. So citrusy but somehow soft, with a core of beautifully concentrated fruit. Leaves the mouth feeling refreshed.

Very much a ‘those who know, know’ experience. 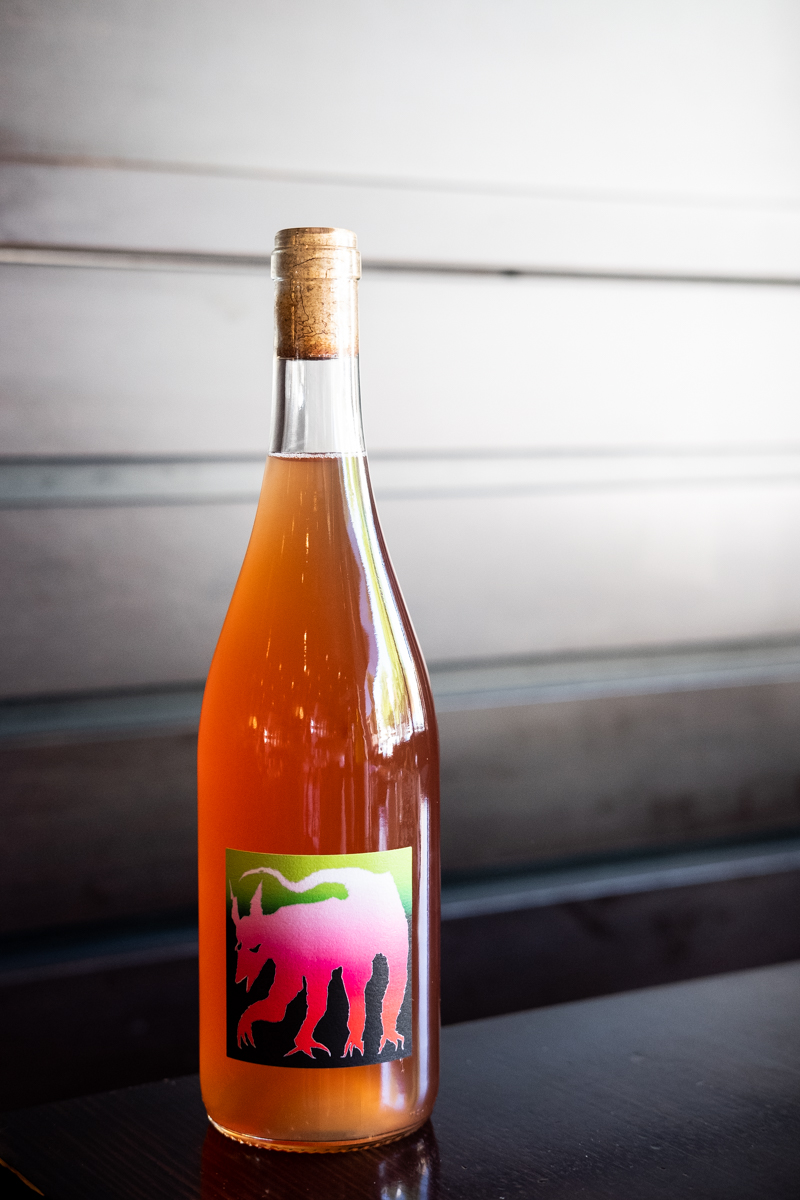 A discombobulated but symphonic mesh of organic Riverland and Adelaide Hills fruit.

Hyper dense on the beak. A hard funnelling of musk, apple strudel and wafts of glühwein—it may very well be the ideal accompaniment for a more Euro-centric spread this Christmas.

It’s turbocharged with native Finger Lime caviar to boost the acid, which edges on eye-watering, then much like a skinny dip in a too-cool pool, you’ll jolt at first but pay it no mind after a few minutes. Cinzano! Then a mouthful of rosewater, chewy Turkish Delight.

You may feel like you’re sharing in some kind of psychotic episode, but that’s exactly the winemaker’s pleasure. Thanks, Sammy.

Several journeys in the same glass, with no sulphur added. 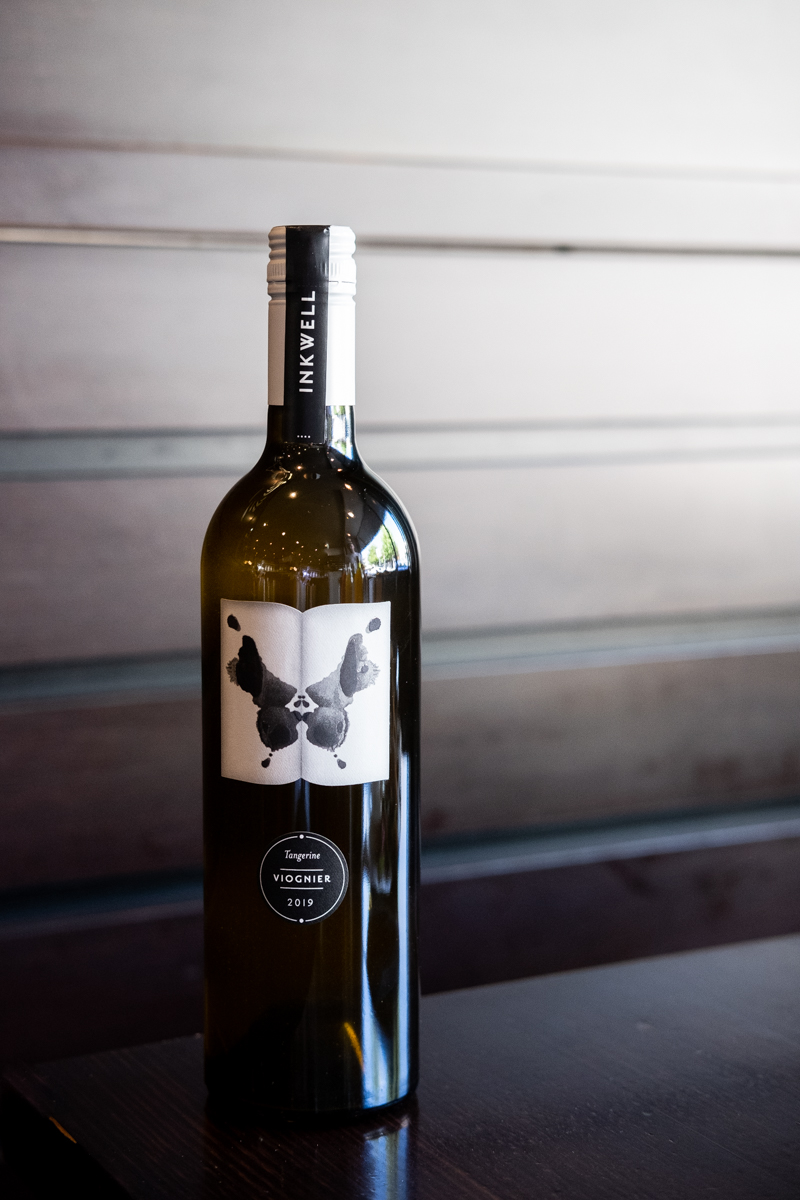 Sustainably farmed Viognier, grown on a rather special patch of sandy dirt at Dudley and Irina-Santiago Brown’s place in McLaren Vale.

A certain ‘sweet ’n’ sour’ sentiment draws you in. It’s a delicate, compelling thing. Apricot and caramelised pineapple. Cinnamon and sandlewood. A twinge of oily, pithy citrus. It’s textural not tannic, and lengthy as such, with a very high-degree of tilt-ability.

Much wilder than the label may express.

A most playful face on Viognier, that has seemed forever synced with the olde modes. 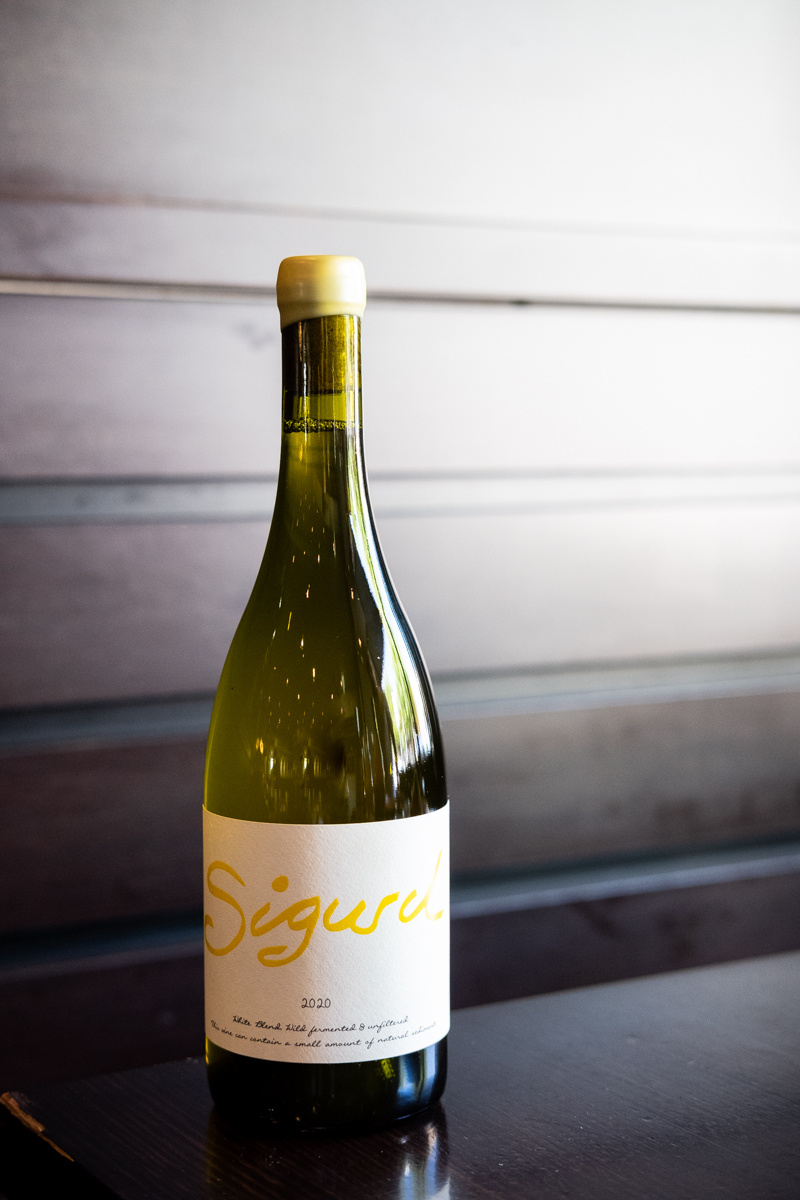 A multi-regional mega blend, on skins.

Lemon juice, with a lighter, more subtle tropicality from Sigurd. Starfruit. Party Mix bananas. Bit of herby stuff. And smoke, that, intriguingly, throws off your gauge a touch.

Ample citrus yumminess and fruit sweetness to taste. Tinned pineapple juice, gently braced by the use of oak, some of which is very old, in a very large format.

It’s almost a ‘fumé’ style — somewhat against the grain, but show me a rulebook, mate.

We enjoyed this one closer to air temperature. 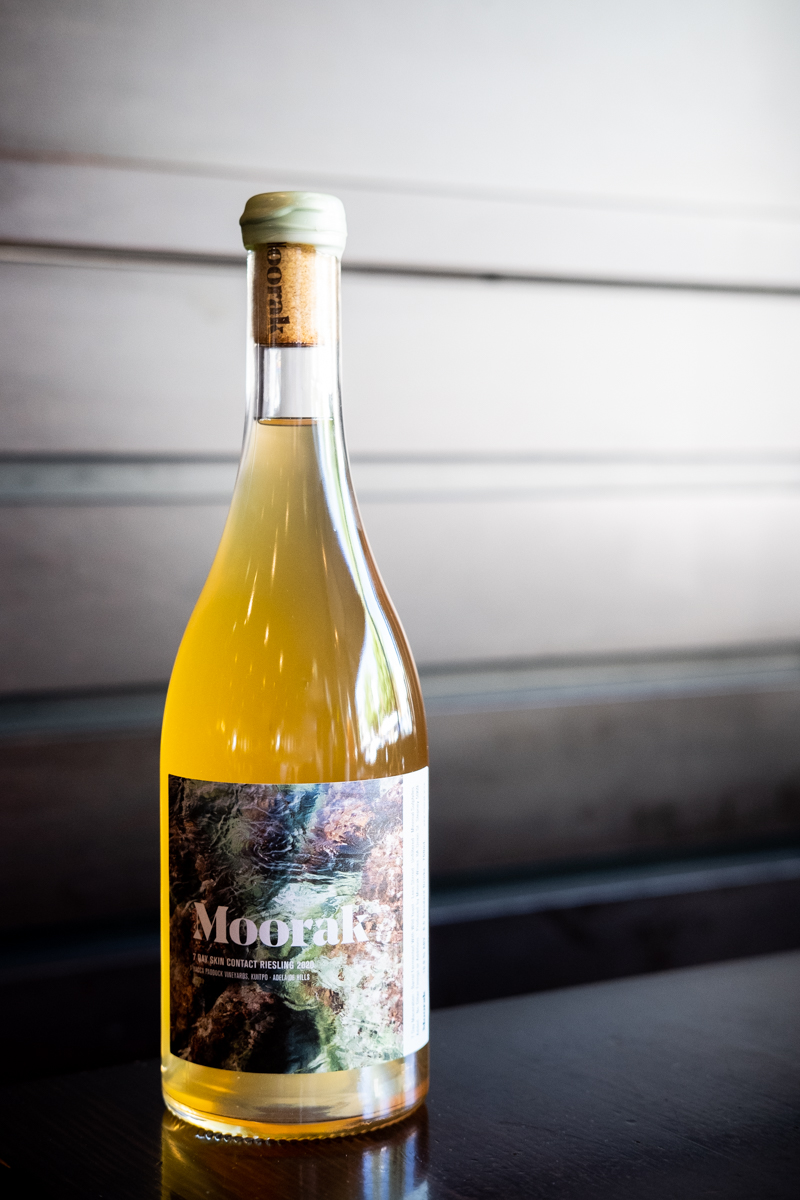 A snappy take from Jordan Hein, the smiley newcomer whose already sending plenty of eyebrows floating up over the hairline.

Peer gently: the snout is peppered with rosemary, lavender and fennel seed, and some other dry-roasted native bits. This display feels strangely familiar, like catching whiff of a neighbour’s herb patch on your way to buy batteries for the air-con remote on a 42° day. Carries to the tongue nicely.

Then, POW! If you were wondering where the Riesling went, HERE IT IS. A rapturous assault on the mandibles. Oh-my-acid, while a suitcase of skin-contact unpacks itself: stems and stalks then seeds and skins.

We encountered this drop at Wine Playground ADL 2020 and were promptly silenced.

Serve it ice cold. It’ll uphold those high notes while harnessing the ‘Rizza’ quench you so desire.

Our good friends at Koyeosa on Pulteney Street provided us with a backdrop upon which to feature the skin-contact white wines you see above. When asked for a suggested pairing to these most interesting wines, the team served up a plate of Koyeosa special Korean fried chicken (with three dipping sauces) and kimchi jeon. 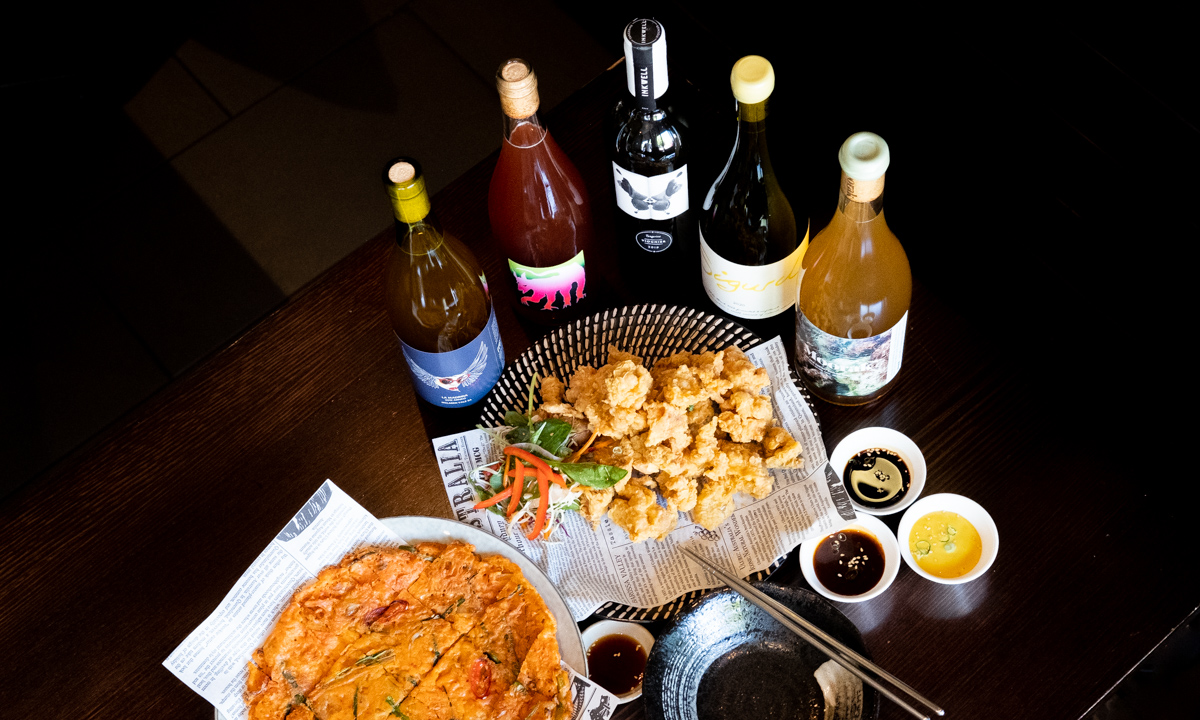