At last, you can book a table at the new Soi 38 on Pirie Street, after an easing of restrictions has allowed the restaurant to reopen its doors after a lockdown delay.

Soi 38 has opened its doors for a second go at a launch at its new space on Pirie Street.

The new restaurant’s first week of trade was cut short last Tuesday due to the lockdown, but it has continued dine-in service from lunchtime on Wednesday, 28 July.

CityMag sat with Daisy Miller, who co-founded Soi 38 in 2014 with her husband Terry Intarakhamhaeng, on Friday before the lockdown to hear how this new iteration would build on the previous Soi site.

Even before the lockdown, the Pirie Street restaurant was long overdue.

Daisy hoped to close the original Pulteney Street shop and move operations to Pirie by November 2020.

With a smile, Daisy asks us to point at any individual element in the new space – even the floor – and she can describe how it contributed to the delay.

The additional delay was frustrating, but completely on theme for the project.

Pirie Street is the third phase of Soi 38.

Daisy refers to the first iteration of Soi, from 2014, as “black and yellow” – which was its colour scheme, taken from road signs as a reference to Soi’s then-street food offering.

In 2018, the restaurant relaunched with a revamped fit out and a new culinary concept.

Rather than street food, chef Terry designed a menu intended as a tour across regional Thailand.

This was built on Terry’s history as a Buddhist monk, a scientist who travelled across the country doing bird surveys, and as a tour guide.

“You can do a ‘feed me’ anywhere, right? But a ‘feed me’ that takes you away from the dining table, if you like. That’s what we had.”

The concept won fans at the Pulteney Street site, but Daisy and Terry still felt hamstrung by the shop’s peculiarities.

The kitchen was L-shape, which slowed down communication between chefs, and the equipment was underdeveloped – a sturdy Gaganis barbecue was installed as a grill.

Daisy describes the Pirie Street restaurant as the “dream version” of Soi 38 they’ve envisioned since the 2018 revamp.

“We can elevate things that little bit more to the level that Terry wants to get to,” Daisy says.

There are many favourites still on the menu (including the sago dumplings), and Daisy points out game meat dishes on the menu.

The kitchen has been fitted out with a dry-ager, so Terry can purchase, store and make use whole carcasses as he sees fit.

“There’s a wild buffalo tartare and a rare-grilled venison with nam jim and tomato paste. These are dishes that would be very commonplace in the north of Thailand in those more remote communities,” Daisy says. 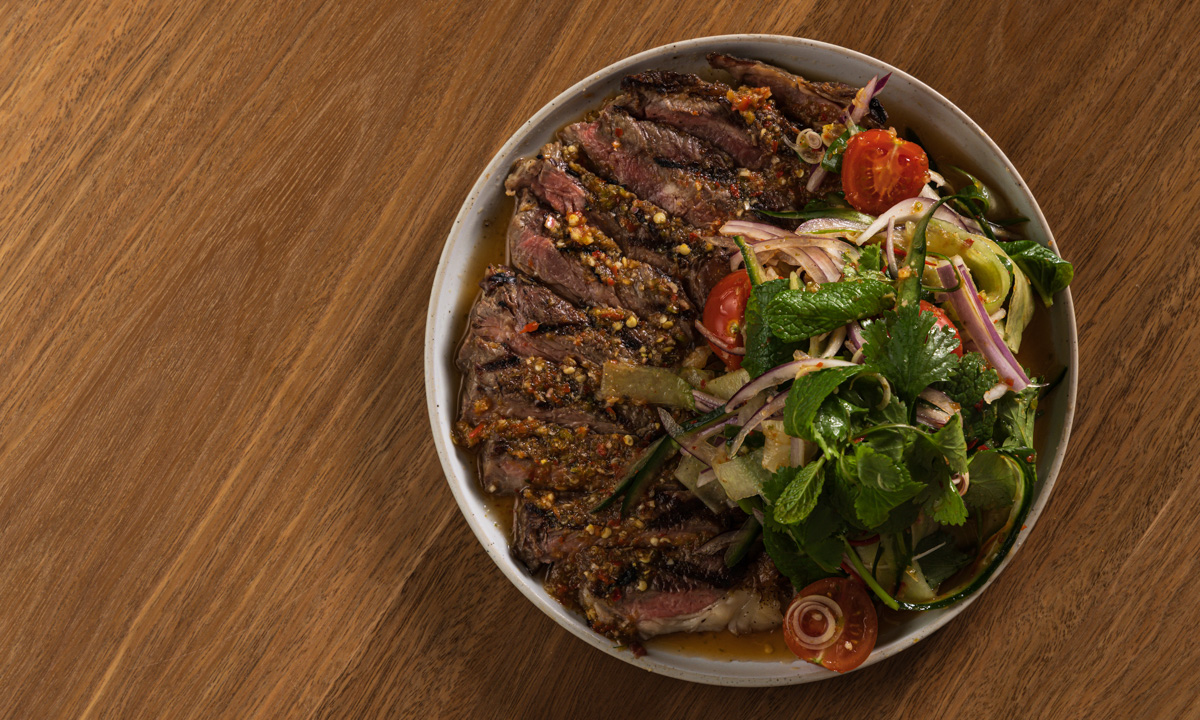 The alcohol offering has also developed under the stewardship of Oscar Miller, Daisy’s brother and a business partner in the project.

Oscar has previously worked as a winemaker and at London wine bar Vinoteca.

“When it was [my list], it was people I liked and things that I liked. I was always very proud of my wine lists, but Oscar has certainly elevated it.

“There’ a really great champagne list. Champagne and Thai food go really well together, because it’s textural and acidic and fun.

“We still do struggle with that idea that Thai food is about drinking a cold beer and not enjoying really good quality wine.”

A great deal of effort has been made to design an environment befitting of both beer and champagne.

Soi 38 Pirie Street has a fitout courtesy of Walter Brooke. It’s soft in tone, referencing the light of dawn and dusk when Terry would go out on bird-surveying expeditions.

The use of a terracotta palette and the 200-or-so flags hanging from the ceiling are references to Thai temples and Terry’s Buddhist monk past.

There’s a great deal of South Australian craft in the space, too.

The dining tables and chairs have come from Remington Matters; stools at the bar are from JamFactory; and the bar itself was constructed, in part, by Love Concrete.

Daisy is visibly awed by the outcome.

“When I saw the drawings of this, I didn’t actually believe that it would look like this, you know?” she says.

“I didn’t believe it could be this good.” 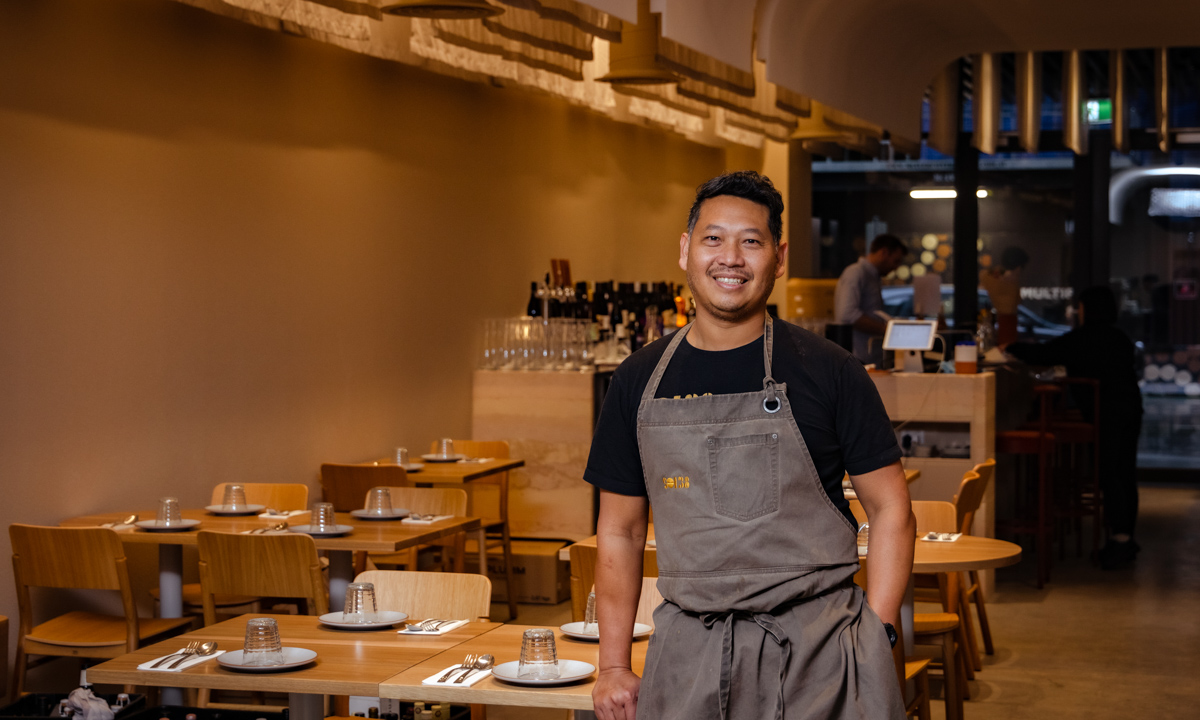 The Soi team is still in control of their Pulteney Street space, which will relaunch as Fire – Soi’s pop-up festival concept.

Fire will be a perfect fit for the site, Daisy says.

The team is aiming for an August relaunch of the space, but Daisy suggests it’ll be best to just wait and see.

Daisy returned to a career in politics last year, only coming back briefly to help with the restaurants settling-in period.

She and Terry figured it would be safer if only one member of their household was reliant on the finicky hospitality industry during COVID.

She could only step back with confidence, though, because of the team she and Terry have built since founding Soi 38 as a duo seven years ago.

Alongside Daisy and Terry, the ownership group now includes Oscar, Pui Kannika and Jacqui Lim. And many of the floor and kitchen staff have been with the business for years.

“There’s no way without the team structure that we’ve got now that I would have been able to step back into what I’m doing. And the restaurant is better because of it,” Daisy says.

“Having people who are passionate about it is what you need in hospitality. So yeah, I feel incredibly lucky.”

While high-level restrictions are in place, the restaurant requires patrons to book ahead, which you can do here.