Humble design is the theme at Part Time Lover

Taking cues from Himalayan guesthouses and leaning heavily on mid-century ideals, we take a peek behind the plastic sheets covering the new all-day bistro behind Town Hall.

Nestled between the bluestone Town Hall building and the beige tones of the Adina Treasury Hotel, sits a low-slung and humble timber pavilion with large glass windows, flanked by garden beds on all sides.

There’s plastic over the windows to stop prying eyes from peering in, which creates a fantastic reveal when we open the doors to see just how far Part Time Lover has advanced since our last visit.

What was once a thoroughfare – a shortcut between King William and Pirie Streets – has been transformed by Sans-Arc Studio into a joyful capsule for all-day drinking, dining, lingering and lounging. What were (and still are) the garden bed edges have been repurposed as seating for the restaurant and run the perimeter.

Two custom light fittings hang from the ceiling, one over the series of fixed two-seater tables and the other over the bar. The strip light is powered by LED but the diffuser creates an incredible sort of light that is bright and clear and warm and forgiving.

This is an attractive scene.

“Emotionally, the owners, myself, we are all invested, we really give a shit about making this work, giving this area, the centre of the CBD something really special,” says director of Sans-Arc Studio, Matiya Marovic.

“It is such a special location in the heart of the city. We wanted it to be true to its context, drawing on the skills of the partners: Stewart [Wesson]’s food, Josh [Baker]’s approach to hospitality, Luke [Turton]’s service – and thinking deeply about how these ingredients can make a venue exceptional, and contribute greatly to the food, social and cultural scene of Adelaide.” 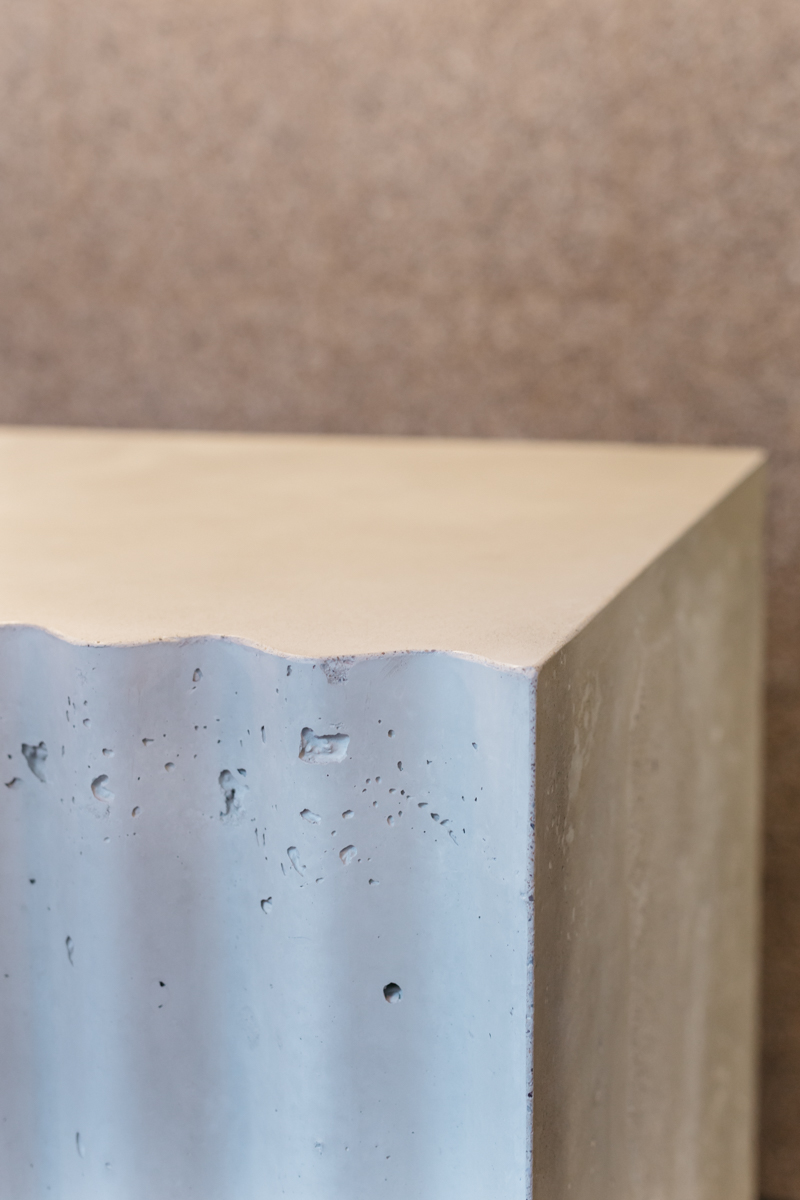 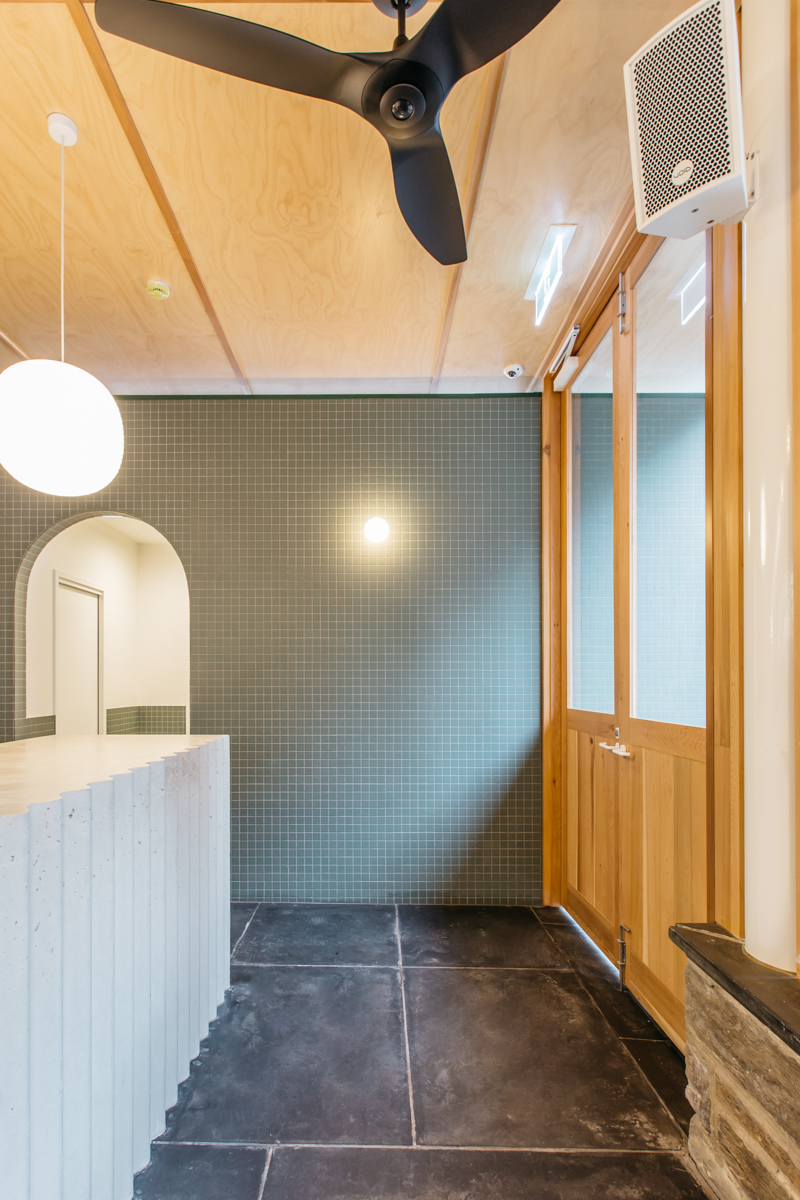 “I saw this as a structural element and drew some inspiration from the way Carlo Scarpa uses mass and concrete in interiors. The corrugated section of the bar is about creating this rich, material layering at the entry point” – project designer Matiya Marovich

And it is special, but not for the bells and whistles or even the cheeky little neon cloud on the eastern façade. Part Time Lover is special because it feels authentic to Adelaide, a space that is made possible only by the journey of every partner to this point.

Sure, it has hints of modernism in its proportions, there’s a nod to Palm Springs in its materiality too, and a wink – sideways – at Alan Fletcher with its branding and packaging. However, the way these elements have been re-interpreted in this context is entirely original.

We ask Matiya why we get this impression. Is it something he consciously set out to do?

“Working with JB (Josh Baker) over the years has been integral to Sans-Arc,” says Matiya. “One of the things that makes our working relationship so fruitful is that we’ve mostly worked on projects that are some sort of adaptive re-use.

“The challenges with Part Time Lover were bigger than our previous projects, but then so was the opportunity.”

The design response challenges but compliments the building’s context between several different eras of architecture in the immediate vicinity, and even within the build itself. Sans-Arc is contrasting timber and green tiles against heritage stone and Mintaro slate flooring.

And come summer the whole place will open up, with the windows that encase the space opening up at 90 degrees for cross ventilation. This window system and timber walls were inspired by Matiya’s various trips to the Himalayas and his stays in Nepali guesthouses.

“For me the window system is one of the best parts of the project, not just because of the Nepali inspiration, but because it creates an amazing connection between the venue and the adjacent street,” says Matiya.

“Ideally, the space will look really intimate and inviting at night, gently illuminated from inside, layered with plants, some windows open and people moving around inside.”

Beyond the warm and inviting interior, cheery illustrations and a chubby cloud beckon passers-by to climb the slate steps and become a part of this scene. 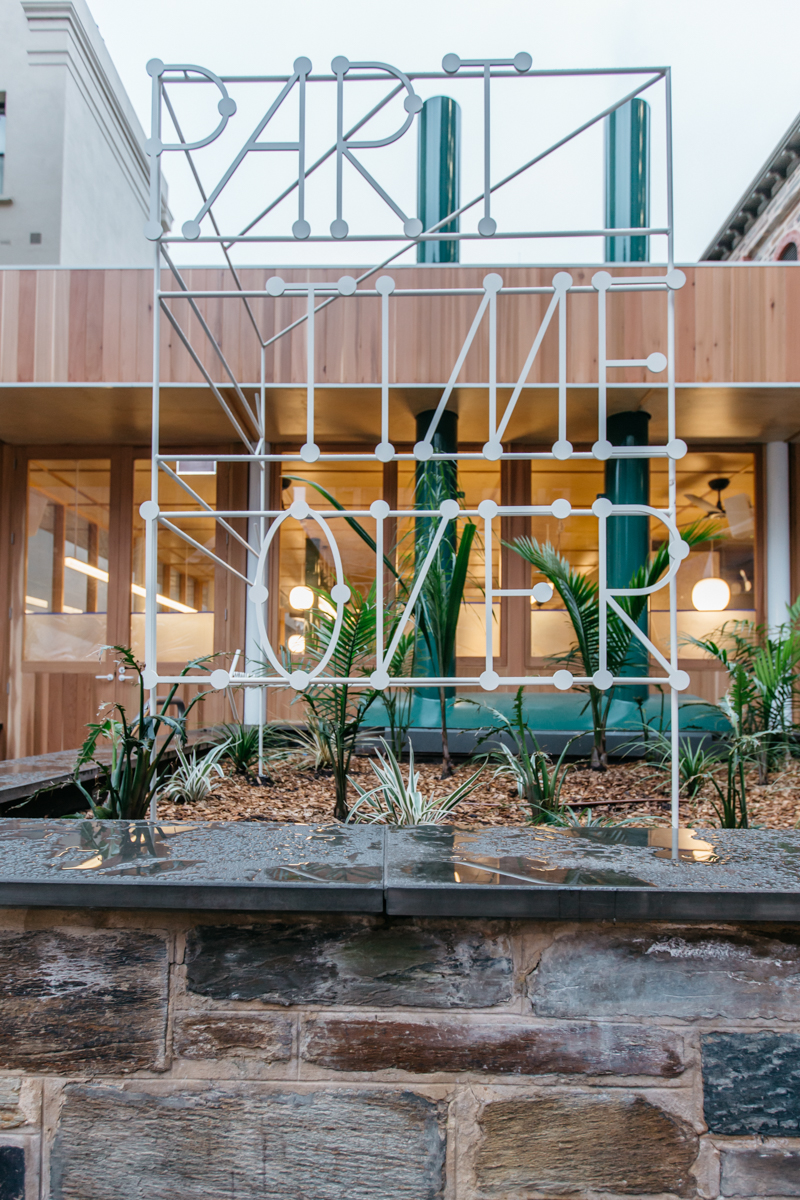 Graphic design firm Peculiar Familia has worked with Sans-Arc creating food and drink venue identities for the past five years. Part Time Lover is, without doubt, our favourite to date.

“I guess mid-century design is having a bit of a moment right now, and this identity pulls pretty heavily on those strings,” says Carlo Jensen, director of Peculiar Familia.

“A lot of hype and attention is currently being placed on mid-century architecture, interior design and furniture, but not much fuss has been made of the brilliance of mid-century graphic artists.

“Alan Fletcher and his book The Art of Looking Sideways has always been a massive inspiration of mine, even since university days,” says Carlo.

Living and working in London recently, Carlo met illustrator Alec Doherty  and resolved to keep him in mind as an illustrator for the right project. Part Time Lover was it, and Alec’s waif-like markings lend a whimsy and attitude to its visual identity that totally affirms you are in the right place.

The authenticity of Part Time Lover’s design, its humility between heritage icons but unapologetic pride in its presence, comes from the designers driving its aesthetic attitude.

More than a designer, Carlo Jensen came up with the name for this place. The phrase ‘part-time lover, full-time friend’ popped into Carlo’s brain and quickly into the venue’s vernacular. 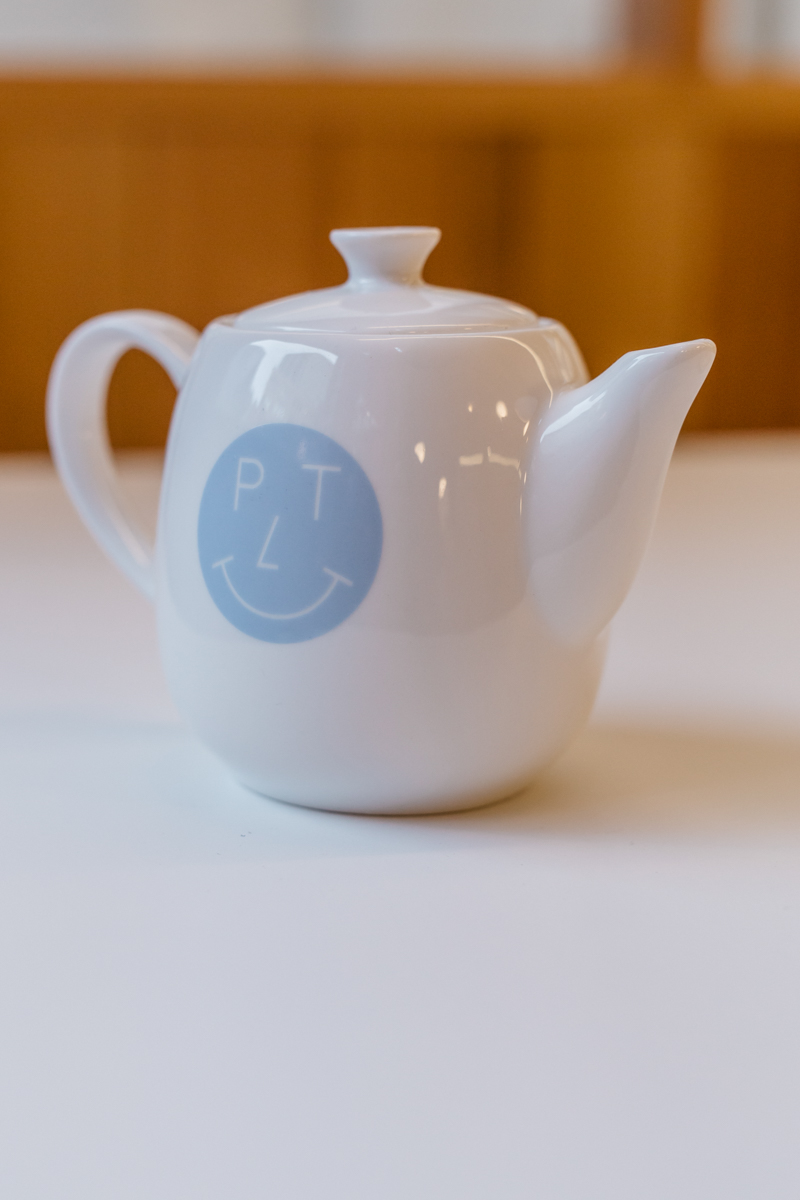 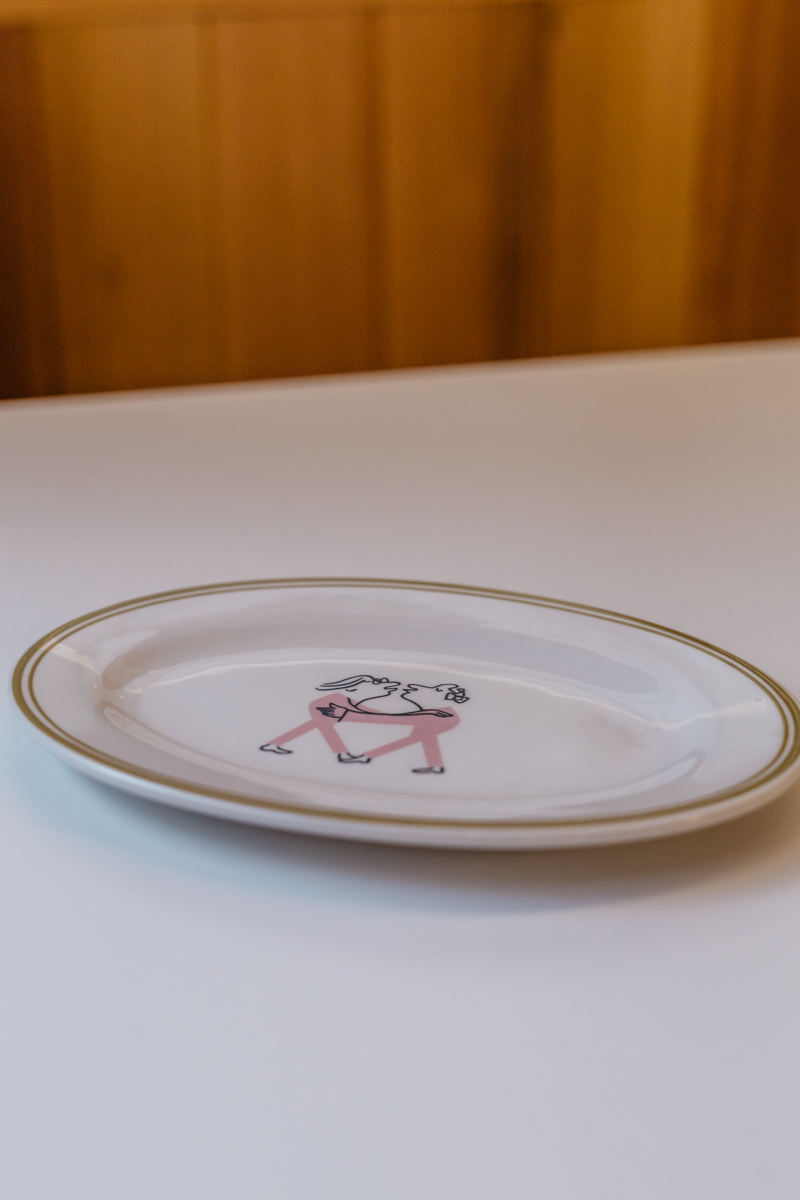 The elegant and effortless illustrations of Alec Doherty

Similarly, Matiya isn’t just concerned with the timber and tiles and the proportion of his roof and windows. He’s been able to contribute a bunch of sustainability initiatives to Part Time Lover’s business model.

“I’ve been helping the team explore how to make the operation more sustainable day-to-day,” says Matiya. “This includes only having beer and soft drinks on tap, no single use cans or plastic bottles, introducing wine on tap, a compostable takeaway coffee cup, and an organic waste composting scheme,” Matiya says.

“Stewart (Wesson chef and partner in the business) has even made the menu one-third vego!”

Of course there will be Instagram moments inside and out at Part Time Lover, the kind that’ll capture people’s attentions and momentarily take over your social media feed. But, because you read to the bottom of this article, you’ll know a bit more about the real design work that goes into building a world-class project.

Part Time Lover isn’t just another food and drink venue in Adelaide’s booming hospitality industry, it defines a moment where some very clever people decided it was important to care about this place and their lasting impact on our land.