The restaurant that looks out into the heart of the Adelaide Botanic Garden has been remade to fit the modern era of fine dining, as chef Justin James sees it. 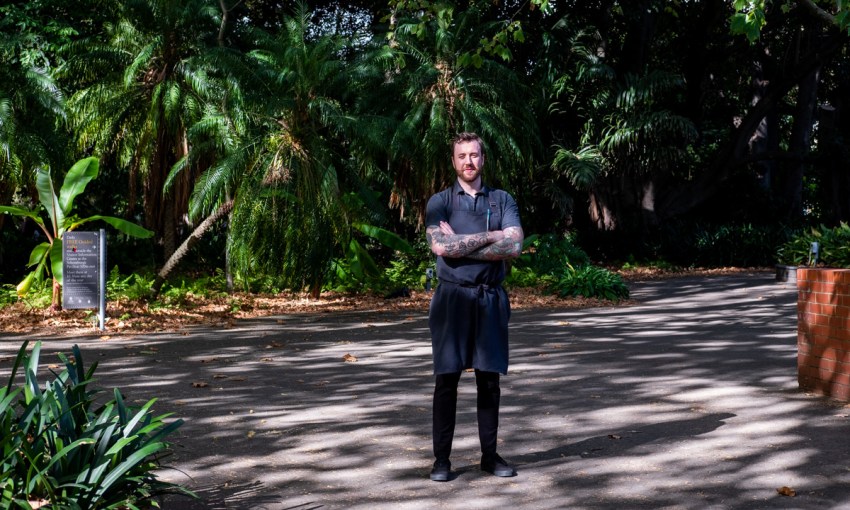 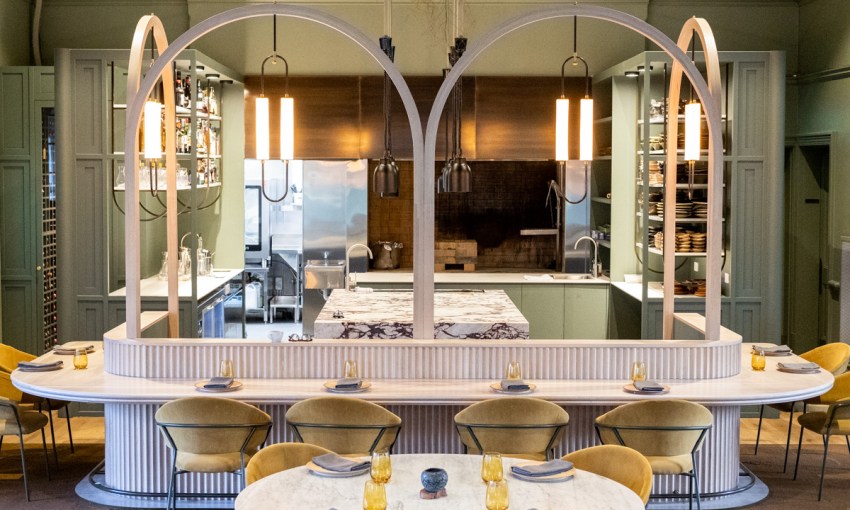 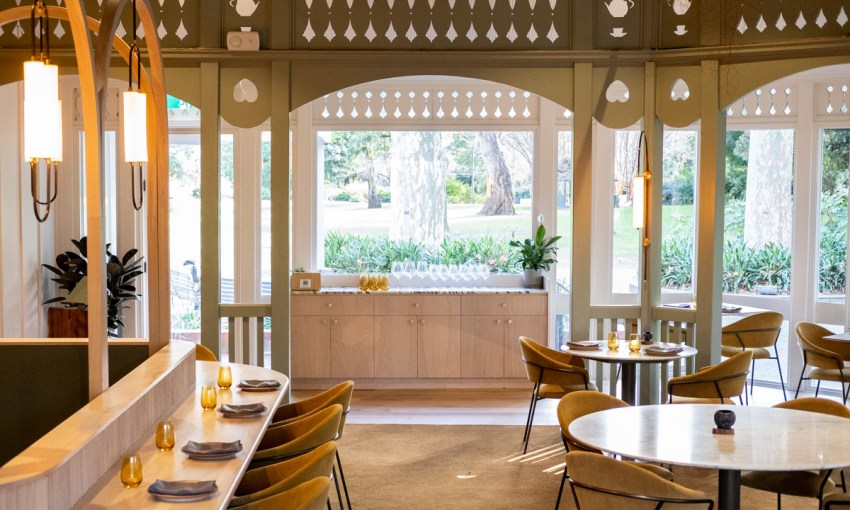 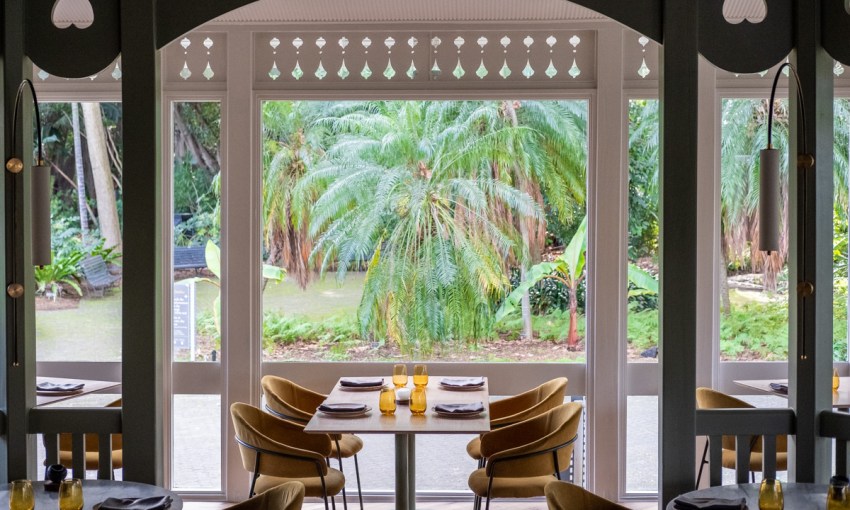 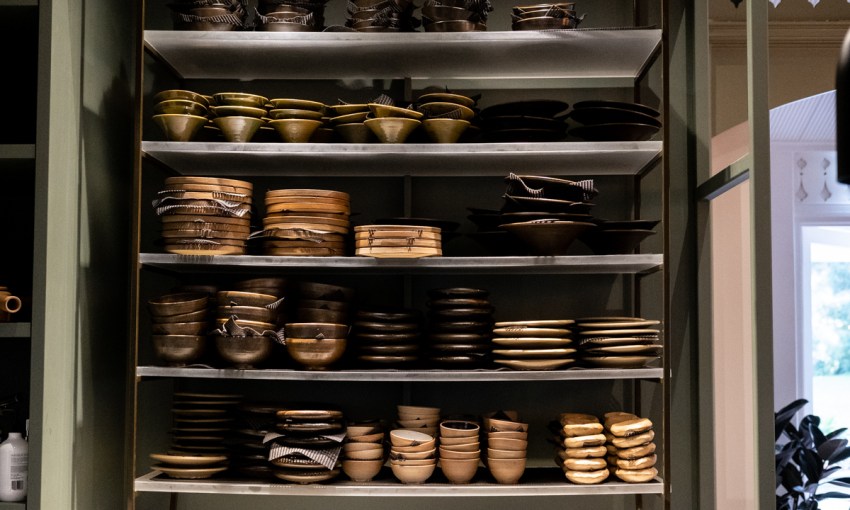 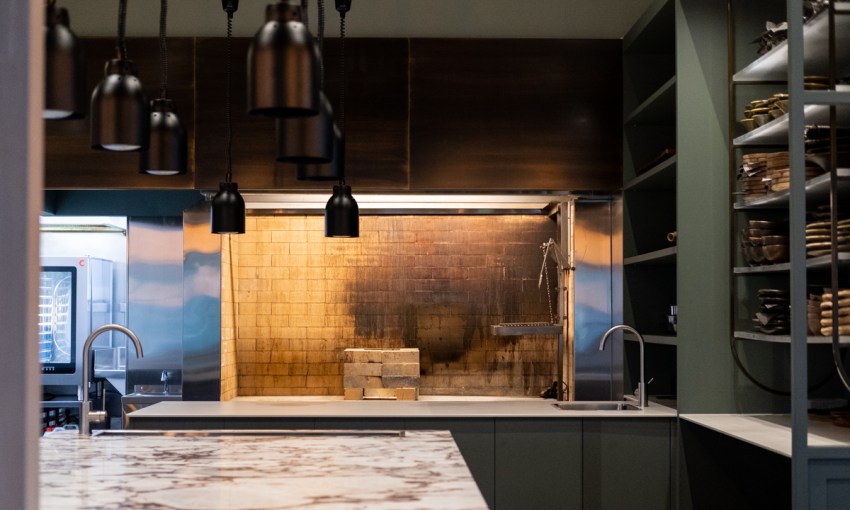 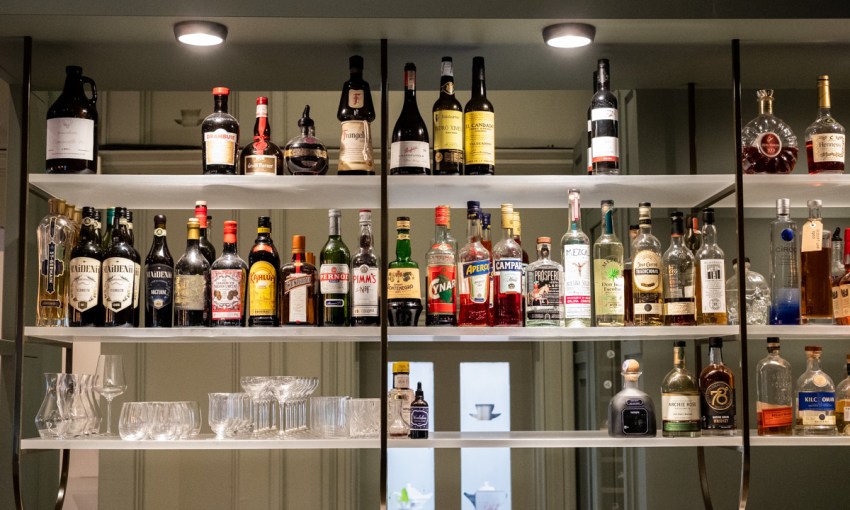 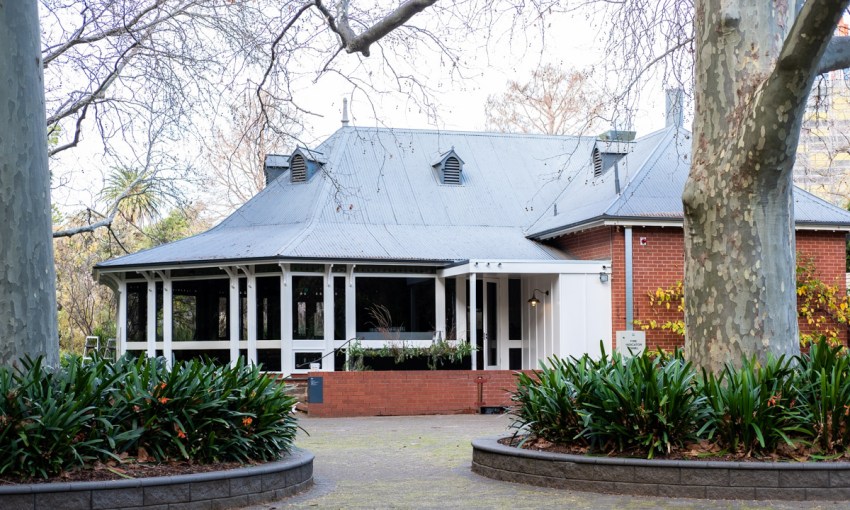 Back in early May, the Botanic Gardens Restaurant closed to begin its metamorphosis.

The restaurant had been under the stewardship of Paul Baker for six years, up until June 2020, when the chef left the job, and the restaurant industry, to start Chefs on Wheels.

The same month Paul left, the restaurant contracted a new executive chef, Justin James, a native Michigander based in Melbourne, who would begin the role in December.

Justin had been in Melbourne for almost six years (except for a brief stint in Brisbane), but had already taken a job in Los Angeles at the time he was approached.

The LA job was a “a nice little 16-seater… striving for some Michelin stars,” he says, but Justin still wasn’t closed off to the idea of staying in Australia.

But when Botanic Garden Restaurant owners Chris Horner and Steve Blanco came to him with a pitch for a new version of their iconic venue, Adelaide seemed like a pretty good place to relocate to.

Up until this point, Justin hadn’t heard much about the city.

He had heard all the typical clichés, like “boring, a bit slow”, from “cooks working with me at Vue [de Monde],” he says.

Even this wasn’t a dealbreaker.

“The older I get the quieter I like it,” he laughs.

But when he got to Adelaide, he discovered a city that knows and loves good hospitality.

“I’ve gone down some alleyways, popped in for some drinks here and there. There are some things that easily compete with what you’d find in Melbourne and Sydney,” he says.

“And it seems to be, generally, a lot of foodies around the area that know what good produce is, good wine is and things like that.”

He had expected this, knowing South Australia’s reputation for wine.

“Typically, when you have good wine being produced, there should be good food around,” he says.

“Not knowing too much about the restaurant scene here… I just thought, there’s an opportunity for someone to come here, like myself, in the right location, with the right owners that are supportive.

“There’s some really great restaurants already doing some similar things, as in a degustation at a higher price point, like Magill [Estate] and Hentley [Farm], but in Melbourne and Sydney, there’s a lot more that offer that.”

On Friday, 2 July, the restaurant emerged from its chrysalis of rented fencing with its new fitout, courtesy of Williams Burton Leopardi, and identity: Restaurant Botanic. 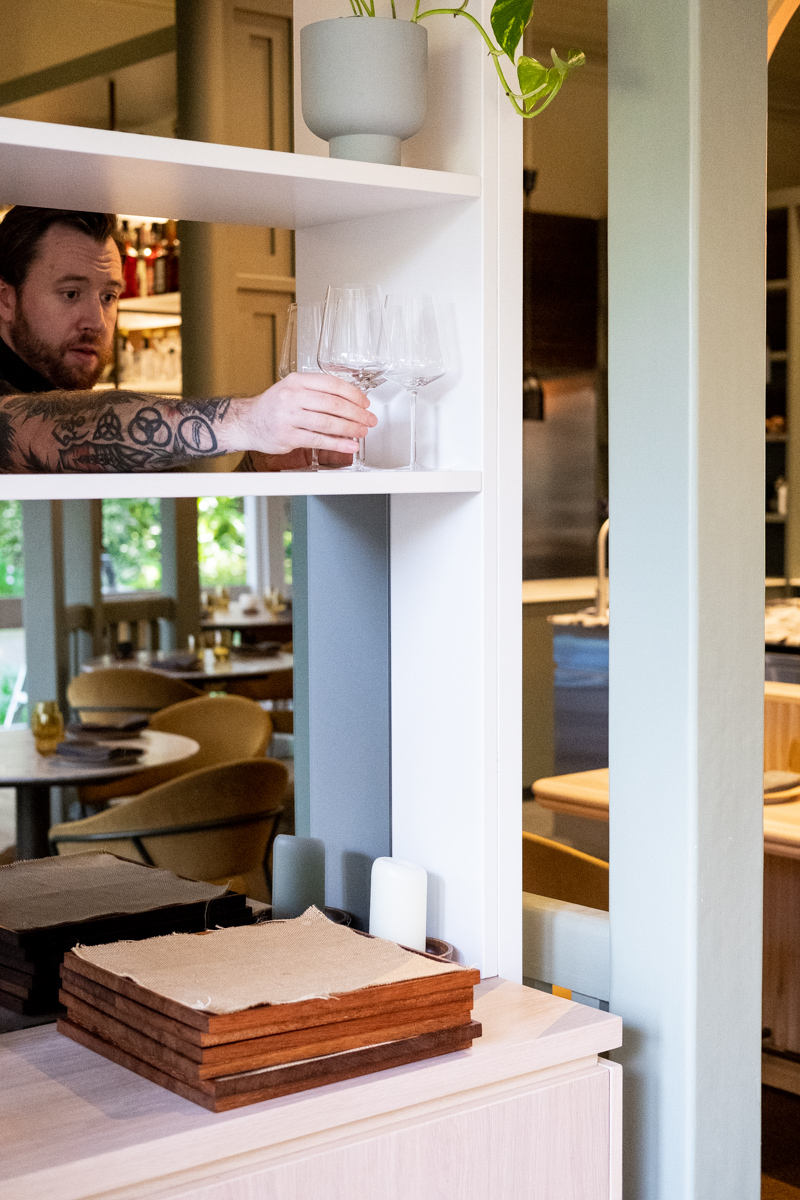 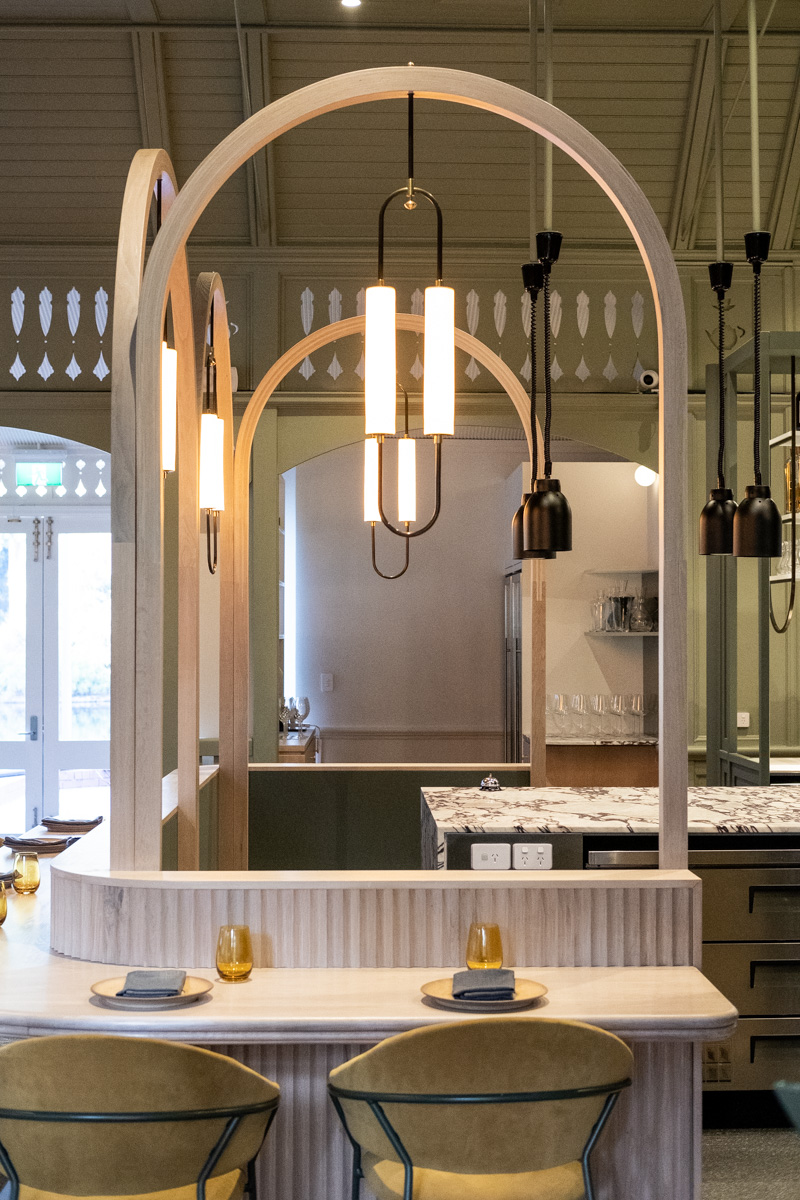 The vision for this new concept is informed by Justin’s impressive kitchen career, which includes stints in two World’s Best Restaurants – Noma and Eleven Madison Park (the latter of which recently relaunched with an entirely plant-based menu).

Here in Australia, Justin worked at Vue de Monde in Melbourne and was briefly poached to Brisbane to be the executive chef of Howard Smith Wharves, a development on the banks of the Brisbane River with several restaurants and eateries.

At Restaurant Botanic, Justin has designed a seasonal tasting menu, with minor tweaks occurring throughout the week and major changes made as new produce becomes available.

“The philosophy of the food, I have a clear vision on that, and the service. It’s exceptional produce, exceptional experiences, is basically it. And under that, there’s a lot of smaller details,” he says.

The restaurant has made use of many local craftspeople for its new identity, including Handmade & Found, Aburi Ceramics, furniture maker Peter Fong, Dogboy Knives and floral artist Arcadia Aquatic.

A large dried floral arrangement hanging above the dining space will be updated every couple of months to reflect the seasons.

Similarly, Justin will make use of local produce, including ingredients from within the Botanic Garden. Native foods will also feature, but neither hyper-locality nor Indigenous food will be a dominant focus.

A Restaurant Botanic dish, as designed by James, is “creative, it’s delicious, it’s very nice to look at as well”, he says, such as his bunya-bunya and native thyme dessert.

“I’m working [with] branches of the bunya-bunya trees, in the garden, in this dessert [in which] nothing’s smoked, but it’s super smoky. Tastes like coffee, but there’s no coffee in it. It’s sweet and it’s a little salty, and really there’s only the branches… and then it’s hit with a little bit of native thyme,” he says.

“To me, that is everything – it’s coming from the garden; it’s flavours you’ve never had before, you’re going to be blown away by; there are native ingredients, native thyme and bunya-bunya; then there’s the apples from a local seasonal grower as well.” 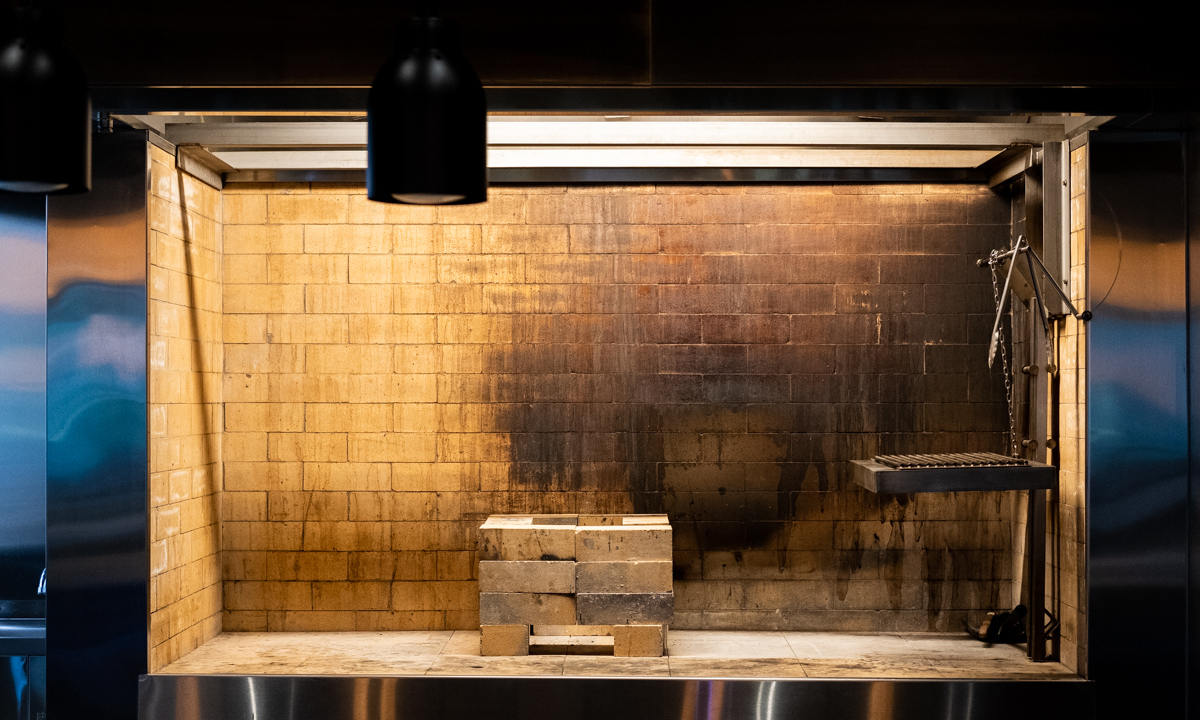 Just as in its previous iteration, Restaurant Botanic is a fine-dining establishment. There are two tasting menus to choose from: ‘The Short Path’, which is $135, and ‘The Long Trail’, which is $195.

The restaurant’s price point means it will not be broadly accessible, but Justin sees there is still room in Adelaide for more of this type of dining experience.

He hopes his guests approach Restaurant Botanic with a mindset for experience.

“A lot of times you see these restaurants are for celebration – that’s amazing, that draws in a lot of business,” Justin says. “…but also, it’s an experience.

“And when we eat as well, we use all five senses – when you’re in the restaurant, it’s living, breathing, there’s a lot of energy in there. You can feel it.” 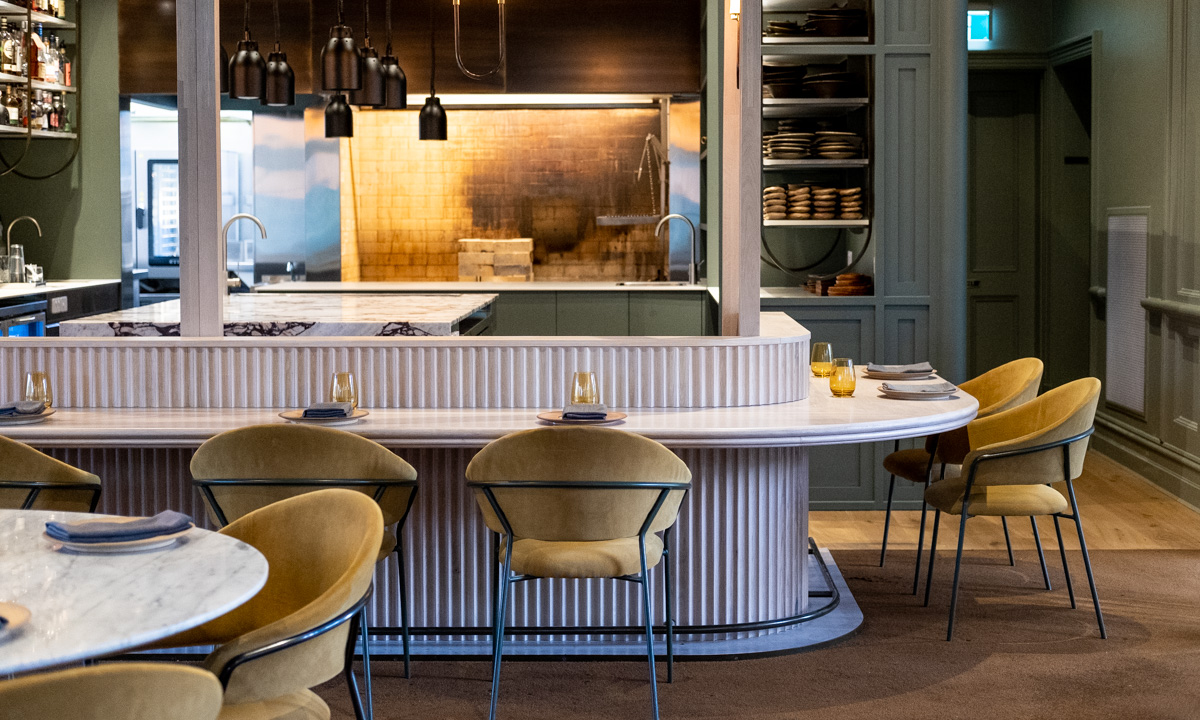 Unlike in the former restaurant, diners can sit with a view into the kitchen

As evidenced by the Restaurant Botanic kitchen now protruding into the dining space, the traditional fourth wall of fine dining doesn’t appear to interest Justin.

But that doesn’t mean toning down the execution.

“It’s not casual fine dining, it is fine dining. I don’t see how you can tone that down.

“When it’s ‘upscale casual’, what you’ve done is… you haven’t delivered on the taste or the experience, which sometimes then makes people say, ‘Well, why should I spend $70 on a plate?’

“When you come here, we’re looking to hit every mark of what I think hospitality is.”

Restaurant Botanic opens for lunch Thursday through Sunday and Dinner Friday and Saturday. Book via the website.