Adelaide hospitality is rallying to raise funds for Ukraine

Adelaide Hills winemaker Sev Perru was compelled to help Ukrainians fleeing war, so she's brought together dozens of winemakers, brewers and small business owners together to raise money for the cause at La Buvette this weekend. 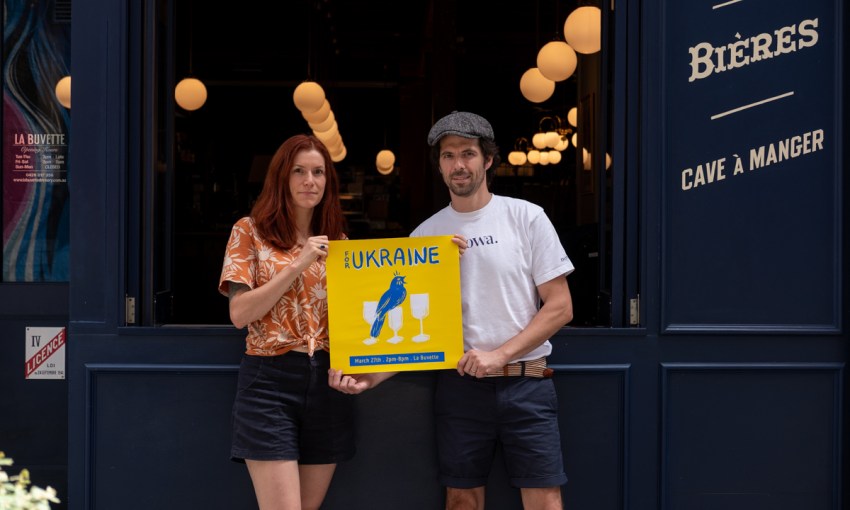 As news of the Russian invasion of Ukraine filtered into Australian news bulletins, Adelaide-based winemaker and wine director of New York bar The Ten Bells, Severine Perru, felt reverberations of her own family history.

In the faces of the Ukrainians fleeing the city due to heavy bombing (and those who stayed to fight), she saw the stories her grandfather had told her of the Second World War made flesh.

Sev is French, and her family comes from the Moselle region, which is located on the French-German border. The early- and mid-20th century was a very disruptive time for her forbears because of this.

She recalls her grandfather telling her of fleeing the area in 1940 due to German invasion. He told her of the generosity he and his family experienced as they were embraced by the communities they fled to as refugees.

“They had the chance to be hosted by people that opened their house for them,” Sev says.

As she watched the situation in Ukrainian degenerate, Sev recalled theses stories of care and support, which was so important to her family’s survival. She was compelled to help now.

“Since the first days of the conflict, the only thing I wanted to do was open my house and host families and help people, and I can’t do that because I’m too far away,” she says.

“So that was the point, saying, ‘What can we do to help?’, because the world is really heavy right now and we need to do things.”

As an Adelaide Hills winemaker, Sev has many connections in the local hospitality industry. While she had no home on the European continent to offer to displaced Ukrainians, she knew she could rally some friends in Adelaide to help raise money.

She started reaching out to winemakers, brewers and other small business owners to organise For Ukraine, a fundraiser wine party happening on Sunday, 27 March at La Buvette.

At time of writing, Sev has corralled 28 winemakers, who have donated more than 350 wines to the event, which will be sold by the glass and bottle, with all proceeds going to World Central Kitchen.

Eleven restaurants and businesses have also donated vouchers and goods to the cause, which will be raffled off. Participating entities include Brid, Ensemble, Gravity and Other Myths, LOC Bottle Bar and Smokelovers.

As news spreads of the event, Sev continues to get messages of support and offers of help.

Sev’s friend Olexij Straschko, a brewer with Western Ridge, has strong ties to the local Ukrainian community, and in addition to donating beer (including a one-off beetroot saison), he also organised for members of the Ukrainian Autocephalic Orthodox Church of St Michael to cook piroshkis for the event. There will be meat and vegetarian versions.

Local Ukrainian community members will also be selling plum cakes, and Brid has donated some sourdough.

“Olexij… was our link with the community, because his mum, as well as his grandma, is with the Orthodox church,” Sev says.

“They were pretty devastated in the beginning; they still are now. The refugees are starting to arrive, so they are trying to organise hosting everybody. It’s just so draining, emotionally draining.

“But that’s why, as well, it’s good to show them they’re not alone with this, that we’re also here to do what we can to support.”

Sev had seen La Buvette host a CFS fundraiser previously, so she knew owner Dominic Lentz would be open to hosting the event.

Not only that, but Dom and Sev’s families come from nearby regions in France, so she knew news of war breaking out in Europe would have triggered the same generational memories as it had in her.

“I felt like you’ve always got that sense where the Second World War is over and that’s it, nothing else will happen, but that threat now made us realise, hey, actually, no one’s safe,” Dom says.

Sev’s For Ukraine event kicks off at La Buvette at 2pm. A $20 donation will be taken as entry fee, which will also get you a ticket for the door prize raffles.

All funds raised will go to World Central Kitchen, which Sev says she chose for the work they do not only for the Ukrainian conflict, but elsewhere in the world.

“World Central Kitchen is doing a lot to help, and going into areas of conflict. They are risking their lives, they are doing a lot of actions and dedicating everything to nourish the refugees and to feed everybody, because I agree with their motto – it’s a human right to be fed.”

For Ukraine will run from 2pm ‘til 8pm at La Buvette on Sunday, 27 March.