A bottle of Grange

South Australia’s brand is many things, but it is not a logo.

I got a message on Facebook from one of Adelaide’s elite party liaisons the other day with the lead on a story for CityMag.

An Adelaide ex-pat had bought a painting off the wall at the Exeter Hotel for a friend who lived in Singapore.

*Editor’s Note: For all the young, aspiring journalists out there – if you’re pitching a story to your editor, it’s always a great idea to tell them why you think the story is interesting, important, or relevant. Don’t do what Joshua Fanning did in this case and just say, “An artist sold a painting – can I write about that?”. It’s much better to say, “Can I use this anecdote about some great SA people and institutions to reflect on our state brand?”.

Rant over. But, if you’d like to listen in to more arguments between Josh and Farrin – keep an eye out for CityMag’s forthcoming podcast, Third Wheel, on a website (probably this one) near you soon.

I ran the pitch by our editor who immediately gave it the rigorous appraisal to which every story is submitted (regardless of whether it’s coming from the publisher or not). The pitch came up short. Apparently, it’s a nice anecdote but not a story.

I bargained with her – if I wrote the story and took the photos myself – could we still do it?

“Sure,” Farrin said, “but maybe it won’t ever get published”.

I bloody love the Exeter Hotel. I love everything about the pub, its vandalised bathroom, its laconic and effortless style, its idiosyncratic staff, and the enigmatic owner-operator – Kevin Gregg.

But most of all, I love parking myself in the front bar with a frosty schooner of Coopers Sparkling Ale and just staring up at the shelves of collected detritus that seem to capture moments of Adelaide’s recent timeline.

TOURIST DIES OF THIRST – reads a headline from The Advertiser, blu-tacked to the wall.

Nearby sits a framed full-page advert KWP! made for Coopers when the River Torrens flooded – its a clever snipe at Lion Nathan, which was attempting a hostile takeover of Coopers at the time.

And, of course, there’s the photo of a slightly obscured Nick Cave (with that other guy), that serves as a sort of initiation into Exeter Hotel culture when someone inevitably points to it and asks, ‘Do you know who that is?’.

I wanted to write about the painting by George Aldridge called Flinders Granges. It has long hung in the front bar of the Exeter Hotel, and recently sold to an Adelaide IT expert who lives in London. The London-based expat bought it for a friend who lives in Singapore.

I wanted to write the story because it’s the sort of anecdote that does more to define South Australia than all the golf umbrellas and lapel pins put together.*

The State Brand is fine. It’s a tool and I believe the Government and South Australian businesses are using it competently to articulate our global position as the home of great art festivals, abundant natural resources, a clean environment, and producer of premium food.

But these messages and the State Brand logo itself seem to be aimed at a global audience.

The logo is helpful on the shelves of a Foodland, when you’re trying to choose between marmalades, but as a device which speaks to local pride and identity I’d argue there are myriad more things by which South Australians would choose to define this state.

Penfolds Grange could well be at the top of everyone’s quick list.

George’s artwork is landscape portraying the iconic geological formations near Wilpena Pound in the Flinders Ranges. The landscape is beautifully rendered in thick paint and a burnt colour palette, which might indicate a mid-afternoon sun overhead.

And then there are these giant bottles of Penfolds Grange Hermitage plonked in amongst the spinifex. 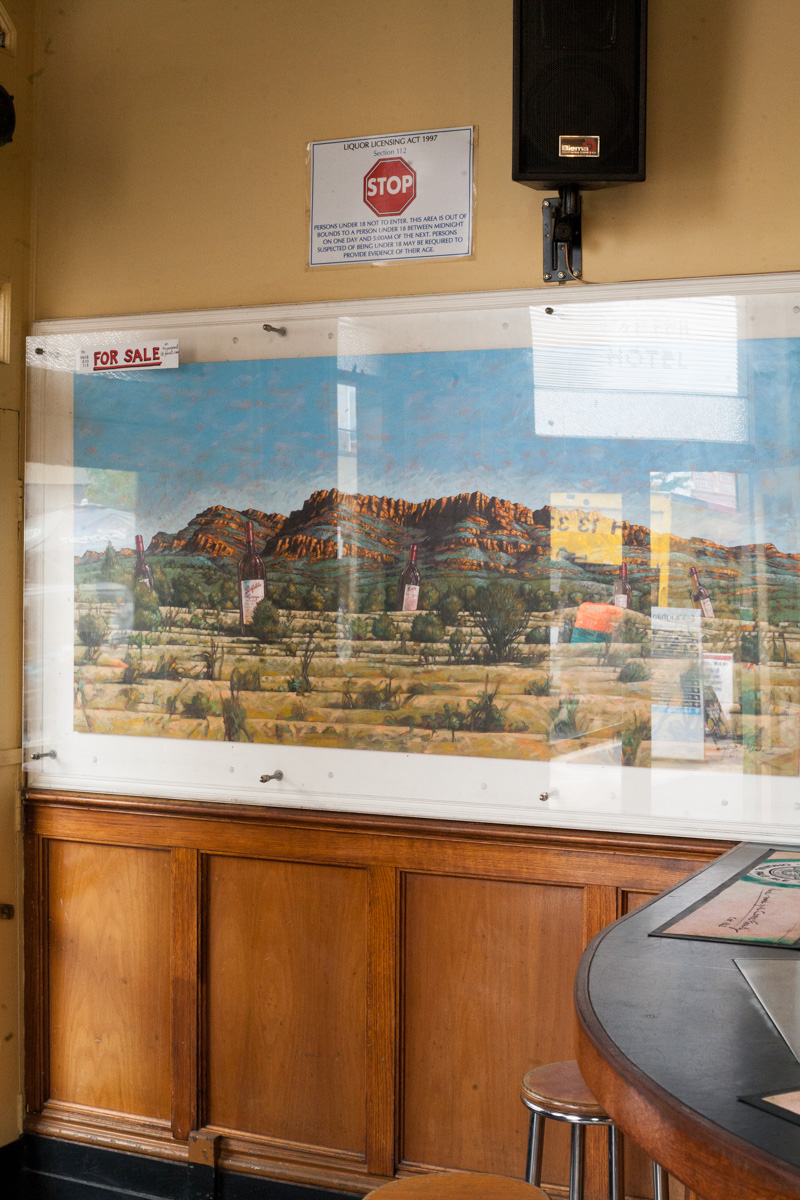 “That’s the two sides of me, that’s my sort of bi-polar existence,” says George. “A painter and a cartoonist.

“The cartoon work is really what allows me to be a cynical bastard and get everything off my chest basically. Painting is my true love and I went through art school as a painter. It’s my meditation basically.”

On the day George sold this painting he was on his way into town, walking to the Exeter – his “second office” – from his studio in Kent Town, when his phone rang with the buyer on the other end.

“He was buying it for a dear mate of his, another ex-pat who’s in Singapore,” says George.

“The buyer just said, ‘I like surprising him with really nice presents.’ And I went, ‘Oh, okay…’ and they sit down and drink a lot of Grange together. So I thought, ‘he’s doing well’.”

George and I sit and talk about this anecdote for a while. We touch on his life in the Flinders Ranges and how beautiful it is up there and how he supplemented his artist income by helping shearers, teaching in the local school as wells as volunteering at the local footy club as a coach.

He and a taxidermist mate once put on an exhibition up there in a local shearer’s shed. 400 people came to opening night.

George explains the eureka moment when he came up with the portmanteau concept, Flinders Granges, and how obvious it was to him to combine two of our state’s icons in one beautiful but hilarious painting.

What he never could have guessed at this moment was that his idea would resonate so strongly with a stranger visiting from the other side of the globe.

But that’s the power of a great brand.

In this anecdote I see three powerful components all working together to tell our state’s story.

A painting of a geological formation some 650 million years old.

A painting of one of the most highly sought after wines in the world. A wine originally made in secret by Max Schubert after Penfolds ordered him to cease production.

A painting by a bloke called George.

And it’s this final thing that a logo can never truly capture – the person.

Sure there are tacky graphic identities out there with stencil type renderings of a businesses namesake but it’s impossible for a logo to ever truly convey the character of a human.

As the millennial generation races to define their personal brand online, aided by various social media platforms and augmented reality plug-ins, you’ll find George leaning on the bar at the Exeter having a chat with Kevin.

He’s a part of the community of world-class humans there who’d pull over on the highway between Hawker and Parachilna and help you change your tyre. He’d shout you a beer if you were running dry this week, he’d talk about bullshit, and he’d talk about real shit just as easily.

George is a good bloke – that’s why I’m writing about him. And if the way our state talked about itself had more focus on the good blokes and women who populate our town, and their uniquely South Australian qualities, we’d probably all feel a little better about where we live.