The million-dollar Hindley Street Music Hall is currently “a massive hole in the ground”, but co-owner Craig Lock says in a couple of months it'll be "a world-class music venue.” 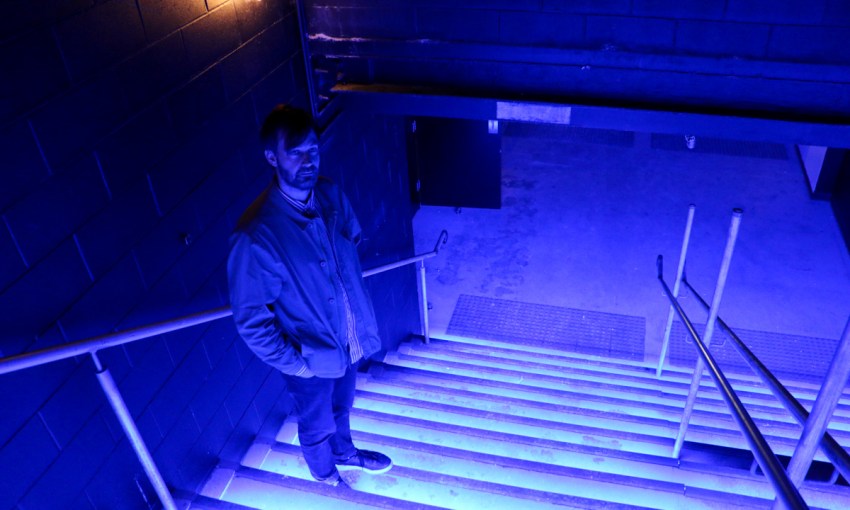 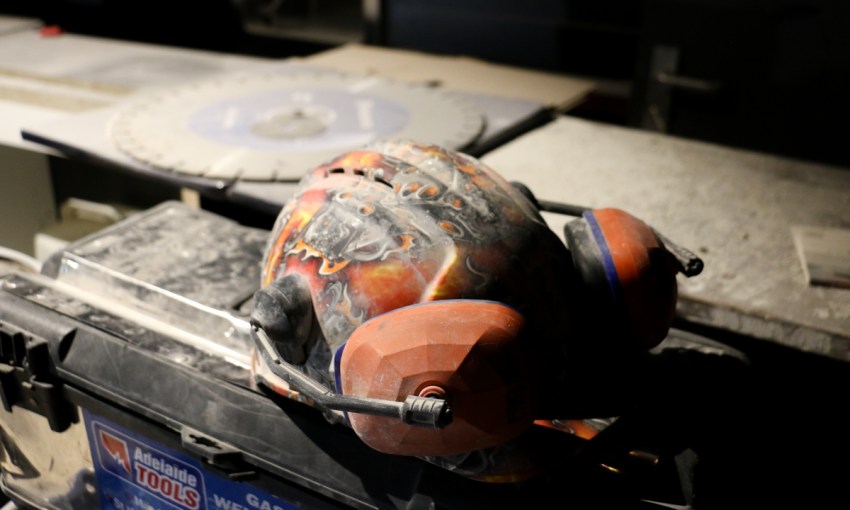 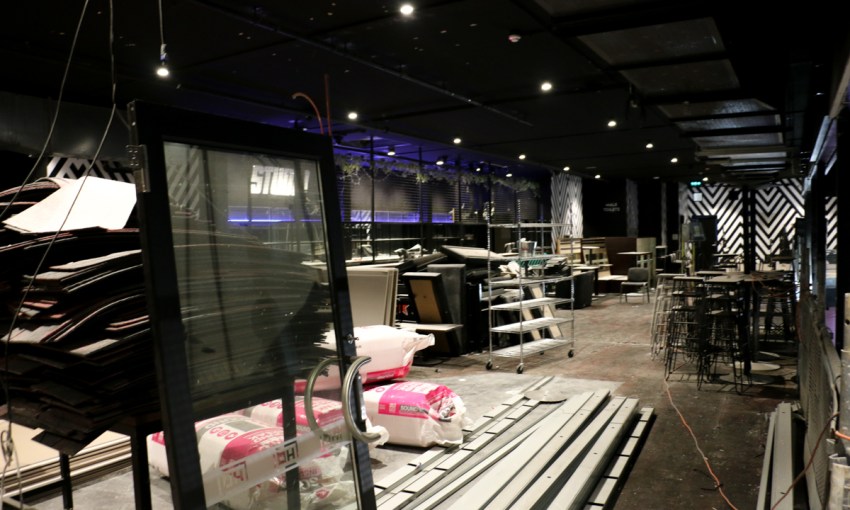 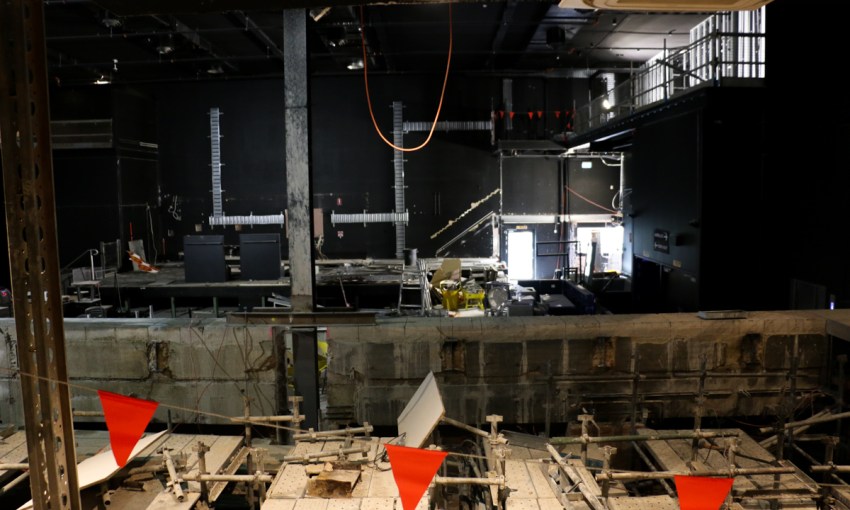 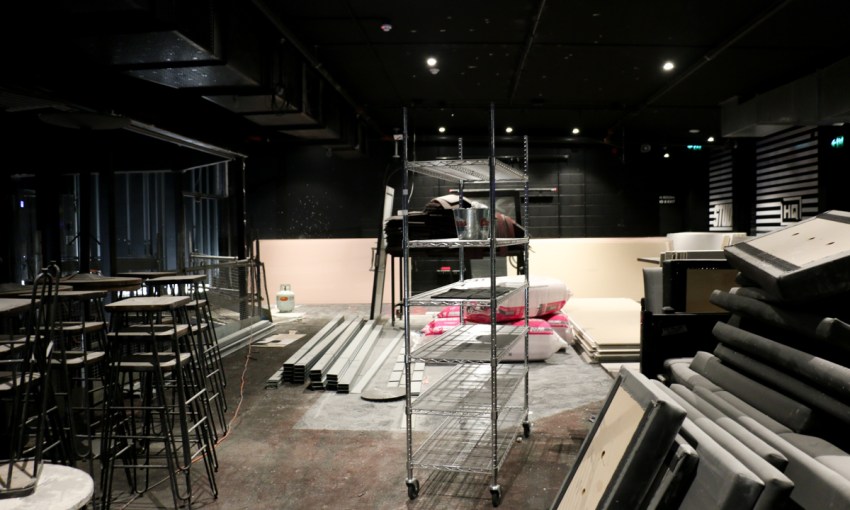 Without the big ‘HQ’ sign glittering in the distance, we almost get lost amid the party precinct – but Craig stops us outside the multi-storey property. Through locked doors, and stepping over litter, we ascend the neon-lit staircase and enter a full-blown construction site.

“At that top end, things are big business – big money, big risks, big rewards, scary. Being involved in that level now, you can see it is concerning,” he says. 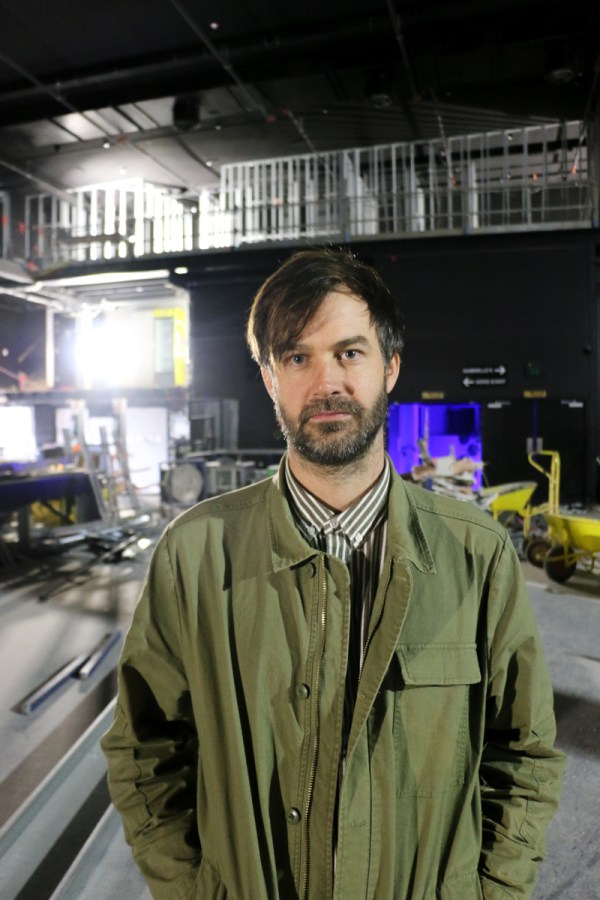 We walk through a hollowed-out doorway and into a dust-covered venue. There is machinery and hard hats, exposed concrete and scaffolding. It’s the former home of the short-lived Hindley Street iteration of long-running super-club HQ. In two months, the venue will be an 1800-capacity live music venue.

“We’re here and we’ve got a massive hole in the ground,” Craig says, looking across the site. “In six to eight weeks this is meant to be a world-class music venue.”

In March 2022, news broke that a consortium of music heavyweights and companies – Secret Sounds, Live Nations and Five Four Entertainment – would open a $6m live music venue on Hindley Street in August this year.

The Hindley Street Music Hall will be a venue-for-hire and accommodate international and national arts groups and bands, with seating and standing options available.

“We’re going to get everything,” Craig says while navigating around a sharp drop off.

“We can already see that from what’s announced.

“We’ve got Karnivool, which is a heavy post-rock band; Hanson; Kehlani got announced today, who’s like hip hop, R&B. There’s a Pub Choir show, which is like a singalong thing, which might be more akin to what would happen for the Fringe.

“They’re talking to comedy promoters about doing sit down comedy shows. We’ve got a Greek performer who’s doing a table, sit-down-and-watch kind of vibe. We’re trying to make it so you can do different types of shows.”

There is a large faded poster of WWE wrestler ‘Stone Cold’ Steve Austin behind one of the doors and, we recall the time we visited HQ to see a Riot City Wrestling match years ago. We sat in a chair on the ground floor. 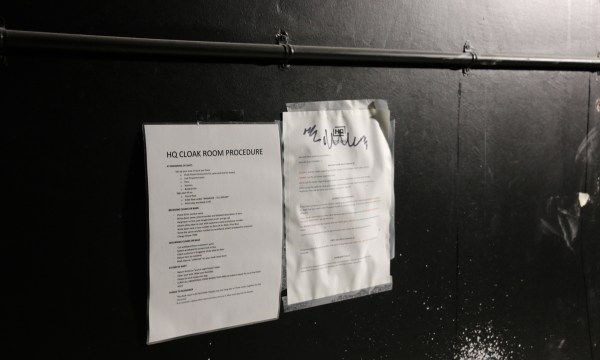 The venue had three levels back then – the lower level for standing (but could accommodate fold-out seats), the second for booths, and the upper tier had standing room and a bar.

Craig estimates they’re keeping 70 per cent of the original venue, but are pulling the second tier.

“For me, it’s all about sightlines,” Craig says. “You want to have people look down on it. We’ll be able to have 1000 people standing on the ground watching the show.”

People have been saying that about us: ‘Why we do feel like these guys are doing everything?’ It’s, like, why wouldn’t we?
—Craig Lock

For the fit-out, Hindley Street Music Hall’s design and interior architecture team leant into materials already present in the venue, such as concrete and steel. Craig says those resources are ideal as they can cop “a bit of a beating” from live music crowds and still look good.

“The colour theme of the venue is black but the logo is going to be like an orange Edison bulb,” he says.

They’re also spending money giving the walls proper acoustic treatment. “We’ve got acoustic engineers putting sound batt insulations inside of up and on the walls here so it doesn’t bounce around. It was never done [at the site before],” Craig says.

A curtaining system will also be installed. This will close off the upper tier, meaning if an act or band wants to create a more intimate space, they can draw the curtains above.

And, to satiate the appetite of clubgoers and those who may have frequented HQ in its halcyon days, the venue will also operate as a nightclub, run by Penny Hospitality entrepreneur Hugo Pedler.

Hugo is the managing director of Lion Arts Factory – another Five Four Entertainment live music venue on North Terrace – and a range of other local hospitality businesses and ventures. 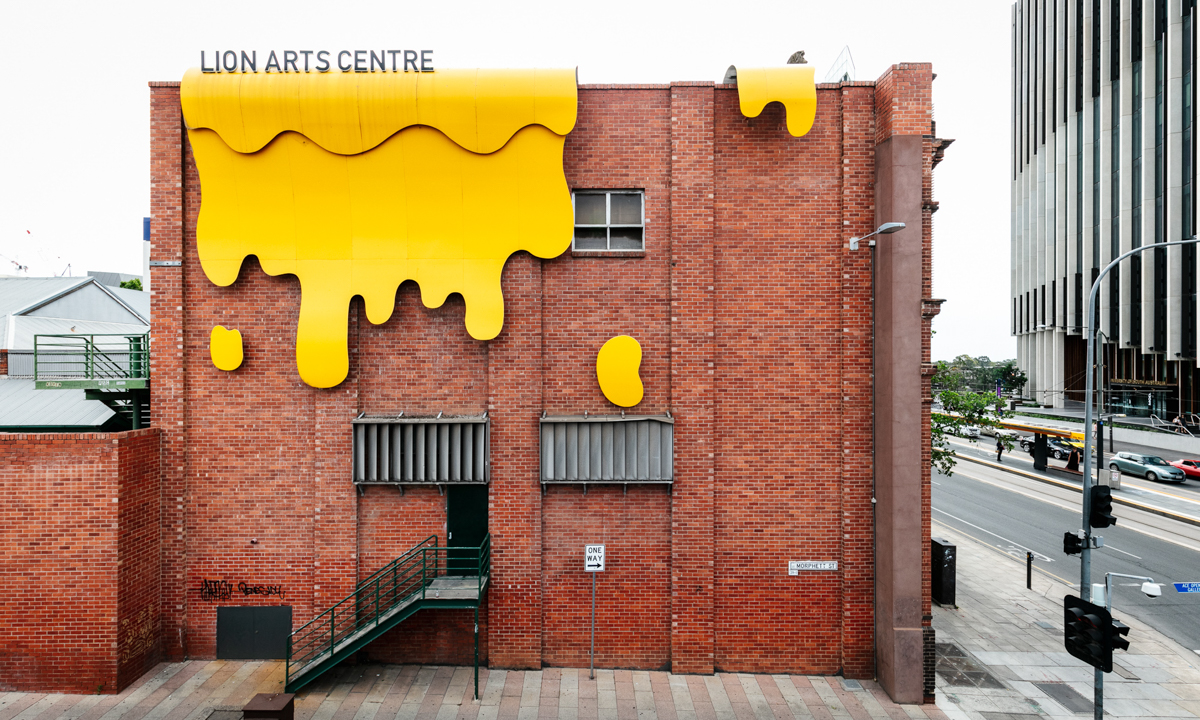 Heaps Good is a spin-off of the successful interstate Falls Festival, (not to be mistaken for their other sold-out festival, Spin Off, which fleeces artists from Splendour in the Grass). Held at the Adelaide Showgrounds on Friday, 6 January 2023, the festival features a loaded bill of international and national drawcards, such as Arctic Monkeys, Peggy Gou and PinkPantheress.

Craig says the festival’s announcement has received a strong reception so far, going by whispers in the industry and Facebook comments.

“We were a bit worried about it, as you always are, when you’re doing something that big,” he says.

“You need to sell a lot of tickets and have a really strong reaction to know that it’s going to work.

In October last year, Five Four Entertainment were in a very different position. They had recently lost two key employees, and needed $500,000 to keep their music events business, and Lion Arts Factory, from collapsing.

Although they lost those two staff members, they’re currently advertising for new employees, as the company can now host events due to relaxed COVID-19 restrictions.

They did eventually receive a monetary lifeline by the government, and are now not on the brink of ruin, too.

Things are looking up for the company, but Craig says he’s still practising caution. “That scepticism in the back of my head is always there,” he says. 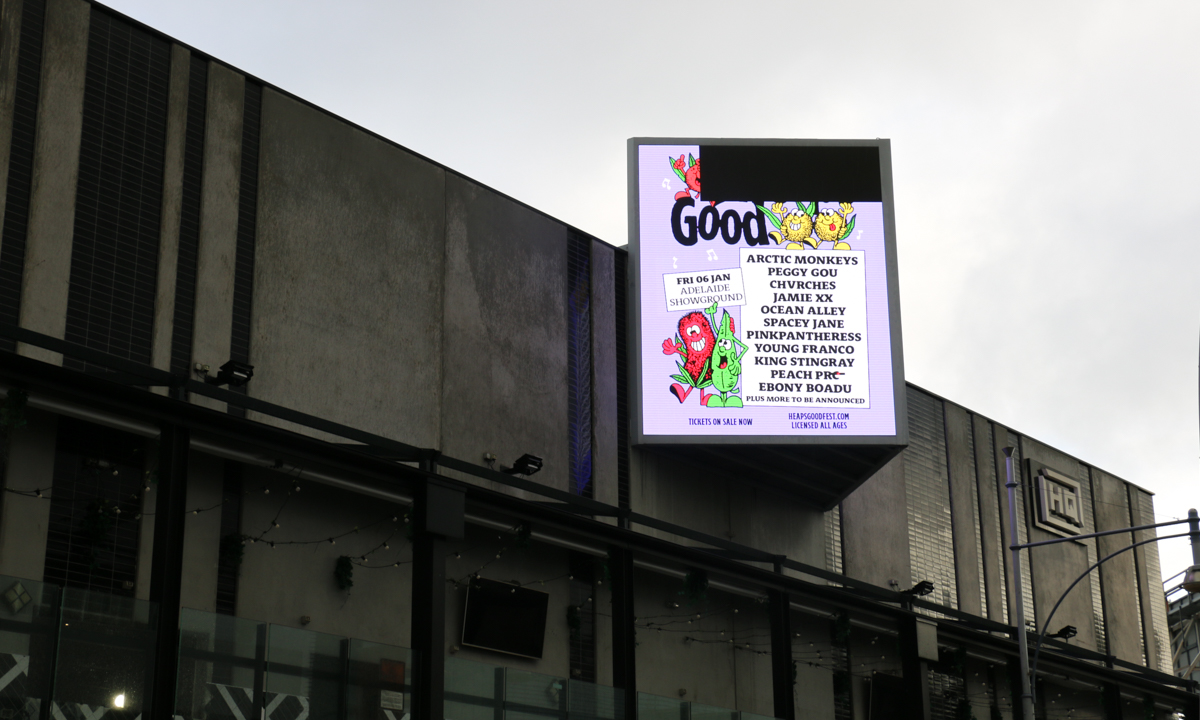 It’ll be better than good

Craig is also playing humble. When asked whether Five Four Entertainment wants to monopolise the city’s live music scene, he says the company is merely doing good things. They put on shows “people would want to go to”.

“It’s not a master plan to monopolise,” he says.

“People have been saying that about us: ‘Why we do feel like these guys are doing everything?’ It’s, like, why wouldn’t we?

“In my mind, it’s just opportunities that are out there. We’re just doing things that we think are going to work and ultimately are good for punters. That’s what it comes down to: people want to go to music.”