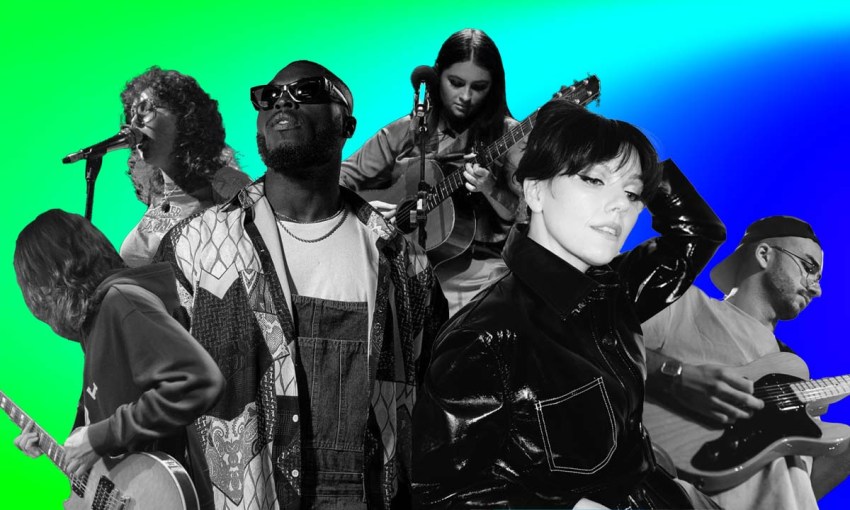 Last month, we presented to you a single from Heaps Good Friends’ second EP, Heart to Heart, and within a matter of hours local electronic musician DJ TR!P dropped a remix on us. TR!P’s take pitches down the hyper-pop glow of the original, slowing things down enough to find some softer R&B-feeling rhythms. Emma Fradd’s vocals have also been pitched lower, and chopped up to accentuate the breathier moments of her performance. Running for almost six minutes, the remix at times sounds awash in audio grain akin to a Washed Out track, but will every so often break with a crisp drum fill, making for a kinetic listening experience. (JVE)

Listen to this playlist on Apple Music or Spotify.

An overlooked late-May release (look, we’re busy people), ‘Owe You’ is Annie Bass in ballad mode. It builds slowly from a spacious, reverberating emptiness to a warm, swelling ocean. Vocally, Annie is dark and sorrowful – creating a song to sway alone to in the pitch-black dark of a crowded larger venue. (JVE)

While we love artistic and opaque lyrics, it’s refreshing to hear completely clear lines. ‘I’m feeling so healthy / I just want to be wealthy’ serves this purpose. These bars can be found on the new, strangely dissociative single ‘Feeling Like’ by Magajie, who also runs record label Adverse Resign, and the Word on the Street and SV’s parties. The rapper writes on Instagram he released the track – one of two – to mark a “new era” in his musical career. Interestingly, ‘Feeling Like’ is sparse SoundCloud hip hop, with Magajie waxing lyrical over flitting beats about capitalist dreams. Why be enthusiastic when you can be honest. (AS)

It is with great regret we missed this latest one from Tilly Tjala Thomas in our May roundup, but, given it was released within a few days of June, we’ve decided it’s worthy of inclusion this month. Tilly’s prior releases have been playful, youthful, and with simple melodic structure, while still imbued with purpose. ‘Mansion’ sound like a much more grown-up Tilly, venturing into club-ready pop beatmaking and lyrics exploring interpersonal dynamics. We’re excited to see the many sides of Tilly that we’re sure will come to like as her list of singles grows. (JVE)

There’s a voyeuristic quality to honeybeam’s psychedelic sound. The curio’s music seems, lyrically, to get within close proximity to firm subject matter, without every giving full shape to it. ‘those friendly people’ is the latest single released by the colourful indie-pop outfit, which swells in abstracted and clever lyrics, plus bright guitars, muted synthesisers and dreamy electronic drum pads. (AS)

Harriet Fraser-Barbour truly puts the “work” into Workhorse. We’ve said this before, but with the festival organiser and musician on vocals, guitar, drums, bass, organ, harmonica and lap steel on a new single from an eponymous debut album, there’s only a grand total of two instruments she doesn’t play here: violin and pedal steel guitar. The result is a jangly four-minute-twenty fever dream, with washed-out vocals and sun-bleached guitars providing a fitting backdrop for Harriet– aka Adelaide’s musical tour de force – to do her thing with surreal aplomb.

Country rock’s prodigal son Ricky Albeck summons Big Pub Rock Energy with breakneck guitars and blistering shout-singing for his latest single, ‘It’s Normal’. With help from an all-star line-up of local musicians, Jesse Davidson and Jess Johns, the four-minute burner is a departure from the musician’s former (and gentler) single ‘Hollywood’. ‘It’s Normal’ is a fast, fever-pitch, unapologetic maelstrom with the musician in the eye. (AS)

Mums Favourite — ‘Joan of the Arcade’

Out front of Smokelovers last week, CityMag spied a gaggle of youths clad in stereotypical ‘60s and ‘70s regalia – camp collar shirts with undulating, muddy brown designs, bright and busy thigh-high dresses paired with bright white go-go boots and the like. Rather than costume, it read as sincere homage, but it’s a curious decade for Gen Z to be harking back to. I don’t remember feeling any displaced nostalgia for my grandparents’ heyday. But perhaps, through the influence of the internet, time finally truly means nothing. Every decade can be explored in detail with a smartphone – outfits studied, and entire musical eras condensed into a shuffling playlist – and so what might seem like mimicry is simple sight and influence. The Smokelovers gang were wearing these influences well, and the same can be said for Mums Favourite, who are their own blend of ‘60s and ‘70s (and today!) psych-pop-rock. ‘Joan of the Arcade’ is full of throwback references – the arcade being one, as well as the construction of a magnetic femme fatale as the song’s central character – and switches between funk-inflected verses and psych choruses. It’ll take you back to places you’ve never been. (JVE)

Adelaide’s neo-pop-punk wellspring continues to bubble over, as Madura Green’s upbeat alt-emo returns to airwaves in the form of ‘Marriage Finger’. The band is ferocious in its energy as singer Jordan Tito belts about feeling out of touch (despite killing it of the most fun music genres of recent memory). (JVE)

Anthemic vocals, crushing guitars and fire-spark hi-hats make ‘Soak’, by four-piece colourblind, a hardcore-punk fan’s actualised fantasy. Lyrically rooted in bruising themes – the song opens with the line ‘wring my neck if I’m breathing’ – the single is juxtaposed against a fun and funny video clip. Together, they drip with sweaty and heavy summertime mania. (AS)

Lauren Bull — ‘Dreams Are For Sleeping’

Ok, once again, apologies – this was a late May release that we missed, but it’s too interesting not to include. At just one minute, Lauren Bull paints so vividly with such a stark canvas – just a piano, choral backing and a quiet and intimate delivery from the singer, coated in flange. The lyrics tally to about 50 words in total, but within them can be felt all the insecurities and anxieties of a burgeoning perhaps wasteful young adulthood: “getting lost in time, never knowing what I need to do to make things right. I’m scared they’ll tell me dreams are made for sleeping”. The sound production is rough, but the portraiture is masterful. (JVE)