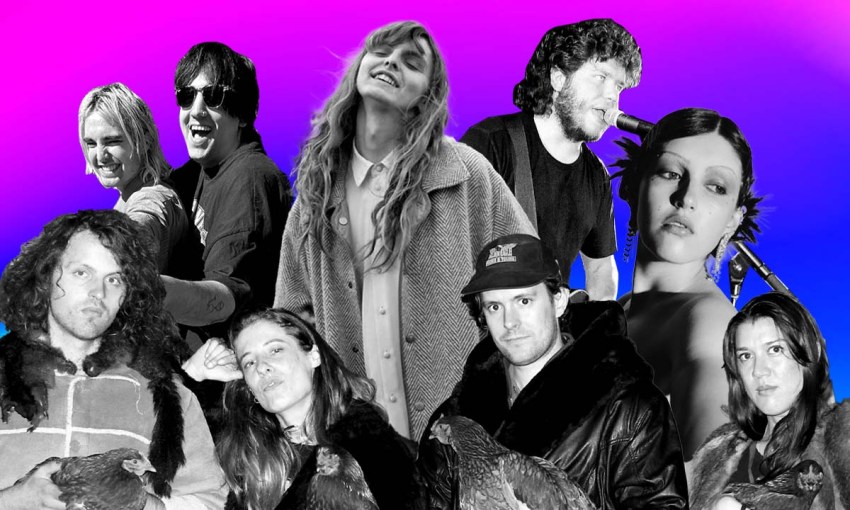 This song smacked me with its first line: ‘I’m in love for the first time / with big wide highways’. Ricky Albeck’s newest country-tinged single ‘Hollywood’ sets you up for a big, beautiful musical moment that (we think) explores the rocky road often travelled while falling in love.

Using glittering lights as a possible parable for the often-idolised idea of the soul mate, we’re taken on a rollicking ride through pretty guitar riffs, harmonies and lyrical imagery by our soul-searcher. But like any fling, the rose-tinted glasses eventually come off and the song comes crashing down with a heavy and distorted guitar solo. With dizzying highs and aching lows, it’s a feature-film distilled into five minutes. (AS)

Listen to this playlist in full on Apple Music or Spotify.

Although we can’t exactly hear what vocalist Thomas Katsaras is saying on ‘Seachange’, it doesn’t matter. The guttural screams over the maelstrom of jangly chords do their job. This noisy, alt-rock single comes off the back of the band’s recent release ‘Same Old Problems’ and shifts into higher gear while maintaining a certain lackadaisical quality.

As Thomas dispassionately murmurs ‘more of the same’ over and over, optimism is eroded like the cliff-face of an ocean. And as the song descends into blistering heap of swirling guitars and drums, reprieve is found in the form of a violin. A song to flay and dissect upon every listen. (AS)

The goodest of friends, Nick O’Connor and Emma Fradd, aka Heaps Good Friends, are on their way to officially releasing their second EP, Heart to Heart, in June. Before that hits digital and physical stores, they’ve put out the single ‘Snake Charmer’. Heaps Good Friends is always fun, and this aerobicise-appropriate ‘80s-inflected jam is exactly that: bouncy and danceable. Heart to Heart is being released on vinyl as a double record, with their debut EP Hug Me on the B-side. Pre-orders were sent out a week or so, but you can purchase your own copy here. (JVE)

Honeybeam – ‘Didn’t Know We Could Feel This Good’

Another stunning single from Swirl Record’s Bedroom Series mixtape, ‘Didn’t Know We Could Feel This Good’ is psychedelic, synth-pop, liquid gold. According to the musician’s Facebook page, the hallucinatory song is about “fun and changing” and has a smattering of samples, staccato keys and juicy bass lines. One to melt into. (AS)

Quiet songs make you lean in. Sometimes, you never lean out. Without fanfare, local band Sour Sob released a single called ‘hello, Star’ on Soundcloud. Filled with damp piano keys, glittering synthesisers and whispered singing, the song uses absent space to make lyrics like the ‘silence in the sound of your pain’ centre-stage. Gentle but not lacking in gravitas, this band takes a bite out of agony and sits with it. (AS)

Harriet Fraser-Barbour does it all. In ‘Chain’ she sings and plays lead guitar, bass, organ, harmonica and lap-steel. This is the first single off her upcoming album No Photographs, and rings in smooth-as-butter country made contemporary. Over the song, the instruments seem to dissolve into each other, turning it into into a mirage of Harriet’s smoky, spaced-out singing and ideas for the future – ‘think I need a change / things should stay the same’. (AS)

There is a coming-not-quite-of-age story at the heart of the most recent TOWNS release, ‘Season 5 (Break My Fall)’. In the song’s film clip, Aston Valladares and Daniel Steinert begin in their childhood bedrooms (complete with Nintendo 64 and a paperback from the Malcolm in the Middle book series) and graduate into a sparsely furnished studio apartment. The tell-tale mattress laid directly on the floor, no bedframe or ensemble base, hints that while the duo have grown up, there’s still some growing to do. Sonically, ‘Season 5’, which is the band’s first release since signing to Wollongong label Farmer and the Owl, draws from the pop-punk playbook, with punchy choruses and sparklingly bright guitars. TOWNS were on road for most of May and will wrap up their Keep on Swingin’ tour at Jive on Friday, 3 June. Grab a ticket here. (JVE)

Brash queercore punk trio Church Moms have released ‘Fight Me’, “a song dedicated to everyone who is tired”, as they described it to New Noise. It’s an energetic, lo-fi freakout that starts sparse but builds in intensity as vocalist Bridget Fahey issues a statement on being not-one-to-be-fucked-with. ‘Fight Me’ hit streaming services early in May, but the single is getting an official release party on 10 June at Jack & Jill’s Basement, off Pirie Street. Secure a spot here. (JVE)

Darkly layered and gritty, Stellie’s ‘Violet Girl’ was inspired by (the one and only) Dolly Parton’s ‘Jolene’. Like the anguished country classic, Stellie’s lyrics plea for a lover not to be tempted by the beauty of another woman – but the comparisons end there. Produced by Alex Markwell, ‘Violet Girl’ thumps with a heavy rhythm that doesn’t let up until the song’s very last moments. Stellie will embark on her first national tour in support of the single. Catch her at Jive in August. (JVE)

Paradise Club – ‘Move it in tha Back’

Lead singer of Paradise Club, Gere Fuss, says the band’s latest four-track EP Static Sounds is about appearances. “How you think you know life, but as you age it becomes more of a grey area,” he says in a press release.

One could assume ‘Move it in tha Back’ would a dancefloor banger by its title. Despite this, and the band’s predilection for “big lush pads” and sharp drum fills, it’s anything but. Something Paradise Club seem to do so well, and is indicative on this post-punk, emo-electronica song, is to avoid trends and aim for timeless. Four-to-the-floor house music is a Big Mood at the moment, and this slower, sappier song – rooted in direct lyrics and real instruments – makes it immortal. (AS)

The “euphoric techno reinterpretation” of Playboi Carti and Trippie Redd’s track ‘Miss the Rage’, by local producer Travis Cook, is a cocktail of ragged pop, gurning techno and primal hype. ‘Kiss_the_rage++**’ is filled with careening drum claps, searing synthesisers and instantly recognisable Britney Spears ‘3’ samples. Much like a nuclear explosion, when you hear this song ring through a club’s speakers, duck for cover. (AS)

One of several recent singles from DJ TR!P (otherwise known as Tyson Hopprich), ‘Humilitas’ is a haunting two minutes of slow-moving cello and intermittent radio static. It might be the exact depiction of beauty and sorrow you needed to hear today. (JVE)

Montaigne — ‘always be you (Lonelyspeck remix)’

In February this year, Sydney-based musician Montaigne released a delightful pop gem with David Byrne of  Talking Heads called ‘always be you’. Ever the generous artist, Montaigne lent the stems of the track to five Australian artists to produce an EP of remixes. One of the artists putting their production over the track was Adelaide’s Lonelyspeck, who’s put a pulsing neon-arcade layer beneath the song and some thrashy distortion over the top. The energy is high. Lonelyspeck has also recently released a playlist called PASIFIKAFUTURISM, highlighting Pacific Islander artists who are “expanding sonic horizons”. Check it out here. (JVE)