In October last year, CityMag was introduced to Forage Built – a collective building what it hopes will be a solution to homelessness.

We visited the site where the Forage Built housing pod, called the Calyx 16, was being built, and heard from the co-founders about the underlying business model.

The pod is designed as a single-occupancy dwelling, which includes a bedroom, bathroom, storage, verandah, and a small kitchenette – all within a 16sqm foot print.

This structure is designed to exist within a larger village of pods. The village would include a communal kitchen area and one pod designated for a social worker or service provider.

A person experiencing homelessness who is ready to progress to long-term housing can use the pod as an interim housing option, while working with an on-site homelessness service provider to help them pick up the skills needed to transition to traditional housing.

For the Forage Built concept to work, we were told at the time, three entities are required to come together: a landowner, a financier, and an operator.

The landowner would provide space for the pods to be built, the financier would front up the cash to construct them, and the operator would provide services to the people living in the pods.

In some instances, all three pieces of this puzzle might come from one company, or it might be a coming together of several parties.

Importantly, Forage Built’s founders designed the underlying business model to be adaptable to whatever will get the project up and running.

The founders also started this initiative with an abundance of patience. They knew that to be able to sell the idea to prospective partners, they would first need to have something tangible to show people.

Finally, this day has come. 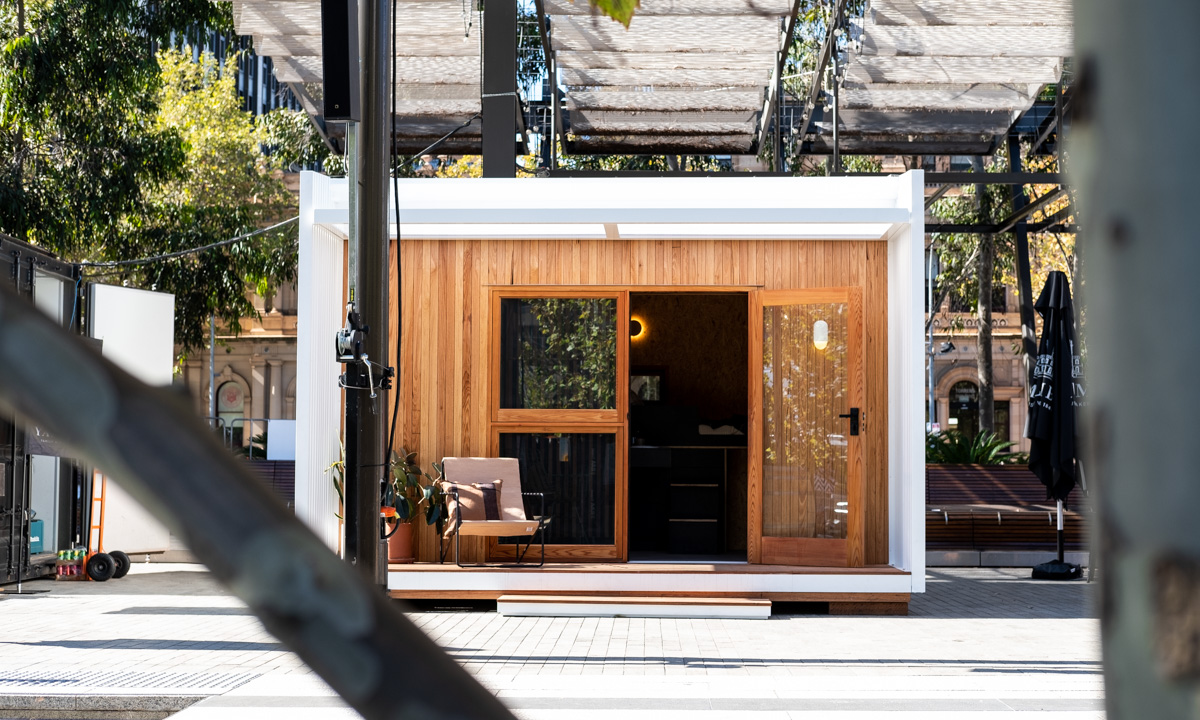 “Having a tangible is just so massive for us. People can see, touch, feel. It’s just so much more than having it on a piece of paper,” Scott says.

“The whole idea is to get some feedback from it as well. It’d be great to get people with lived experience coming through again and being like, ‘Alright, potentially that’s not needed; this is needed.’”

The pod, which is situated on the eastern flank of Tarntanyangga Victoria Square, will be staffed by members of the Forage Built and Hutt St Centre teams throughout Tasting Australia. Hutt St Centre is one of the initiative’s major sponsors, and Scott has volunteered there for more than a decade.

The organisation was also a facilitating factor between Forage Built and Tasting Australia.

“So through that, he’d been in the loop with this project. Each year I was keeping him up to date with where we were going.

“The team behind Tasting Australia, when we pitched it to them, they were very community-minded, so it was a great way to show South Australia.

“Even if it’s just to get people talking about homelessness again… because JobKeeper’s finishing up now, there’s some pretty scary numbers of people becoming homeless who have never been homeless before.” 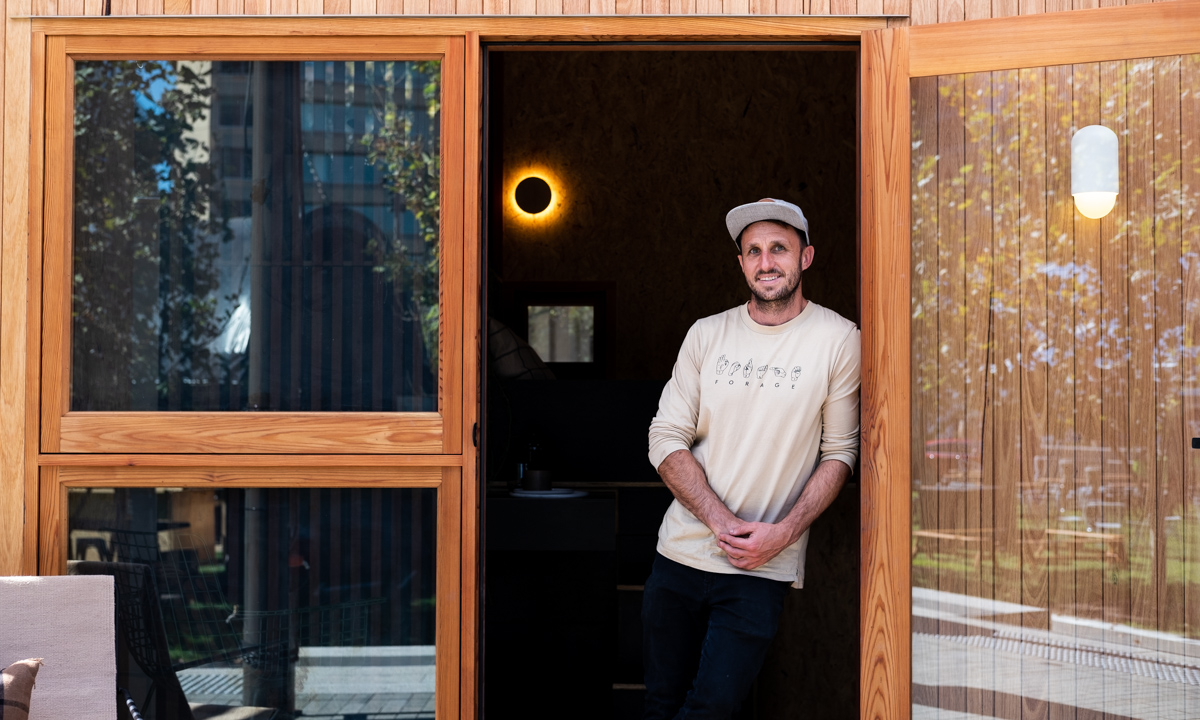 Raising awareness is only part of them aim of Forage Built’s presence at Tasting Australia. They also hope to raise funds, in order to build the first Calyx 16 village, in partnership with the Hutt St Centre.

“Housing isn’t going to solve homelessness, community will, so we’re looking to create our first village with the Hutt St Centre, with the Village Project is what it’s called at the moment, to build a little, small cohort of five to six pods, with the communal pod, with the pod for the caseworker,” Scott says.

“We’ll then look at trying to get our social café in there, through Forage Supply Co, to get some work opportunity, and then making sure we’ve got the right people in the housing sector in there.

“The big thing is then to get some research behind it to see what a small village concept looks like. And then it can be a legacy, where we can go, ‘These are the key stakeholders you need. This is what we’ve found through our findings. This is the best way that this concept will work.’”

You can donate to the project directly now at the Hutt St Centre website. The current goal is to reach $80,000. 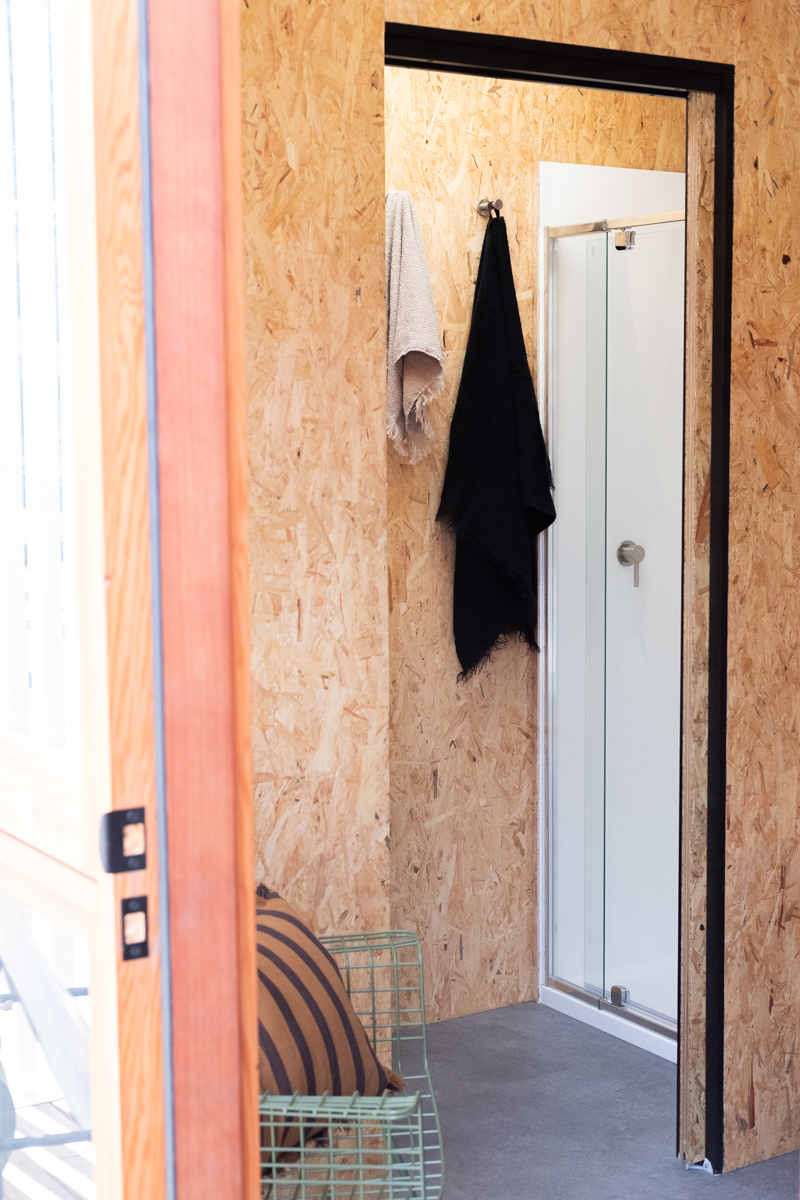 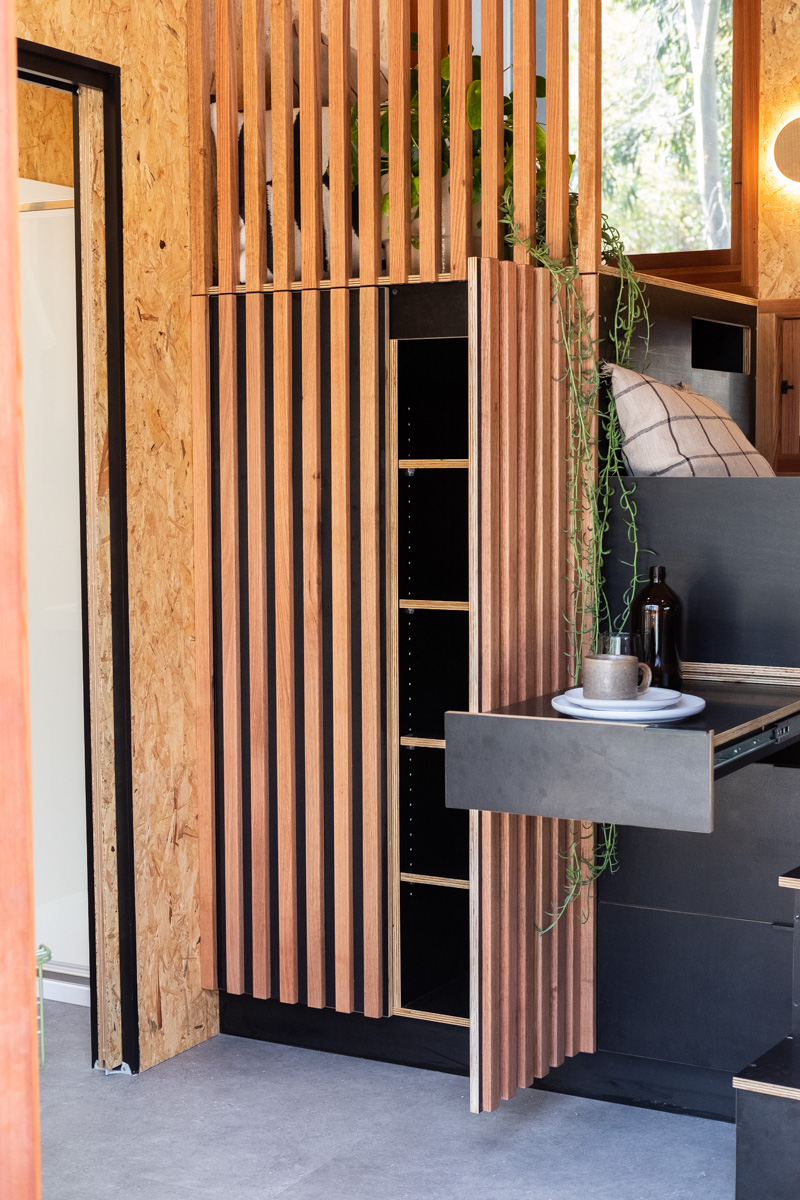 Above: Ample storage, and an in-built shower and toilet

Revisit CityMag‘s visit to the Hutt St Centre where we got to know some caseworkers. The organisation recently suffered a more than $1 million funding cut.

At Town Square, the Calyx 16 pod is situated right next to the Yalumba bar, which is no coincidence. The winery has produced a “community wine” in collaboration with Forage Built – a “juicy, light-bodied” grenache, called Homefullness – with 50 per cent of every $120 12-pack sold going to the Village Project.

Each purchase is a pre-order, and the wine will be ready to be delivered within a month.

To find out more about Forage Built and the Calyx 16, visit Tasting Australia’s Town Square any day between now and Sunday, 9 May (excluding Monday).

You can also read CityMag’s feature on the Forage Built here, and donate to the project at Hutt St Centre’s website.