Despite the efforts of many hardworking organisations, homelessness persists on Adelaide streets. Forage Built has developed a new housing solution they say has the right mix of community, dignity and opportunity.

In a shed in Beverley, eight kilometres northwest of the city, a vision five years in the making is coming into reality.

It’s not much to look at when CityMag visits – just bare timber bones on a raised platform – but this is the early stages of an Adelaide-made solution to housing for people experiencing homelessness.

This story was first published in CityMag Print Edition 29, on streets from 23 October 2020.

The project is called Forage Built, and it’s where Forage Supply Co founders Scott Rogasch and Justin Westhoff had always hoped their social enterprise would end up.

Scott first started volunteering with Hutt St Centre while completing a sport and recreation management degree 10 years ago, and, through the Forage food truck, he began hiring clients from the Centre.

As the Forage brand has grown, Scott and Justin have provided more opportunities for people experiencing homelessness – including paid work picking and pruning vines for the Forage Supply wine label.

These are substantial opportunities, but Justin says it hasn’t yet felt like they were making a meaningful difference.

“What we’ve found in the past is what we’ve been doing is a little bit of a Band-Aid fix,” he says, “whereas actually having a bigger impact and having this project hopefully up and going in the next little bit is… a lifetime goal for us as a company.”

“[We’ve] been able to get 4,000 hours of sitting with people with lived experience, to hear what the issues are on the street, what the housing issues are,” Scott says. “Through that, we started to work together on designing how we can become a part of a solution here.”

This is a bigger task than can be achieved by Forage Supply Co alone. Scott and Justin brought the idea to Tim Pearce of Frame Creative, who designed the Forage’s graphic identity and has been “a mentor” for the duo.

Tim was told of their grand visions for the project when they first met, which seemed lofty and idealistic at the time. But it resonated with Tim’s desire to find meaning in his work.

“I was in that headspace, but it probably took two or three years for me to see how committed the guys were and how persistent they were. And I think how genuine as well as talented at what they do – which is sort of hard to define, in a way. It’s the chutzpah of it. It’s the vibe.”

Forage Built needed to become more than just an idea. Tim reached out to Andrew Steele, Director of Studio Nine Architects, and Zoe Steele, Contract Administrator with Commercial & General, to create a design. Together the team developed the idea for a single-occupant dwelling called The Calyx Project by Forage Built. 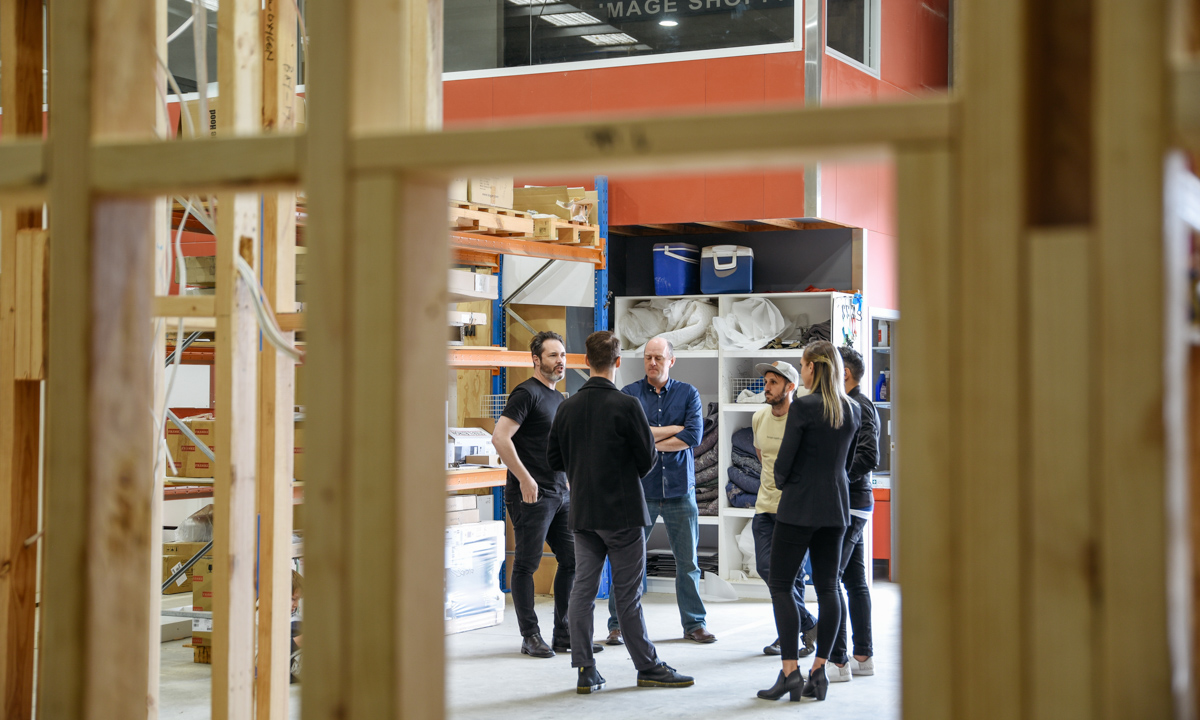 The timber structure behind us, currently being built by Oxygen Building Group, a major sponsor of the project, is the first Calyx 16 prototype.

The prototype has a 16sqm footprint. “Every square metre in there is working pretty hard,” Andrew explains. “Each pod sleeps one, with its own en suite, small kitchen and ample space for storage throughout. Overlapping uses like the raised bed above the study nook triggered the need for additional height and unlocked the opportunity to push the conventional idea of what a ‘pod’ could feel like.

“The main area pitches up to 3.6m in height, with large windows connecting to the outdoors and allowing access to natural daylight and ventilation. We’ve created a generous, but intimate space, that can be tailored to each individual.”

The first Calyx 16 will be built using robust and sustainable materials. Forage Supply Co’s ethos of “maximum impact on community, lowest impact on the environment” informed all design decisions in the project.

“The level of design consideration and generosity is clearly present in the volume and this commitment will be delivered in every inch of the pod, which is all for the benefit of the end-user,” Andrew says.

“From a dignity perspective, it’s huge,” Scott says. “People have been on the street and they’ve been going through a tough time. If they get put in a house that’s rundown and there are bad people around there, it’s not good for them in the healing process.

“To get brand new fittings, a house that’s been purpose-built and architecturally designed with open spaces, it’s amazing.” 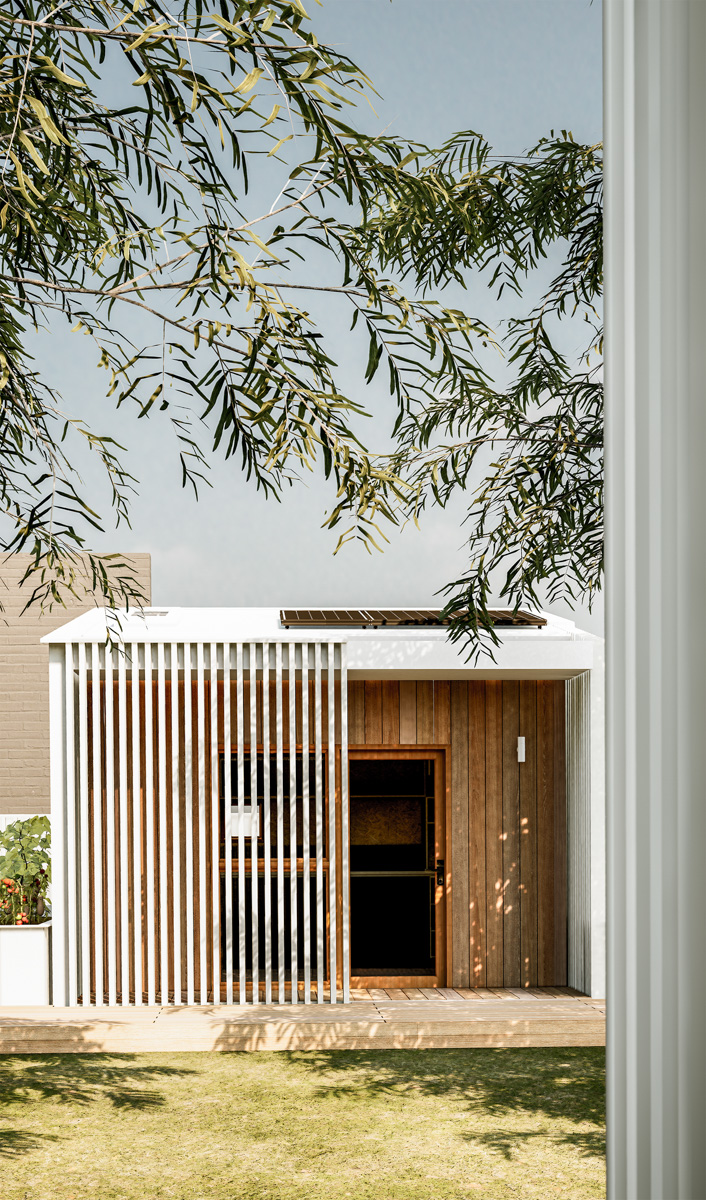 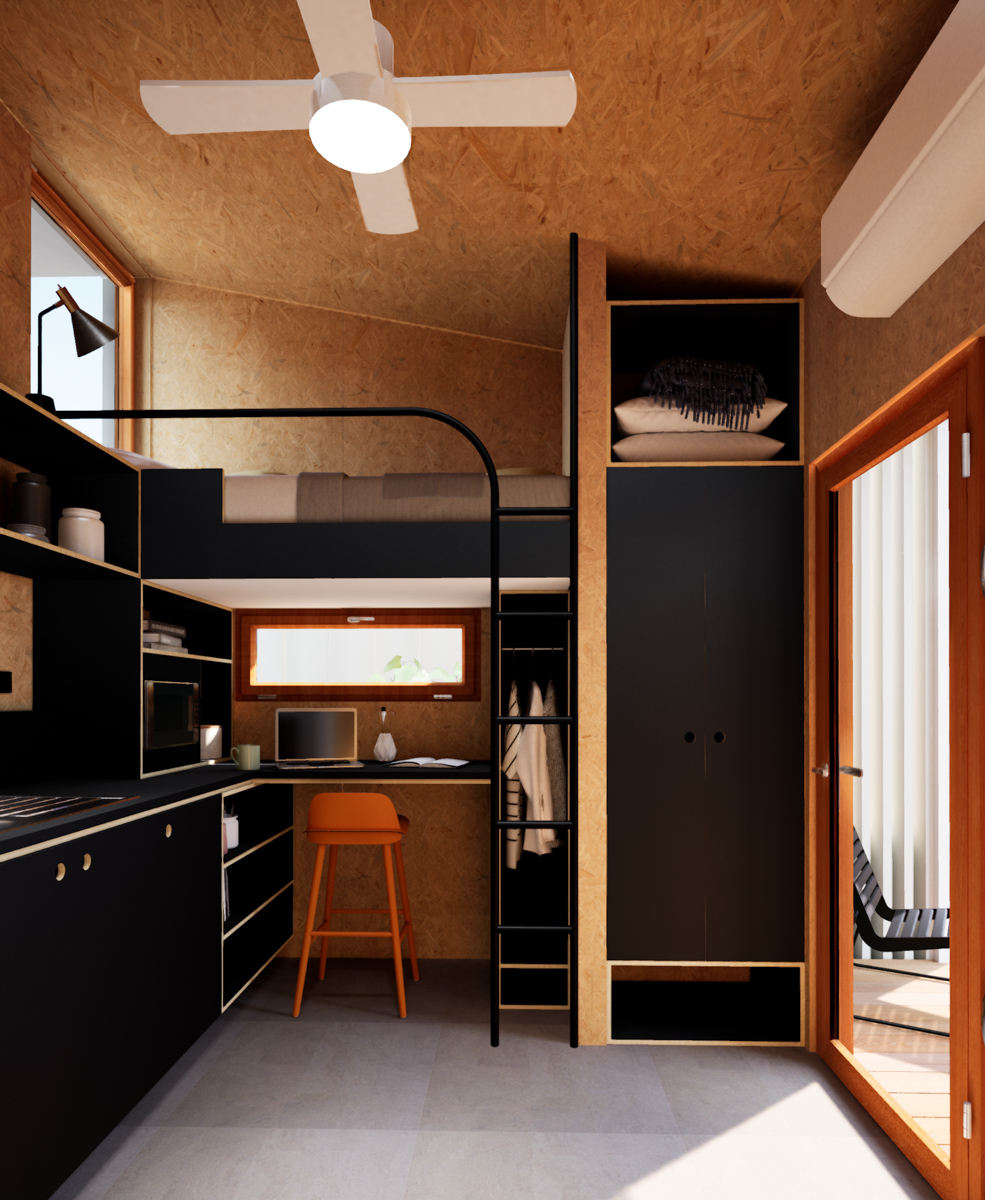 Interior and exterior renders of the Calyx16. Photo: Treehouse 3D

The Calyx 16 home is not designed to exist in isolation; they will be built in a community of pods, each separated by a veggie patch that each occupant can call their own. In the middle of the plot there will be another larger pod which will act as a communal space, where events or skills-based workshops can be held. This structure will have extra office space for a case worker or counsellor from a homelessness service, who will also have their own Calyx 16 dwelling onsite.

This community-focussed design came from surveys of people experiencing homelessness here in Adelaide and in Melbourne. The balance is in allowing residents to feel safe, while also providing meaningful opportunities for connection.

“When we surveyed those experiencing homelessness, the results showed these people like their own space, they want their own things and to be independent… that’s what feels safe to them,” Zoe says. “Conversely, because they’ve spent a lot of time alone, living on their own, they still have a need to interact with others. Humans like to have relationships with other people, so it’s a balance of both.”

“Housing is not going to solve homelessness, community will,” Scott continues. “We’ve put in the design to make it feel as homely as possible, but a huge part is having community gardens, having the communal spaces as well.

“The other opportunity we’re trying to give is employment opportunities. So through having these controlled environments, we can… get you a house, we can get you some employment, you can get some support, and then also work your way up. You can get back into society, or this can be your long-term [home].” 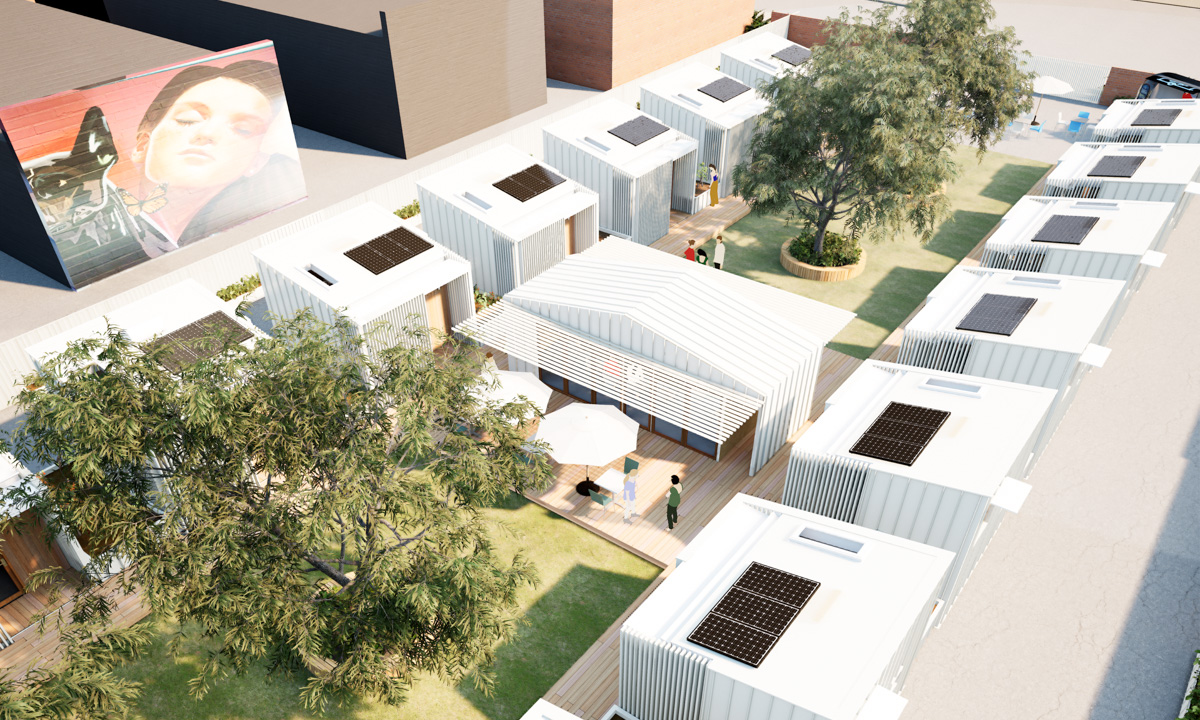 As for the underlying business model, the group brought on Carsten Dethlefsen, Director of Proprius Advisory.

“To get this up, there’s three pieces we need: we need land, we need funding, and we need an operator. And that can be the same entity all the way through, or it could be three different entities. The way we’ve structured this is that we can do it with two, or three, or one – whatever it is.

“What we’re trying to set up is something that’s an affordable build, that’s flexible, that doesn’t require a big outlay of land purchase, so structuring different transactions that way… But then having it so that whoever ends up with it can actually keep it running.”

The group has pitched the idea to organisations in the homelessness sector to some success already. Hutt St Centre, Beyond Bank and Lorrequer Wealth and Advisory have given financial support to the project as major sponsors. They have also been supported by Studio Nine Architects, Proprius Advisory, Frame Creative, Revolution Roofing, Reece and Treehouse 3D, who have given in-kind support to the project.

The response they’ve had so far is testament to the character of the group, Tim says.

“Putting the people together that had the heart, that were chasing outcome first and let the social enterprise happen second was probably the key,” he says. “These guys have it in their heart to do something and contribute, and so it makes the conversation a lot softer and a lot more malleable and a lot easier to work out what works.” 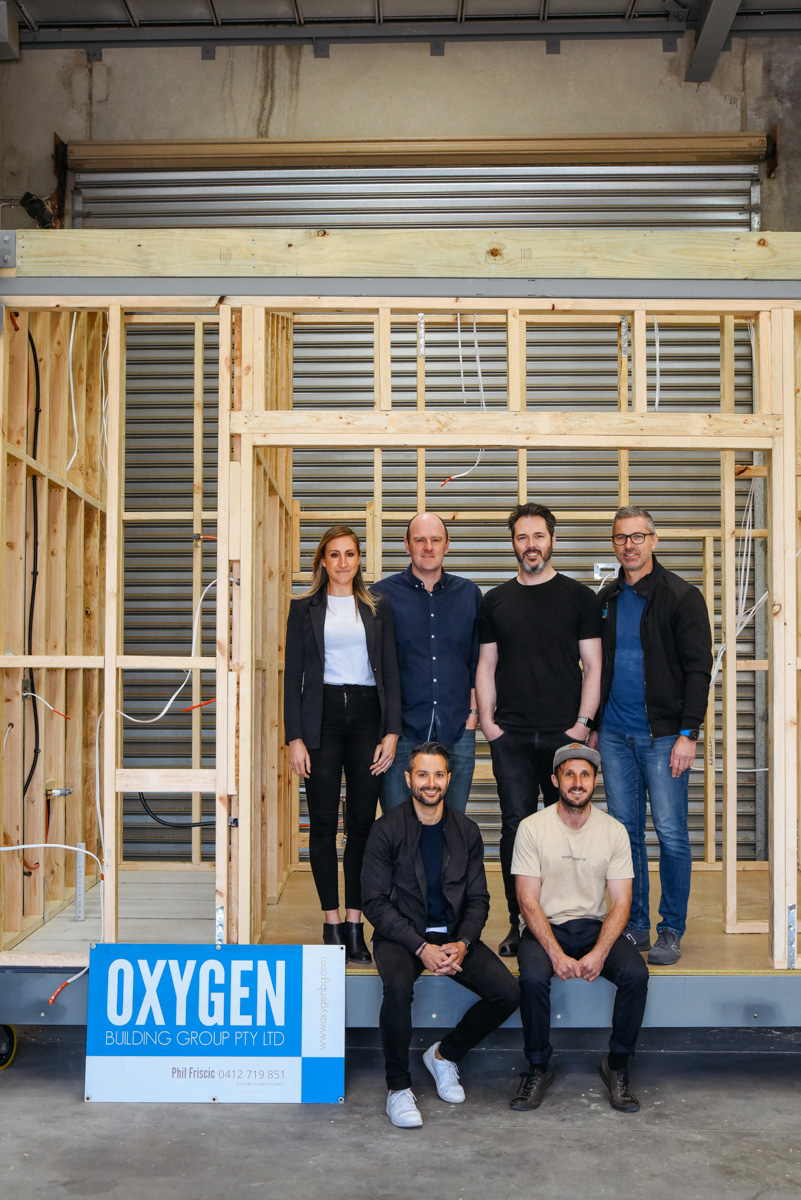 The group is aware there are many people who have tried to provide appropriate housing for people experiencing homelessness, but with limited long-term success. Even the State Government’s recent use of motels to house people experiencing homelessness during the coronavirus pandemic didn’t result in mass migration of rough sleepers off the streets.

“That has been built many times over in different variations. That’s not a new technology,” he says, pointing to the Calyx 16 prototype. “But the actual whole offering, the sustainable model that sits behind it doesn’t exist properly yet.”

Forage Built has the advantage of the group’s broad skillset, but they’re also banking on the ‘chutzpah’ Tim identified earlier. The proof of their concept will be in their ability to bring together disparate parties interested in providing a solution to homelessness but who haven’t previously worked together.

“So there’s a huge amount of goodwill, there’s not so many insurmountable roadblocks, but there’s just no one actually taking on responsibility of coordinating the whole thing.” 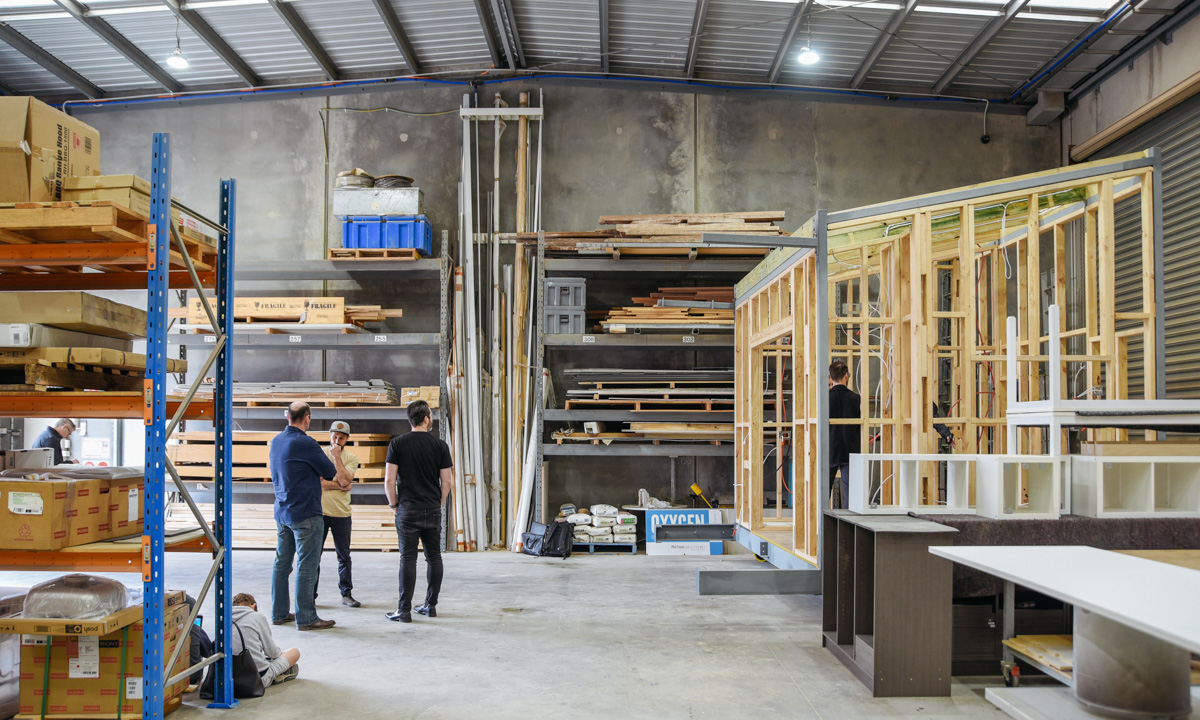 Even before the Calyx 16 prototype is complete, Forage Built has one pilot program in the works. A not-for-profit in the disability sector is looking at trialling a slightly tweaked design – two pods stitched together to allow more room, and the bed lowered for accessibility. But the crew hopes to bring together the first Forage Built homelessness project before the end of the year. If it works, they’ll share their experience with organisations seeking similar outcomes across the country and the world.

“It’s a legacy that we want other people to be able to grab and replicate,” Scott says.