Meet the caseworkers of the Hutt St Centre

CityMag spent a day at the Hutt St Centre, getting to know the dedicated people working tirelessly to better the lives of Adelaide's most vulnerable citizens. 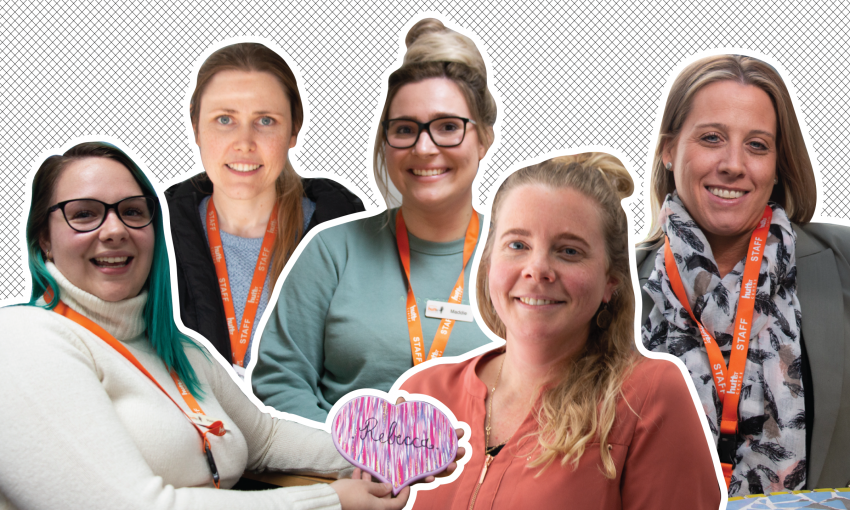 It was National Homelessness Week last week, and so CityMag stopped by the Hutt St Centre to get to know the team behind the CBD-based charity serving Adelaide’s community of rough sleepers.

Located in the southeastern corner of the city, the centre, now 66 years old, helps up to 200 people experiencing homelessness each day with legal, laundry and educational services. The organisation also serves 40,000 meals each year.

The Hutt Street Centre is not a shelter, but provides facilities and support to people in need.

Support comes in many forms, and is delivered for the most part by the 30-40 dedicated caseworkers, who help roughly 1,000 individuals each year find stable employment and accommodation.

We visit the centre on a sunny Tuesday afternoon. A volunteer gardener directs us to the door of a small building. We’re surprised that such a humble structure can make such an impact.

During our tour of the facility, CityMag is introduced to just a handful of caseworkers, occupational therapists and program managers, who each took the time to explain the part they play in the organisation.

I’m not somebody who says, ‘well, this is what I’ve achieved and you can achieve that too,’ because I think that everybody’s different. 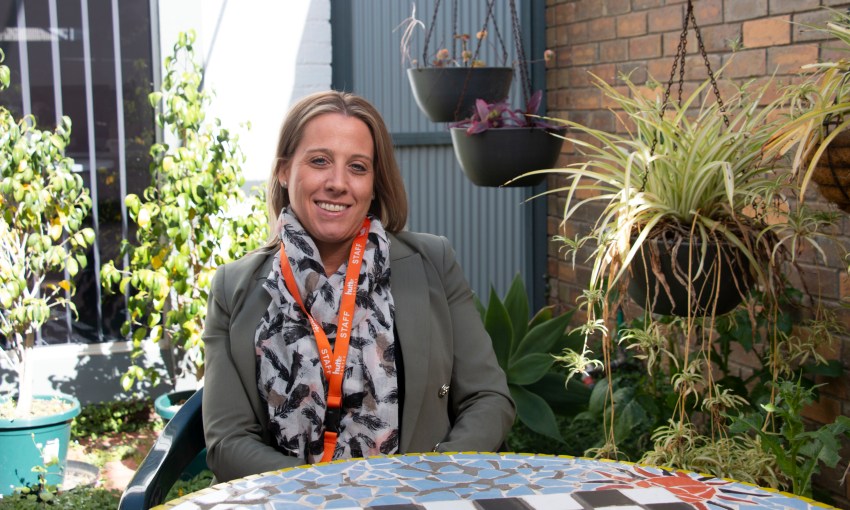 Victoria Haggerston manages the Hutt Street Centre’s Aspire program and has been in the role for three and a half months.

She tells CityMag she loves her job, and explains that the Aspire program works with participants over three years, with the aim to get them housed, engaged with the community, and on a pathway to education or employment.

Victoria shows up to work every day because she wants to make a difference, but admits one of the biggest challenges is grappling with social attitudes towards rough sleepers, and the lack of housing available in the city.

“You’re wishing that you could do more to be able to access quality housing for people,” she says.

“I want to make a difference.”

Veronica comes to her role from a unique perspective, in that she can identify with the plight of some participants in the program.

“I moved out of home when I was 14, and I’ve slept in my car before” she says, pushing her blonde hair behind her ears.

“I lived in not necessarily homeless situations but lived in share accommodation that was substandard.

“But I’m not somebody who says, ‘Well, this is what I’ve achieved and you can achieve that too,’ because I think that everybody’s different and everybody reacts differently to the circumstances that are thrown their way.

“I can more so educate other staff about participants, by explaining the pathways I had taken, so they could see the potential in others.” 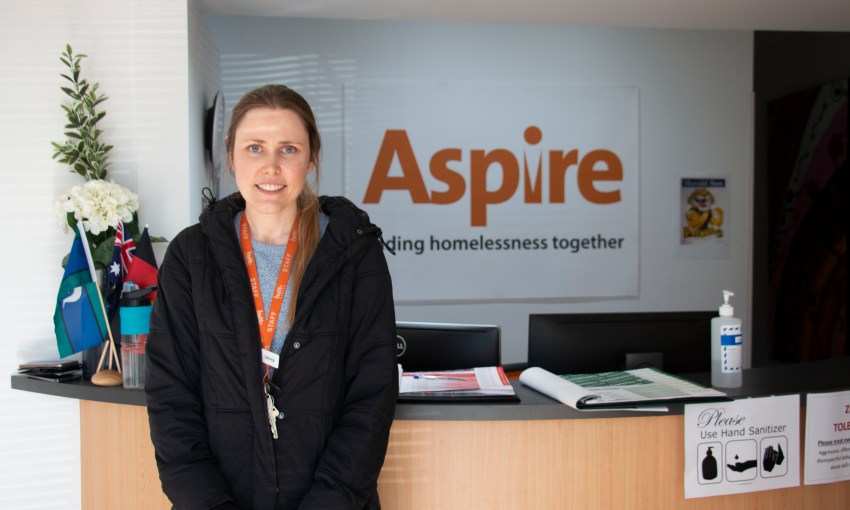 Gemma Shepard is an Aspire case navigator – a title that is the same as ‘case manager’, but is less paternalistic, she says – and has been with the Hutt St Centre for over a decade.

She looks after 26 clients, which she says should really be 20. Her caseload is so large because community service providers have not been able to provide enough adequate housing for participants.

This is the same frustration as we heard from Victoria.

Gemma talks quickly, but when we ask about the difficulties of her job, her pace slows. For all the positives that come from helping Adelaideans get back on their feet, there are also some horrible heartbreaks.

“There have been a few over the years, and it does hit you.

Gemma says she doesn’t think she could be a case navigator if she didn’t stay on top of her own mental health. She practices self-care and takes time off when required.

She also leans on supportive colleagues for help, like Veronica (below).

It is easy to assume that people are just lazy or they’ve burned their bridges, but it’s a lot deeper than that. 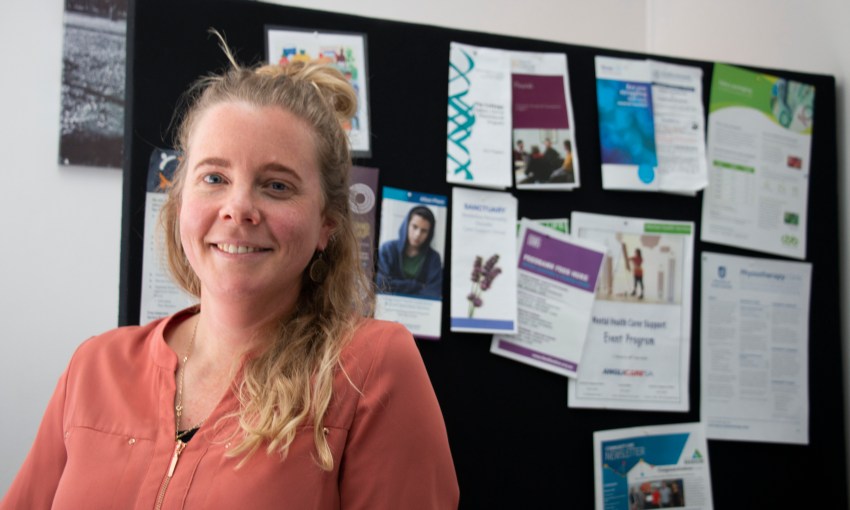 Veronica Owen is a relatively new employee to the Hutt Street Centre, and has been an Aspire case navigator for only eight months, but she’s been involved in charitable community work from a young age, she says.

As a kid, Veronica and her family helped local disability organisations, and as an adult, she spent six months volunteering in South America.

She wanted to live in South Australia but also be involved in social work, and so has found herself at the Hutt St Centre.

In her relatively short time with the Aspire program, Veronica has seen that homelessness can happen to anyone, and, frustratingly, there are certain barriers preventing people from getting off the street.

“There are homeless people my age, there’s people younger than me. People who have had families and jobs, and certain events have led them to where they are today,” she says.

“And usually, even if there are financial issues, there are barriers [for housing] like rental history, or people judging them by the way they look or the language they use.

“It is easy to assume that people are just lazy or they’ve burned their bridges, but it’s a lot deeper than that. And a lot of it leads back to childhood trauma, domestic violence, bad mental health.”

Veronica has also seen that just getting individuals into appropriate housing isn’t the end of a case. Sometimes people report feeling unworthy of shelter because there’s so little accommodation to go around.

Don’t judge, because I could give you many examples of people I’ve met that that would challenge any person’s idea of homelessness. 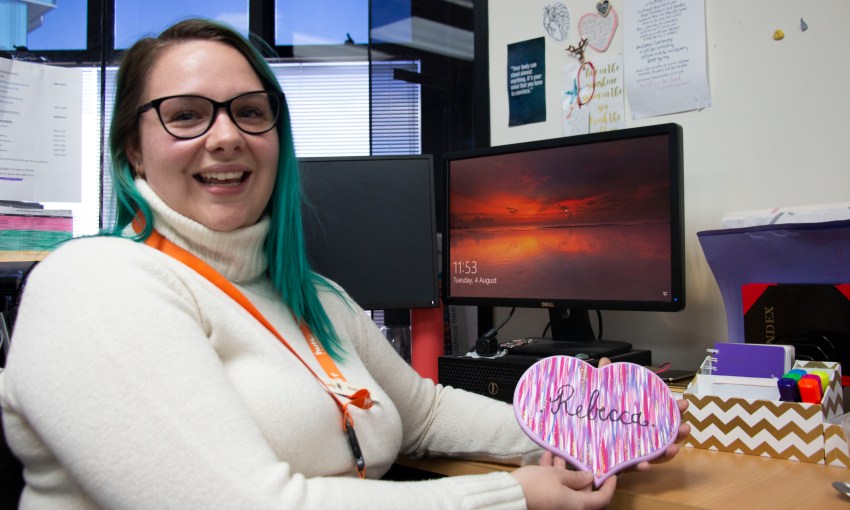 Rebecca Moller, aka Bec, sits behind a desk covered in cards and letters from grateful clients who have been housed.

Bec has been a Hutt Street Centre employee for three years, and is currently a case manager in the Eastern Adelaide Generic Homelessness department. Her job, she explains, is to help women, families, couples and singles achieve housing stability.

That, as well as being their “number one cheerleader,” she smiles.

“I also link them with appropriate services, such as drug and alcohol services, mental health, gambling domestic violence services.”

Bec would like to see more communication between health departments in the homelessness sector. If individual services were less siloed, there would be more opportunity to provide better outcomes for her clients.

She gives the example of someone who has mental health and substance abuse issues. If they haven’t been given a diagnosis and are not medicated, they may not know how to deal with what they’re experiencing. They may turn to drugs or alcohol to cope.

“I have a client who hears voices and the things they’ve told me they hear is horrendous,” Bec says.

“But because they use substances, I’m unable to connect them with mental health supports. This is because they’re using and have to remain sober [for the program].”

It’s difficult seeing clients go backwards, she says, whether that’s due to partners re-entering their lives, or changes in their mental health condition.

Bec says she feels honoured that her clients let her in to their lives. It’s the reason she comes to work every day, even when the job is at its most difficult.

“I hope this reduces the stigma of homelessness. If you don’t understand, ask questions. Don’t judge because I could give you many examples of people I’ve met that that would challenge any person’s idea of homelessness.”

What you or I see as a good life, so a standard for keeping your house a certain way or material possessions, may not be necessarily a priority for some of the people that we work with. 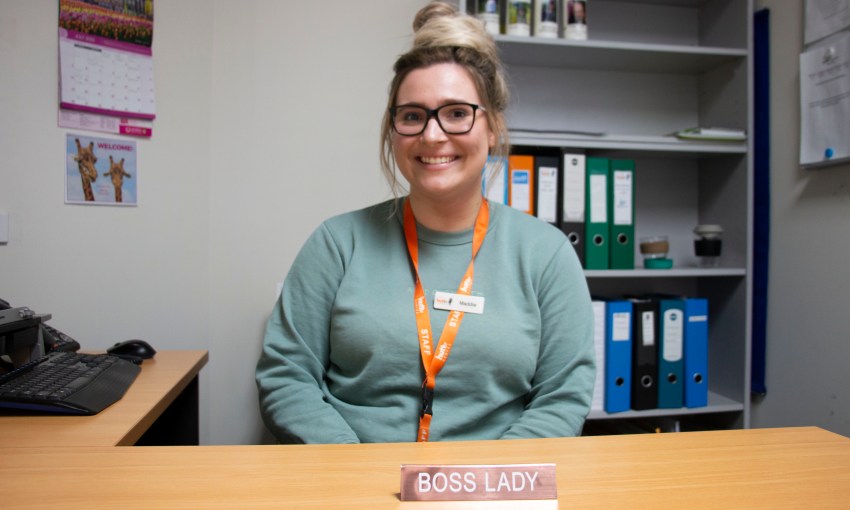 Maddie has been with the Hutt Street Centre for roughly a year, and her role as a “jack of all trades” is to try and help older individuals be as independent as possible for as long as possible.

Most of Maddie’s clients are in stable accommodation, either through boarding houses or community or public housing, and Maddie offers advice on how to improve the home – like inserting a ramp or rail – and improve how people perform tasks, such as cooking and cleaning.

Although Maddie’s job is people-centric, a big hurdle is building relationships, she says.

“The most challenging part is sometimes building that rapport, and people opening up to you with stories, or often histories of trauma and abuse,” Maddie says.

“Sometimes that comes with its barriers and people potentially not trusting a service, and not wanting to work with people because of what’s happened.”

Maddie is grateful for the relationships she’s built at the Hutt St Centre, and says this job has taught her that the definition of a ‘good life’ differs greatly from person to person.

“What you or I see as a good life, so a standard for keeping your house a certain way or material possessions, may not be necessarily a priority for some of the people that we work with,” she says.

“If you were to ask other people, what does a good life mean to you, it’s different.”

If this story raised issues for you, call LifeLine on 13 11 14. Beyond Blue and headspace are other national organisations offering comprehensive mental health support.

Find out how you can support the work of the Hutt St Centre by visiting their website.