Before heading to their Proof rooftop party this Sunday, CityMag spent some time getting to know vino vanguard, Michael Corbett.

A Rooftop Party presented by Vanguardist Wines runs this Sunday, 20 November from 12:45pm until 9pm, check the Facebook event for updates.

As his work ethic (and the label’s title) suggests, Vanguardist is about more than just good wine.

“Vanguardist, being avant-garde, [means] there’s pressure to try and actually have a point of difference, it’s not just a name,” Michael laughs.

“Our philosophy is to try and push boundaries in different ways, and to try and create products that actually are breaking some rules.”

One area of focus for Vanguardist’s innovative attitude is the ethics involved on the production side of the wine industry.

“I’m passionate about biodynamics and organics and minimal intervention, so pretty much all of our wines are unrefined and unfiltered, and there is a real natural approach,” Michael says.

The Clare Valley-based winery is not yet at the stage of producing its own fruit, but Michael has been using this opportunity to influence the growers he’s working with.

“Basically I work with three growers, and it’s quite a slow process to convert them,” Michael says.

“They may or may not have had anything to do with organics or biodynamics in the past, so it’s a conversion process, and it’s going to be a subtle one.

“With me actually going out and working with people, and trying to at least get the conversation started… it might take 10 years, but it has that impact potential that’s bigger than just me.”

From the consumer’s perspective, the Vanguardist approach to flavour was also unconventional. 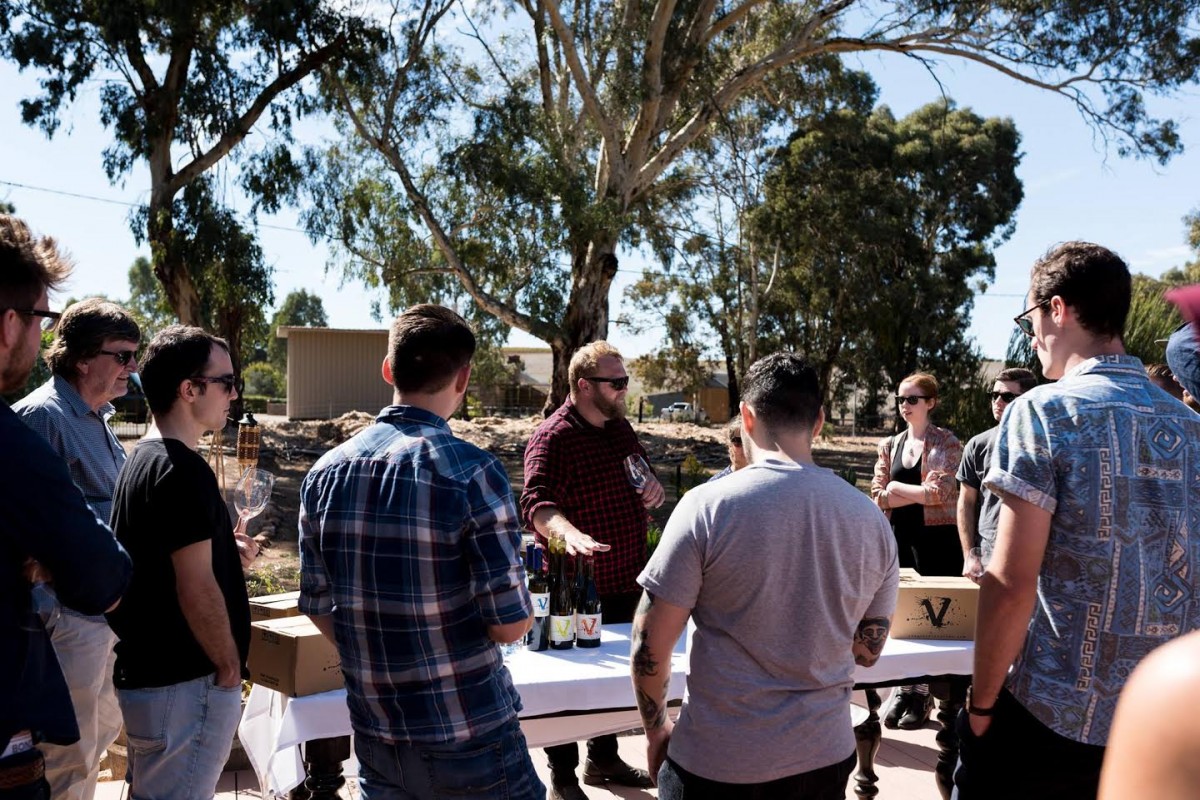 “We really reverse engineered what style of wine we were going to make,” Michael says.

“Before we picked a grape, that was our MO.”

It’s no surprise then that Michael is well on his way to achieving that goal.

“I would’ve thought that a five-year goal would’ve been to get our wines to Attica in Melbourne,” Michael says.

“We’ve actually got three wines there now after only three years in the game, so I was really flabbergasted, to be honest. Like, fucking hell, the best restaurant in the Southern Hemisphere is going to have our wines on their list? That’s incredible.

“That was my dream to do it. So it’s given me more belief and more confidence in what we’re doing.”

Not one to rest on his laurels, Michael is bringing Vanguardist to Adelaide for a rooftop party at Proof later this month.

“This is the second event after doing a pretty successful dinner at Ballaboosta with… The Fruitful Pursuit, and it’s about showcasing… and trying to align ourselves with the really cool things in Adelaide and the city,” Michael says.

“I know that Proof doesn’t have its own strongly attached restaurant, so to be able to say to them ‘I want to bring in somebody else who’s doing some really cool things’ [is great], and Billy [Dohnt] is certainly doing that.

“I’ve chatted with him a few times… about the wines and how I’m trying to add texture into the wines, and a power of flavour, and how that might match different styles of food – so the spices, the textures, the flavours.

“We really are focussing on that.”