From an iOS video game arcade, a short film speculating a grisly future, and a great place to take a nap, here are three ways to see MOD.'s latest exhibition, Waging Peace.

According to Kristin Alford, director of MOD., peace has a branding problem.

A graphic plastered on the wall of the museum states that while 9-out-of-10 people consider peace to be “VERY IMPORTANT,” only 1-in-10 people are actively engaged in peacemaking.

Read our chat with MOD.’s director, Dr Kristin Alford about the Waging Peace exhibition at the link.

And compared with the myriad layers of imagery conjured by the concept of war and conflict, the visual identity of peace is, for 29 per cent of South Australians, left up to the age-old symbolism of doves and nuclear disarmament.

For its most recent exhibition, Waging Peace, MOD. is exploring the ways in which society can realign its thinking; instead of working toward war, practicing peace – a big ask in a state with such an economic imperative on the perpetual probability of foreign conflict.

From an iOS game arcade, a dystopian future caught on film, and a great place to take a nap, below are three Waging Peace exhibits designed with peace as their primary outcome. 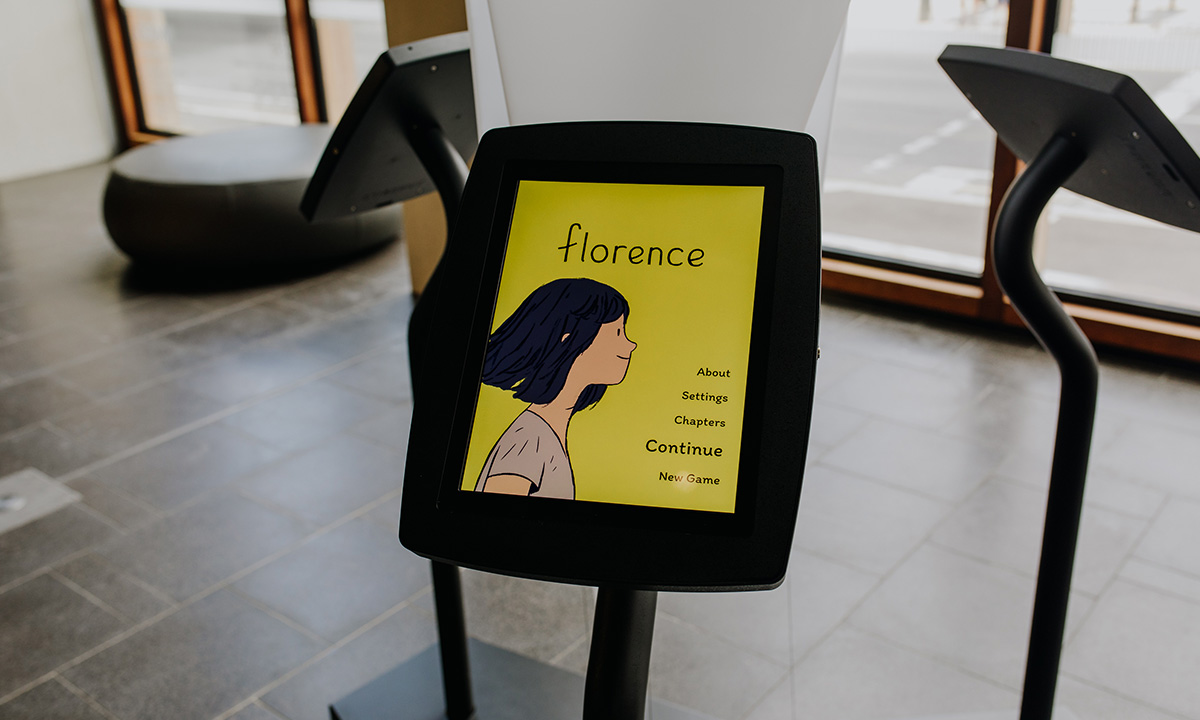 Many a hand has wrung at the apparent negative effects of video games on our global youth.

Within hours of the Virginia Tech shooting in the US in 2007, news outlets began speculating about the role video games played in preparing the shooter, setting off a tide of moral panic that has yet to abate – despite a mountain of disproving research.

Telling, though, in that response is the attitude to ban, limit, and constrict games and gamers, rather than trying to refocus gaming culture away from violence.

To a degree, this has occurred organically in a subculture of ‘pacifist gaming’ that sees players complete otherwise violent games without firing a bullet or throwing a punch.

Developers, too, have for years been designing and releasing games that don’t revolve around muscle-bound marines stomping through aggressive battlefields, and MOD. has curated an arcade of nine of the best among them. 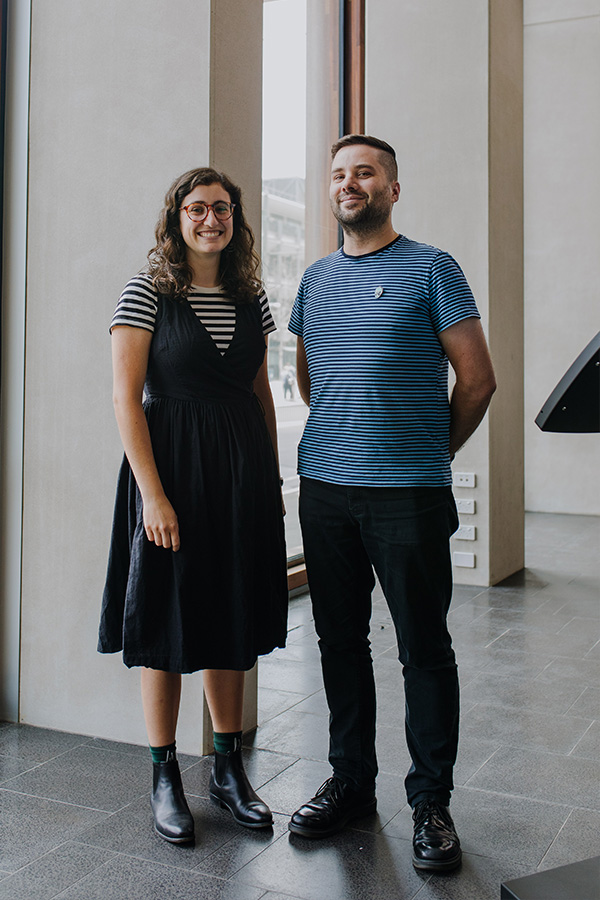 Florence is a beautifully illustrated narrative puzzle-solving game that follows the story of a 25-year-old woman named Florence Yeoh, who, lured by the sound of a cello on her morning commute, breaks from her monotonous routine and falls for Krish, the affable cellist whose music literally sweeps her off her feet. Tracking the highs and lows of Florence’s life and relationship is as whimsical and delightful as it sounds.

Papers, Please places you in the immigration office of the fictional country of Arstotzka. Your job is to approve or deny entry to immigrants as they approach your desk. Each person processed is money in your bank, which you need to feed your family, but allowing unsavoury characters into the country or denying legitimate people will incur a fine. Making the process more difficult are the moral choices presented of denying someone fleeing human trafficking who doesn’t have the proper paperwork, or approving them and copping the fine.

And Bad News Game, puts players in the role of a fake news producer. The game is in wider release but MOD. went the extra step to commission a shorter, Australian version of the game as an introduction. The game aims to “arm Australians against fake news” and test information literacy in the age of misinformation.

If analogue is more your style, MOD. has also found board games not centred around conflict – like the beautiful Paco Sako, a reimagined chess in which the pieces, rather than knocking each other out, join together and take on both piece’s board mobility, and the ultimate objective is to dance – not kill – your opponent’s king. And MOD. has also produced Peace Out, created in collaboration with school students from Trinity College, set for release in mid-January.

Another MOD. commission, Trigger Warning is a seven-and-a-half minute film produced by design firm Superflux, exploring the potential future of global civilisation from the standpoint of current day online international and interpersonal relations.

It is not too far a stretch to say we’re in the early stages of World War III, the film suggests, as attacks on democracy and global governance are made with zeroes and ones, resulting in gruesome irl violence.

“It’s like sticking your head in the worst bucket of the internet for seven-and-a-half minutes,” Kristin says.

“Trigger Warning for me is really important… bringing something in that jolts us out of our familiarity is really good. I just think it sets the scene for why we’re bothering to have the conversation in the first place.”

In order to avoid catastrophe and move toward peace, reflecting on the path already laid behind us is a valuable enterprise. Enter The Arcade, greet the creepy Pepe mannequin, take a seat and prepare to be unsettled. 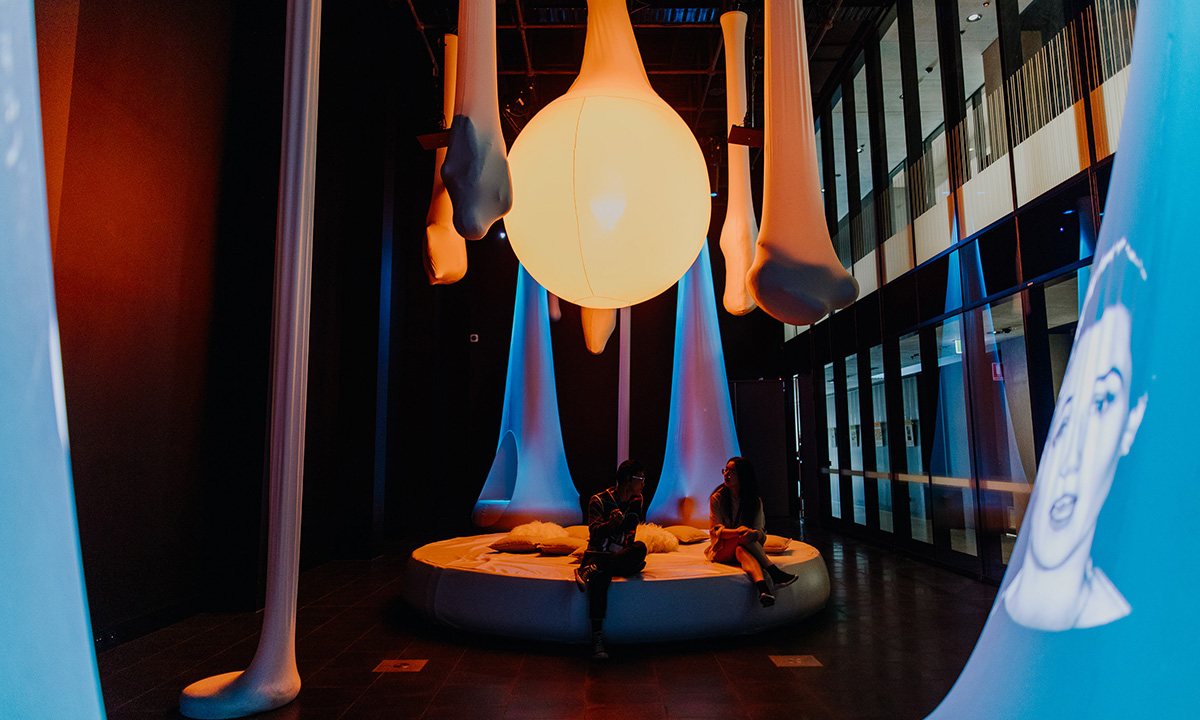 Aside from the cocooned adult human-like shapes hanging from the ceiling in alien sacks, Sleep Ops offers a calming counter-balance to Trigger Warning.

With a soundscape by Adelaide songwriter Jason Sweeney, run in an eight-minute cycle and designed to decrease brain activity, the space offers visitors cosy pods to sit down in and hear about the science of sleep and the consequences of not getting enough, as told by a sleep researcher and military and hospital emergency personnel.

UniSA researcher, Siobhan Banks, whose face will appear on the side of the pod as you sit down, explains her work “thinking about how you help people in submarines or working in remote, harsh environments when they’re peace keeping or in the middle of a conflict and how you actually help them get enough sleep so they can make good decisions,” Kristin says.

“I’m also just really taken with the idea of sleeping for peace. There’s something so curious about that.”

According to reports from Kristin, it’s an idea that’s quickly catching on amongst Sleep Ops attendees, some of whom have been caught mid-kip in the exhibit.