From mushrooms shooting through the soil to healthy tussocks swaying in the wind, academics and volunteers are noticing change in Tuthangga Park following the cultural burn in May. City of Adelaide officials say the pilot will be repeated in the city's green belt.

The last time CityMag attended Tuthangga Park (Kaurna for ‘grass place’), it was literally on fire.

In May, we spent an evening sleeping in the bushland area in the southern section of the Adelaide Park Lands. We were there to collect the thoughts of Kaurna elders and young men 12 hours before a moment of cultural and ecological reckoning: the cultural burn known as Kaurna Kardla Parranthi.

Kaurna is the Native Title landholder of metropolitan Adelaide and the Hills, boasting 50,000 years of connection with the land. With guidance from fire-stick farming expert and Tagalaka man Victor Steffensen, approvals from the City of Adelaide and funding from Green Adelaide, a group of Kaurna elders, and young men and women, carefully set the park ablaze. 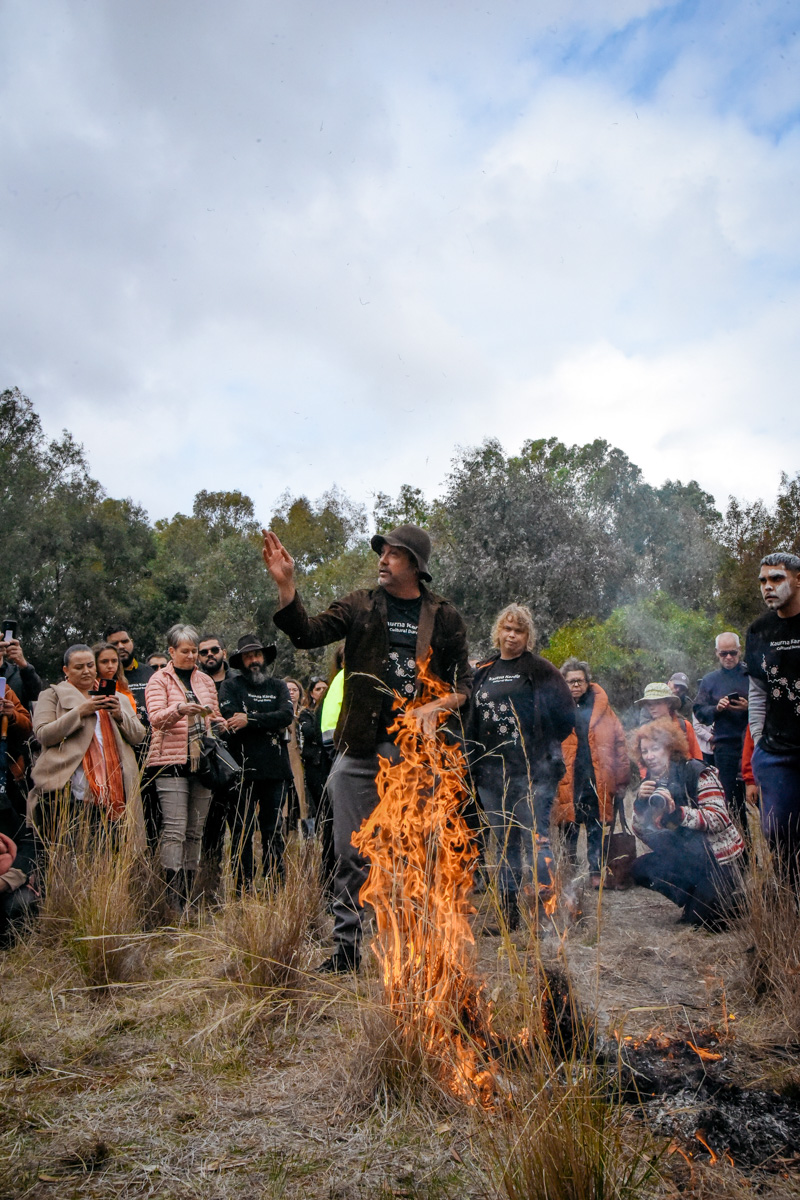 The cultural burn was the first to happen in the Adelaide CBD since colonisation, with an aim of reigniting Aboriginal Australian land management practices in the park lands for social and environmental gain.

In November, half a year later, the site looks starkly different. Dead tree leaves don’t crunch underfoot, and there’s barely any natural flotsam to manoeuvre through.

Instead, we see small bunches of green grasses and thigh-high native ribbons blowing in the breeze.

“Someone in our biodiversity team also noticed a species of a fungus mushroom that shot up after the fire,” City of Adelaide senior biodiversity sustainability advisor Chris Butcher says. “That’s one thing that is known to be triggered by fire.

“With the fire returning to Country, we’re reintroducing that thing which might see more species that have laid dormant in the seed bank for a long time be able to go ‘Oh – it’s time to go now’.”

Chris is one of many experts who have monitored the site since the cultural burn. He’s regularly joined by Kaurna men and women, Bush for Life volunteers and University of Adelaide students to observe the land’s environmental changes.

At this point, it’s still “too early” to declare any concrete findings, Chris says.

Grasslands are regularly changing systems, he explains, impacted by weather, seasonal cues and grazing impacts. It’s hard to tell at this stage what can be attributed to the fire and what has happened due to weather conditions.

Anecdotally though, he’s noticed a significant reduction of on-ground thatch.

“Initially, even days after the burn, we came to have a look at the site and the tussocks of the native grasses,” Chris continues. “We’re already sending out new green shoots.

“The tussocks (small bushes) have responded really well, and another thing that we saw a lot of is a lot of the native sorrel or oxalis perennans, and that is a great species.

“I thought the fire was going to clear up the space and it was going to be flushed with weeds. But fortunately, it doesn’t seem to happen that way. It looks really good.” 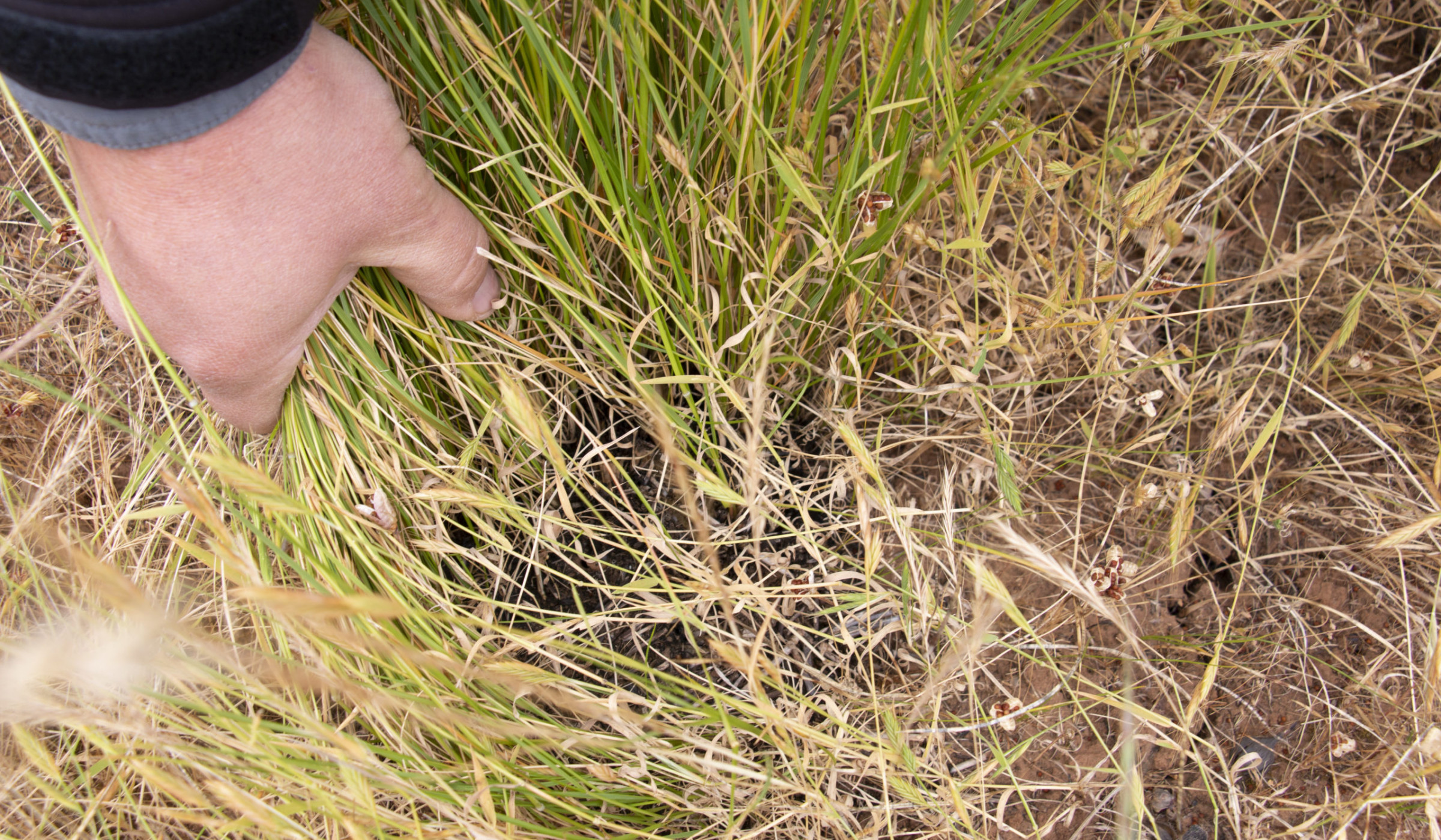 This grass was burned in May, identifiable by the black soot underneath. Seeds have collected at the top, ready to fly away and germinate the soil.

Native sorrel can be identified by its small yellow flowers. It’s an ideal food source for a “little hero” in the Adelaide Park Lands, the Chequered Copper butterfly, Chris says.

This butterfly has traditionally only been found in the green belt’s Pakapakanthi Victoria Park, but since the fire it has been spotted in this new habitat.

“We’ve been managing that site and the butterflies have come back after not being on-site for 50 years,” says City of Adelaide sustainability manager Maria Zotti.

“Now we’re starting to see them here, which is really exciting.” 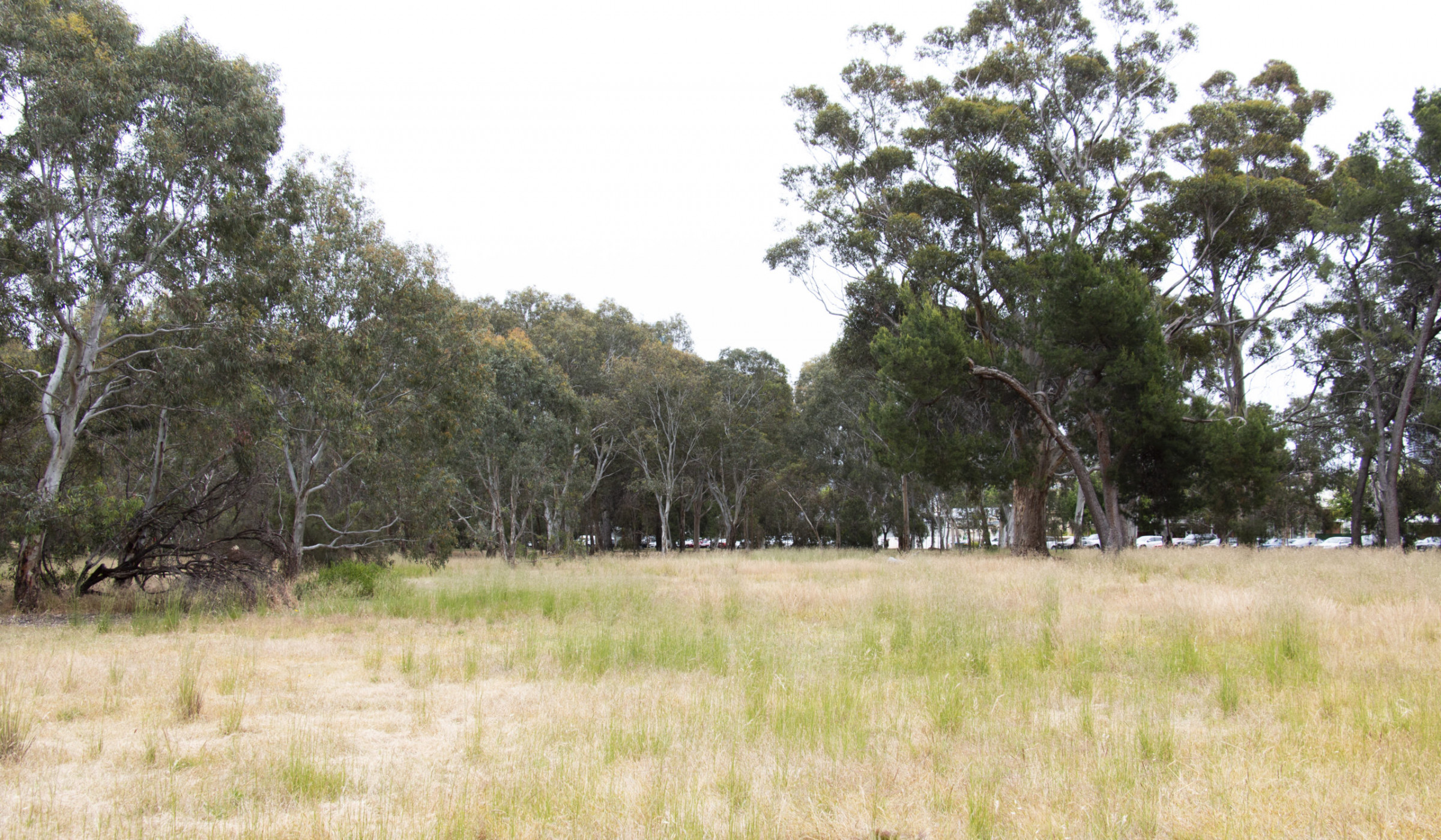 Randy Bates is the group activities and regional coordinator for the not-for-profit organisation Bush for Life. The group has a particular focus on Adelaide Park Lands areas rich with vegetation.

He coordinates 10 volunteers who visit the city’s green belt weekly and perform tasks like ripping out harmful weeds.

With an obvious penchant for native flora, Randy describes the native grasses in the area as “beautiful”.

“You’ve got about 12 different species of native grass out here,” he tells CityMag with great enthusiasm. “They got wallaby grasses, spear grasses, bunch wire grasses, windmill grasses, which is a common name.

“Some of the areas where the burn happens, there’s less weedy grasses.”

Randy believes the area has thrived since May, as the burn cleared dead thatch while activating sleeping native grass seeds. This has only been spurred along by winter’s wet weather.

He’s also confident the land management method – when led expertly by Native Title landholders – is the way of the future.

Bush for Life has been waiting for an organisation to attempt an alternative regenerative method of prescribed burning for asset protection, as “it’s about the whole system,” Randy says.

“I had full faith in what Kaurna and what Victor had said would happen.”

While people monitoring at ground level are confident in the effects of the cultural burn on Tuthangga Park, the site is also being monitored from above.

Ramesh Raja Segaran is director of the University of Adelaide’s Unmanned Research Aircraft Facility. In short, he has a thing for drones.

Upon hearing about Kaurna Kardla Parranthi, Ramesh sent a team of students to the site to capture images with software-controlled flying robots. These images are the baseline for what the site looked like pre-fire, with the volunteers also capturing snapshots at this six-month juncture.

Although, again, it’s too early for them to announce any concrete findings, they have noticed abundant green growth and a healthy distribution of tussock grasses.

“Everything looks fantastic,” Ramesh tells CityMag, but the group will continue to capture images and chart the progress.

“In summer, you expect a bunch of drying off and soil exposure. It’s about understanding how much more or less [that],” he explains.

“But the idea is that we are pretty excited about being able to take snapshots of how the vegetation looks across time, and be able to look at things that are interesting as a response to those fires, and be able to go back in time to see or ask questions that we didn’t even know that we wanted to ask.”

Ramesh says the university will publish the findings if anything notable comes up. The point of their presence is to contribute to “the story” that comes from the burn itself, he says.

“It’s a beautiful idea to be able to bring cultural burning back into the city where it hasn’t been for a couple of 100 years, [and] if we can contribute towards that story, that’d be fantastic,” he says. “And if we can learn anything from it as well, that would be amazing.”

Chris and Maria say the Adelaide City Council is currently in conversation with Kaurna Yerta Aboriginal Corporation about other Adelaide Park Lands cultural burns in key biodiversity precincts. This pilot program was only the beginning.

CityMag contacted Kaurna Yerta Aboriginal Corporation representatives for comment but we did not receive a response before deadline.