What to drink this long weekend at Sparkke at the Whitmore

From Sparkke's Blackbird IPA to an all-South Australian Negroni, Sparkke at the Whitmore’s bar manager, Emilee Moore, walks us through what’s on offer for the pub’s official launch this March long weekend.

It’s been six long months since we first heard word of Sparkke Change Beverage Company’s intentions with the Whitmore, a 180-year-old pub in the CBD’s southwest.

Those paying close attention may have noticed the doors quietly open in the past week, but the pub will officially be launched as Sparkke at the Whitmore this weekend, and it is far removed from its prior life.

Sparkke at Whitmore launches this Friday, 8 March. Keep up to date with special release brews and events via their social media.

Much of the original stonework remains – including an external wall within the building that harks back to its prior life as the Queens Arms, licensed to Thomas Maslin in 1838 – but has been accented by fresh timber, black steel, and a pastel pink strewn throughout (including the bar top).

All pokies have been removed from the venue and an 800-litre, two-vessel nano-brewery has been installed, from which Agi will brew 1000 kegs per year, including two specialty brews a month.

“It will be tapped fresh for people to enjoy with a friend at the bar or take home in a growler from our on-site bottle shop,” Agi says.

Great beer is obviously a given at Sparkke at the Whitmore, so ahead of its official opening, CityMag caught up with the pub’s bar manager and 2IC, Emilee Moore, for a tour of what else is on offer from the venue’s beer, wine, spirits and cocktail lists. 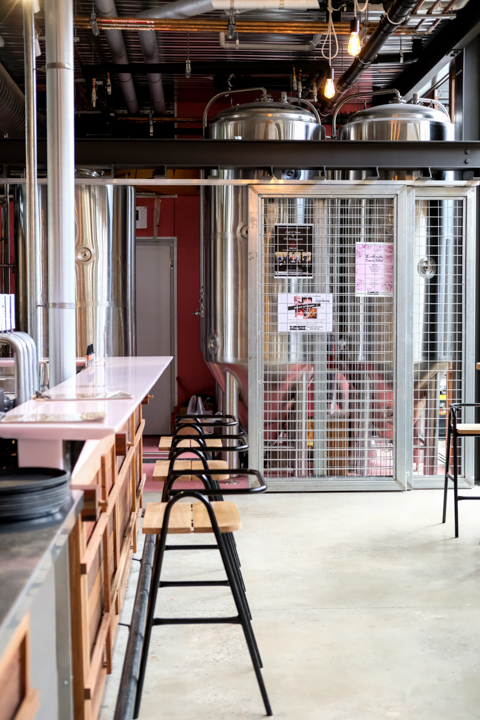 Emilee grew up in a pub just up the road from the Whitmore; she was the fifth generation to run the Brecknock on King William Street, up until her parents sold it in 2009.

She was invited to run Sparkke at the Whitmore’s bar by the pub’s general manager, Ali James, and was immediately drawn to the group for its passionate advocacy and welcoming attitude.

“It’s not your typical pub pub. It’s different and it’s got its different qualities about it,” Emilee says.

“Everyone’s just so nice, so friendly. It’s a real family environment, and everyone’s really understanding, accepting… It’s just a pub where they want everyone to come in and feel welcome, which is great.”

The thread of Sparkke’s ethos runs right through their new home, with local, craft, small business, and female-owned and operated offerings being a heavy feature across the back bar and beer taps. 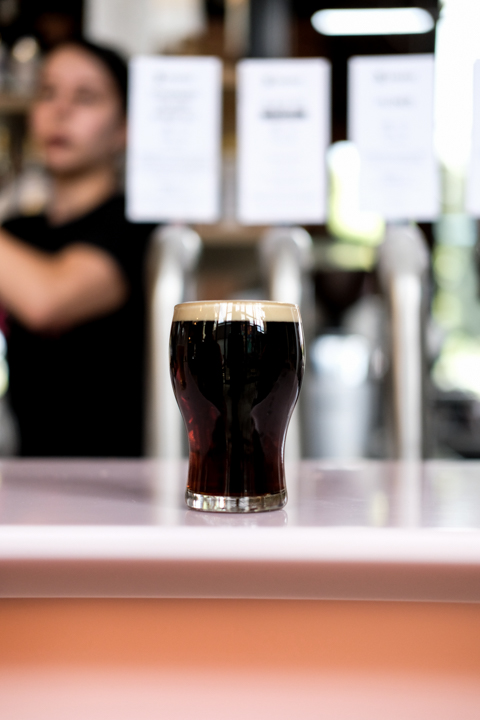 Every one of Sparkke’s cans are available from the pub, and the majority of the bar’s taps are house brews – some of which will be one-offs and seasonal styles.

There is also a strong selection of craft brews from around the country, including local representation from Barossa Valley Brewing and Mismatch. From further afield, Young Henry’s (where Agi worked prior to founding Sparkke) cloudy apple cider is tapped while Agi produces another batch of Sparkke’s own Consent Can’t Come After you Do apple cider.

From the can list, there is representation from Nomad Brewing (NSW), Yeastie Boys (NZ), Zeffer Brewing Company (NZ), and Sierra Nevada (US).

“That will be an evolving list, so that’ll change constantly,” Emilee says.

As mentioned above, growlers will also be available from the bottle shop, when it opens next week.

And if you’re new to Sparkke’s brews, grab a Brew Tasting Board of four 180ml glasses of the brewpub’s own beers for $15.

Emilee’s pick is for the Blackbird IPA, a surprisingly light 6.1-per-center.

“It’s a lovely, dark beer, but it’s very deceiving. It doesn’t drink heavy. It’s got beautiful dark coffee, a bit of mandarin flavour to it,” she says. 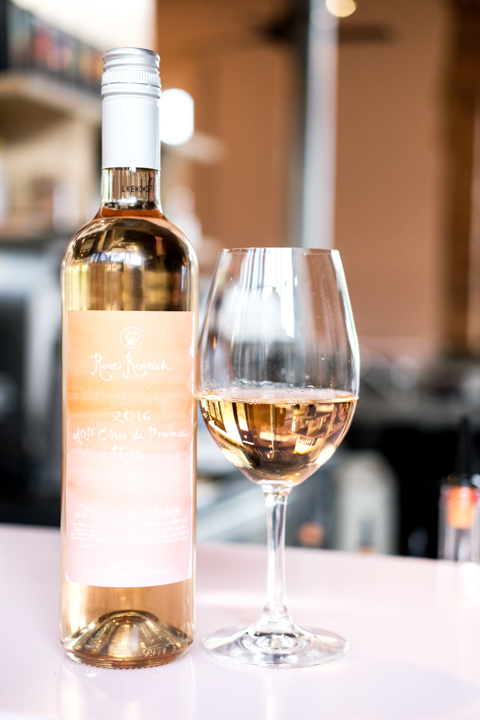 Sparkke at the Whitmore’s wine list is concise and “delicate,” Emilee says, and has “a lot of female winemakers and small businesses.”

The bottle shop will have a much more extended range, around 120 bottles, each available to take home or consume on premise, with a corkage fee.

Emily reports that Sparkke’s own Say I Do sparkling wine has been a quick seller, as has Sparkke co-founder and director Rose Kentish’s rosé, available by the bottle and by the glass. 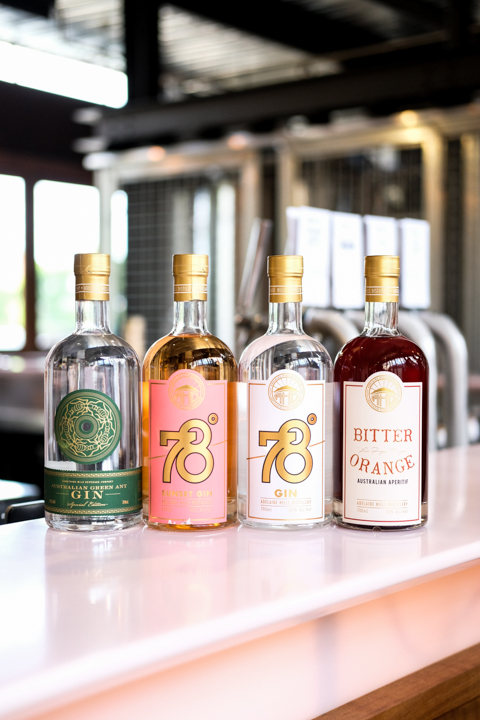 Sparkke at the Whitmore proudly exhibits the company’s great affinity for local produce.

The list of spirit distillers, again, focusses on small and local businesses, and female-distilled options.

“We do have some quirky whiskies as well, which we sell the occasional nip of, and we’re trying to get some more female whisky distillers on the shelves.” 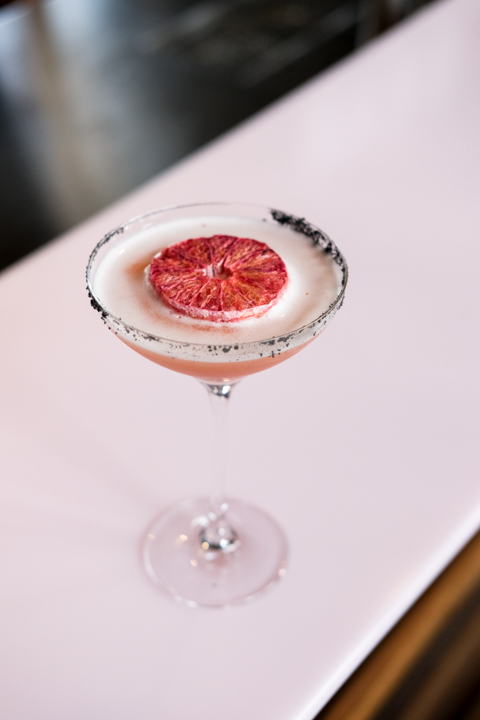 Blood Orange Margarita, with charcoal salt on the rim.

Working with bar supervisor and senior mixologist, Tim Dawes, Emilee has facilitated a cocktail list that features all the classics, as well as eight specialty cocktails.

Each of the specialty cocktails has been designed to incorporate a Sparkke product, some are expected, like the Nipple Are Nipples hard lemonade in the Lemon Lime Bitters, and a Dark & Stormy featuring Boundless Plains to Share alcoholic ginger beer.

However, some make novel use of the brewery’s resources.

“We do an old-fashioned, we don’t have any Sparkke-made products in it, but we muddle in hops from the brewery and put hop flowers on top of it, so it’s got a bit of a brew taste to it. It’s beautiful,” Emilee says.

Sparkke at the Whitmore officially launches on International Women’s Day this Friday, 8 March. The pub is open for lunch from 12-3pm Monday to Saturday and Sunday all day, and dinner service is from 6-9pm Monday to Friday, 5-9pm Saturday, and 12-8pm Sunday.