This was a useful disposition coming up in New Zealand’s hospitality scene – a gruelling industry that asks a lot of its workers.

“New Zealand culture in hospo is, if you’re not working, it’s all about work, work, work,” he says.

“No one will force you to work more than 40 hours, but because you love your job so much, you end up doing 65, 70 hours anyway, because it’s just the culture over there.”

Krish worked in SkyCity restaurants for more than six years, and was often part of a team that would open new projects within the organisation.

Among these was MASU, a Japanese restaurant in Auckland, founded by celebrity chef Nic Watt, who, in 2015, lunched Adelaide restaurant Madame Hanoi.

Having worked with Nic on the opening of MASU, Krish was flown to Adelaide to help open Madame Hanoi. He immediately fell in love with South Australia.

“Fell in love with Glenelg first, and then went for a drive to Clare Valley, fell in love over there… Went to Barossa Valley and, like, wow,” he says.

But Australian working culture also made an impact.

Madame Hanoi’s opening was a two-month job, and there were some weeks where the team would work “90 hours, 100 hours”, but there was an attitude of care shared amongst his colleagues.

“We were kind of kicked out of the kitchen: ‘No, no, you’re not supposed to do that,’ our bosses would say. ‘It’s not allowed,’” he says.

“It was really something different for us. Like, ‘Oh shit, ok, someone actually looks after you here.’”

As Madame Hanoi’s opening approached, the restaurant had not installed a head chef. Krish put his hand up for the job and asked SkyCity to find his wife, Tara Ravarua, also a chef, a position in Adelaide.

For the next few years, the two worked a dozen or so metres apart, Krish at Madame Hanoi and Tara at Sean’s Kitchen.

“It got to the point where there was just too much pressure on your brain.”

In 2016, a new challenge presented itself.

One of Krish’s former bosses, the first person to give him a job out of cooking school, was now working as the kitchen manager for the royal palace in Jordan. He offered Krish a position in the kitchen team.

Krish was called over for a trial, which occurred over the course of 10 days. Four days were dedicated to prep, and then he was asked to prepare a meal for King Abdullah II.

“I did the whole Madame Hanoi menu, because that was what I was cooking at the time, so I did a sharing, family-style experience, Asian cuisine with a French twist,” he says.

The King was impressed, and then asked the rest of his family to join him for a second trial of Krish’s food. The Queen then asked Krish to do the same menu again for her family.

“They asked the kitchen manager: ‘I know it’s a hard push, but is it possible he can do the same menu again tomorrow?’ Third day in a row,” Krish laughs

“And then the Prince came out and tried it, and he wanted to have the same menu for his friends the next day.”

Krish got the job, but turned it down because, at that time, there was no position available at the palace for Tara.

Ten months later, Krish got another call from his old boss promising both he and Tara would be looked after, and the duo took the opportunity. They spent the next couple of years living and working at the Jordanian palace, occasionally travelling alongside the monarchs.

It was an exciting life, but one that began to feel too much like Krish’s experience working in New Zealand.

“We were taking a [holiday in Thailand]… and it took us about two weeks just to switch off,” Krish says.

“I used to still wake up in the middle of the night: ‘I forgot something!’ It got to the point where there was just too much pressure on your brain.

“The work/life balance that we enjoyed in Adelaide was not there anymore. It was being switched on all the time. Sometimes it would be like, ‘Alright, pack up your things, we’re going somewhere now.’

“It used to be very hectic, but I loved every moment of it.”

The couple resigned in November 2019 with a plan of spending the summer in Adelaide and then embarking on trip around Australia “for [however many] months it takes us,” before then settling in Adelaide.

These plans were scuttled as Australia’s interstate borders closed due to the coronavirus pandemic.

Krish’s next challenge was finding work.

He met Hugo Pedler, owner of West Oak Hotel, who had recently bought into Joe’s Kiosk at Henley Beach and was looking for a chef to bring the beachside institution into the modern era.

Opening new restaurants is Krish’s specialty, so it was a simple job. The new Joe’s debuted in June this year.

Throughout this process, Krish and Hugo discussed how the West Oak could come back from the pandemic in a strong position.

“He kept on telling me some of the little problems he was facing, and that he wanted to overcome, and I kept on giving him little suggestions,” he says.

“And then one day, out of the blue… he was like, ‘How much are you going to charge for consulting?’”

This was the beginning of a new direction for the West Oak Hotel.

Hugo had plans for shifting the pub away from being a beer-centric venue with good food to a food-centric venue that’s also a great place to have a beer.

This was an entirely new challenge for Krish. He had never worked in a pub. Nor had he ever eaten the Australian pub classic: the parmi.

But his international cheffing experience gave him a unique perspective from which to reimagine what pub food could be. 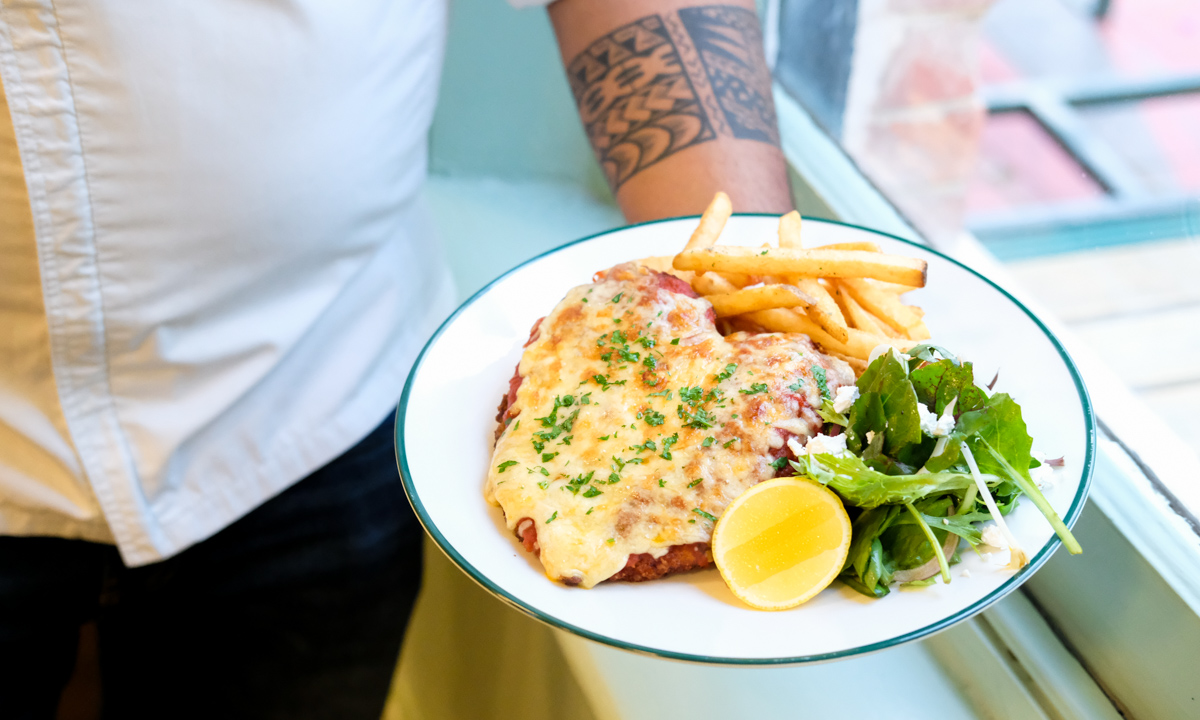 Hugo stipulated some items on the West Oak menu must remain, but he gave Krish freedom to reinterpret them however he chose.

“Japanese do really good katsu, so fried chicken,  fried pork they do as well, which is just panko crumbs fried in nice, hot, clean tempura oil, pretty much. So it was pretty much that, in my head,” he says.

“So we blitz the Doritos up, and the normal corn chips, and mix it with panko.

“We’ve got tempura flour, which… crisps up the chicken and holds all the flavour inside the chicken, so when you bite into the chicken, it’s really crispy on the outside but the chicken stays nice and moist.”

The menu’s nachos dish is made with slow-cooked beef chilli – a favourite recipe of King Abdullah II, with a slightly tempered spice level for the Australian palate.

The trio of olives, a simple dish, harks back to an experience Krish had while staying at an Airbnb in Sicily. They’re washed of their brine, soaked in olive oil, then fried with chilli, garlic and citrus. 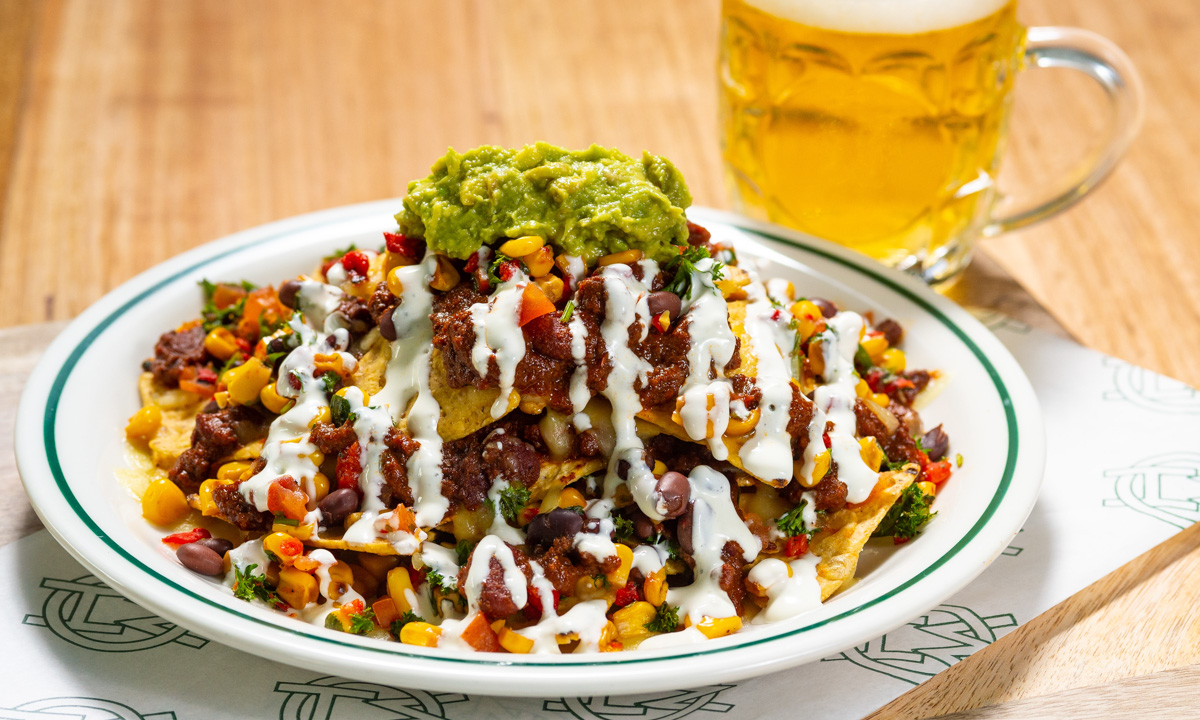 Nachos sanctioned by royalty (kind of). This image: John Krüger

In its reinvention, the West Oak has been careful not to alienate its established customer base. There are plenty of main dishes around the $20 mark, but Krish has also introduced options in the higher echelon, like the $40 steak.

Most importantly to Krish, the meals are executed to his standards.

“I’m doing good, restaurant-quality food in a pub,” he says.

“It’s not like the other pubs where it’s just, chuck it in the deep fryer [and] within seven minutes your food is at the table.

“You’ll sit down, you’ll have your beer, while you enjoy your beer your food will be cooked fresh to order, nothing is pre-cooked, and then it’ll come out really nice and hot.”

The city, and in particular our hospitality scene, is re-emerging from the coronavirus shutdown in a new form.

We are forced by legislation to sit while we eat and drink, and this has changed the experience of dining out. Booking ahead is now almost requisite to eating out at all, lest you risk being bounced from restaurant to restaurant in search of a table.

City diners are ready for a new perspective, and the West Oak is ready to provide one for us.

The West Oak Hotel is open Monday through Saturday, with the kitchen operational from 5pm ‘til 9pm every trading day, as well as 12pm ‘til 2:30pm Wednesday through Friday.