The Cry Baby crew will open two new venues in 2021 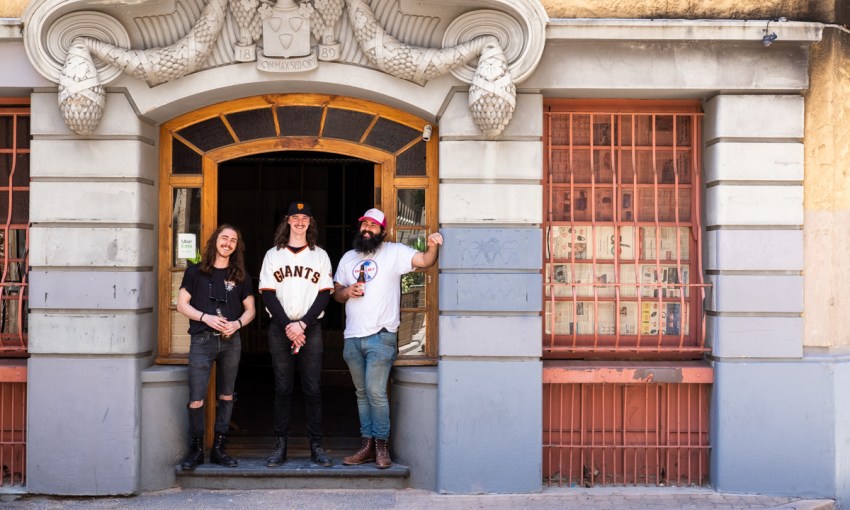 Inside the old Red October tenancy on Gilbert Place, all traces of the Russian restaurant and bar – and its hidden basement bar Suzie Wong – are gone.

For the last two months, founder of Cry Baby, Jon Di Pinto, and new business partners Sean Howard and Matt Blyth have been paring the space back to its 19th century brickwork.

Upstairs, a new step-up bar is being constructed, and downstairs the room is being entirely reoriented.

By 1 February 2021, the team will launch country and western saloon Shotgun Willie’s at ground level, and Memphis Slim’s House of Blues in the basement.

Each venue will exist and operate separately, save for the kitchen and shared toilet facilities, but each will draw on the Americana stylings that have made Jon’s first bar, Cry Baby, such a success.

“It’s going to be a truck stop/saloon hybrid thing, all of that sort of stuff. A bit country and western, that whole thing,” Jon says.

Shotgun Willie’s main space will feature a step-up bar with stools, booths around the edges, and a stage. The bar will pour American beer, whisk(e)y and finely crafted cocktails.

Overall, the bar’s offering will be uncomplicated.

“We’ll have four American beers on tap, and then bottled Millers and Coors and Budweiser and all of that sort of stuff. Very basic wine. It’ll be something you would expect not to get,” Jon says, sipping from a bottle of Budweiser.

“And then the rest will be whisky. Lots of Bourbon. That’s going to be the main focus, just playing on that whole American-style thing again. Not expensive whisky, real $10 a shot.”

The food will be barbecue, with chef and Adelaide barbecue figure Kane Boase (of The Smoking Joint) on board for the concept.

“Kane does our barbecues at all the Cry Baby stuff. He’s done the Bourdain one and all the other ones we’ve done, and he specialises in American barbecue,” Jon says.

“Everything’s going to be served… wrapped up in foil and paper bags. We’re still trying to play on that casual diner dining experience, not something where you would come sit down and have a proper meal.

“We’ll do food challenges, we’ll play on that, have a bit of fun with it.”

There’ll be live music upstairs at least every weekend, programmed with the country and honky-tonk theme in mind. As the bar finds its footing this is likely to expand to more days in the week. 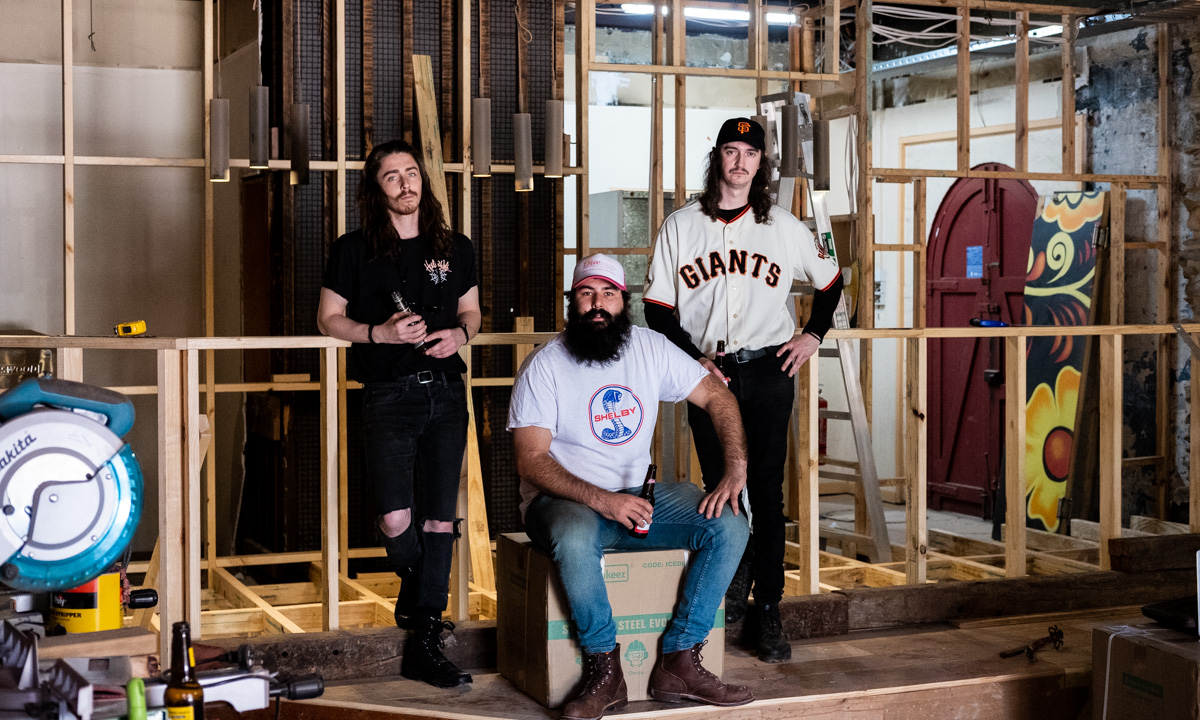 Sean, Jon and Matt at what will be Memphis Slim’s step-up bar

Downstairs, the crew have done as much to separate Memphis Slim’s from its upstairs neighbour as they can. A new entryway has been established from the side of the venue, with a passage that slowly meanders below, before opening up into a space to be anchored by both the bar and stage.

Similar to upstairs, Memphis Slim’s will have live music every weekend at the least, with a focus on blues. A menu of smaller eats will come from the same upstairs kitchen, with a Chicagoan influence.

“This is going to be more sophisticated, in our own style,” Jon says.

“It’s going to be sophisticate in a bit of a dive-y way. A bit unpolished – that’s how we do things, we’re not perfectionist in that way.”

Both bars feature breakout areas, with intimate boothing and a dart board upstairs and a (free) pool table downstairs.

On design, Jon contracted Stephen Duddy, a retired architect and family friend, to help create both spaces. The materials have been salvaged from various locations (the stage downstairs is made from an old Prince Alfred College basketball court found at Adelaide Salvage). 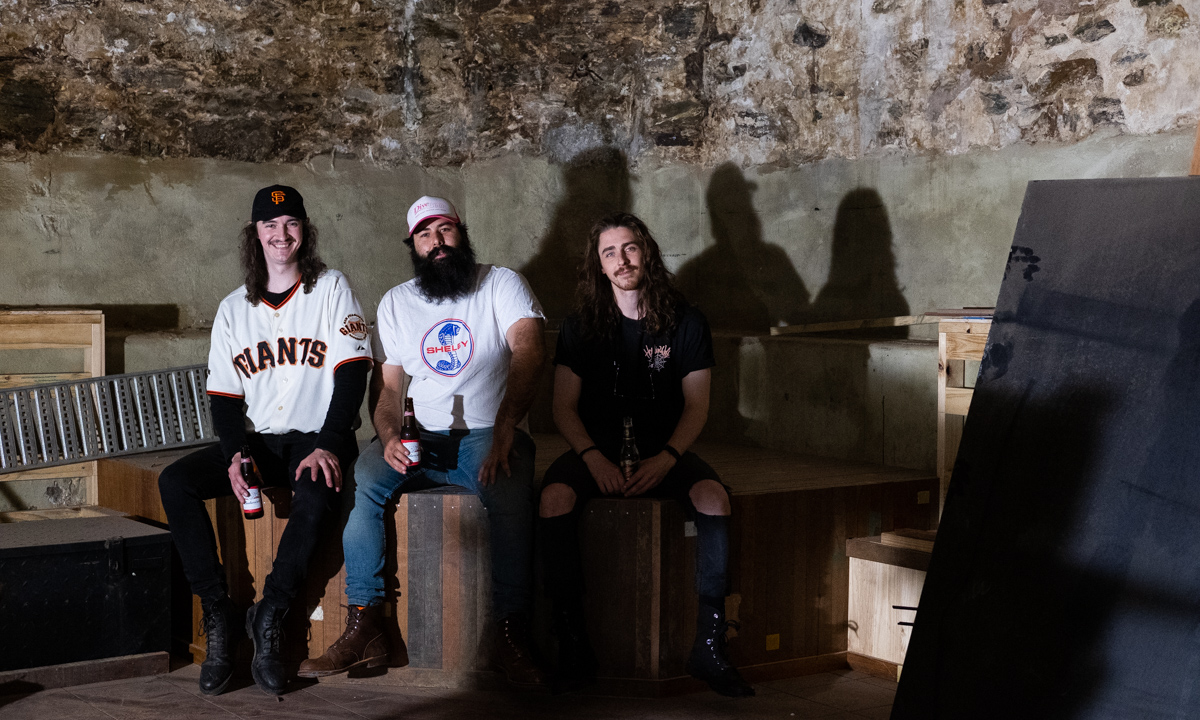 The trio atop an old basketball court

While Jon holds great affection for Cry Baby – his ever first bar – being so involved in the design and procurement has been an enriching experience.

“There’s something different about sitting there and watching someone do it, and you go, ‘Well actually, I can do that. Why not?’” Jon says.

“That’s what we did in this one. Just to be a bit more attached to it personally. It’s the first one all three of us are doing, so it’s nice to all be involved in that way.”

The trio hopes that this will result in an aesthetic that draws people in for its idiosyncrasies, as well as for the specifically American offering.

“There has been a flooding of very similar bars in Adelaide,” Sean says.

“They are all very aesthetically pleasing and well-rounded, all served in a very similar manner, with a very similar product offering. [We’re aiming] at people who just want to go somewhere different for a bit.”

“It’s also getting people who didn’t know they would enjoy this place, and then they come here and go, ‘Wow, this is actually really fun.’ You might not know you wanted to come here until you come here kind of thing,” Jon says.

Both Shotgun Willie’s and Memphis Slim’s will open by 1 February (or thereabouts – they may launch at separate times if need be).

Though 2020 has been a strange, complicated and difficult year, Jon is excited about the prospects of 2021.

“I’m feeling good about 2021. I think everyone’s going to be a bit of a caged lion coming out of it, once things do ease properly,” he says.

“There’s obviously still a massive amount of people who don’t see the point in going out with restrictions and are choosing to do different sorts of activities.

“I think when we do get to a point of being opened back up to the full capacity, or even close to it, everyone’s going to be ready to go… Whatever happened in 2020 hopefully gets made up for in 2021 – at least the back half of it.”

For updates on the Memphis Slim’s and Shotgun Willie’s build, subscribe to CityMag. Social media accounts for both venues will likely go live in early January.