Noi Vietnamese Eatery officially opens this Friday night, offering a refined take on the home-cooked Vietnamese-Australian food the Nguyen family was raised on.

From the blank canvas we witnessed at the beginning of September, Noi Vietnamese Eatery has come to fruition at the top of Glen Osmond Road and officially launches this Friday, 15 November.

Through the large custom-built single-pivot door, the first sight greeting Noi diners is an atrium filled with greenery and flowing water, leading through to the restaurant’s market garden, planted out with budding chillies, tomatoes, eggplants, and a range of herbs.

Entering the restaurant, to our right is a small waiting area and to our left is the expansive dining room, flushed with natural light coming in through the eastern windows and across the garden. A bank of booths separates the space into an open dining section and a more intimate space facing the bar toward the back of the restaurant.

Elements of owner Thy Nguyen’s design aesthetic come through in the materials and fixtures used throughout the space, light timbers and brass producing a brighter space when compared with her CBD venue, Shibui, and its darker tones.

On the day CityMag visits, a couple of days before launch, Thy and her husband, Quang, are busy in the kitchen testing dishes, with the assistance of Thy’s mum, Tam Tran. Thy’s dad, Thich Nguyen, gives us a quick tour of the garden, which he and Tam – farmers by trade – planted.

“Everything in here we use, basically. We want it to be functional as well as looking good,” Thy says.

“It’s kind of a shout out to [our parents] as well, because they taught us a lot.”

Thy’s younger brother, Toan, and his wife, Nhi, put finishing touches on furniture (with the help of Shibui co-founder, Lisa Chao) and start to set the tables throughout the space. Elsewhere, Thy’s older brother, Phong, is en route to the restaurant with extra tabletops in tow. 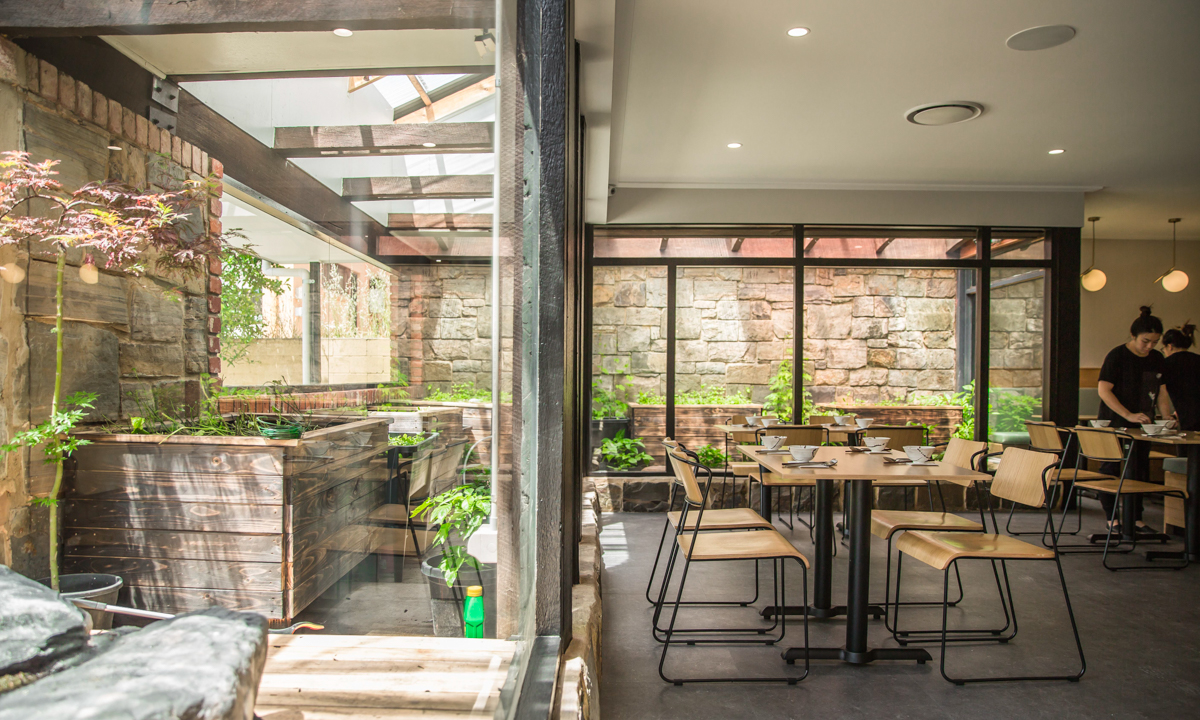 With the rigid Friday deadline looming, the space is buzzing with energy, but there is not a note of stress in the air – testament to the extended Nguyen family’s long history working in hospitality alongside one another.

As Thy and Quang sit for a quick chat, the couple beams with excitement and anticipation at the thought of how far the concept behind Noi Vietnamese Eatery has come.

“From our conversations in the car and at home to it actually being real now is actually crazy,” Thy says.

“All of our hard work is finally coming together and becoming real.”

First, CityMag enquires about the menu.

The food at Noi Vietnamese Eatery 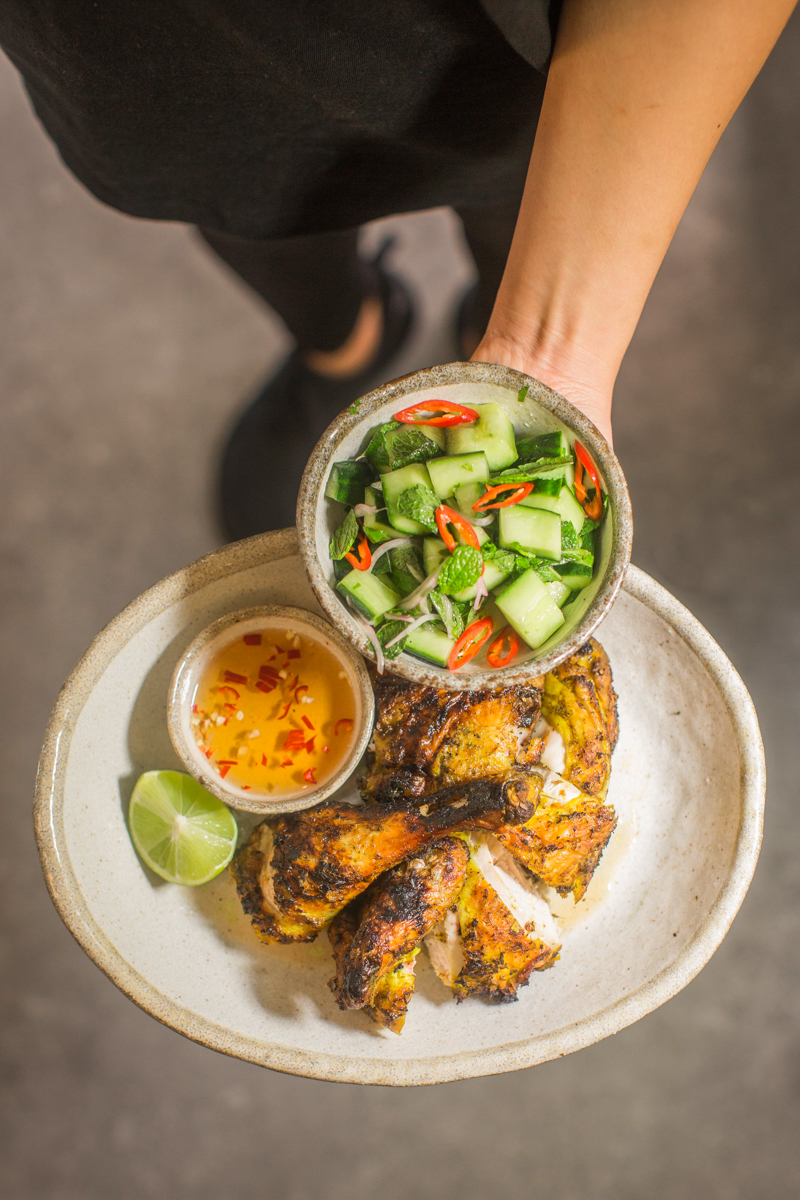 Years of discussions have honed the inaugural Noi Vietnamese Eatery menu to what Thy describes as a “banging” range of crowd-pleasing and flavourful dishes.

As an introductory menu, the team have made their first offering super approachable, with the purpose behind each dish being to introduce the concept of Vietnamese-Australian cuisine to Adelaide diners, rather than striving for a hyper-authentic rendition of Vietnamese food.

By way of example, Thy points out the chili salt lamb ribs.

“We grew up here, so obviously lamb’s huge for us, and at our barbecues Mum would marinate lamb in the Vietnamese style and chargrill it,” she says.

“It’s not traditionally Vietnam Vietnamese, but it’s Australian Vietnamese, what we grew up on,” Quang continues.

“It’s going back to how we grew up and how our parents would cook. Lamb’s not a Vietnamese thing, but it’s a Vietnamese Australian thing. Our take on it.” 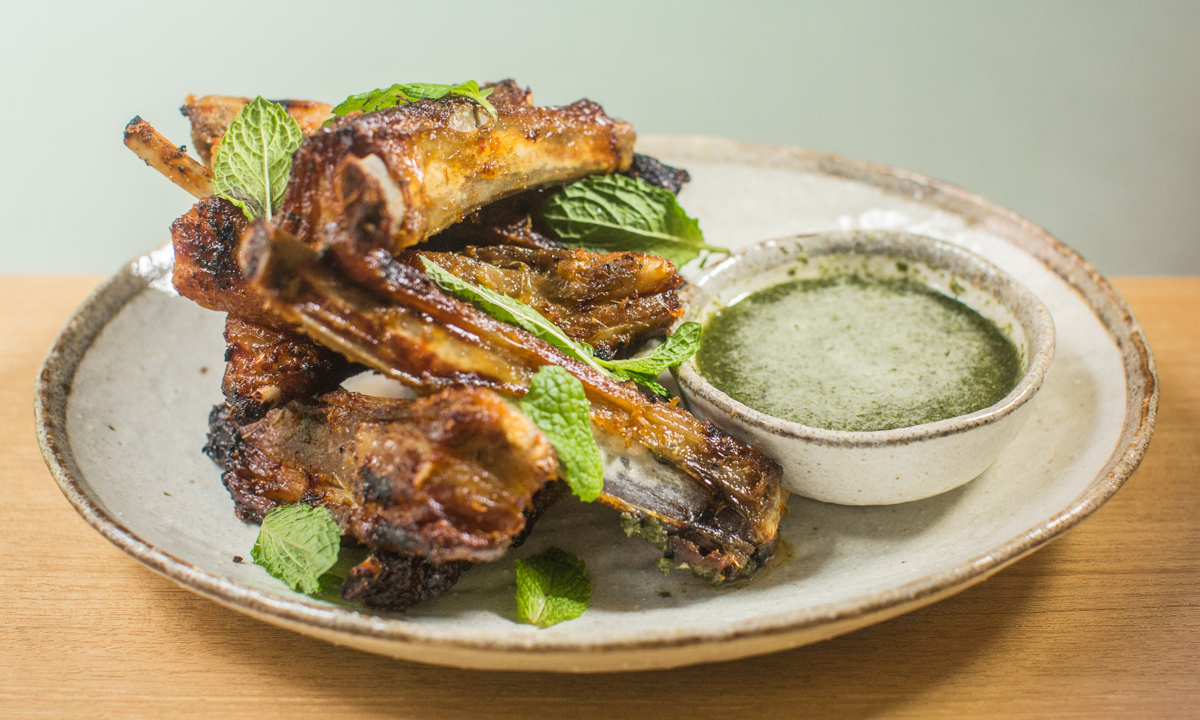 Some decisions have been made to bring traditional Vietnamese dishes into an Australian context, and then levelled up with Quang’s cheffing techniques and the many tools at his team’s disposal in the custom-built Noi kitchen.

One such example is the Noi take on thịt kho – traditionally braised pork belly and hardboiled egg in a soy broth.

“Some restaurants do thịt kho but it’s not a common, common thing that I think the general public will have eaten,” Quang says.

“It’s going to be one of the most homely dishes we have, but we’ve taken a different approach where we’ve swapped out the belly for some ribs, still braised it but finished it on the wood grill.

“It’s sort of a steppingstone to start introducing some flavours that you probably wouldn’t get in restaurants, per se.”

The plan is to establish trust amongst their clientele first, and “then we can say, ‘Hey, try this,’ and blow their minds,” Thy smiles.

“Like the fish sauce ice cream [Quang wants] to do… It’s delicious, but again, we want everyone to feel comfortable with us first.”

Quang describes the fish sauce ice cream as an “extra” rendition of salted caramel, and we know – given Devour and Shibui’s calibre – whatever desserts grace the Noi menu will be impossible to pass up. 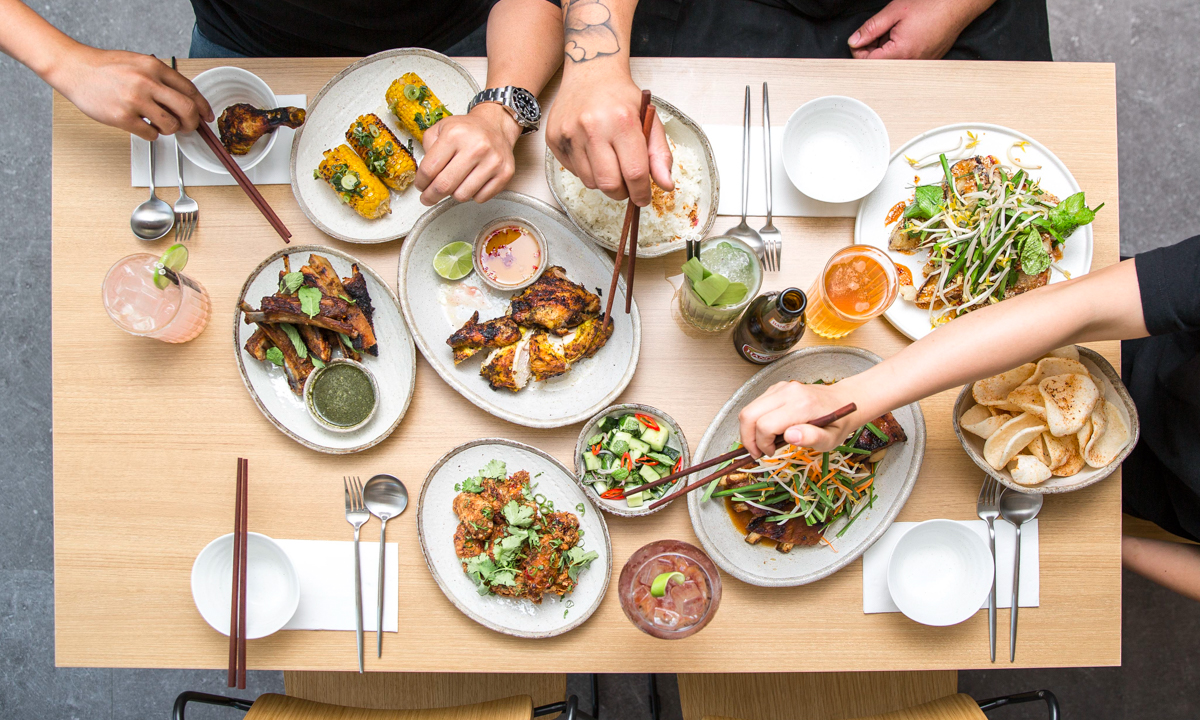 On the topic of fish sauce, Quang points out that this is a central component of Vietnamese cuisine, and because of this, great thought has gone into creating a range of sauces to carefully pair with each dish.

“Fish sauce is a core flavour of Vietnamese cuisine, so you don’t want to get stuck with a repeat flavour. So we’re adding different elements of it,” Quang says.

“There’s a generic way of doing dipping sauces that people do across the board. We grew up with a lot of variations – so there’s a specific one that’s suited to chicken, there’s a stickier one, or sweeter, sour, depending on the dish,” Thy says.

The drinks at Noi Vietnamese eatery 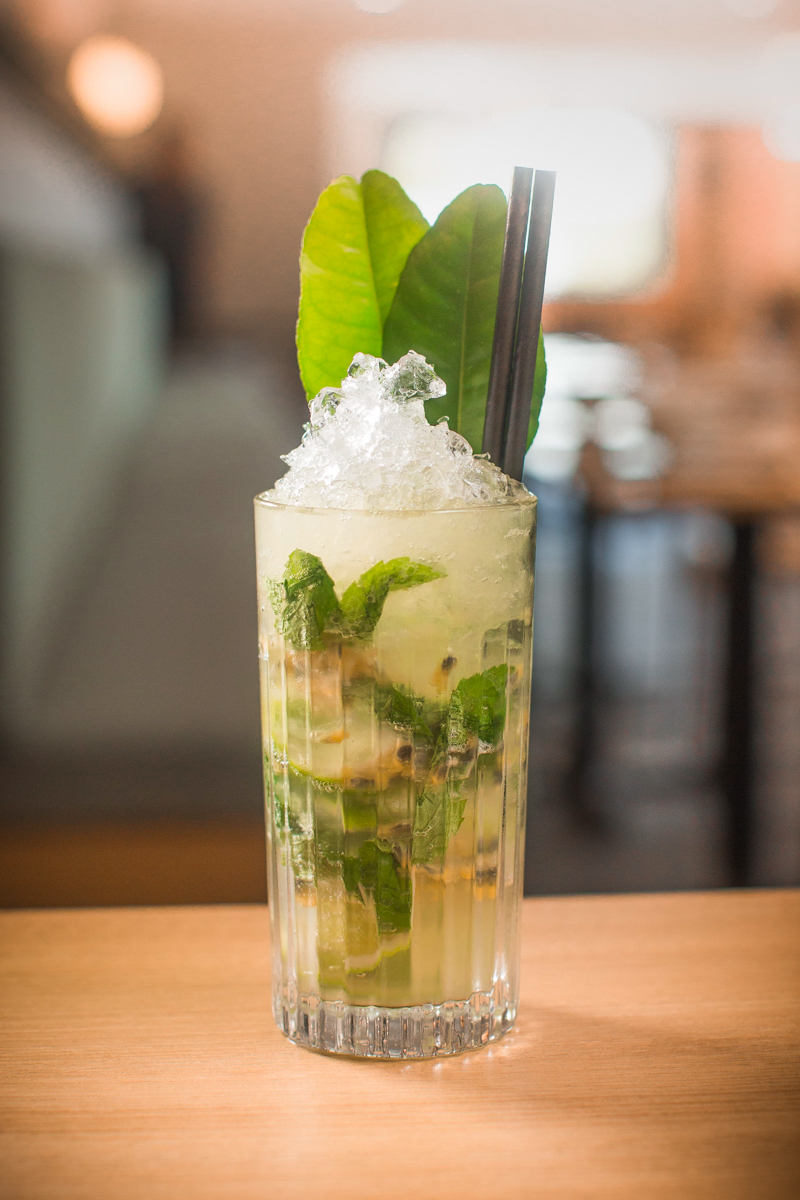 “Beer goes with Vietnamese food really well,” Thy says, and so the team has commissioned a house lager, made by Mountain Goat. There is also Mismatch Session Ale and Tiger Lager on tap. In package, there is Bia Saigon, Hanoi Beer, and 333 from Vietnam, Beer Lao from Laos, and Kirin Ichiban from Japan.

A range of local spirits sits on the back bar, with gin a predominant feature, including a house kaffir lime gin, made in collaboration with Imperial Measures Distilling.

There is also a short list of cocktails – a house spritz, mango margarita, passionfruit mojito and lychee Collins, each taking flavour cues from the Noi food menu.

The team has also designed a selection of house sodas.

“There’s lemon, lychee – a bunch of fruits – and we’re making the syrups as well, through a puree, so it’s a real, true flavour,” Thy says.

Noi’s wine selection spans both large and small producers and is organised by wine category and flavour profile, to make the selection process easier.

What’s next for Team Nguyen 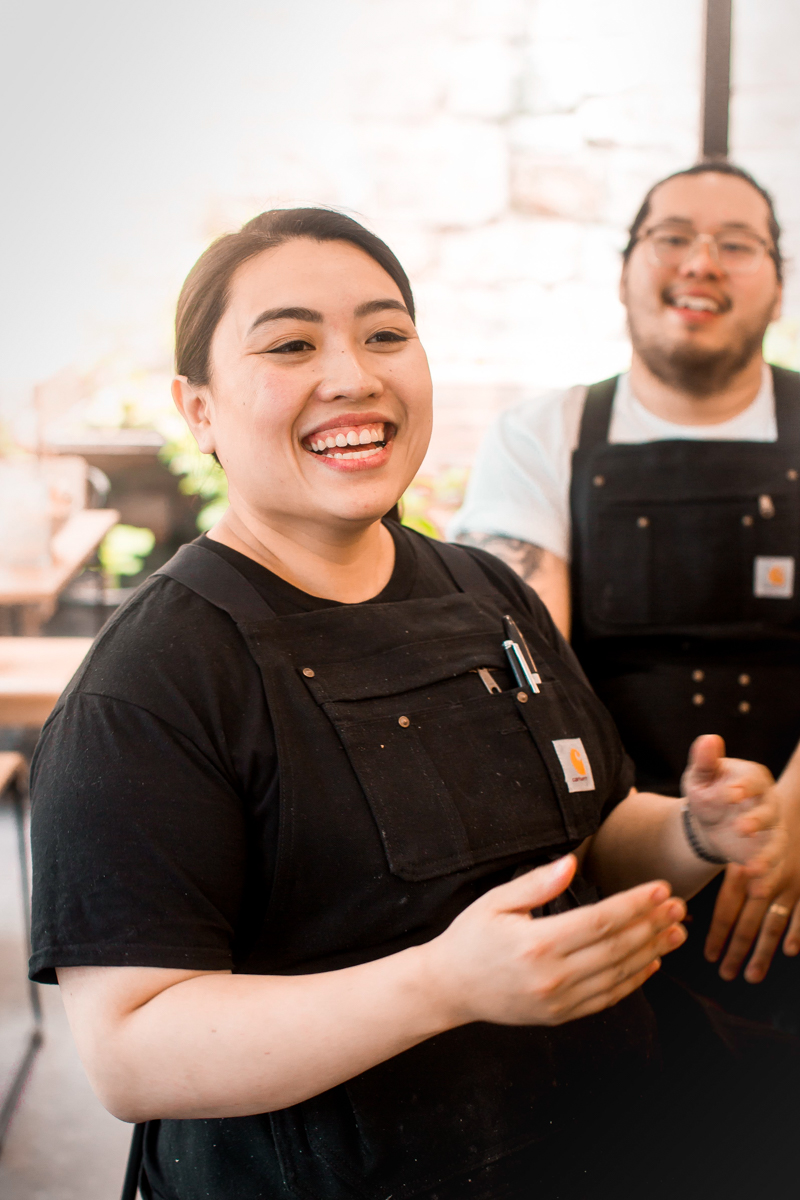 L-R: Thy Nguyen and Quang Nguyen

It’s cliché to ask any high achiever how they manage to get so many things done, but with the year the team have had, we have to ask.

Twenty-nineteen started with Thy, Quang and their Shibui partner Lisa creating a social media storm with their dessert offering at Gluttony during Fringe, and again a month or so later at Tasting Australia. The couple got married soon after, and all the while had been plotting and building this entirely new restaurant.

Quang expects a feeling of great relief after the first Noi service on Friday night, but by no means does he and Thy plan to slow down. Already, there is a future project in the works.

“There’s just that itch for not wanting to be complacent,” Quang says.

“There’s a lot of things that I’m particularly interested in, and it’s just a matter of timing, right time, right place to be able to do it.”

“The intention behind it and the passion is what really drives us,” Thy says.

“Because at the end of the day, it’s tiring. You get very little sleep, but it’s worth it and we’re happy.

Whatever comes next, the guarantee is it will be thoughtfully considered and ultimately delicious.

Noi Vietnamese Eatery officially opens Friday, 15 November. The restaurant will operate from Wednesday through to Sunday from 5pm ‘til 10pm(-ish). The operating hours are likely to extend in the coming months (the light during the day is incredible, so here’s hoping for lunch trade.) 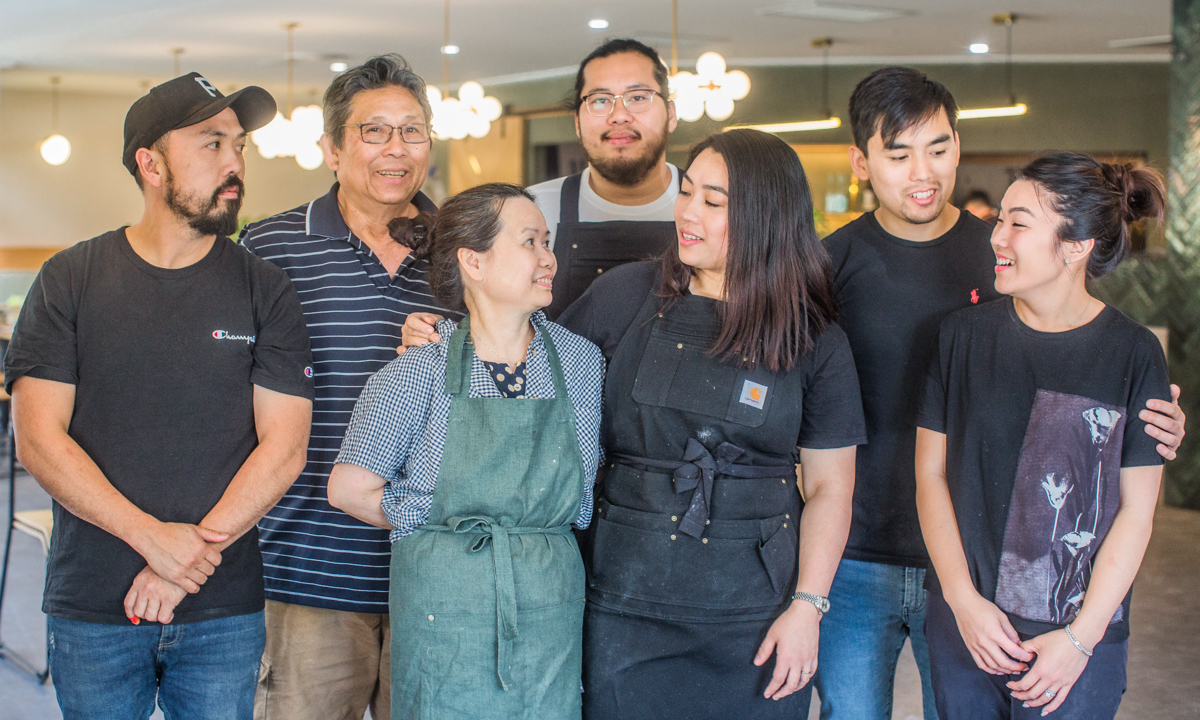