After an extended build period due to COVID-19, the family Sorgini have opened their Modern Italian restaurant, Bambini, featuring the much-loved home-style recipes of chef and the family's patriarch Franco.

CityMag met the family Sorgini back in January this year, when Franco and his daughter Elena laid out their plans for a family-oriented, ‘Modern Italian’ restaurant on Peel Street.

We visit once again, in mid-July, the space unrecognisable from its prior life as The Map Shop, and now with a few weeks of trading under the kitchen team’s belt.

We’re greeted by Chrissie, another of Franco’s six children (all of whom have had a hand in shaping the restaurant), a PR and marketing professional looking after the restaurant’s presence on social media – in addition to her day job in cybersecurity.

Teresa, the Sorgini matriarch, watches over the restaurant, while siblings Laura and Michael work the floor and bar, respectively.

In our January conversation, the family flagged an intention for Bambini to open in February this year. This was, of course, derailed, but Chrissie says the family turned the pandemic into a positive by using the time to “get things done properly, without needing to rush to open.”

“Luckily, we were able to build over that period of time, and then come June, right as the restrictions [lifted]… just do small amounts of people,” she says.

“And then the Monday after we opened, they lifted it to one in two metres and we could go to 50 people, so we really weren’t impacted at all.”

The concept of the restaurant is unchanged, with the menu drawing heavily on Franco’s experience as a chef, and in the dishes his family has always loved.

Rather than competing with the many pizza and pasta bars across Adelaide, Bambini intends to fill the little-understood gaps in Italian cuisine.

“[There’s an idea that] Italian food’s pizza and pasta, but there’s just so much more to it,” Chrissie says.

“If you look at our menu, you’ll see that traditional osso buco, which is something [people have] been making for years with offcuts.

“And now, it’s $25 a kilo in the supermarket, and we serve it with a beautiful mash and a gremolata sauce – it’s got a beautiful citrus flavour.”

As a seasoned patron of Franco’s food, we ask Chrissie for her go-to dishes, and without hesitation she points to the zuppa.

“[It’s a] seafood soup in a house-made brodetto, which is fish stock,” she says.

“Again, that’s Dad’s recipe, cooked by our chefs, but Dad’s recipe, and we’ve had some real rave reviews about how beautiful it is.

“A lady last week mentioned she was also from the same region as Mum and Dad’s origin, and she said it felt like she was back home.

“To have someone else have that same ‘It feels like home’ feeling, who’s never met us, was really heart-warming, essentially.

“That and the spatchcock, to be honest, is just beautiful. Obviously we do lots of roasted meats and that sort of thing, and this is… just beautiful, succulent, served with the leek mayonnaise and fingerling potatoes – sensational.

“They’re my two that you really can’t go past.” 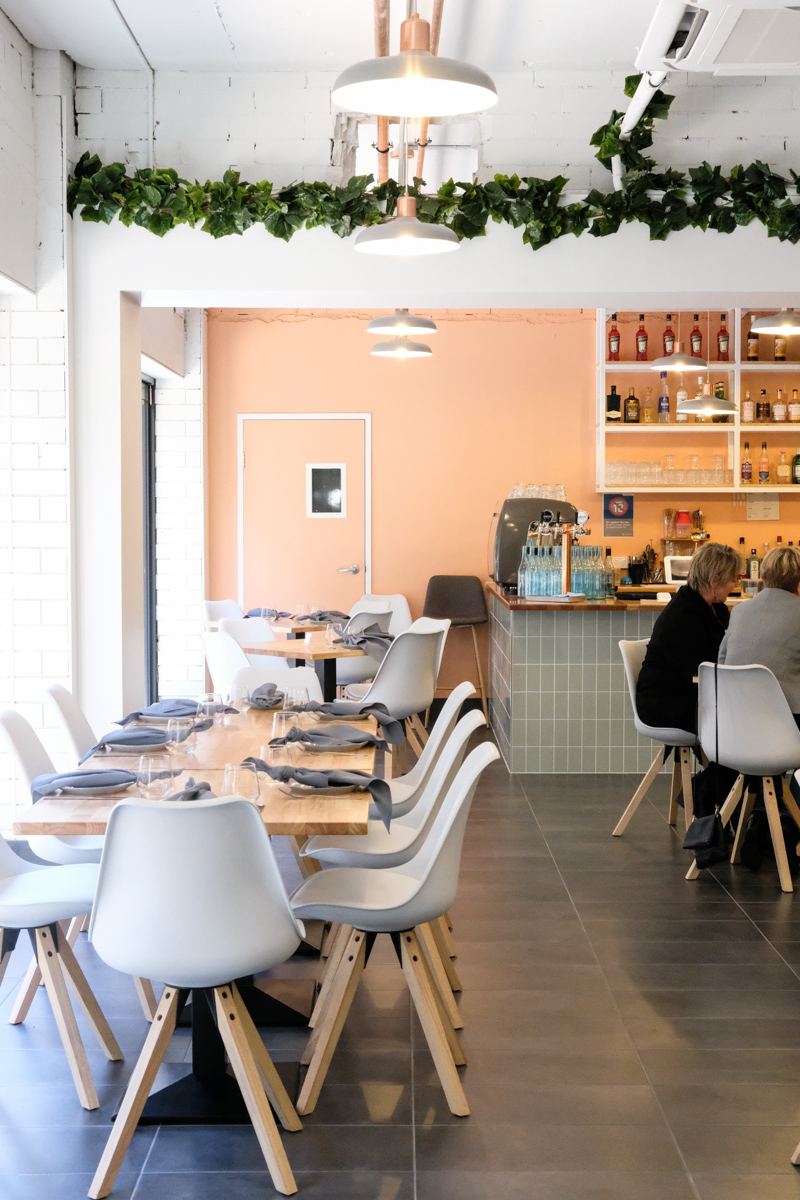 Opening a restaurant in this time of COVID-19 is filled with uncertainties, but Chrissie has been surprised by just how warmly Bambini has been received so far – and not just for its food offering.

“I thought we would be open for the dinner rush and everyone would go down the street for drinks,” she says.

Both on the first Friday and Saturday, we were open until 1am or whatever it was, just for drinks, which shocked me.”

It was the family’s intention – particularly that of Teresa and her son Adam, who drove the design of the restaurant in collaboration with SpectrA Building Designers – that the restaurant emulate the feeling of a European summer, and so it is perhaps an endorsement of their vision that people have decided to stay on for spritzes long into the evenings.

“Obviously we have the space, we have our outdoor tables, and we’re working on building the ambience outside with some lighting – because, again, we did not anticipate having the level of interest in drinks and stuff like that, or people willing to sit out in the cold if it’s the only place they can get a table,” she says.

It is early days, and still a tentative time for the hospitality in general, but Chrissie is optimistic about Bambini’s future, and that of the city.

“My hope is that COVID stays away and we don’t have another outbreak, like Melbourne and New South Wales, and I think we’re going in the right direction to maintain this,” she says.

“I think this coming spring and summer is just going to be huge for everybody, for our street, for Leigh Street, for every street, which is super exciting, knowing that there is such a big part of our city that’s going to wake up soon.”

Bambini is open Tuesday through Friday for lunch and dinner, and Saturdays for dinner service only.