The founder of vegan food truck Later Gator, Chloe Mattner, is preparing to launch The Gator Club, serving the vegan and gluten-free goods made famous by her travelling coffee van. 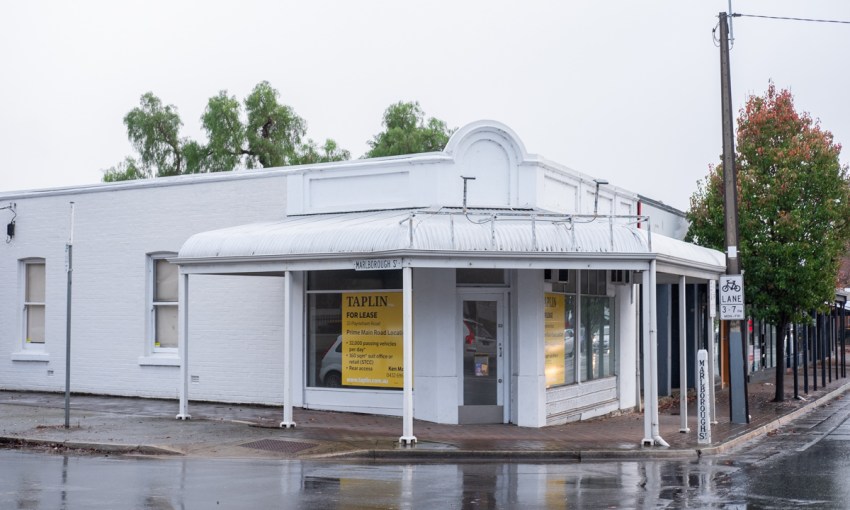 Since Later Gator’s launch in December last year, Chloe Mattner has had her hands full thanks to the mobile café’s popularity, taking it around to markets across Adelaide and serving locals in its usual spot in Kensington Reserve.

When CityMag spoke to her in January, she revealed her plans to one day turn the business into a permanent store in Adelaide’s east. Now, her dream is coming to fruition, with her first brick-and-mortar store, The Gator Club, opening in College Park in August this year.

Focusing on bringing delicious vegan and gluten-free food to the masses could be considered too niche a market, but the public response has been overwhelmingly positive from both vegans, coeliacs, and dietary-unrestricted foodies alike.

Combining her two businesses – Later Gator and her online bakery Chlo’s Vegan Club – is the main idea behind The Gator Club, which will start off as a hub for both her baked goods and upcoming range of matcha, chai and hot chocolate blends, before launching as a café later on.

Part of the reason the search for a store became so urgent was the business’ growing expansion.

“I have run out of room in my kitchen – I have a kitchen in my garage that I’ve converted and I’m at capacity – so Gator club is going to be a smack in the middle combination of both businesses,” Chloe says.

“Mainly it means people won’t have to come to my house to pick up cakes and baked goods, it’ll all be at the shop.” 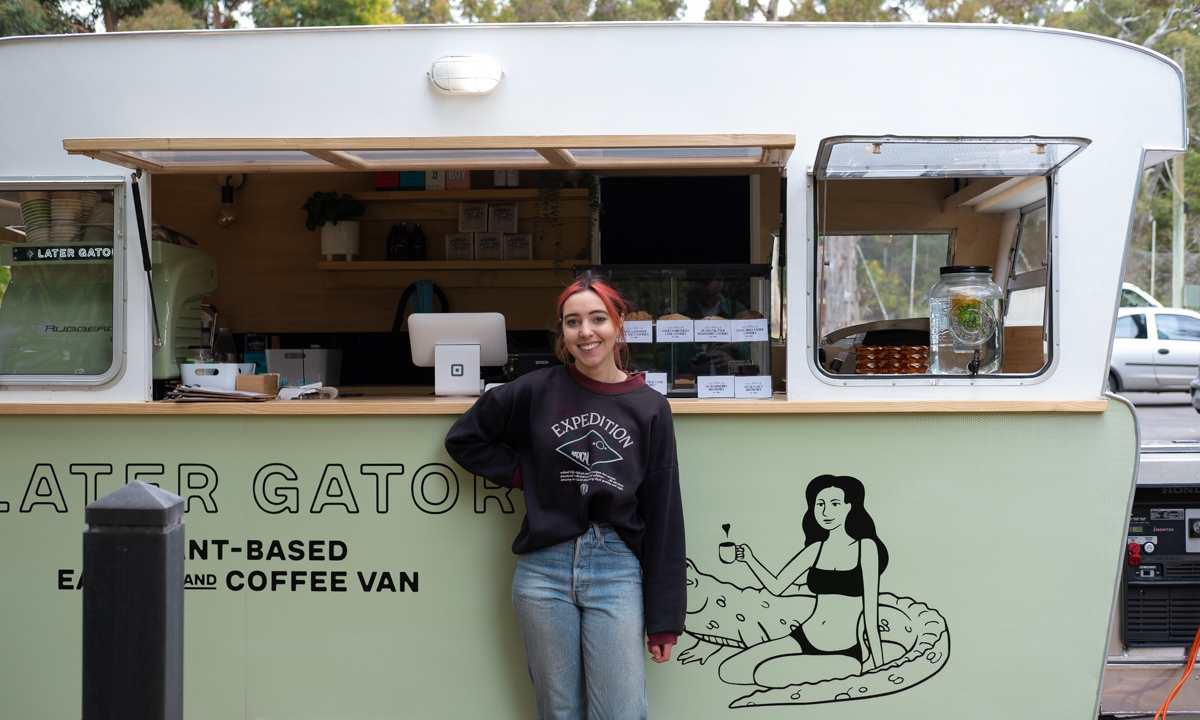 Chloe Mattner with the Later Gator van in Kensington Park

Finding the right place to set up shop was a bigger challenged than Chloe first expected, with places either being too big or too small. However, her childhood dream of owning a corner store café in a converted deli has just about come true, as she’s secured a lease on a small former corner shop in College Park.

A former architecture student, Chloe will have a major hand in putting together the layout and design of the store.

“Unfortunately, it’s never been a café before so it’ll need a full fit out, and it’s all going through council at the moment,” she says.

“But it means I get to pick everything out from scratch as well – I got to talk to all my previous uni friends and brainstorm everything. It’s cool that I finally get to put that part of my degree to use.”

On the menu will be her classic Later Gator offerings of cookies, brownies, sweet breads, croissants and a toasted sandwich bar, all gluten free and vegan. Having her own kitchen space means everything served there is cross-contamination free and coeliac-friendly.

Having put her life savings into Later Gator (which was originally meant to fund a two-year trip to Europe before COVID hit), all the money coming through the business has gone into helping set up a brick-and-mortar store. 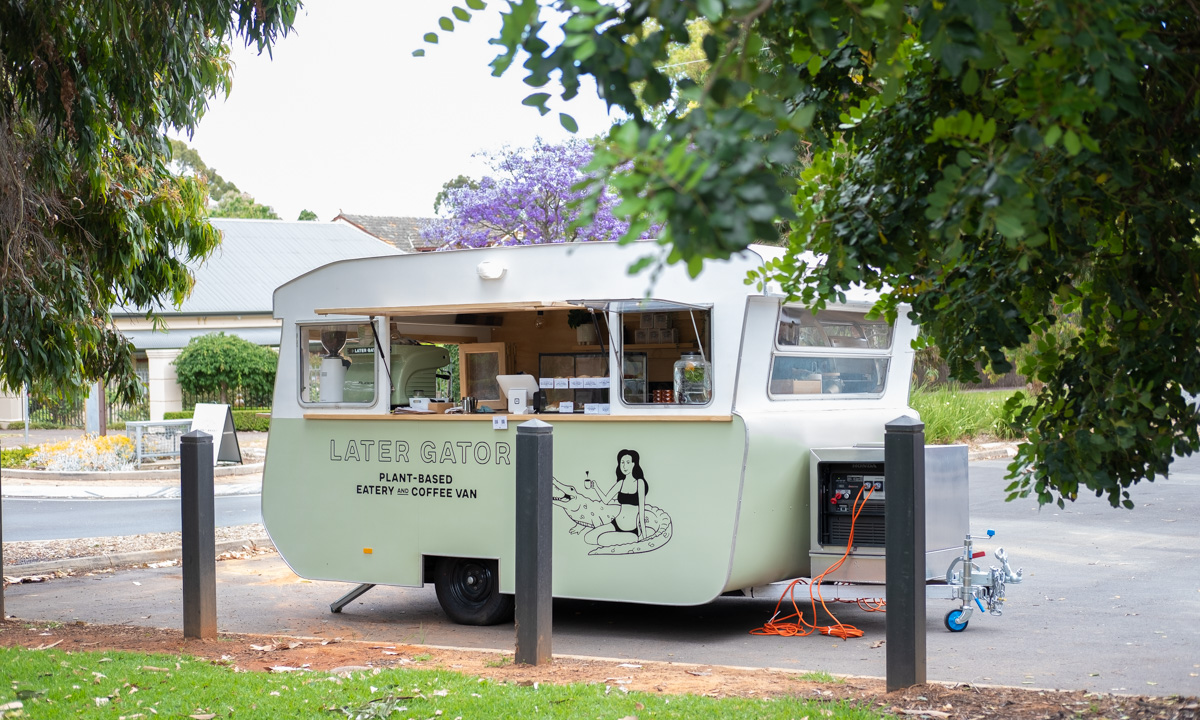 Working at so many markets has also led Chloe to develop strong friendships with other local small businesses, and she hopes to set up an artisan retail space in her store to provide them space to sell their wares.

“Some people only sell at markets and don’t have the money or the opportunity to sell through wholesale or set up their own shops, so I’m going to make that opportunity for them,” she says.

“I can showcase all my market friends’ stuff – not like a gift shop, but somewhere where people can go to buy Adelaide-made goods.”

As for baking and selling only vegan and gluten-free food, Chloe isn’t worried about trying to target only one specific plant-based audience.

“My partner and I have been vegan for seven years now, we don’t go to big protests or anything. It’s just what we eat,” she says.

“I just want a beautiful café, a really nice spot for people to come and enjoy really good coffee and food and no one gets turned away.”

You can check out Later Gator and Chlo’s Vegan Club on their websites.