To Later Gator founder Chloe Mattner, launching a wholly vegan and mostly gluten-free "open-air" café in Adelaide's eastern suburbs was an obvious choice, given the few options available in the area.

On the western fringe of the lush Kensington Reserve, Chloe Mattner sets up a pale green van every Thursday, Friday and Saturday morning, from which she serves an entirely vegan offering of coffee, toasties and sweets.

CityMag visited Later Gator, the mobile café business, on its second day of operation, in early December 2021. Chloe conveys to us pleasant surprise at the initial response to her shop.

The founder knew she was onto a good thing with her plant-based baked goods, which she’d previously established through wholesaling to cafés and appearing at markets. More daunting, though, was the idea of serving her clientele coffee with solely alternative milks.

“I don’t serve dairy or anything, so I was a bit worried about the response on that. But everyone was lovely,” she says.

The Later Gator menu is kept short, with granola and a few toasties on offer – such as the ‘Almost Reuben’ and the ‘Gardener’, the latter of which is made with miso-glazed pumpkin, sauteed purple cabbage, butterbean pesto, baby spinach and vegan mozzarella (aka notzarella).

There is a more extensive range of sweet options, with a selection of brownies, cookies and croissants available.

In addition to being entirely vegan, Later Gator is also mostly gluten-free. 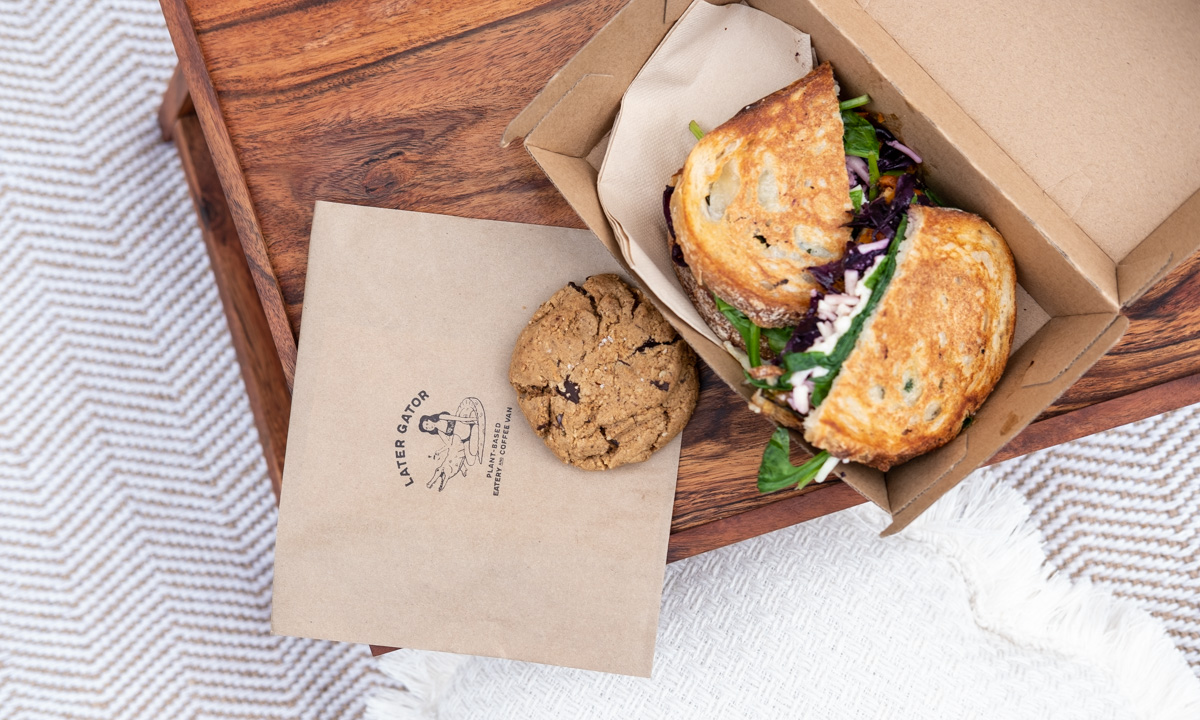 Coffee comes from Hindmarsh roaster Coffee in Common, in strictly espresso formats. There is no dairy milk available, but oat, almond and soy alternatives are used, as well as ‘Gator Milk’, which is a blend of all three that Chloe says most closely resembles the taste of dairy.

“It’s just a ratio of all my barista milks that equals really good,” she says. “That’s what I drink as well. It’s pretty good. And the reception on that’s been pretty good as well. I’m not mad about it. It’s what my parents drink now.”

We speak with Chloe from the rear window of the Later Gator van, nicknamed Van Morrison, as she makes coffee for the small group of customers accumulating on the stools set up on the grass nearby. Her aunty, Pam Heinrich, is helping by preparing the hot food orders as they come in.

Every so often Chloe will turn away from us to greet someone or call out an order, bringing to each customer interaction her abundantly sunny disposition. She appears to be a person doing exactly what she loves to do most.

“I love hospitality. I love talking to people,” she says, beaming.

Chloe completed an interior architecture degree but decided against pursuing a career in the field. Instead, she has collected experience in the hospitality industry over the last six years in order to bring about this long-held vision.

“Later Gator’s been a plan since literally I was in high school,” Chloe says.

“I just didn’t think I’d be able to do it until I was much older and had money behind me.

Chloe got a start in hospitality management roles at the Norwood Seasonal Garden Café, which was forced into closure in 2019. She stayed on with the new owners, but eventually left the site.

She also runs vegan food review Instagram account Chlo’s Vegan Club. After posting a recipe for brownies on the account, a café owner reached out to her to ask if she’d like to supply them to their business. Chloe took the contract and more soon followed.

Her aunty then pushed her to try selling her baked treats at markets, and she slowly developed a community around the business, which has now followed her to this latest venture.

“Honestly, it just snowballed, and I have no idea how it happened. But I’m not complaining. It’s incredible,” Chloe says.

Aside from the slight concern Chloe had in serving coffee without a dairy milk option, she has never considered her entirely plant-based concept as anything other than an obvious opportunity.

“It honestly feels like a niche market, of being vegan and [mostly] gluten-free,” she says.

“If I don’t get the vegans, I get the coeliacs. I just want stuff that everyone can have, which is really, really important to me. I don’t want anyone to miss out.

“But I don’t want the meat eaters to even realise that it’s vegan. I just want them to enjoy it because it’s good.”

Chloe chose to start Later Gator as a mobile café so as not to be too tied down. She once had plans on moving to Europe, but they were scuttled due to the pandemic.

And at 24, she approaches the idea of a long-term lease with level-headed apprehension.

“I didn’t want to be stuck down with a lease and stuff like that,” she says.

It was important to Chloe that the level of experience at Later Gator matched a bricks-and-mortar site.

“I just call myself a mobile café, an open-air café,” she says. “I’m more than a coffee van, but I’m not as much as a café, if that makes sense.” 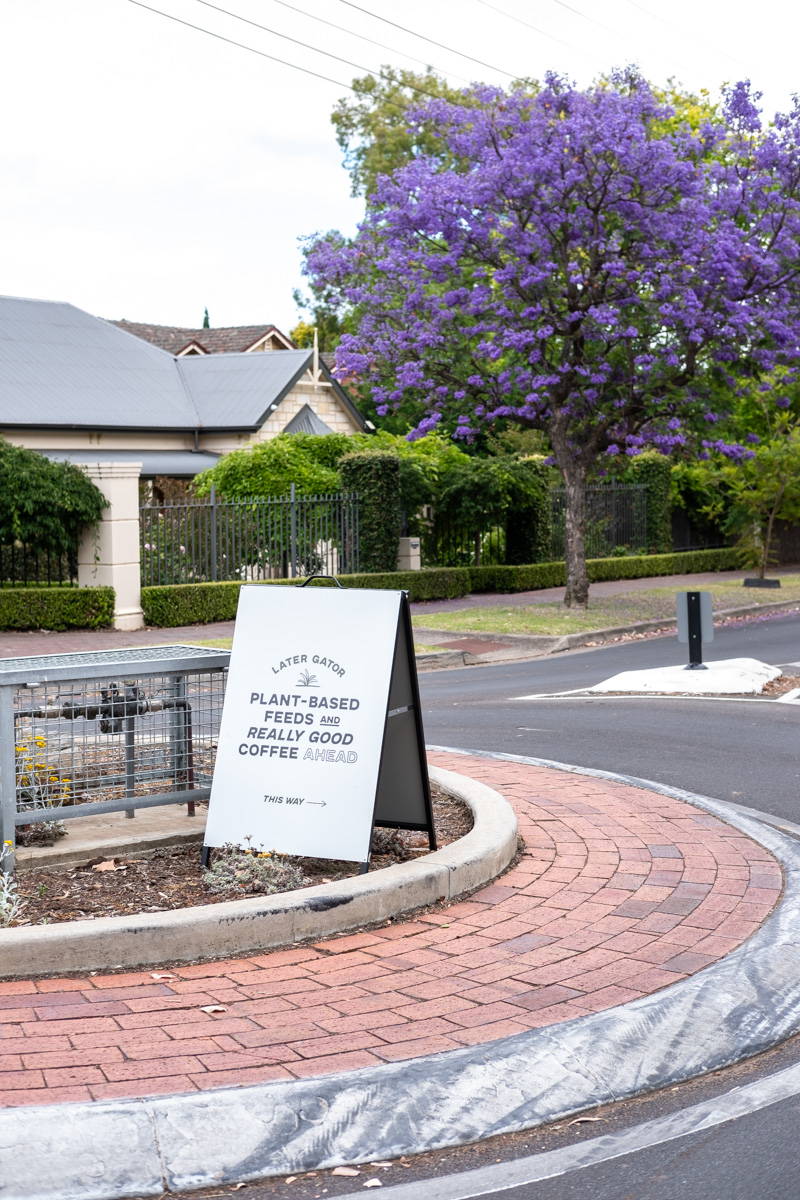 Now that Later Gator is launched, Chloe has started to look wistfully at every vacant café site she walks by.

“Eventually, yes, I will be bricks-and-mortar,” she says. “That’s always been the long-term thing.”

If a site does eventuate, she hopes to remain in Adelaide’s east.

“We don’t have much east. Everything’s down by the beach or in the city,” she says.

For now, you can find Later Gator at Kensington Reserve on West Terrace, Kensington Gardens.

The café operates from 8am ‘til 2pm Thursday to Saturday, and also pops up at markets and events.

For more information on where to find Later Gator, connect with the business on Facebook and Instagram. 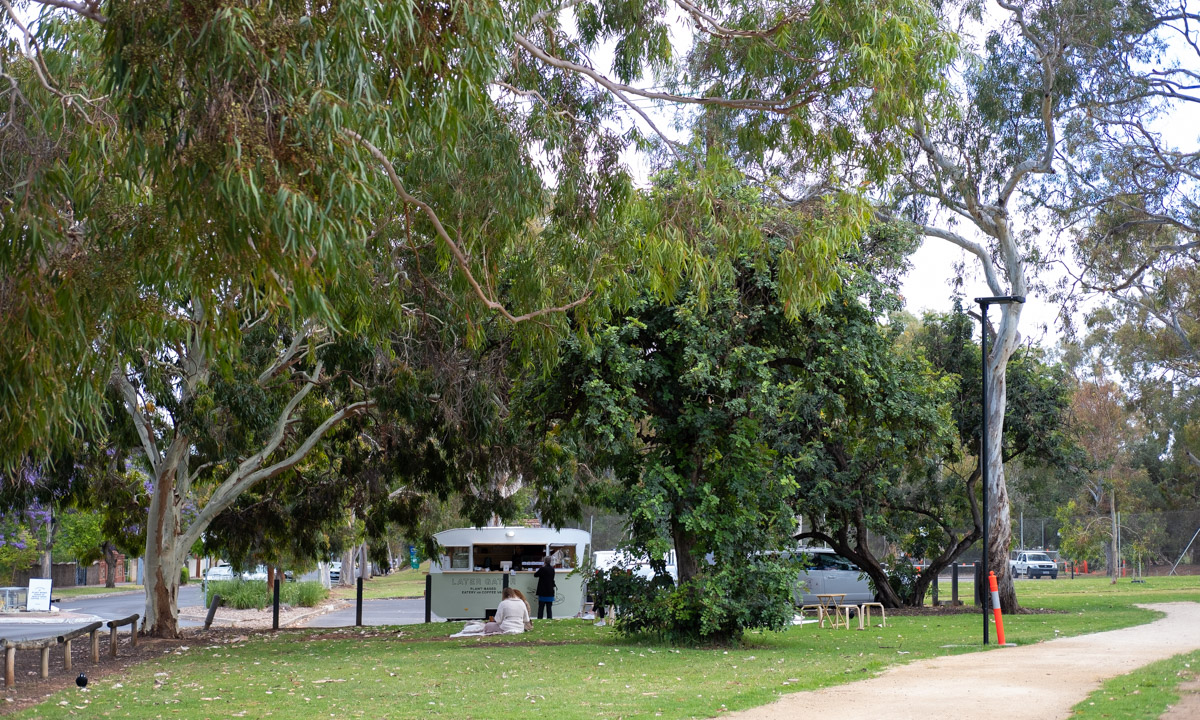