Formerly a Melbourne-based café, Coffee in Common is now located on Bacon Street in Hindmarsh, expanding to include an in-house coffee roastery and a “wholesome” brunch menu.

For a very long time, the only worthwhile reason to visit Bacon Street was to pick up bulk hummus and a souzoukaki in pita from Gaganis warehouse before the 1pm cut-off on a Saturday.

There are now two great reasons to make the trek, with café and roastery Coffee in Common opening up a couple of doors down at 7 Bacon Street.

Coffee in Common has opened as a joint venture between Sean Do and Davide Cavuoto, who first met working in Cibo stores a decade ago.

Their careers in coffee followed slightly varying trajectories, with Sean eventually moving to Melbourne to learn to roast at Bureaux before opening the first iteration of Coffee in Common in Essendon in 2015.

Davide stayed in Adelaide and worked at T Bar, Abbots & Kinney, and a few other coffee establishments. He would later travel to Melbourne every few months, also to learn about coffee roasting from Bureaux.

By the end of 2019, Davide had finished up at Abbots, Sean had closed his Essendon café, and the two began the search for a suitable location to set up an expanded version of Coffee in Common (including a 12-kilo coffee roaster) in South Australia.

The Bacon Street space, a former car detailing space, met all their requirements, including power supply sufficient enough for a roaster.

It was the openness of the room, though, that the two saw as the greatest potential within the space.

“We loved how it was just long like this, and…we knew exactly what we were going to do with the bar,” Davide says.

“We worked closely with our architect, E-Squared [Studios], and we designed the entire bar around that Modbar [coffee machine], and having everything open and a really nice flow to it.”

A long bar runs through the centre of the space, which is home to a pastry cabinet, point-of-sale, the La Marzocco Modbar machine, a dedicated manual brewing section, and some high seating.

Low seating runs along each wall parallel to the bar, and the very back end of the room is where the 12-kilo roaster (made by a friend of Sean’s in Vietnam) sits. 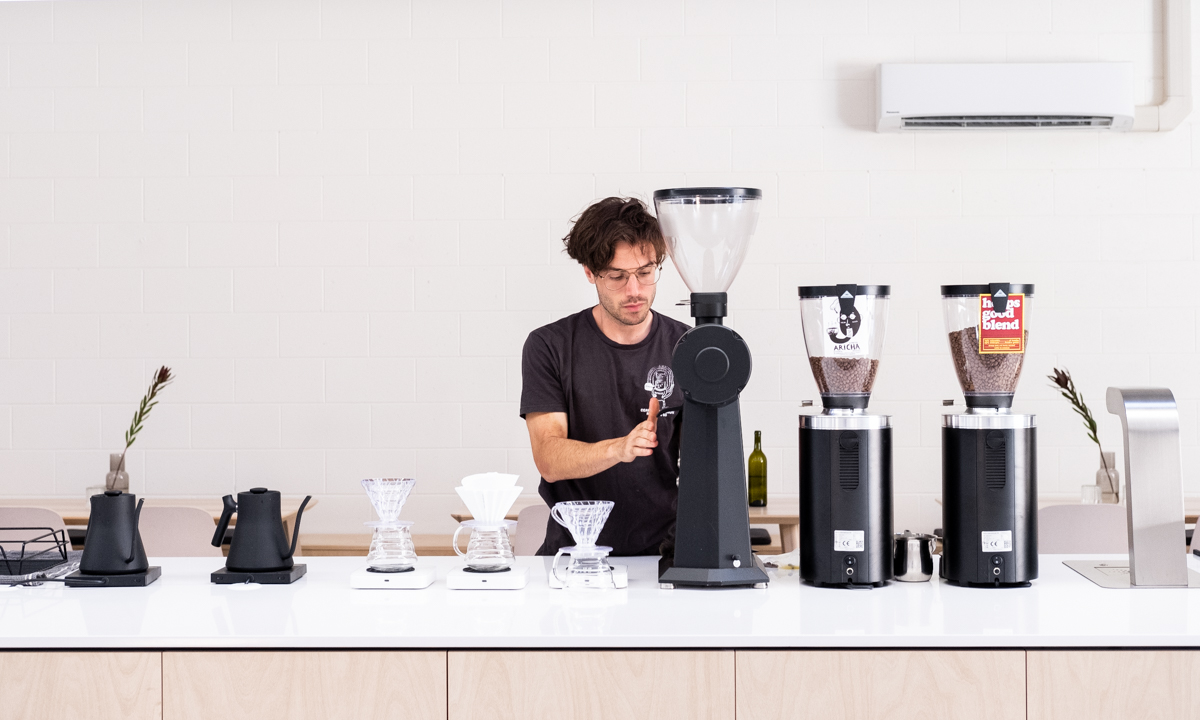 The intention behind putting Coffee in Common’s bar out in the open is to convey the level of transparency they hope to achieve in their roasting business.

“We have a very shared vision in terms of how we think coffee should be run,” Davide explains.

“The idea behind it [is] that it’s got to be transparent, we want to work with people who are passionate in the industry, and work with people that are making sure that those who are growing the coffee for us are being taken care of at the same time.” 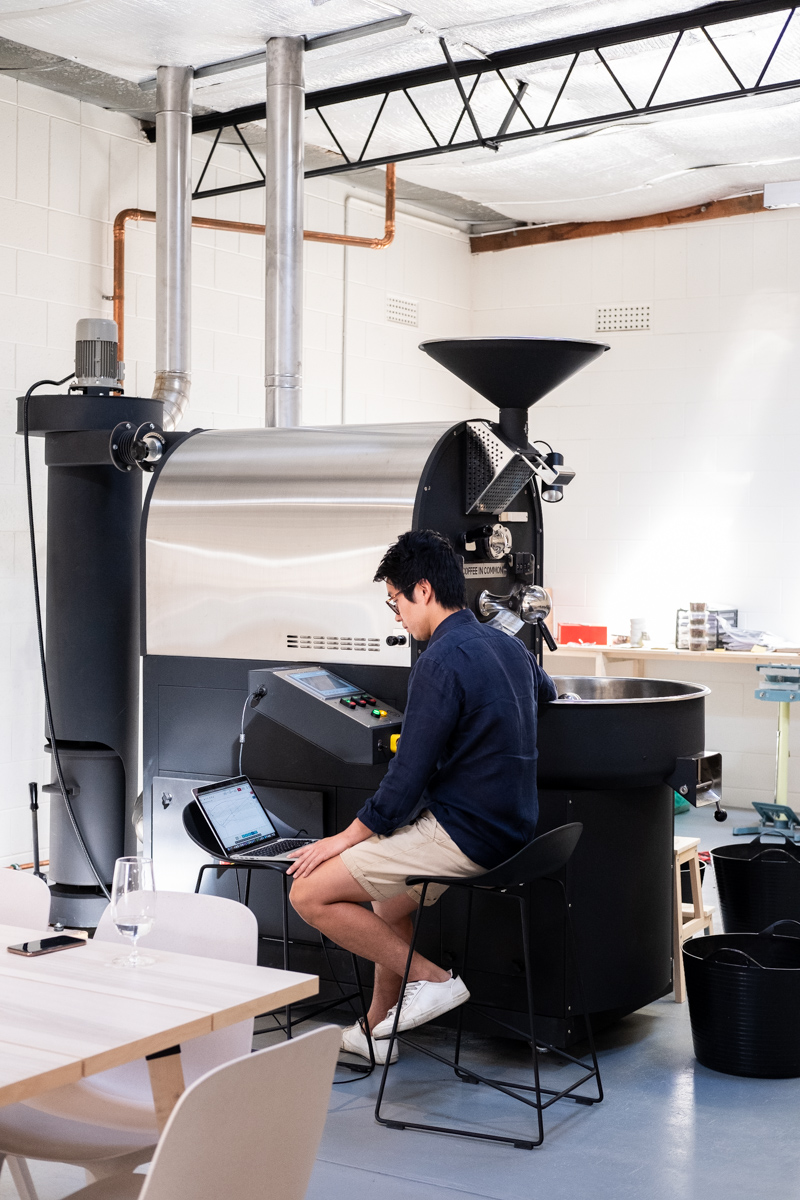 Sean Do roasting goods for Coffee in Common

The two hope Coffee in Common will become a meeting place for Adelaide’s coffee community, and not just for the range of house-roasted beans.

“[We’ll have] industry nights, where people have opened up cafés, or different parts of the industry can come in and talk about their experiences in opening up a business,” Davide says.

“There are a lot of hidden little hurdles that pop up along the way when opening up a business that you just can’t be prepared for.

“And also, we will have cupping sessions… and either work directly with green bean distributors where they host nights here – bring in some coffees, whether it’s from one region, say Colombia or Brazil – or it will be our coffee.”

Coffee in Common’s food offering has been created by chef Dieter Georg, who brings to the café his history working at Elementary and Adelaide Oval.

The cakes and donuts are made in-house by Dieter, and Davide describes the rest of the menu as “very brunchy… very wholesome food.” 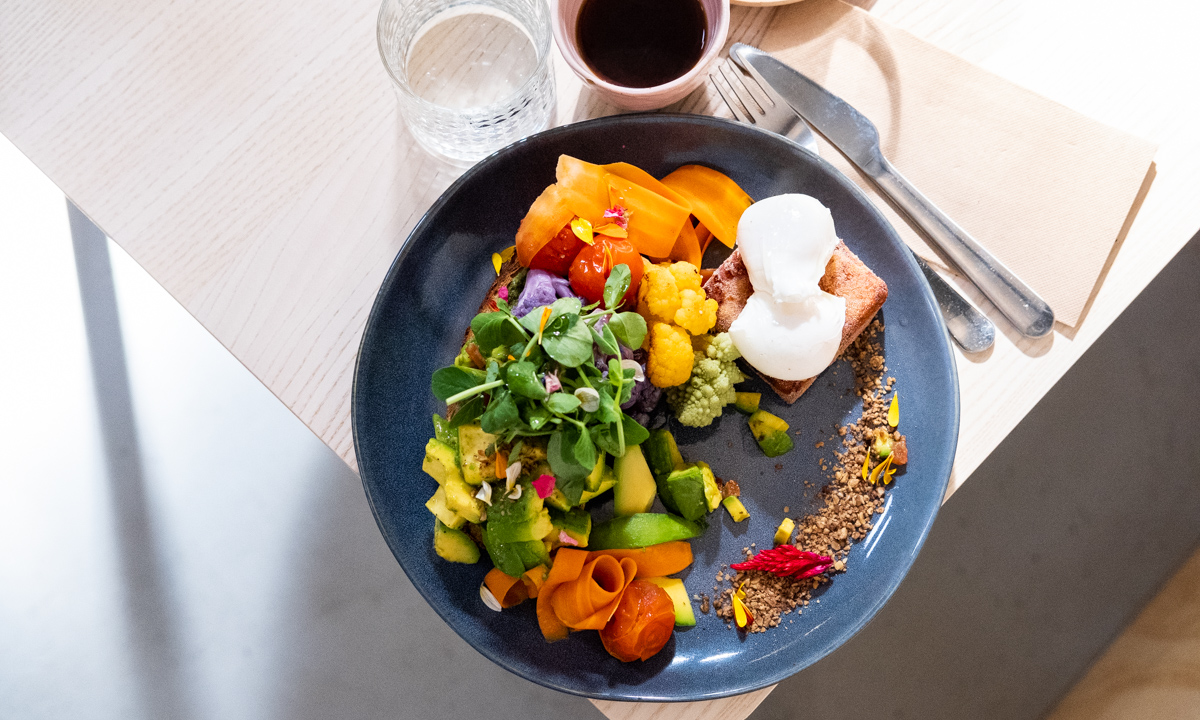 The café’s coffee program includes house blends and a rotating list of single origins, which change seasonally. There is also a range of Ninety Plus coffees on offer.

Customers who take home a packet of Coffee in Common roasted beans will notice the idiosyncratic illustrations and designs, which also come from Davide. 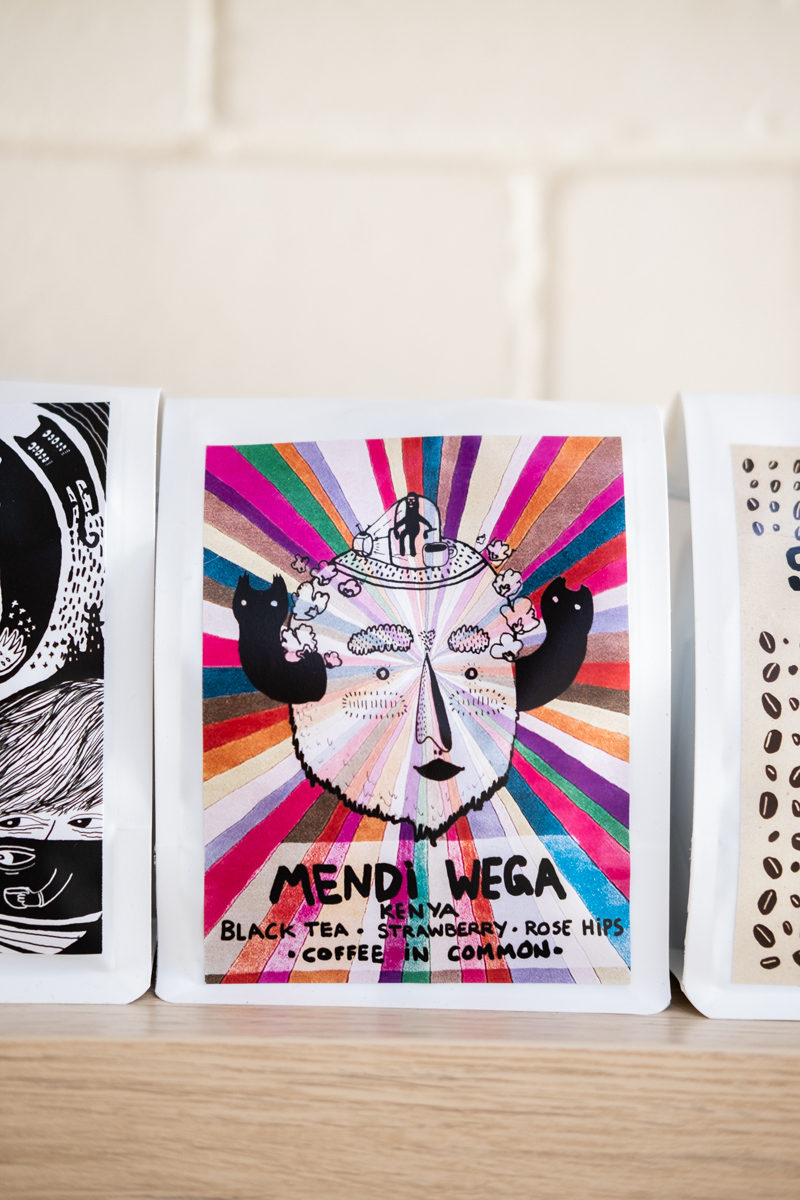 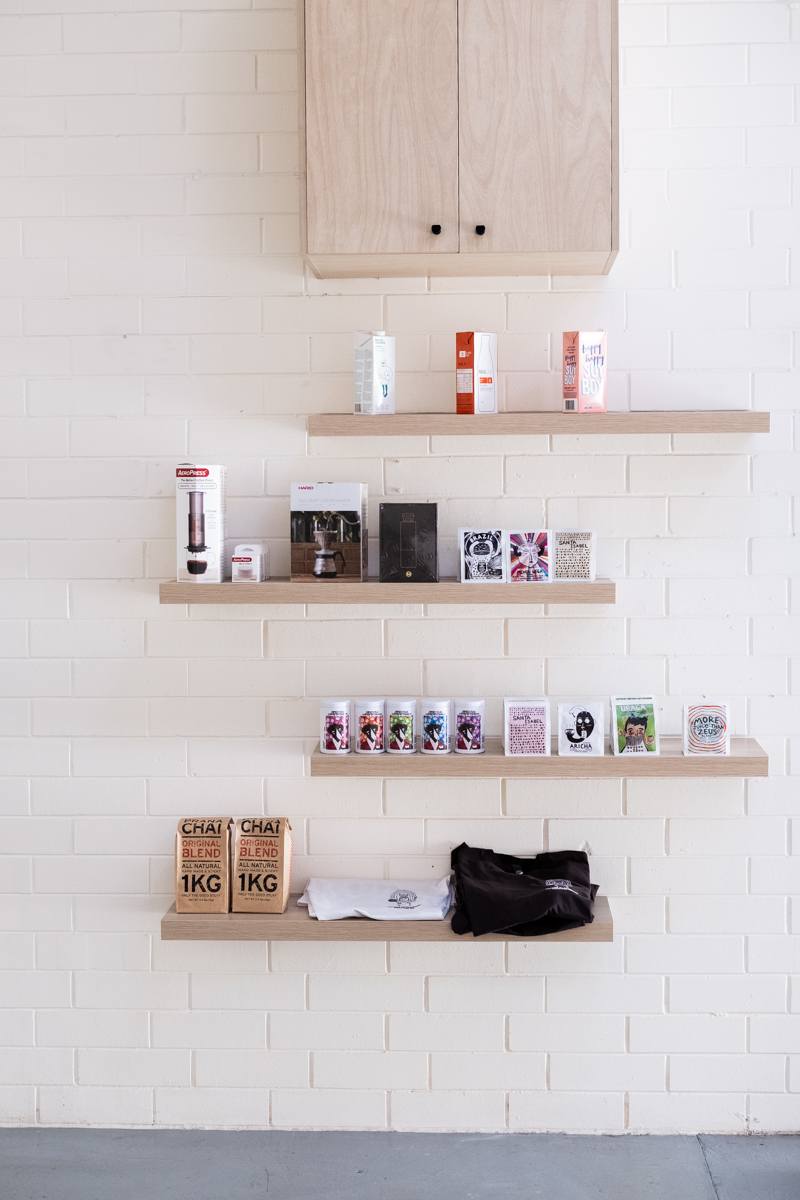 Coffee in Common has been warmly received by their Hindmarsh neighbours since opening, Davide says, and he hopes to see more people from around Adelaide come in and ask about the café and roastery’s products and process.

“We love talking about coffee to people, and I love it when people come up to us and talk about coffee and why we make certain decisions,” he says.

Coffee in Common is open from 7am ‘til 3pm Monday to Friday and 8am ‘til 3pm Saturday and Sunday. The kitchen closes at 2pm. 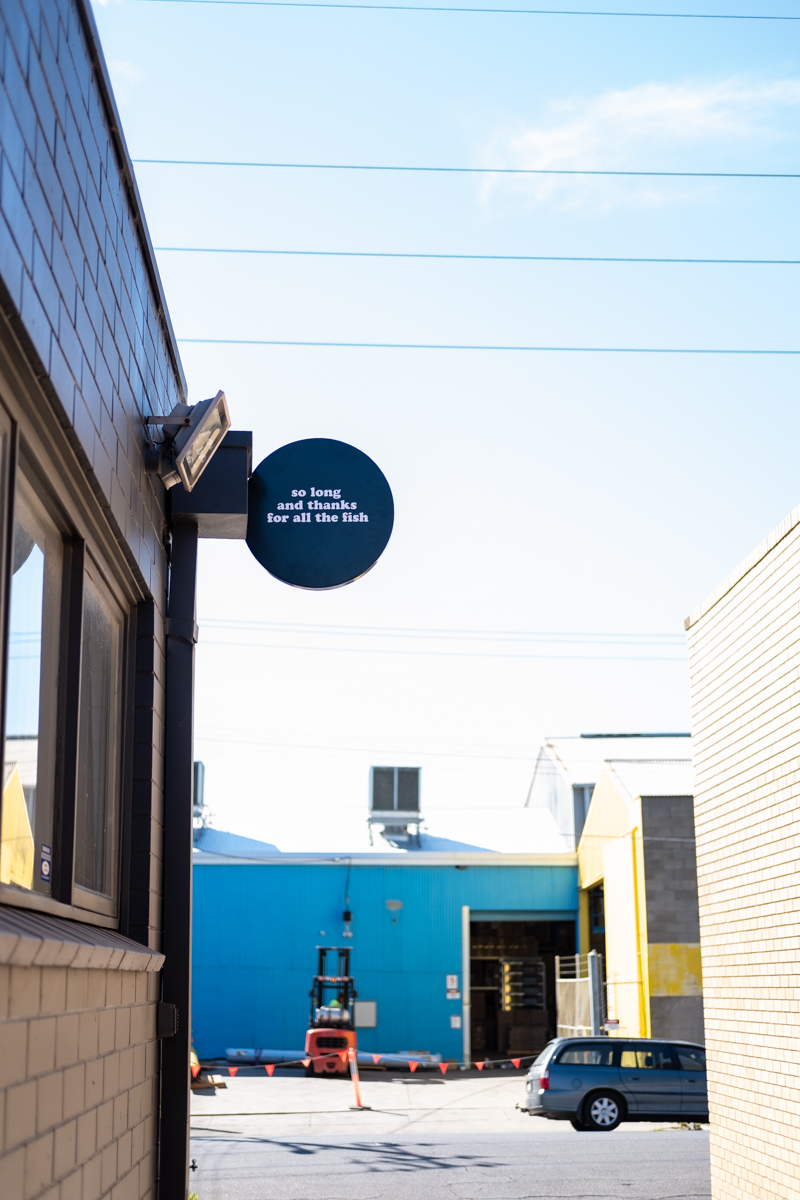