Introducing Gogi: Korean barbecue from the Plus 82 crew

In the earliest days of Plus 82 – the restaurant group behind Pocha, +82 Lite, and MiMi – Hyunwoo Kang and his business partners had their collective hearts set on introducing their take on Korean BBQ to the city.

For long-time followers of the space, this is indeed the same warehouse that Tooth & Nail first occupied before undergoing several iterations, the most recent being Mama Jumbo.

Pocha seemed a safer bet at the time, but not long after establishing the Korean street food restaurant, their regular clientele started asking for tips on where to go for good barbecue.

“[It] really helped us to build that confidence to go ‘Ok, Adelaide is ready for Korean barbecue,’” Plus 82 co-owner Steven Lee says.

By midway through last year, the collective had scouted a spot via Gumtree, the former Mama Jambo space on Eliza Street in the city’s west, and they set forth to bring Gogi (Korean for ‘meat’) into reality.

They brought in Terry Hwang, who had worked previously in the yakiniku section of Ginza in Unley, to work with Pocha head chef Janghoon Choi to help conceptualise the restaurant.

“I really wanted to open the true taste of Korean barbecue, because there’s not many in Adelaide,” Terry says.

“We are making it modernised for Australian people as well, so we have to make sure it’s not too spicy, not too overpowering with the taste.

“And it has to be a fun vibe as well, a good atmosphere, something interesting rather than too boring.” 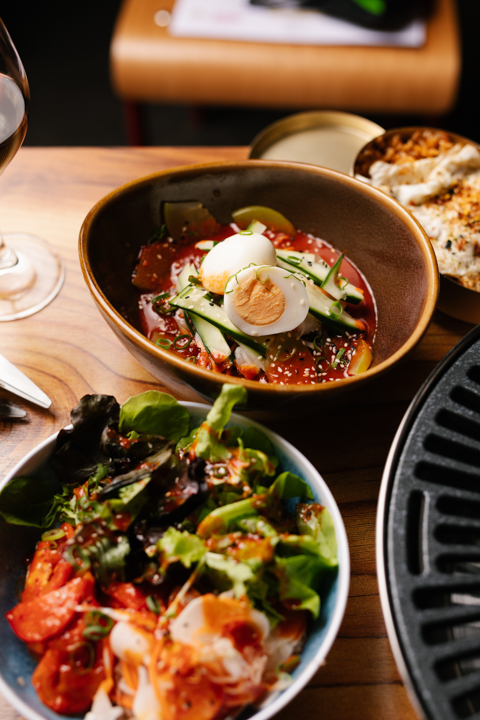 ‘Gogi’ means meat, but it’s not all meat.

Gogi’s opening was delayed slightly by the group’s advantageous takeover of East of Norman, now MiMi, but by mid-December 2018 the roller door was officially rolled up.

Steven was drawn to the space for its warehouse aesthetic, and so the fit out has been left spare, with minor details giving it the signature Plus 82 feel. Our attention is directed toward the barbecue tables – imported from Korea and designed to reduce smoke without the need for a hood.

The menu was a challenge for Janghoon Choi, who had to give consideration to his recipes and preparation methods to ensure every customer receives a similar experience, despite the variable of every table cooking their own food.

“It all depends on how they cook it – whether they undercook, overcook – so I have to try to cut the risk of the customer having a bad experience. That was really hard. I had to create a totally new recipe only for the grill, and then a la carte.” 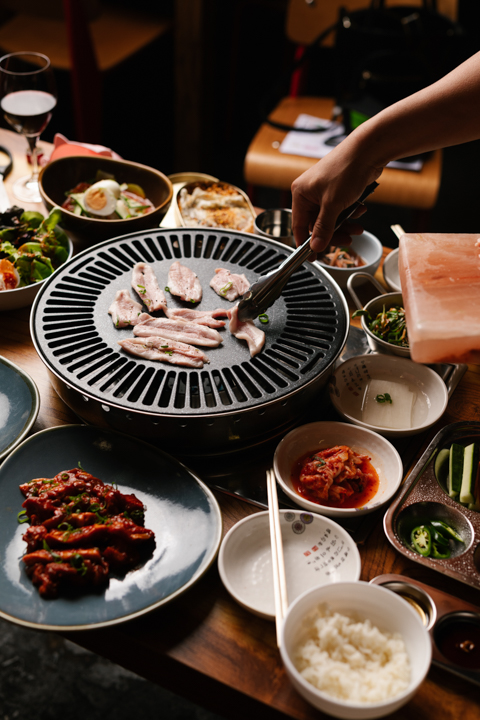 The challenge for the restaurant is garnering attention on a relatively little-used backstreet in the city’s centre-west; however, Steven isn’t concerned.

“[At] Pocha, location is important, but people tend to come visit now,” he says.

“That’s what we are working so hard to make sure with every new restaurant. We don’t want to let them down. We’re working very hard on that.”

Steven smiles coyly when we ask if Gogi will be the last Plus 82 project for the near future. Nothing is set in stone, but here on Eliza Street, as at Pocha, +82 Lite, and MiMi, Steven and his partners have proven their ability to respond to gaps in the market, and provide a strong point of difference and consistent brand identity.

“It’s challenging for us to have new restaurants,” he says. “People say we expand too fast, but we had the opportunity given to us, and we want to challenge ourselves as well.”