Introducing From Blammo: Louisiana-inspired hot sauces made during lockdown

With an abundance of time on his hands during the 2020 lockdown, Adelaide chef Justin Penman teamed up with his chilli supplier to found fermented hot sauce brand From Blammo.

Justin Penman greets CityMag with a selection of hand-made hot sauces – made during lockdown in 2020 – and a tall glass of milk. The beverage is a palate cleanser, he says, or in case the tasting goes awry.

From Blammo
Hot sauces made with lockdown love.

While dolloping sauce onto bread, Justin tell us he’s been a chef for 12 years and started his career as the owner of Pancakes at the Port in Port Adelaide. He then moved on to work in some of the East End’s most well-known haunts, such as NOLA, The Stag Public House, and now Roxie’s.

But when COVID-19 first hit South Australia in March last year, his kitchen career was put on hold.

“Within a few days I realised I was going to be bored,” Justin says, “so I got some chillies.”

From Blammo, Justin’s hot sauce business, is one man’s fix for an oversupply of local produce and time.

The newly-minted brand – the name a reference to The Ren & Stimpy Show – boasts six hot sauces, hand-made by Justin, which vary in intensity and in their ingredients.

“There’s a farmer, Kasim Erkoc [of K&R Produce] and he’s up in Murray Bridge, and he’s grown plenty of good produce and chillies, and I’ve always used him over the years,” Justin says.

“I got some chillies off of him, made a little batch, and then he was in a predicament where all the restaurants he’d supplied to were shut down. He basically said he’ll give me the chillies and I’ll make the sauce and we’ll work it together.”

Justin was first introduced to the world of hot sauces working in the kitchen of Vardon Avenue whiskey bar NOLA, which has a menu focussed on New Orleans-inspired food drenched in spice.

NOLA’s Louisiana hot sauce was Justin’s gateway hot sauce, he says, and inspired him to start making small batches at home with chillies of different varieties, including palatable green cayenne peppers to Carolina reapers. He then dabbled with introducing local produce and whatever was in season, from peaches to lemongrass.

“And then people start saying you should bottle it,” Justin says, “and once lockdown happened for COVID, and I was sitting home, [I] started making a few batches, and then thought more seriously about jarring it up and selling it.” 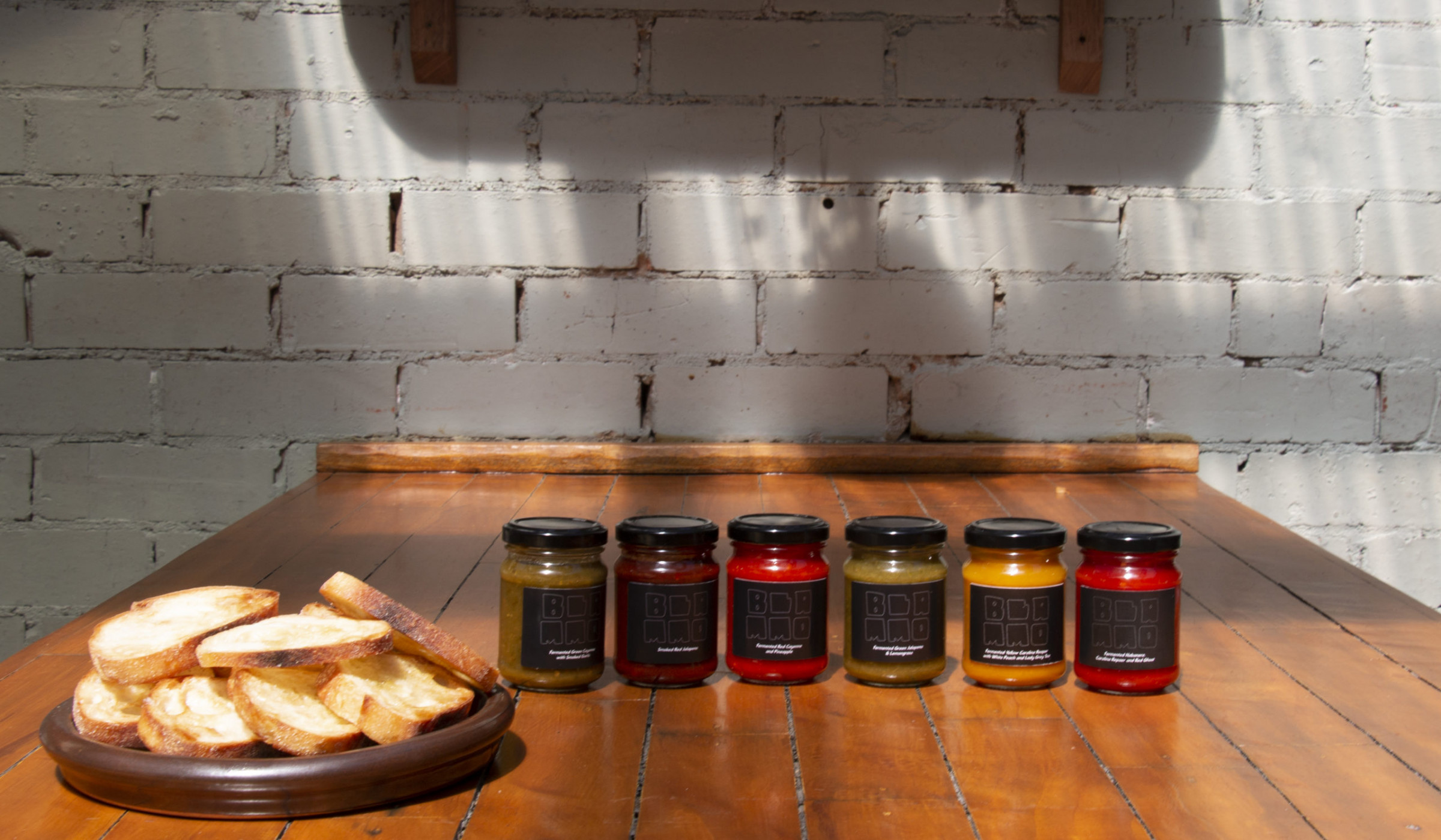 “My partner and I would both glove up and start taking the stems off while we’re watching Ozark in the lounge,” he says, laughing.

Once the green tops are removed, Justin and his partner then cut the body of the chillies into a smaller pieces so they can be fermented in vacuum-sealed bags.

The chillies sit in salt and other ingredients usually for two weeks or “however long it takes”.

Once the mixture is ripe, Justin cooks the chillies down so the water evaporates and he’s left with a paste.

Not all sauces have been made successfully, however, with Justin recalling one which went “really funky”.

“There’s a type of beer called Brett, or a type of yeast called [Brettanomyces], and it’s very winey, funky. One sauce kind of went that far,” Justin says. “It’s kind of interesting… but not.”

At the time of our interview, Justin has 2,000 jars of 150ml hot sauces. These were all from the March 2020 chilli-picking season, and the entrepreneur plans to make more condiments with the brand, exploring misos and other ferments.

Some of From Blammo’s sauces are being used on Roxie’s menu, and the range is also for sale online.

They sauces pair well with almost everything, Justin says, and some of the spicier numbers – such as the fermented red habanero sauce – will impress even those with a chilli death wish. Hence the milk.

“There’s been a few times when I’ve needed it,” Justin says, referring to the tall glass, which is now speckled with condensation.

“There was one time I got the chilli on my skin and I was getting a rash on my face.

“Apparently, vodka is good, for drinking and applying it to the skin. But today we have milk.”