Justin Healy’s bricks-and-mortar sequel to his popular ramen pop-up is now open and slinging bowls of hand-rolled noodles in broth, po’boys, and a short list of sides.

On Thursday last week, Dunfor Noodle Bar officially opened on Hindmarsh Square, in the space formerly occupied by The Deli on Pulteney.

Founder Justin Healy, who created the noodle soup restaurant based on his experience running the semi-regular ramen pop-up Quality Noods, says the initial response to his new venture has been overwhelming.

“[The weekend was] pretty busy. Like really busy. Didn’t expect to be as busy as it was, but it was nice,” he says.

“I hired out some trestle tables and we had the whole [outside area] full, like all the way down on Friday night and Saturday night and Sunday afternoon as well.”

The bar is yet to receive its liquor licence, but LOC Bottle Bar, which operates two doors down, extended its licence to cover Dunfor’s pergola space.

This is a relationship that will continue even after Dunfor’s licence is approved, with the restaurant keeping to a small booze offering.

“Working together was actually awesome,” Justin says of working with LOC’s Olivia Moore.

“It’s nice to work on stuff collaboratively, and I look forward to doing that with the rest of the building, because there’s so many other restaurants and venues, but also creative people upstairs, which I’m stoked about.”

Dunfor’s inaugural menu consists of two noodle bowls, one vegan and one meat-based. On the list of sides is a vegan potato salad, steak tartare, and a po’boy. The dessert option is kept simple, “just really seasonal fruit and custard”.

The meat-based noodle dish will be chicken for the first month of operation, but Justin, who, prior to founding Quality Noods and Dunfor, worked at former Rundle Street restaurant Orana and spent 12 months working for The Dairyman, will keep the menu seasonal.

“Working out how much we need to order and all of that type of stuff is going to take a month or so to really nail it down, but it’ll pretty much stay the same structure. I think I might add a third bowl, but it might just be a special to start,” he says. 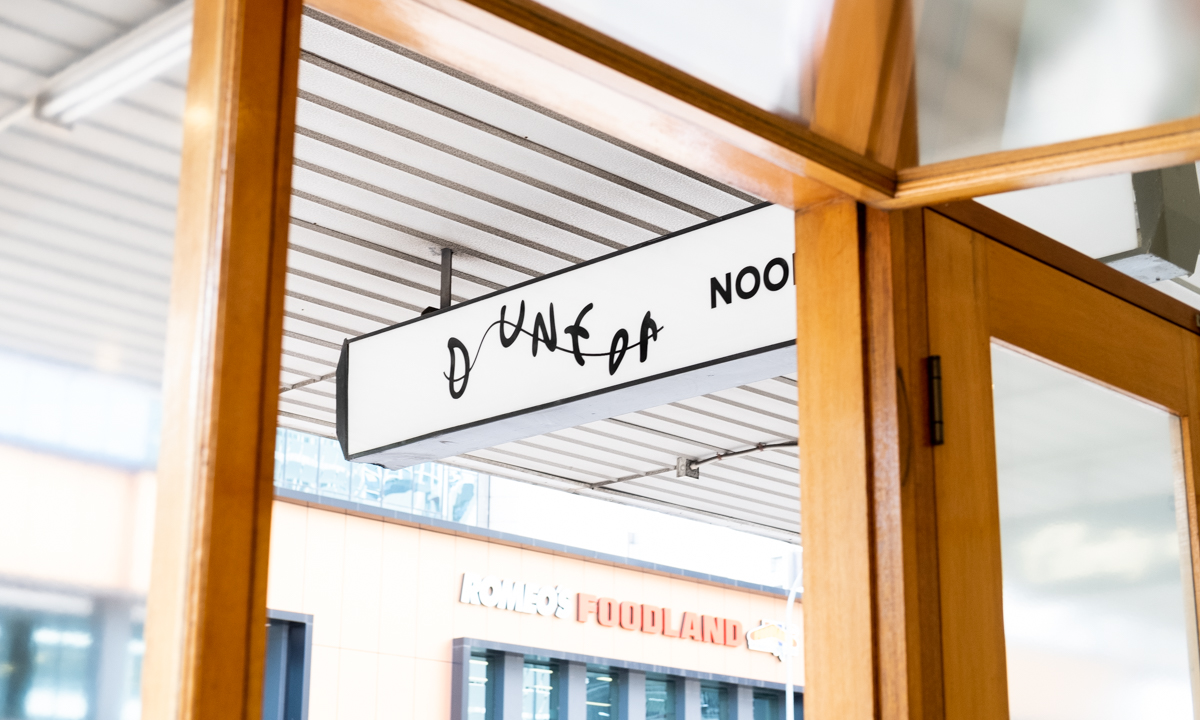 Heading into summer, Justin is also considering adding a cold noodle option, depending on demand.

“We’ll also have a liquor licence by then, so we’ll be able to have beers and things like that, so we won’t entirely be relying on slinging heaps of bowls,” Justin says.

Opening a physical restaurant was a long-term goal for Justin as he was operating his pop-up, and he’s already seeing the benefits to his business. Moving away from the pop-up model has meant the chef now has a small kitchen team to bounce ideas off.

“What’s been sick is having another cook in with me, and being able to be like, ‘What do you think about this?’ or ‘Wanna have a look at that and we’ll work it out’,” Justin says.

“I’ve really enjoyed seeing that part of cooking again, because I’ve been doing it solo for 18 months.”

Dunfor Noodle Bar is located at 62 Pulteney Street, on the north-eastern corner of Hindmarsh Square, and opens from 3pm ‘til late Wednesday through Sunday.