Opening this weekend, Golden Boy Cellar – the new venue underground at the corner of East and North Terrace – has been 18 years in the making.

“I can remember James [Hillier] talking to me about the basement space almost since the first time I met him,” says interior designer Claire Markwick-Smith.

Our first tour through the venue, however, is given by co-owner of Golden Boy, Sondra Deering. She points out the relief work on the walls, the all-brass backbar and the four giant slabs of Carrara marble that constitute the table in the 16-seat private dining room.

“You need to talk to Claire about the design,” says Sondra as we mosey through Golden Boy Cellar with her. “She’s really led a lot of the design down here.”

Claire Markwick-Smith may seem like a fresh face on Adelaide’s design scene, but the graduate of interior architecture has worked on a sizeable list of incredible projects here in Adelaide as well as interstate and overseas.

Golden Boy Cellar is Claire’s 17th project. The venue underneath the Botanic Building is significant for her because it was in this building (upstairs) that she first got her start as a designer.

“I was finishing an internship with Oli Scholz of Scholz Vinall who have their offices upstairs,” says Claire.

Architect Oli Scholz is a family friend of Claire’s and had agreed to take the undergrad on for work experience as part of her degree, but it was a chance meeting in the stairwell of the heritage building that led to a conversation with James Brown, then co-director of Mash Design, that eventually led her to Golden Boy’s Cellar.

“We got talking in the stairwell, we knew each other from – well – Adelaide and, when he found out I was interning with Oli, he asked me to come in and help out with some of the interior projects Mash was working on,” says Claire.

Claire was working as an interior designer at Mash for two years before she finished university.

“I was interning between Oli and Mash, working at the pub and studying full time for a year of that. I think I only just recovered from that,” says Claire laughing.

At the same time as Claire’s career was ramping up, downstairs in the same building Golden Boy was slowly swallowing it’s neighbouring venue Botanic Bar, which was ramping down.

“Golden Boy just kept growing,” says Sondra. It was 2014 and the Small Venue Licence was in full effect, and Botanic – once Adelaide’s most popular cocktail bar – was becoming less of a destination as new bars began to open across the city almost weekly.

“We saw the writing on the wall for us with the advent of small bars in the city and so we created Golden Boy as a sort of future-proofing idea, we just thought, ‘What food goes well with cocktails?’ and we went, ‘Thai!'” says Sondra.

Down the eight-or-so stairs from North Terrace leading into Golden Boy Cellar, you will feel as though you’re entering another era – some time in the past – though the exact decade will remain indiscernible.

“I love the 80s,” says Claire. She lists off another decade or two as favourites after that. The carpet underfoot was integral to soundproofing the basement space, Claire tells us.

A strip of cream-coloured wall encircles the cosy cellar between the top of the green leather booths and the low-set ceiling. The strip is adorned with sculptured cornice concrete in a relief pattern that reminds us of bamboo.

Claire tells us every detail of this wall was constructed by their painter, who cut and attached MDF to the walls and then sculpted the leaves and stems of the plant pattern by hand before rendering and painting the surface to finish. 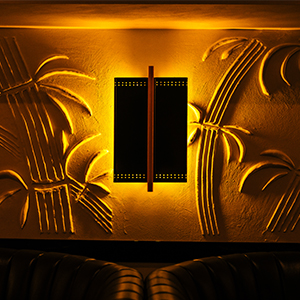 “When you don’t have windows, you’ve got to go full tilt,” says Claire, when we remark on the intricacy and low-key luxe atmosphere the relief work imbues on the place. And when we notice the mirror at the northern end of the bar is cut with the same pattern as the wall, we actually gasp when Claire nods to confirm the mirror was made custom for Golden Boy Cellar by an Adelaide craftsman.

UFO Agencies have flexed on this project in some incredibly subtle ways, like the cut-glass mirror, the black granite table tops, which juxtapose the white marble tables upstairs and custom-designed wall sconce, which itself references an earlier design the team created for Botanic upstairs.

A lot less subtle is the 16-seat private dining room featuring four giant slabs of marble joined by a brass runner and imposing Nico Krijno artworks lining the walls. Our photographer has set up in this room to photograph Claire for the story. There are stools shrouded in plastic – both she and the photographer like them like that.

“That’s the Zoe chair,” says Claire hoiking up the protective plastic sleeve to reveal the stool underneath. The chair looks like something you might have plonked down on at AMF Bowls in your childhood, but given its context against the expensive marble and glinting brass banding, its fire-engine red and blue colourway elevates the stool to something akin to art. UFO Agencies also designed the chair.

“When we first saw them [the stools] we thought, ‘We’ve got to change them!’ And now, in the evening, we love them.

“I think there’s a dagginess we strive for at UFO,” says Claire. “Individually – or out of context – you might look at some of our decisions and our pieces and think they’re ugly, but together they create something altogether unique and beautiful.

“It is a bit daunting though with a project like this, and interior design in general. All your decisions are on a stage. And really the picture isn’t complete until the bar opens. We imagine our spaces with people in them and food on the table, drinks in hand, and how they’ll be engaging with and in the space.”

So get down those steps this weekend and secure a cosy booth in the corner. Order from Adelaide’s most popular restaurant upstairs and sink Mai Tais while you soak up the glint and low-key glamour of Golden Boy Cellar – Adelaide’s daggiest small bar.

This story has been updated.

Sign-up to have CityMag’s stories sent straight to your inbox once a week. It helps us a lot if you do!