Korean fried chicken, beer and a "K-pop aesthetic" - Ban Ban on Franklin Street is a unique Adelaide offering of both food and design.

Ban Ban is located at 145 Franklin Street, and its soft launch is happening from 5pm on Wednesday, 18 July.

The restaurant will operate:

Paved in pale blue tiles and lined with pastel pink tableware, the space channels “a K-pop minimalism kind of aesthetic,” says Ryan Genesin of design firm Genesin Studio. “So just keeping it simple, and fun, and tangible, and familiar, all these things.

“The food’s quite fun and colourful, and I think that’s the joy of it, is that the food sings, and we’re kind of platforming the food and creating a space to display it.”

The concept comes from the minds of Ernest Koong and Darren Song, who started their hospitality careers two years ago as St Louis franchisees on O’Connell Street, and noticed a distinct lack of chimaek available throughout the city.

“There’s not that many places with fried chicken and beer to begin with,” Darren says.

“I think it’s a good combo. There’s also the atmosphere of a gathering place. It’s very common in Korea where they go to places like this and have beer and chicken. We’re trying to give customers a similar experience.”

The space is separated into seating at the bar, low tables for couples and small groups, and a tall share table for large groups and individuals willing to share space. The venue aims to strike between a casual and fast food approach, catering for diners in both realms, and so the design accommodates for varied use.

“There’s a very social side to it and a very private side to it,” Ryan explains.

Once Ban Ban is properly introduced to the Adelaide market, it is Darren and Ernest’s hope that they can expand the concept into multiple stores and formats, throughout Adelaide and further afield.

This goal was included in the brief given to Ryan and Carlo Jensen of Peculiar Familia when focussing on the materials and the direction of Ban Ban’s branding. 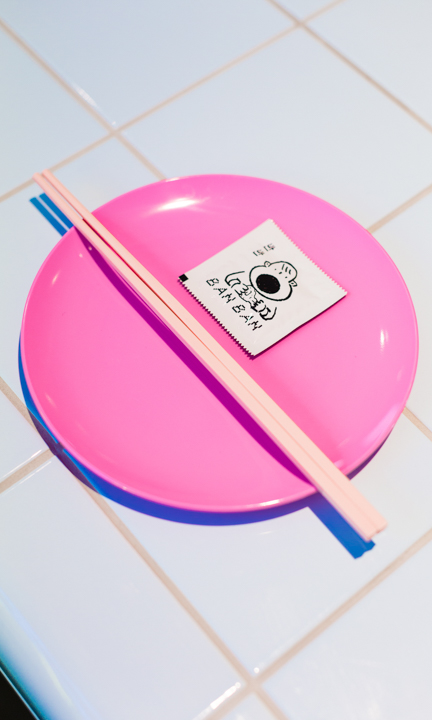 A Ban Ban wipe packet, featuring the illustrated boy. CityMag asked if the boy had a name. “Ban,” Ernest replied.

“[We wanted] something that was playful and catchy. Something people will remember. If you look at the boy, you’ll remember us, sort of thing,” Darren says.

“Darren engaged Carlo and myself,” Ryan continues, “and we were more so throwing ideas at each other.

“We felt the grid was quite important with branding, and also the looseness and playfulness, and so they’ve all had a honing process of getting to where they need to be.

“Carlo’s got an illustrator to do illustrations of the boy. It’s a lo-tech approach to it all, so it’s been quite fun and not overdoing it.

As for the menu, the chicken is the main event – available to be accompanied with hot and crunchy, sweet and spicy, soy garlic, or “secret” sauces, and designed to be shared at $30-$32 per serve – but there is also a small selection of Korean-inspired main meals – kimchi pancakes, fishcake soup, kimchi stew, and more.

“For the light snacks and the starters, it’s more of Korean street food,” Ernest explains, “like the mini rice cake skewers and the Spam fries”

In the alcohol realm, Coopers Pale and Session Ales are sat against a selection of beer from across Asia – Sapporo, Hite, Cass, Singha, Chang, Tsingtao, Hanoi – perfect for pairing with the KFC on offer. But if you’re on a harder tip, Ban Ban also offers a selection of soju and makgeolli (Korean rice wine), which can be ordered straight, or in cocktail format – the sokult option is the most intriguing, a soju and Yakult combination.

Franklin Street and its surrounding centre-west neighbourhood is perhaps the area least colonised by the recent avalanche of Adelaide new bars and eateries, but there’s plenty in the area to trade off of, with their proximity to the Central Market being a deliberate decision, and they hope to also capture some of the foot traffic moving between the south and Adelaide Oval.

If all goes according to plan, they hope to trigger a wave of similar venues along Franklin.

“The area itself is growing without us, we’re sort of piggybacking,” Darren says.

“There’s more areas around us that will be much better for us, because it will bring more traffic over here. It’s like Peel Street; it started with one bar, or one restaurant, and then it started to grow.”