A new identity and direction for Clutch at Henley Beach

At the beginning of the year, Elisa Mercurio was thinking of the future of her business, the Henley Beach eatery Acacia, trying to decide whether the time was right to open a new shop.

Acacia launched three years ago, and was predominantly known to its loyal clientele as an excellent brunch spot.

Six months in, Acacia moved into night trade, which was always part of the plan, but was delayed while waiting for liquor licence approval. In that time, though, the idea of Acacia as a café calcified in the minds of the Adelaide brunch set.

Because of this, take up for dinner service was slow.

“It was long and there were a lot of quiet nights to begin with, but then the quality of food pushed it through,” she tells CityMag.

Elisa had founded Acacia to “do something that was a little bit upmarket in the breakfast area,” which she and head chef Duane Tilka had certainly succeeded at. But she could feel her attention shifting towards the dinner menus.

“It just got to the point where we had reached the limit with breakfast, in terms of creativity, and there’s only so far you can push it,” Elisa says.

“Sometimes the more creative you try to be with breakfast, the less people are attracted to it,” Duane agrees. “People kind of want what they want for breakfast, which is fine.

“A few of our dishes definitely allowed me to play around, but you still get a lot of the general bacon and egg crowd – which is fine, that’s what a lot of people come here for. We just try to do it as well as we can as well, making all our bread and stuff from scratch and all of that kind of thing.” 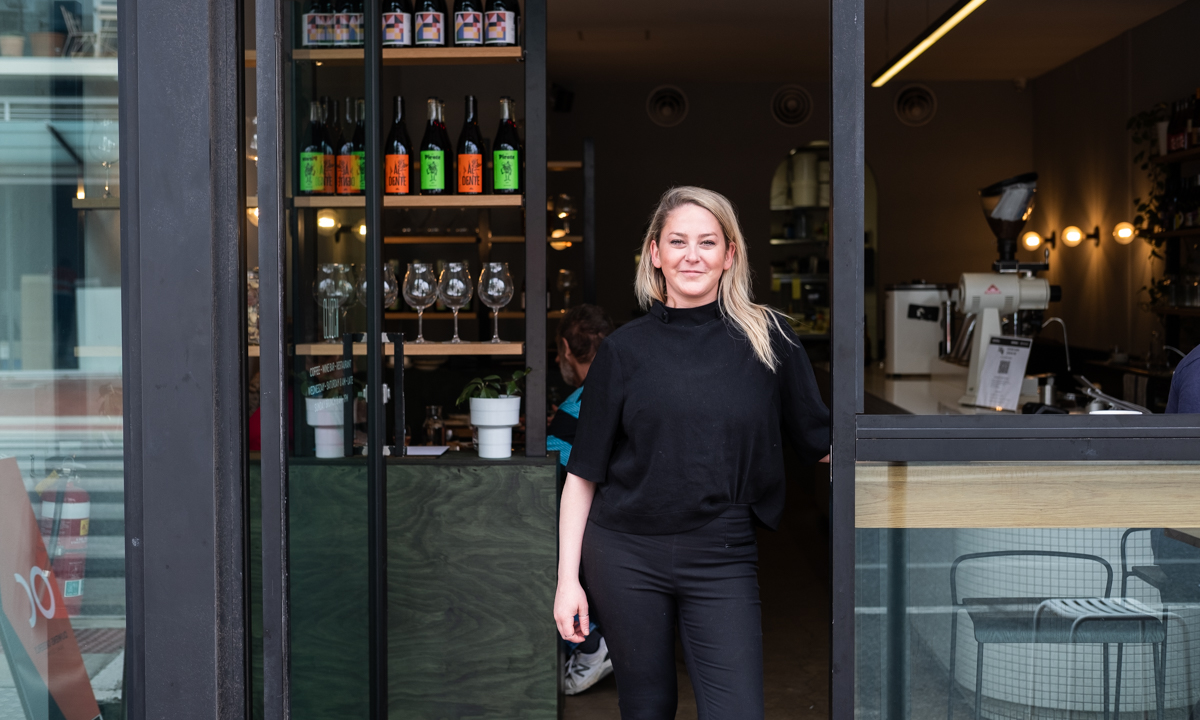 Recognising the talents of Duane and Acacia’s manager, Henri Lemos, who has a history in wine, Elisa wanted to make the leap into nighttime service and open a restaurant and wine bar. She had even gone so far as to scout new spaces to lease.

But as she looked back on Acacia’s short history, she saw the business had been in the slow process of metamorphosis for its entire life.

Not only was Duane pushing creativity in the food offering, Elisa had also launched a sister online wine store called Clutch, which drew from Henri’s extensive wine knowledge.

These were the requisite components of the kind of restaurant and wine bar she hoped to open, already operating within her venue, though somewhat independently. All she needed to do was bring them together.

She ran the idea of a venue rebrand by Duane and Henri, which turned out to be an easy sell.

“That was about a five-minute conversation between the three of us. We were like, ‘Alright, let’s just do it.’” She smiles. 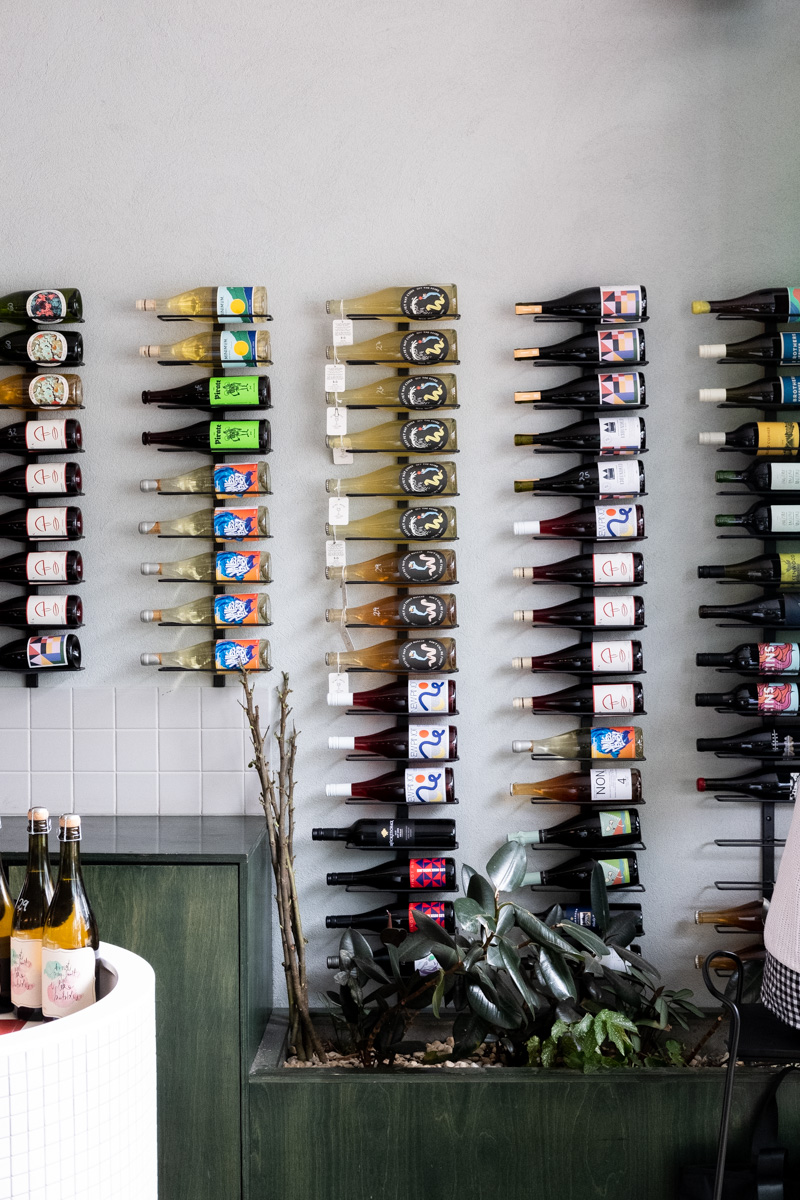 At the end of September, Elisa relaunched the space as Clutch Restaurant, merging identities with the online bottle shop.

Where once Duane may have been limited by the narrow expectations of a plate of scrambled eggs, on the inaugural Clutch menu he is unchained.

His penchant for fermentation is visible in many of the dishes, but most inventively in the ‘carrot ham’, which is a deliciously smoky example of his ‘vegetable charcuterie’ and a close approximation of biting into a thick slice of jamon.

The kangaroo fillet is sliced and topped with lime, nori, and a Korean chilli, in an unexpectedly coherent combination of flavours; the liver parfait is paired with persimmon mustard and hoshigaki (persimmon dried in a Japanese style); and even the ever-present kingfish gets a slight textural tweak in Duane’s ‘pastrami’ version (though it is still as safe a starter choice as ever). 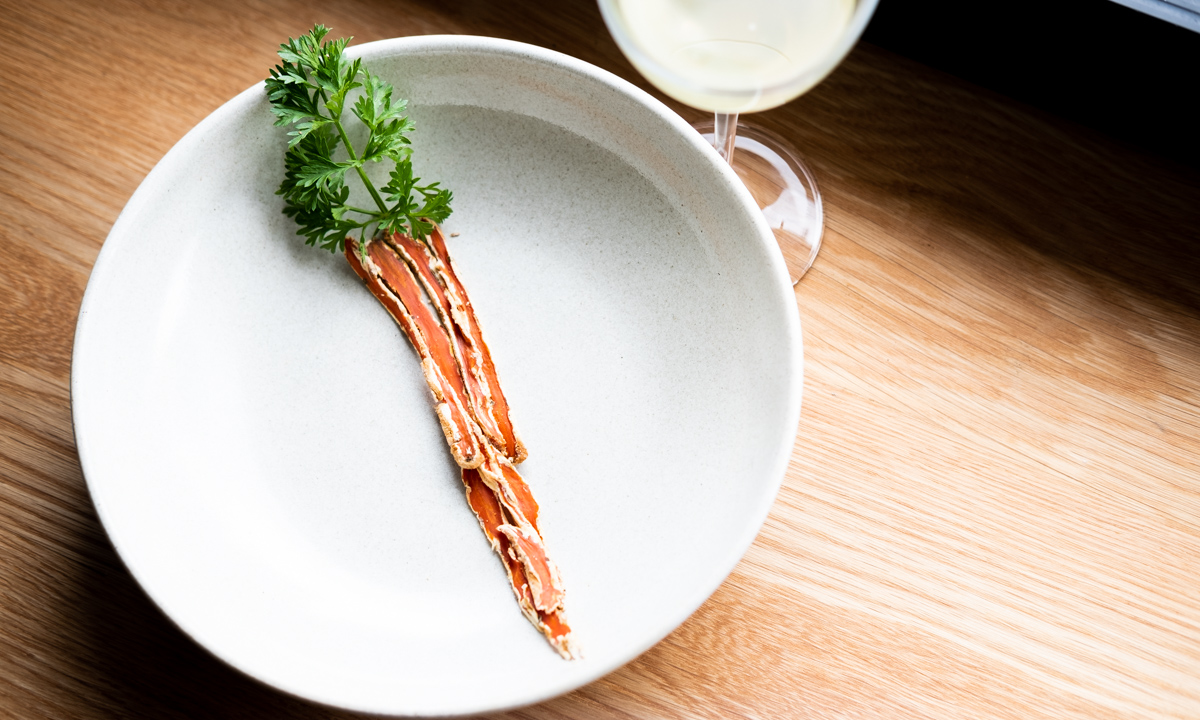 ‘Carrot ham’ is better than it sounds

In addition to being a chef, Duane is also a keen homebrewer, and this passion is evident in one of the menu’s two desserts.

The Galaxy Ice Cream is made from cream which has been steeped with Galaxy hops over a few days. The dish is topped with a malt vinegar curd, made from one of Duane’s homebrewed IPAs, and a praline made from the spent grains of said homebrew. 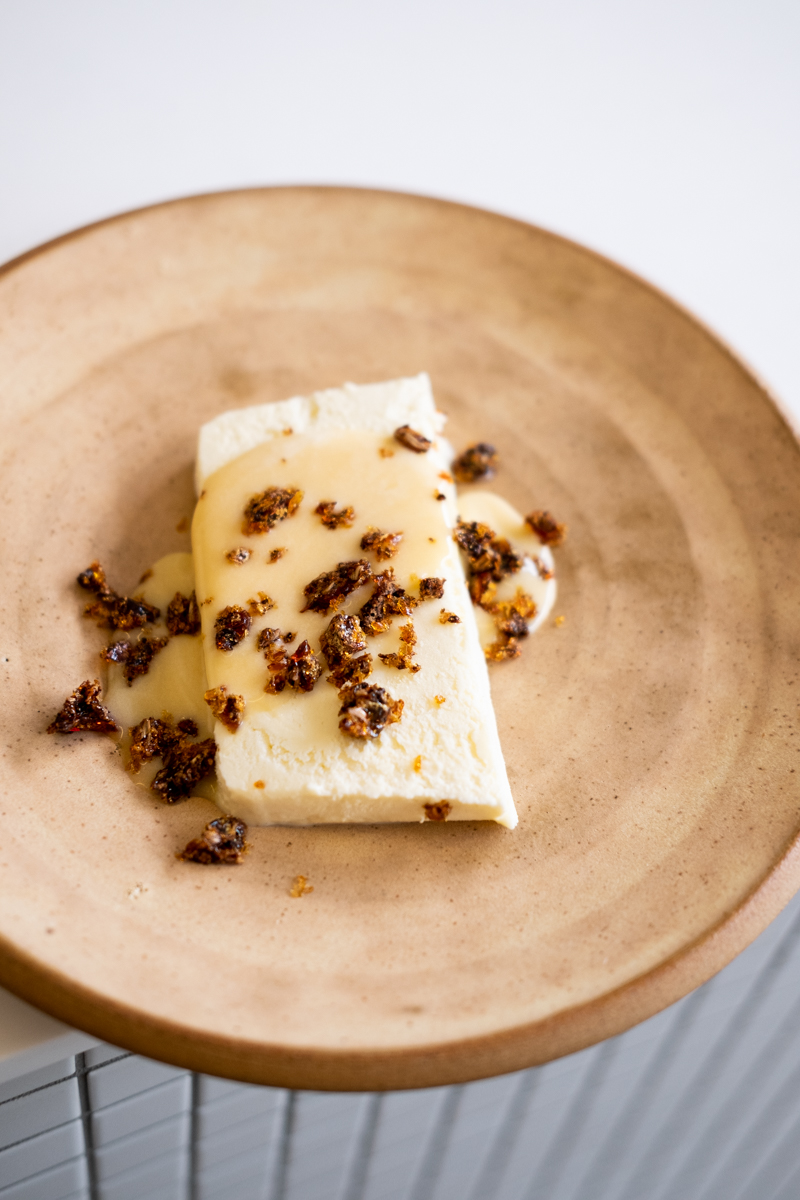 In every dish, there is depth to explore and surprise to be found.

“I’m a big believer in if you do something well you can do it anywhere and attract the right people,” Duane says.

“I think what we’re offering is a little bit left-field of what the average restaurant around here is doing, so it allows us to attract a different market.

“There’s definitely still room for us to grow, and hopefully we can do some more exciting things down the track, and I think the menu’s been pretty well received so far, so the more I can keep pushing with that, the more people will be interested to come and try what we’re doing.” 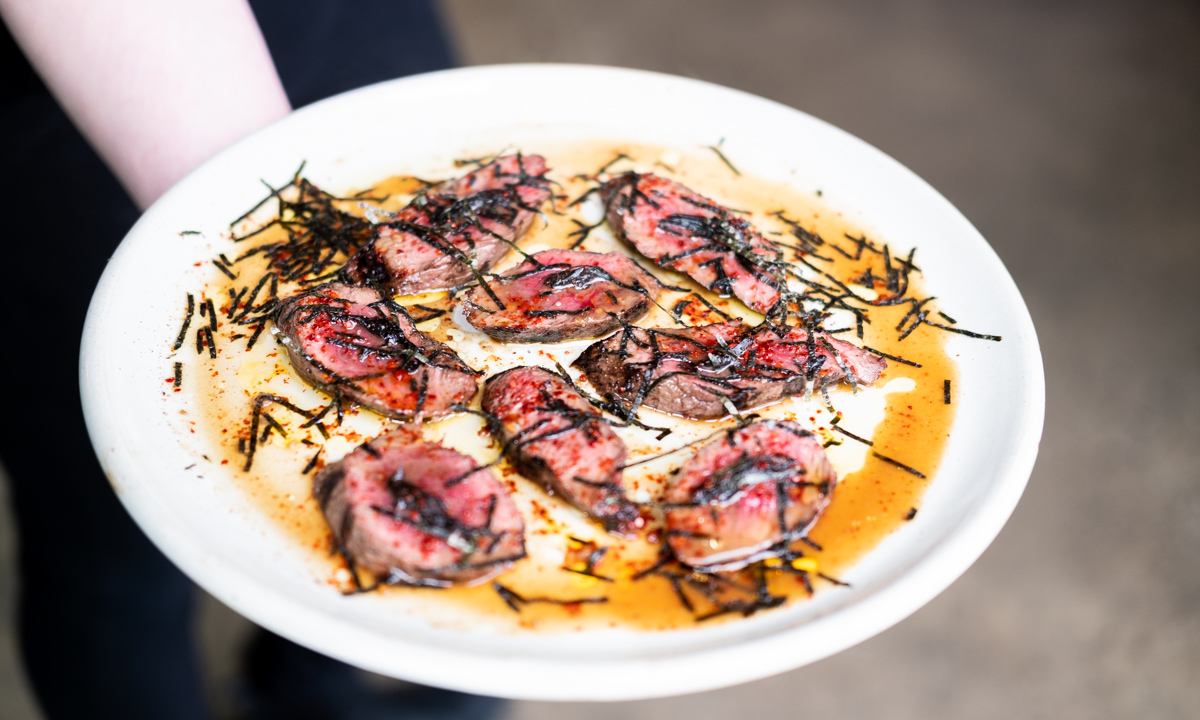 Elisa has also witnessed a positive response to Clutch from her existing clientele – including some of the café crowd.

“What I’ve seen so far is people come in for a coffee and then they don’t leave until 6pm,” she says. “They start on coffee and they end up drinking and eating and staying and drinking a little bit more.”

Clutch opens from 8am ‘til late Wednesday through Saturday, and 8am ‘til 1pm Sundays. 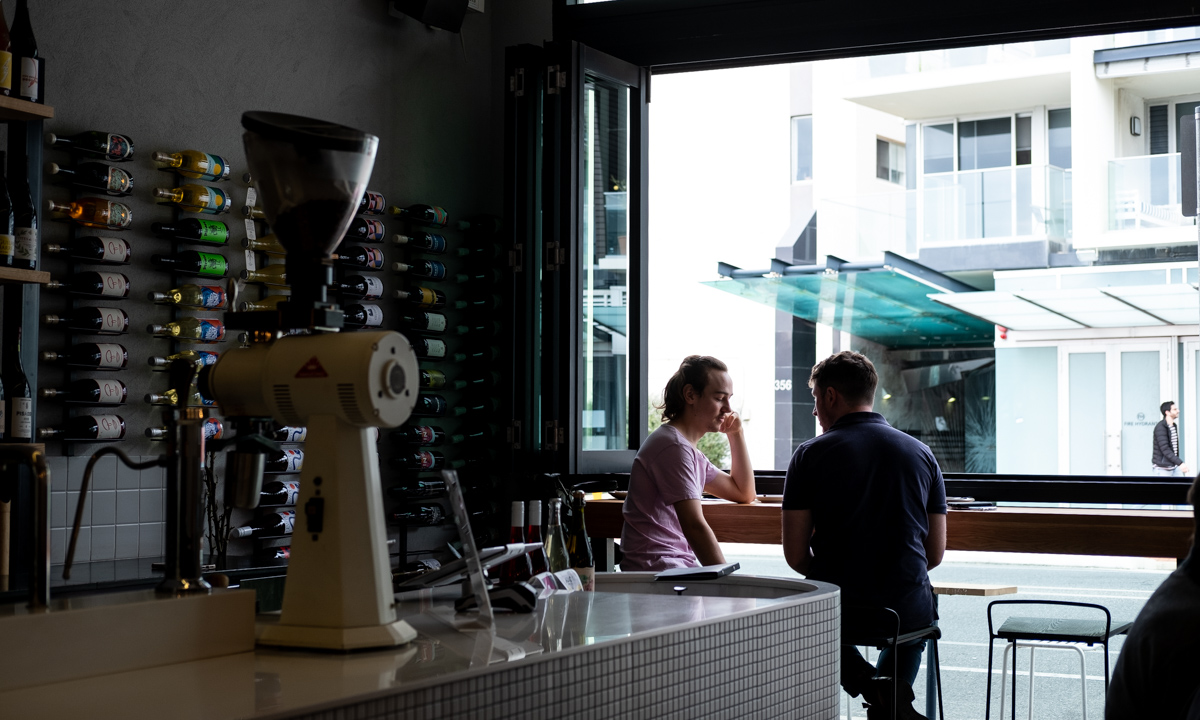