The $6 million redevelopment of the Adelaide Railway Station's long forgotten hospitality offering, completed by Studio Gram and Uppercase Studio, shows the transformative power of progressing with an eye to the past. 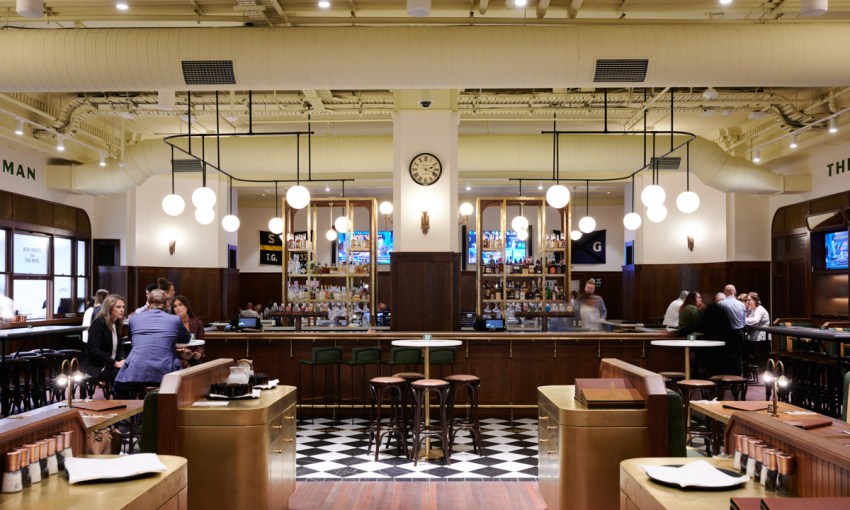 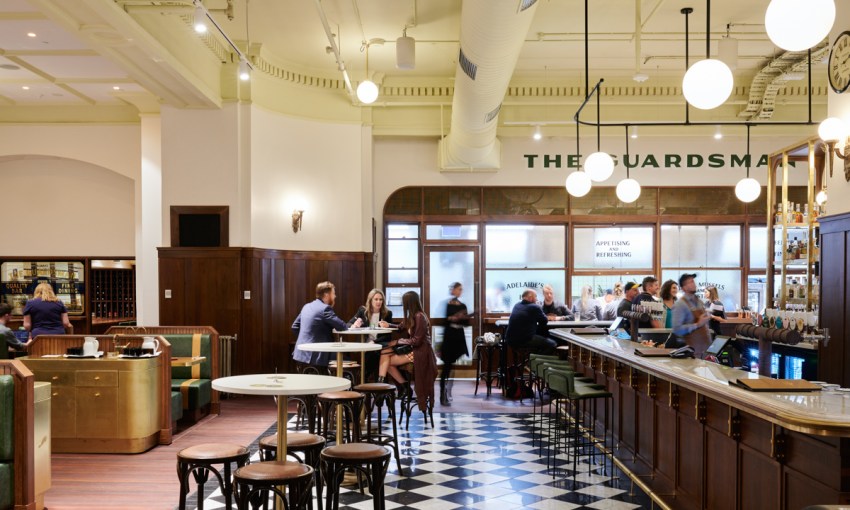 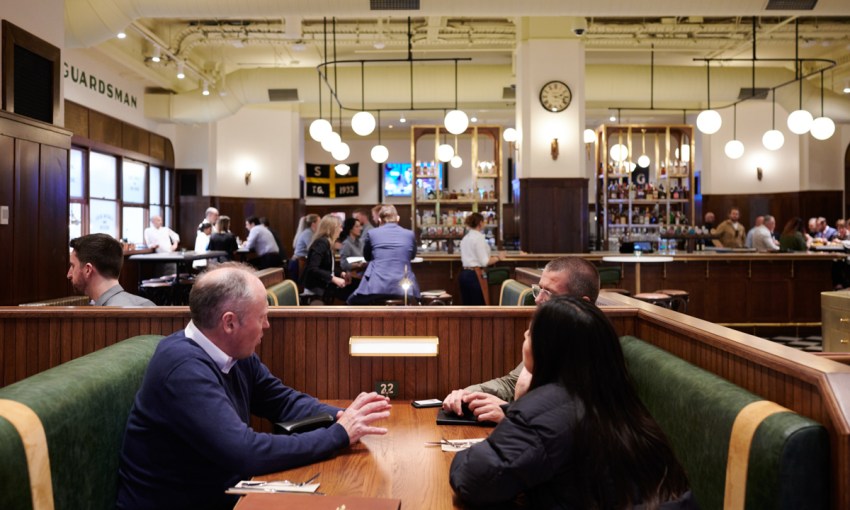 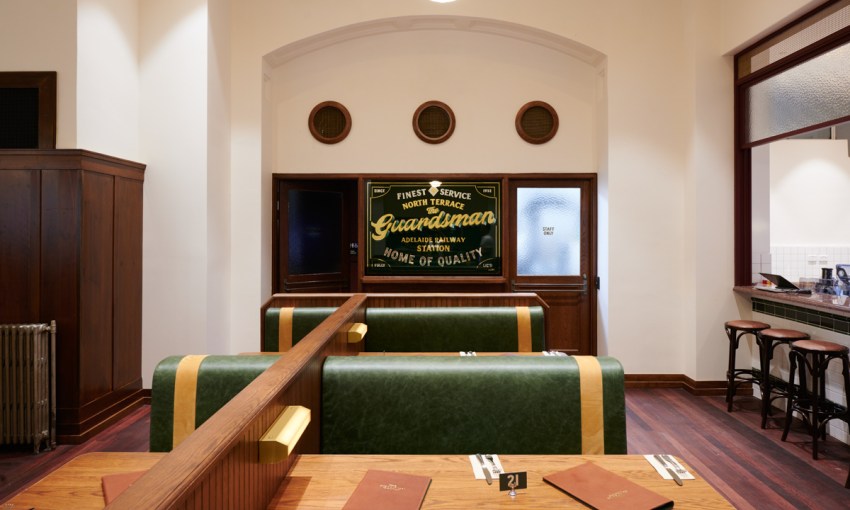 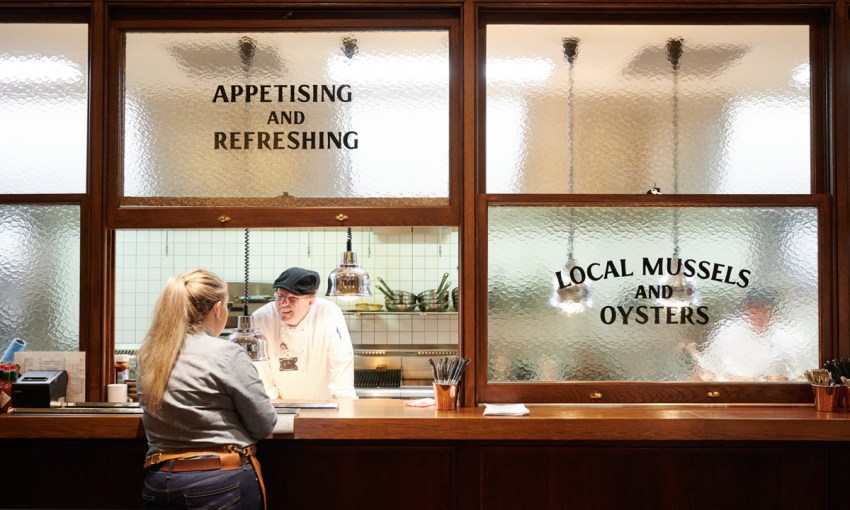 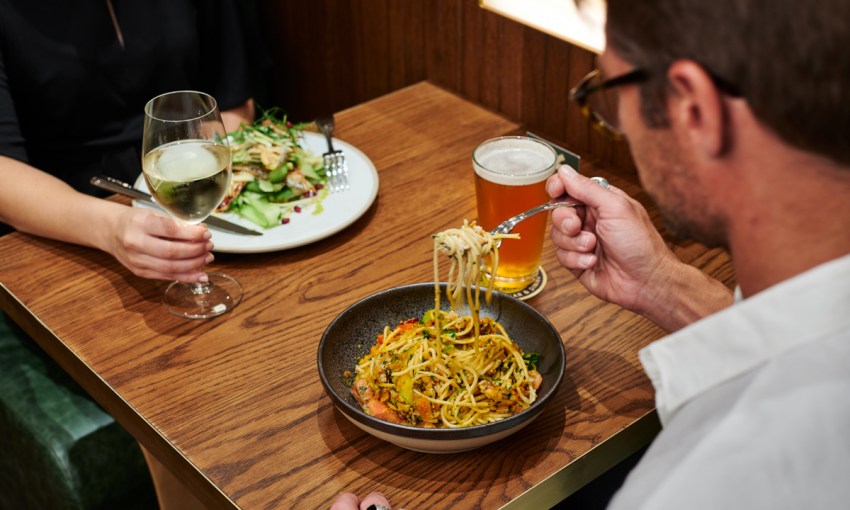 The day before the first day of trade at SkyCity Adelaide’s newest venue, The Guardsman, the dining hall is bustling.

The Guardsman
Adelaide Railway Station, 125 North Terrace, Adelaide 5000
Mon-Fri: 6am ’til late
Sat-Sun: 11am ’til late

Staff and friends of the venue sit in the cushioned booths and tall benches, testing the menu, while photographers from various publications flit around the space searching for a unique perspective of Studio Gram and Uppercase Studio’s design.

Dave Bickmore and Olivier Martin from Gram and Tristan Kerr from Uppercase wander from corner to corner with an equally fastidious eye – one last look before Adelaide is welcomed into the space.

CityMag catches head chef Luke Brabin cutting across the room towards the kitchen. SkyCity’s communications manager, Rosie King, taps him on the shoulder for a chat but warns us to be gentle – the chef has had little opportunity to sleep in the last few days.

After spending a decade cheffing outside of South Australia, first in Melbourne then across Asia, Luke was drawn back to SA by SkyCity.

“I wanted to get into a big organisation that had a bit going on, and they certainly do,” he says.

The Guardsman is just one piece of the broader Adelaide Casino development, but it’s an integral piece of the precinct’s masterplan. The venue connects the Casino with the Adelaide Railway Station, creating a hospitality honeypot for daily commuters.

The hope is to also draw clientele from the increasing number of punters passing through the area for sports, arts and community events along the Riverbank.

Given the site’s historical significance to South Australia, Luke has gone to great lengths to showcase the state throughout his menu. 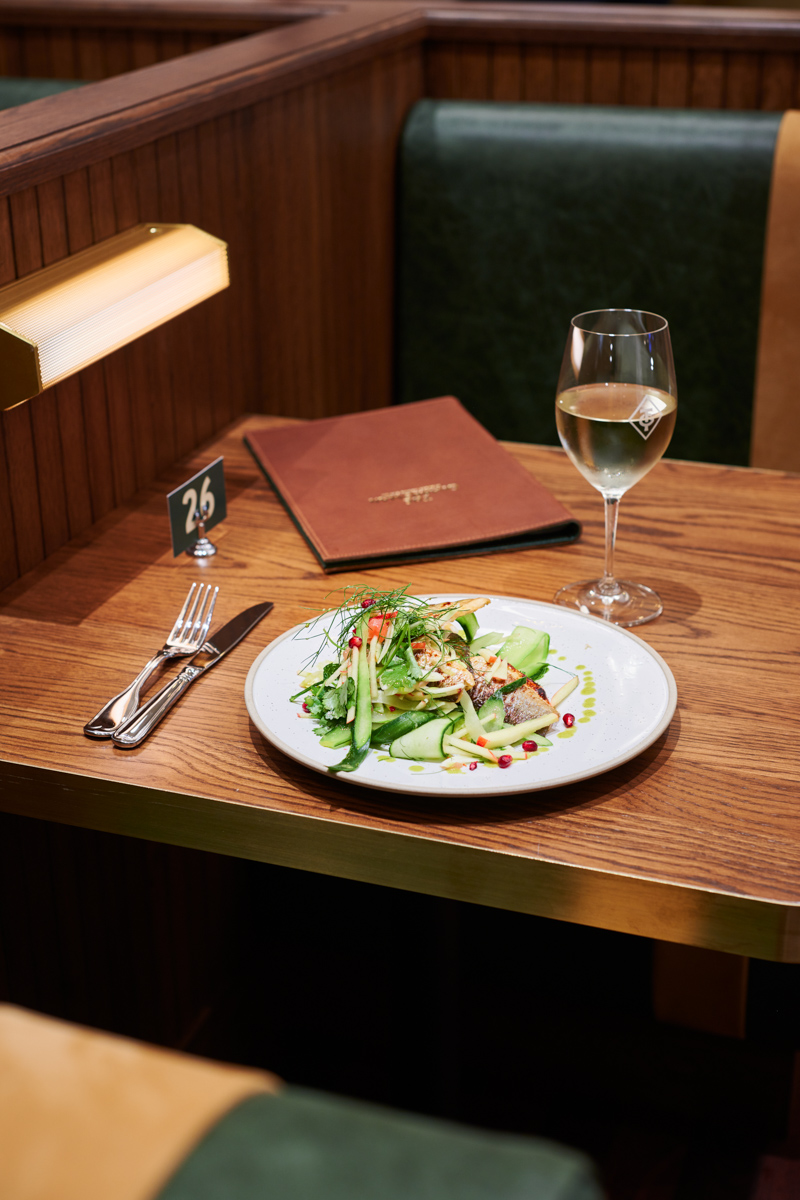 Every beer on pour at The Guardsman is from SA, as is the entirety of the wine list and a significant proportion of the spirits.

“I just wanted to celebrate everything, really, and in a simple way, unpretentious, but refined,” Luke says.

The Guardsman aims to be broadly accessible, and the restaurant’s price point reflects this: sides hover mostly between $15-$20, mains from $20-$30 and larger share plates sit at around $50 (the kids menu is capped at $10 per item and every order comes with a free Golden North ice cream).

The execution is also for the masses; Luke has a background in fine dining, but more recently he has pursued ‘unpretentious but refined’ pub-style fare.

“A lot of pubs still do the same old stuff, and I wanted to do something a bit different, elevate it,” he says.

“You’ll see a lot of my travels in the food – there’s a fair bit of Vietnamese, Chinese, Indian influences, so it’s an interesting menu.” 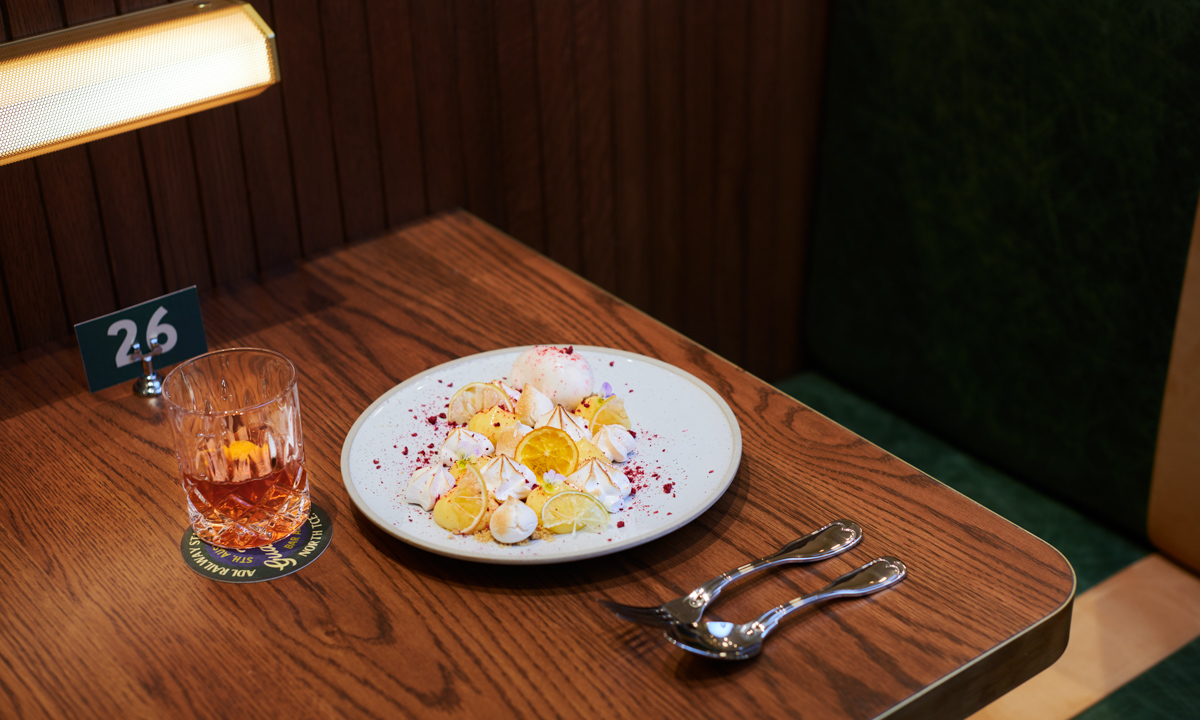 A small room adjacent to the main dining space accommodates intimate wine tastings and producer show-and-taste events. (And there are beer-tasting paddles on offer, too.)

SkyCity Adelaide’s general manager of marketing, Greg Stirling, says part of the idea behind the South Australian focus is to offer somewhere for tourists to experience the best of the state, but primarily The Guardsman exists for Adelaideans.

“I think that’s great for the city, to have more venues where you can have somewhere that tourists are going to come in,” Greg says.

“But I think the vast majority is the commuters into the Railway Station. And for people after work looking for somewhere to have a break, meet their friends and have a beautiful glass of wine and maybe stay for a meal.”

The Guardsman opens from 6am on weekdays to catch the first trains, so coffee service has been built into the front of the venue, facing into the Railway Station’s concourse.

The placement of the café (which serves up Rio Coffee) is partly for commuters’ convenience, but it was also a deliberate design decision to allow people to more easily have their first encounter with the venue – without needing to step through the replica heritage doors. 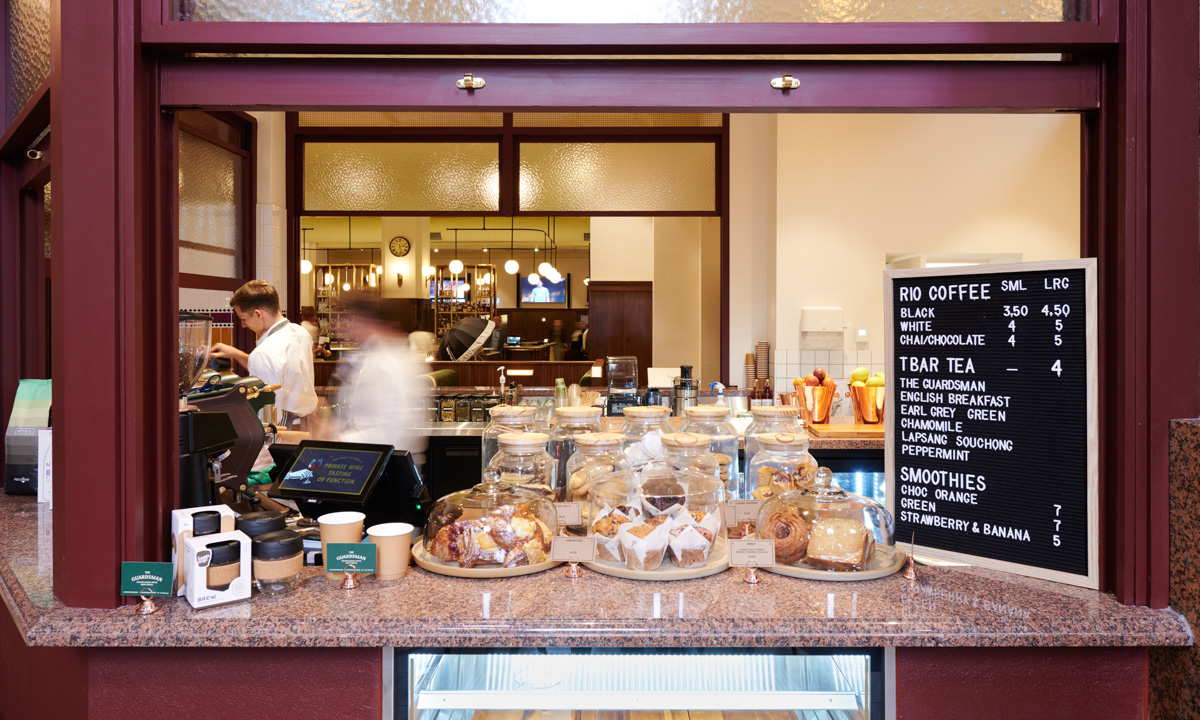 The entire project has been three years in the making. Studio Gram and Uppercase Studio have been part of the project since its earliest stages.

Gram dug deep into the history of the building – designed and built in the 1920s – using original plans to get an idea of how much space they actually had to play with.

The space they first walked into was “a bit of a SkyCity storeroom,” says Studio Gram’s Olivier Martin.

“It was partitions, it was site offices, it was red, ugly, stained carpet.”

“There were a number of spaces where we didn’t know what we were going to find,” Dave Bickmore continues. 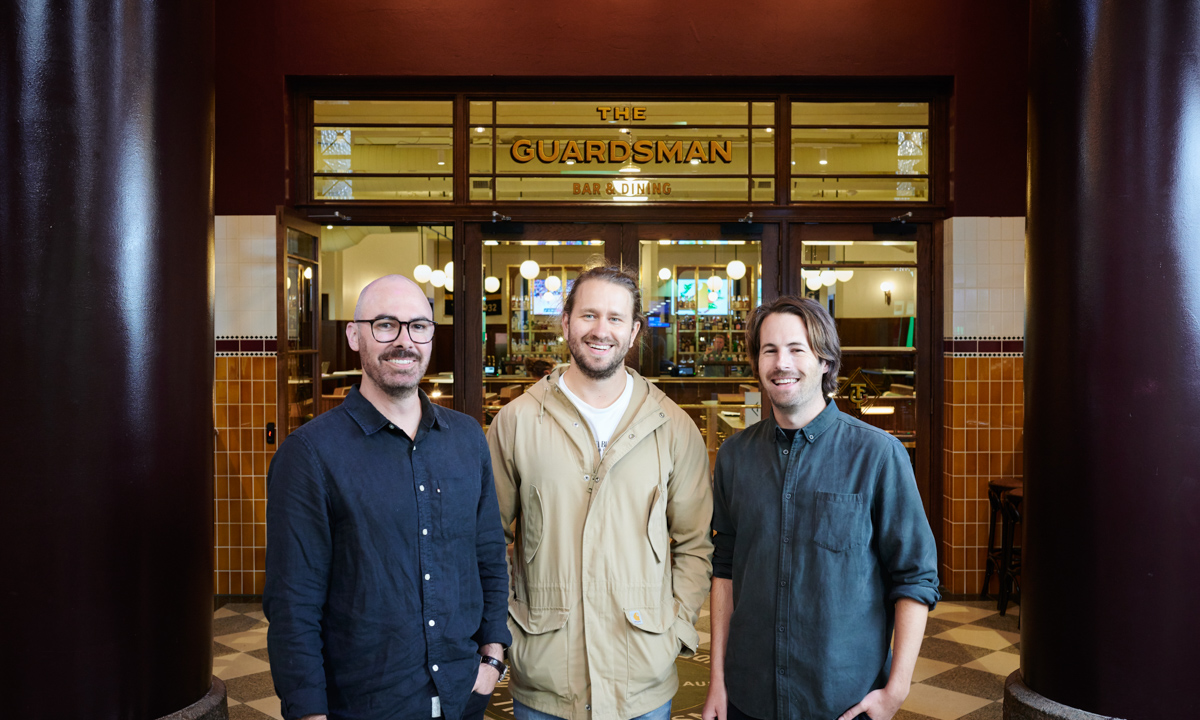 The space is a 600-square-metre crucifix, with the two wings infilled with the kitchen and toilets. A central bar divides the room, with mixed high and low seating strewn throughout.

The timber panelling lining the room references the original panelling still visible in the Casino’s gaming hall; heritage light fixtures and sconces are used, some of which are original while others have been recreated; the clock housed in the room’s central pillar is not original, but special attention was paid to find an object that fit the era.

Even the original Jarrah floor has been refurbished, in what the architecture team describe as a costly and time-consuming process. 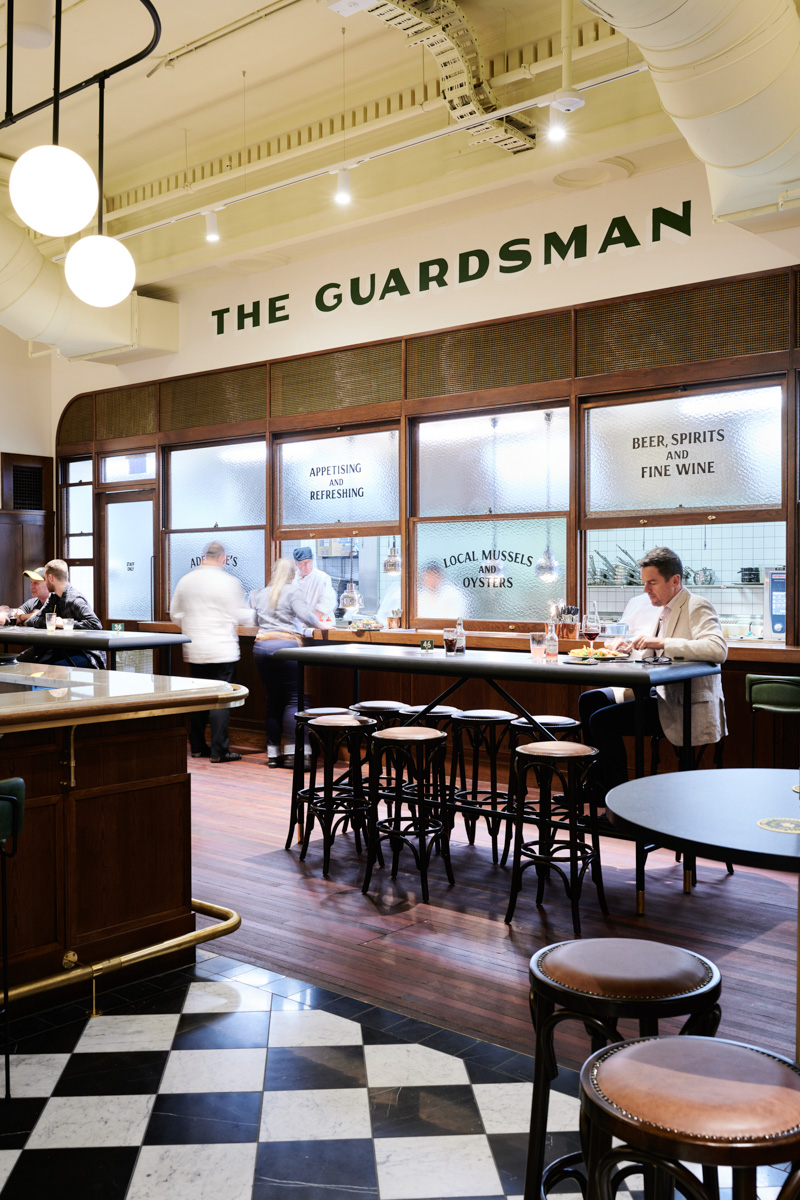 “In projects like this, when you’re working in historical or heritage sites, there’s a tendency to take shortcuts, and those things didn’t occur, because we had a client that was dedicated to the cause,” Dave says.

“Whilst it might look like a simple approach, there’s an incredible amount of research done, in signage and in imagery and in detailing, and how things were done in that era. And then trying to replicate that in a modern way across the whole venue, so there’s a real quality to the whole space.

“As the project evolved and got closer to completion, people came in and said, ‘What did you actually do with the venue?’ And that in itself feels like a compliment, because it feels like it belongs here. It hasn’t felt like we’ve missed the mark in terms of interpreting the heritage influence.”

Tristan from Uppercase similarly spent time digging through old materials to create a graphic identity for the space and the business that fit.

A typical job could take up to a couple of months, he laughs, but this one: “Two years.”

“It was quite a difficult brief to undertake,” he says.

“I had to reach out to a number of different practitioners in Melbourne and Adelaide and really bring in this sense of craft, to make sure that it’s authentic.

“It did turn out to be three or four times harder than a conventional way, but it’s worth it in the long run, because you see the finish and it looks like it’s been uncovered, and it’s always been there.

“I’ve had people from interstate, sign painting geeks, already talk about planning trips to come and see all the heritage signage and gold leaf and sign painting. That’s pretty cool.”

What’s next for the Adelaide Casino?

Rosie and Greg smile politely when we ask if the opening of The Guardsman means a break for the team at SkyCity Adelaide. A terse ‘no’ is the response.

“Our expansion opens in October, so that’s coming up very quickly. So now we start work on that, really,” Rosie says.

“And then just last week we announced about $7 million being spent on another project in the current Casino building. So, level one, complete revamp of the space in there, which is very exciting.

The 2010s had a transformative impact on the Adelaide Riverbank. This decade will reveal whether all the master planning and funnelling of cash into the revitalisation of our prized cultural landmarks will amount to longstanding interest from the public.

It’s not a given, but Greg foresees a particularly rosy future.

“What we’re seeing is the Riverbank [approaching] critical mass,” he says.

“Once the expansion’s finished, we’ve got the amazing Festival Centre, we’ve got the Convention Centre, and everything that happens at Adelaide Oval – all that infrastructure is really exciting.

“I think we’ll look back at this as a pretty important point in time, in terms of actually where a lot of people will now gravitate towards this Riverbank precinct.”

Stop by The Guardsman by heading down into the Adelaide Railway Station. The venue is open seven days, from 6am ‘til late weekdays and 11am ‘til late Saturdays and Sundays. 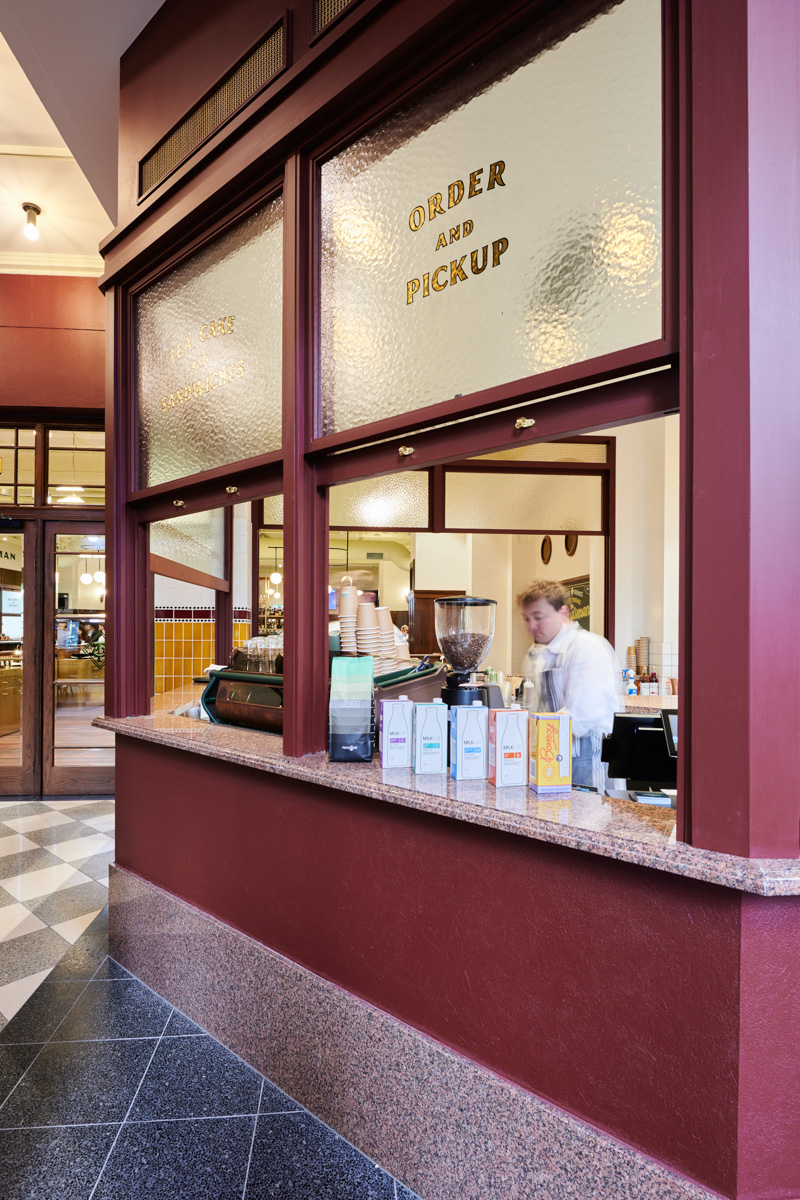