The specials board at Nano is a revolving feast of comfort food favourites, but for our public BBQ challenge, chef and co-owner of the Ebenezer establishment – Stefano Cappoccia – got as creative as our cooking setup.

A café in the truest sense of the term, Nano on Ebenezer Place is an East End institution.

Owned and operated by husband and wife team Stefano and Filomena Capoccia, Nano has fed a generation of city slickers – from architects and hospital workers to the early drafts of what we would now call hipsters. 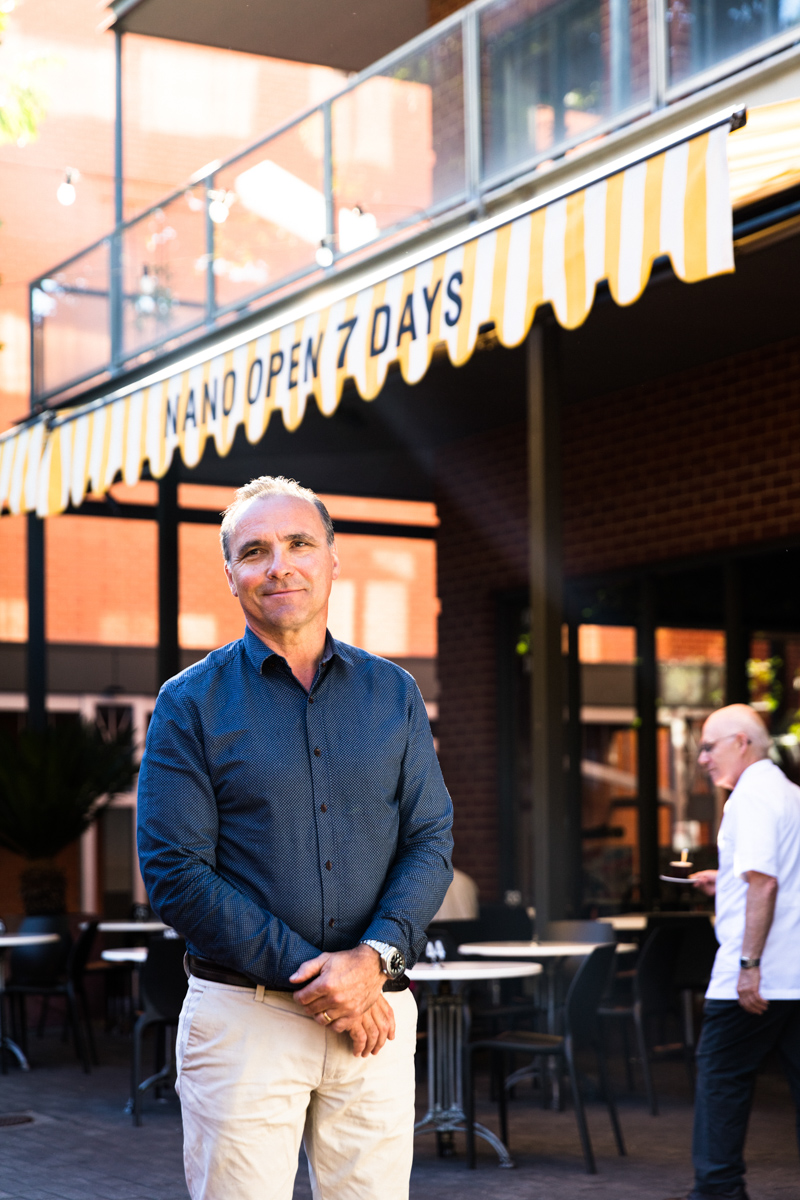 And while the café and its owners are only half way through their 20-year lease, the story of chef Stefano Capoccia stretches back much further and touches many of Adelaide’s most important eating institutions.

“Before Amalfi I think we had Quo Vadis Pizza Bar, which was opposite the Arkaba Hotel. It’s not there anymore, it’s a Foodland now,” says Stef.

Indeed, it was the Capoccias who established the venerable Amalfi on Frome Street – creating a true icon of Rundle East eating. The stories of Stef and Fil’s children growing up above the restaurant are oft-told – both kids have previously regaled CityMag with tales of the swing in their living room that was tied high to the rafters of the old building.

In his time making pizza across these multiple venues, Stef has seen a lot.

“We used to serve people like ACDC and INXS – the Eagles, who else? Bob Marley,” he says, without raising an eyebrow.

“My brother – George – served Bob Marley. We’ve been around, we’ve been doing pizzas now for a while.”

But in all that time, there’s a few things that have stayed consistent – Nano’s pizza, Amalfi’s pizza (and we’re sure Quo Vadis’ as well) is and was absolutely delicious.

Flour, yeast, olive oil, water and salt are the five ingredients at the core of Stef’s cooking practice and every day he rises before the sun to make the bread, foccacia and pizza bases that form the backbone of the Nano menu.

While Sundays used to be a day off from the daily grind of forming dough, Stef and Fil have recently decided to make the family business a seven-day-a-week concern.

For the couple, it seemed necessary to once more institute Sunday trade as they felt custom slipping ever so slightly after the relocation of the Hospital.

“It wasn’t a matter of identifying people from the Hospital but rather the Hospital brought people to the area,” says Stef. “We know we had to fill that void.”

And fill it they have, with new and returning customers. People from all over the city are coming back to the café to reconnect with Stef’s simple and unpretentious fare.

Stef acknowledges that it’s hard work, but he’s not complaining. The chef enjoys the transformative power his food has for people – the way it gets their endorphins flowing and has “a flavour that makes people want to come back”.

And return customers is really what has kept Stef and Fil in the hospitality industry for so long. The ability to provide a friendly face alongside good food and drink is, they believe, the core of their business.

“Being acknowledged,” says Stef – explaining what he understands to be the core of hospitality.

“If you’ve got someone coming in three or four times a week and has the same coffee or whatever, and you just go, ‘your usual coffee’ – they feel like they’re special. If someone always has chilli with their pizza and you bring out the chilli without even asking, they feel like there’s something more here than just a place to eat.”

Over decades, Nano has proven it is indeed more than a place to eat – it’s a source of near infinite and renewable energy. 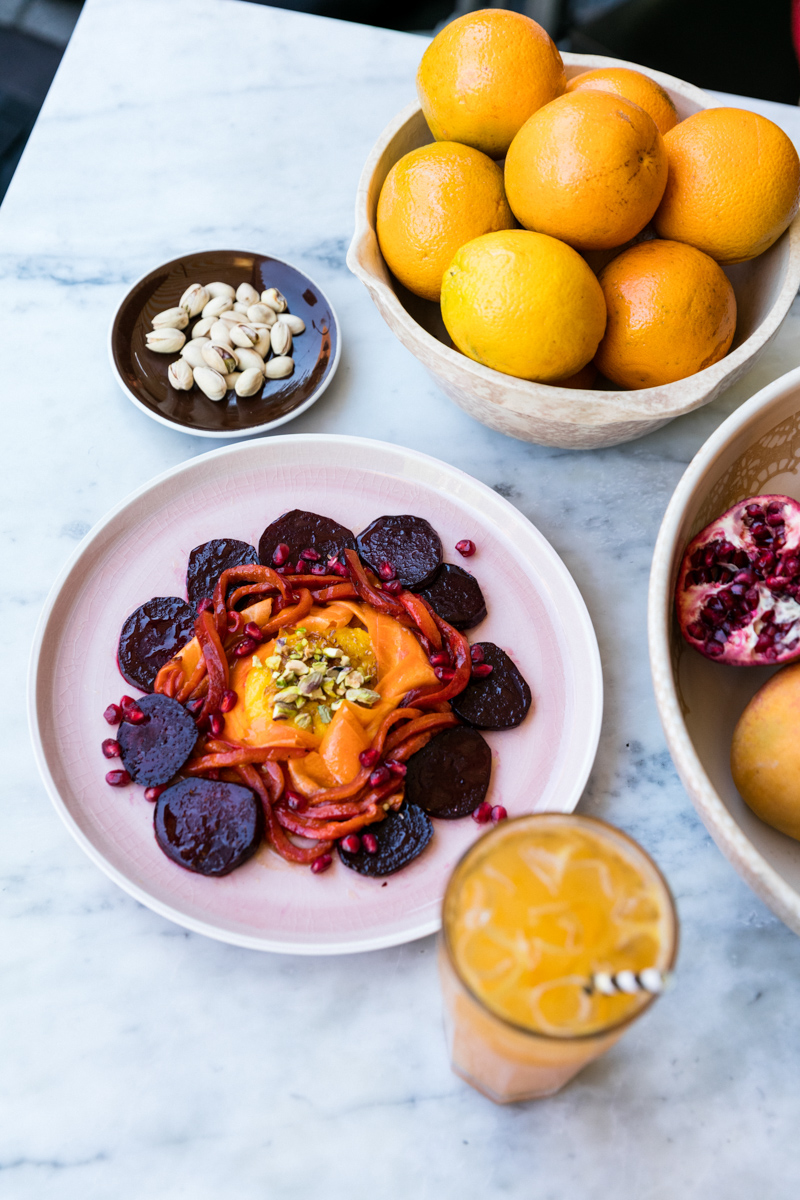 If ever we saw a cheeky salad, this is it. And it’s accompanied by a freshly-squeezed orange juice, because if there’s no OJ, you’re not at Nano

Remove beets with slotted spoon and place in ice bath to stop cooking.

Remove skins from beets and bake for 20 minutes.

Remove beets from oven, slice, and pack for BBQ.

Boil fresh water and boil strips of carrot for 2 minutes. Remove carrots with tongs and place in a mixing bowl with teaspoon of honey and a nub of butter while carrots are still warm.

Toss carrots, honey and butter together and pack to take to the BBQ.

Bake whole capsicums, turning occasionally, until skin is charred and blistered (about 10 minutes).

Remove from oven and transfer to sealable plastic bag to sweat. Once skin becomes loose, peel the skin and discard. Remove stem and seeds, slice lengthways into long strips. Pack separately to take to the BBQ. 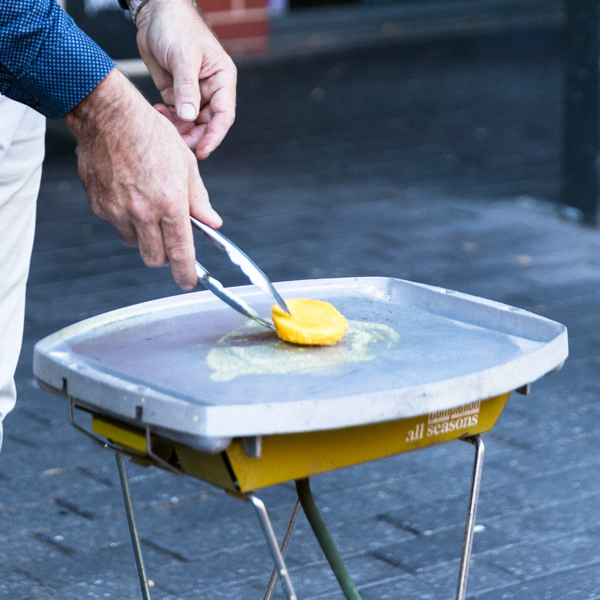 Slice mango to produce two cheeks, and peel away skin.

Pop a nub of butter on the BBQ hotplate. Once butter foams and bubbles, add mango cheeks and cook until it begins to brown – we’re going for caramelisation. 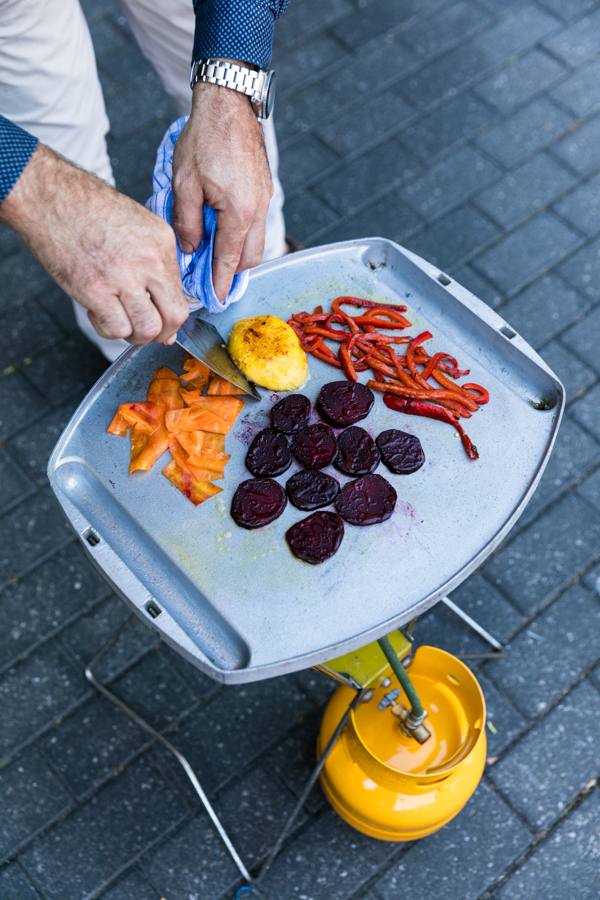 Once browned, flip mango and move to cooler part of hotplate.

Reapply butter as needed and place beetroot, carrot and capsicum on hottest part of the public BBQ for about five minutes. Whilst doing this, place a ceramic bowl containing the remaining butter-honey sauce next to the hotplate to warm while cooking. 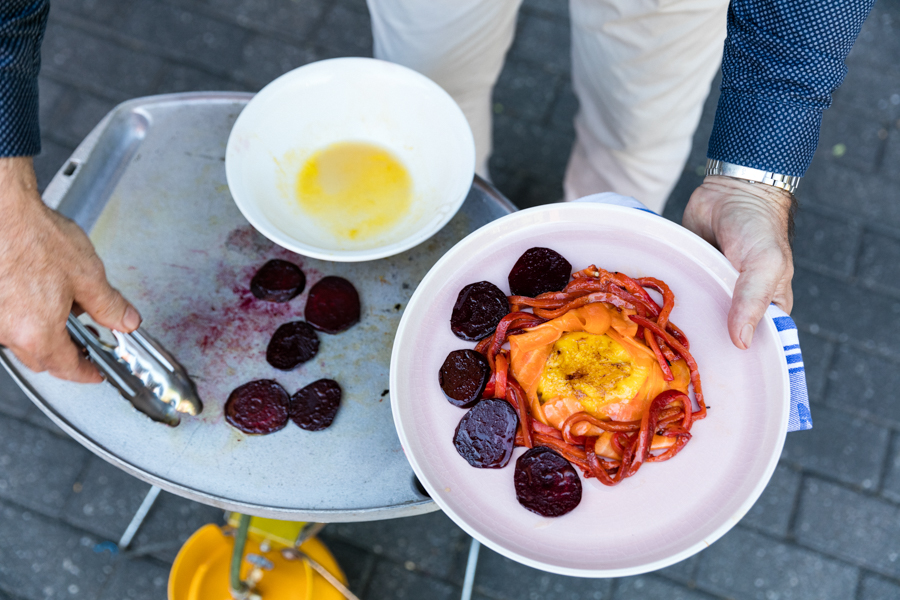 Plate up with mango cheek in centre, surrounded by carrot strips. Place capsicum strips around carrot and finally arrange beetroot on the outer edge.

Distribute pomegranate over dish and garnish with chopped pistachios. 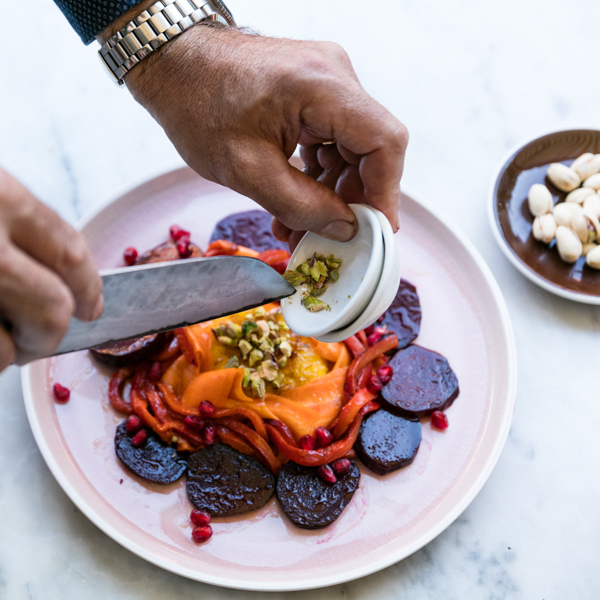 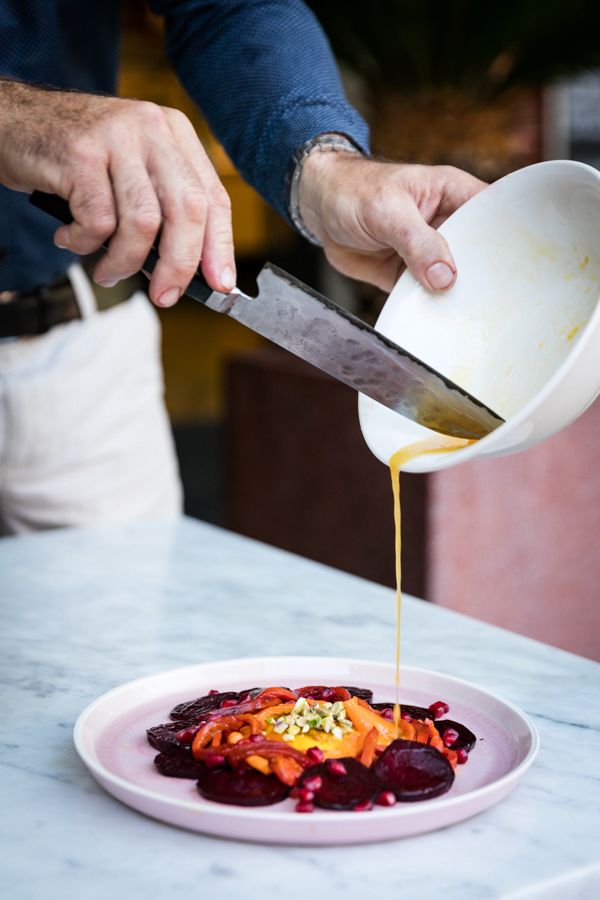