Acclaimed musician Zaachariaha Fielding of Electric Fields has finally found the “patience” required to produce visual art. He says his first exhibition, at APY Gallery Adelaide, is “colourful and emotional”. 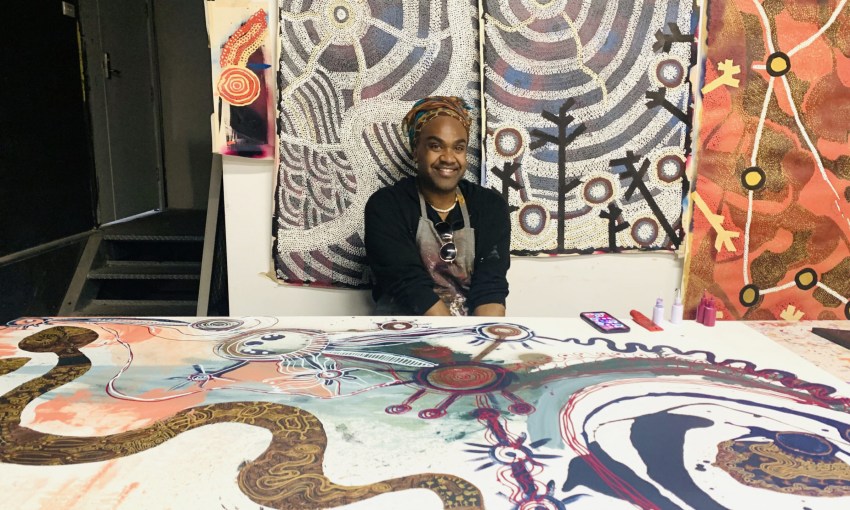 This is the same day South Australians will eventually be told to enter a six-day lockdown.

Due to the growing concern, Zaachariaha’s inaugural visual art exhibition, Gold and Silver Linings, is likely be postponed, and his family in the APY lands probably won’t be able to attend.

Despite this, the artist remained optimistic.

“It’s been a roller coaster, the wheel of fortune – up and down, up and down,” Zaachariaha says of the year that’s been.

“And this is definitely a down moment at the moment. But I’m finding ways to get through.”

A coping mechanism for Zaachariaha throughout 2020 has been art.

When coronavirus first hit in March, the musician left the city to join his family in Mimili on the APY Lands.

The pandemic allowed Zaachariaha some time away from the hectic touring schedule of electro-soul outfit Electric Fields, and gave him the opportunity to take to paper and canvas with his nieces and nephews.

He found the practice of painting therapeutic.

“It started off just… as a way for me to relax,” Zaachariaha says.

“I did attempt painting when I was really young, and I enjoyed it, but then I wasn’t mentally ready for it. It requires patience and I didn’t really have that back then.

“But this COVID thing gave me the opportunity. It started off just me and my little sister and my dad, and we were just banging on one canvas and just doing these little infinity signs. It was so much fun.”

As the eldest of the nine siblings, Zaachariaha says he felt the brunt of the “rawness” in the community and within his family.

Growing up gay and “different” – as well as “just being Aboriginal” – presented challenges to Zaachariaha, but his experience made life easier for his younger siblings and their children.

“It was just really hard to just be in my vessel,” Zaachariaha explains.

“I think when the younger ones are a lot more relaxed, it’s because I feel that the ones before them have paved a way for them to not feel so stressed.”

Zaachariaha eventually returned to Adelaide after the first lockdown, and joined a group of artists working at the APY Art Centre Collective.

With his newfound patience, he produced enough work to put together his exhibition, Gold and Silver Linings, which did eventually open at APY Gallery and is currently on show. 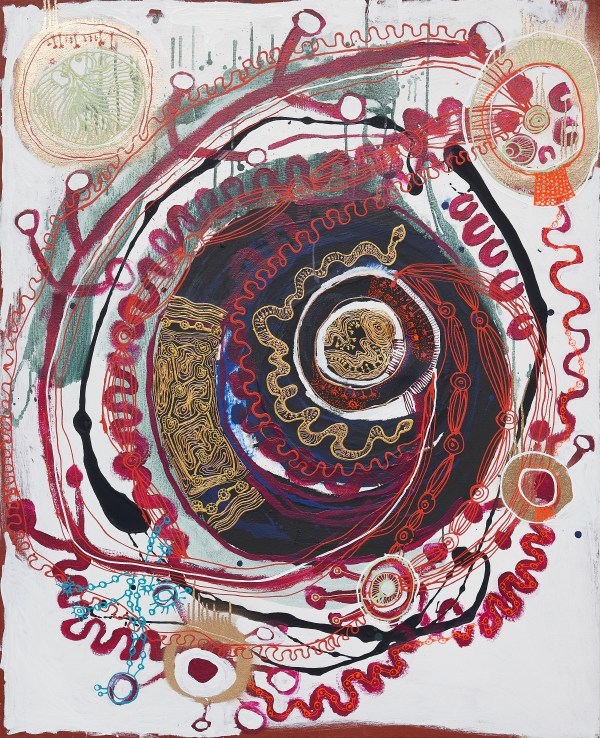 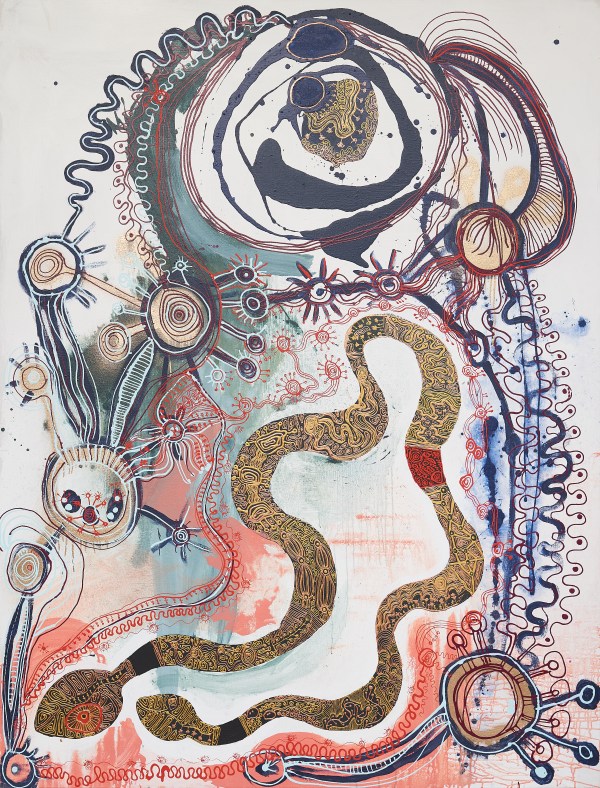 “When I got given the canvas my immediate reaction was to do a serpent… [It] was a journal to write in,” Zaachariaha Fielding says.

Throughout his time at the APY Art Centre, Zaachariaha says he developed a natural affinity to the space and for those who inhabit it, as hearing the other artists’ stories and seeing their paintings brought him back to Mimili.

“They have these conversations in the gallery and it reminds me so much of home,” Zaachariaha says.

“The essence is there. It’s so deep because that’s my memory as a child.”

Zaachariaha describes his Gold and Silver Linings works as “colourful and emotional”, and says they act as journals for how he’s dealt with a tumultuous year.

The colours, for example, were all chosen purposefully, as were the figures he chose to paint, such as the giant serpent.

Zaachariaha’s two art practices, visual arts and music, will co-exist harmoniously, he says, and allow him to explore who he is more rigorously.

And Electric Fields fans hungry for new music shouldn’t need to be patient too much longer. Zaachariaha says there are new songs “you’re going to dance to” planned for release in early 2021.

“I’m really excited for people to hear the new material and for them to see the colours – and with the same eye as you do when you look at a piece of art,” he says.

Gold and Silver Linings is on show now at APY Gallery until 10 December. The gallery will hold a closing event for the exhibition on 10 December from 6pm.

You can also browse the works here.