Black voices captured the city’s attention on Saturday as over 6,000 people protested mass incarceration and deaths in custody of Indigenous people, in a political movement spurred on by the killing of African American man George Floyd by a police officer in Minnesota.

“This week has been very traumatising for our community and our people,” Ngarindjeri, Narungga, Kaurna and Noongar woman Natasha Wanganeen tells CityMag, days before the Adelaide protest.

“In this last Reconciliation Week, when this country is meant to be celebrating black lives, all we saw was a black man with a white knee on his neck.

“It’s very hard to watch because we have family who have seen that happen but they didn’t have a camera. They’ve got no justice.”

On 25 May, now-sacked police officer Derek Chauvin killed black man George Floyd in Minneapolis by holding a knee on his neck for almost nine minutes. A private autopsy by the family ruled the death as homicide. The incident lead to civil unrest in almost every state in the US, and eventually spread to Australia.

Almost two weeks after the murder of George Floyd, on Saturday, 6 June, Tarntanyangga Victoria Square is packed with thousands of protesters wearing face masks and holding placards emblazoned with messages such as “silence is betrayal” and “justice for BIPOC” (Black, Indigenous and People of Colour) as part of a rally co-organised by Natasha and activist group Sosblackaustralia.

Helicopters whir overhead as SA Police stand on the fringe with horses. Volunteers hand out sanitiser.

Although this mass gathering is titled ‘Solidarity with Minneapolis,’ it includes a string of African and Aboriginal Australian speakers, and is designed to draw attention to Australia’s own chequered history of violence, racism and murder of black people.

“We saw Australian reporters rush over to cover the death of George Floyd, and it amplified how little they knew about what was going on here to Aboriginal people,” Natasha says.

“We have a history of letting the police kill Aboriginal people, men, women and young kids, without convicting them, without getting any type of justice for their families.”

Since the 1991 Royal Commission into Aboriginal Deaths in Custody, there have been over 400 deaths of Aboriginal and Torres Strait Islanders in police custody. There have been no convictions related to any of those deaths.

A 2018 Federal Government report highlights the overrepresentation of Aboriginal and Torres Strait Islander adults in prison, stating they make up 2 per cent of the national population, but over a quarter of the prison population.

“Over-representation is both a persistent and growing problem,” it says.

Proud Kaurna and Narungga man Jack Buckskin tells a silent crowd that despite the odds, “I represent a heritage that’s been here for thousands of years. My parents started this reconciliation thing… but hopefully this message gets out.”

“Being Australian is standing here.”

Jack says this in reference to Prime Minister Scott Morrison’s stern warning last week, cautioning Australians against attending anti-racism protests due to risk of COVID-19. The PM said anyone who attended would be putting their own  and other people’s health at risk.

“They never used to bash our young ones,” she says. “Why do they have to punish them?”

On 1 June, a video emerged of an Aboriginal boy in Surrey Hills having his legs kicked out from beneath him by an NSW police officer.

The NSW Police Commissioner Mick Fuller defended the officer’s actions by saying he’d “had a bad day.” The boy was eventually released from hospital with no serious injuries.

Elder Aunty Joan Lemont, who Natasha describes as “one of the original protesters back from the ‘70s,” says she’s been crying all week.

“Is there any justice in this country?” she asks.

“They want to build bigger jails to house Aboriginal youths. Change has to come.”

Aboriginal children make up almost half (48.5 per cent) of South Australian young people detained in secure care, a 2018 report by the Guardian for Children and Young People, Penny Wright states.

Her office’s annual report also states in June last year, only 62.7 per cent of South Australian Aboriginal young people in out-of-home care were living with someone from their family, community or cultural background. “There’s nothing being done Federally and in the State.”

“No longer can we be silent and accept the genocide of our people.”

Violence against young Aboriginal teenagers has been highlighted in cases such as the death of 19-year-old Kumanjayi Walker, shot in his home in Yuendumu, Northern Territory in November last year, as well as 14-year-old teenager Elijah Doughty in Kalgoorlie, Western Australia, who was killed when hit by a car.

Samara Fernandez-Brown, cousin of Kumanjayi Walker, says the “Walpiri community are disgusted and outraged” by the murder of George Floyd, as it reminded them of losing their loved one.

“The system is so brutally racist… families are hurting. If you’re not angry you’re not paying attention.” 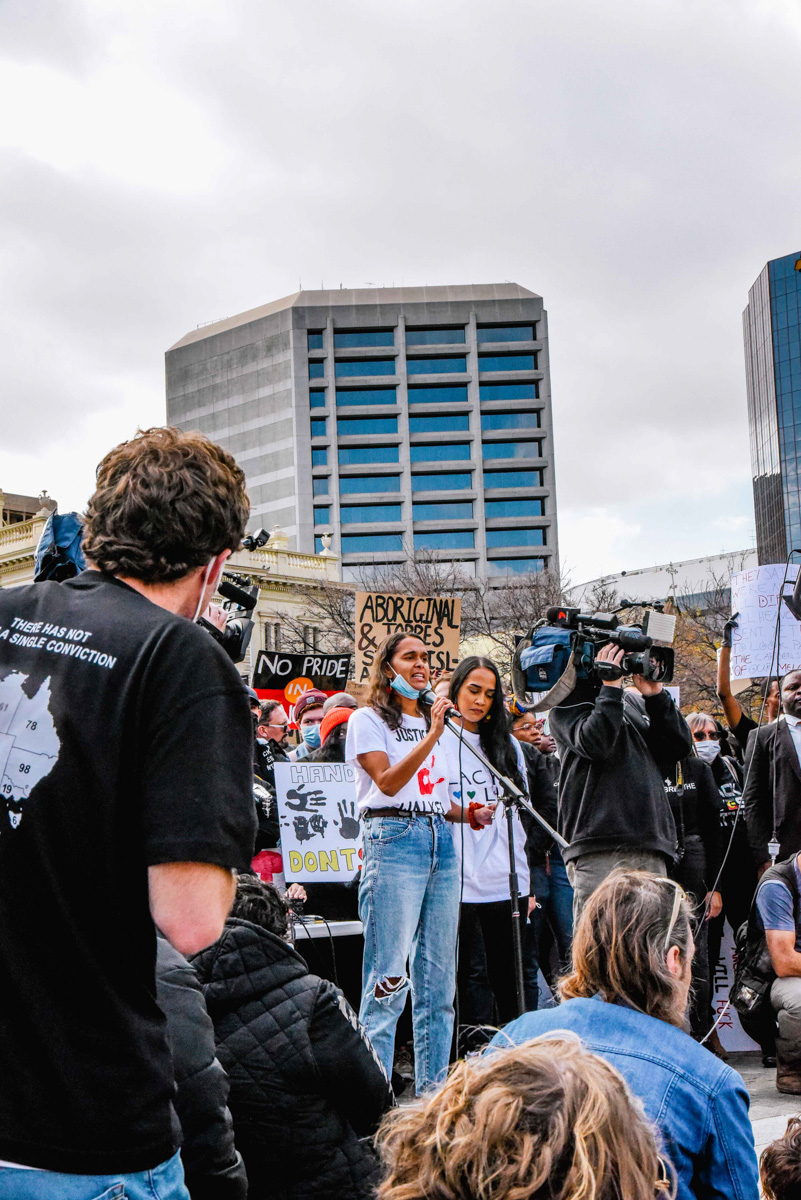 South Sudanese rapper and multicultural youth leader DyspOra, aka Gabriel Akon, explains that his movement through the world is often tinged with racism.

“When I succeed I’m Australian,” he shouts, “but when I fail I’m African.”

A report published two years ago found the media played a part in increasing verbal and physical abuse against young South Sudanese Australians.

University of Adelaide lecturer John Budarick wrote in The Conversation, “this type of bias has been shown to have negative impacts on the wellbeing and sense of belonging of African-Australians.”

DyspOra told the crowd he stood with his “Indigenous mob” and “you can do better for my black brothers and sisters, Australia.”

The crowd then marched north along King William Street, demanding to be heard.

To be a good white ally, Natasha Wanganeen says, it’s important to listen to First Nations voices, don’t dispute the facts, and continue dismantling systems of oppression even once the rallies stop.

“I ask [non-Aboriginal people] to open their hearts, open their minds as human beings and look at the bigger picture,” she says.

“This is the time to listen and take it in and actually absorb and understand the words and the stories that you are being told.”