Vicious Video is a love letter to vintage films

In a deserted mall in the middle of the CBD, a new retail store awaits a horde of collectors vying for their pick of past eras' best cinema.

There’s a 1979 essay by Joan Didion about a man that breeds orchids for a living in the US.

At one point in the piece – called Quiet Days in Malibu – Didion writes that while standing in a sea of the fragrant flowers, she realises she had never “talked to anyone so direct and unembarrassed about the things he loved”.

In journalism, you’re lucky to meet these kinds of people every so often – unabashed aficionados, prepared to die for the things they cultivate, collect or curate. Deniel Cross is one of these people.

Standing in his own sea of ‘80s horror, art house and animated video tapes in an often-overlooked arcade just off Rundle Mall, Deniel’s passion is palpable.

“Everything you see here is representative of my love.”

Vicious Video opened last week in a Renew Adelaide shopfront within Charles Street Plaza, and specialises in selling roughly 800 second-hand, pre-loved videotapes. The shelves – themselves salvaged from a video shop – are illuminated by low pink and green neon lights, and the shop is soundtracked by a vintage film (when CityMag visits, the 1987 superhero flick Masters of the Universe) rolling on a large television behind the service counter. Next to the counter are a stack of videotapes yet to be watched, such as 1999 crime dramedy Two Hands.

The space hums with the feeling of a bygone era. The films on show are from a period of filmmaking when directors didn’t rely on CGI to boost the value of a film, and artists such as Boris Vallejo and Frank Fazetta were commissioned to create hand-painted vignettes of buxom babes or beastly beings for videotape covers.

Deniel, an avid collector, doesn’t see this shop catering to a wide clientele. The logic for the soft, dappled curtains in the shop’s windows is to shield Vicious Video customers from the wider plaza’s judgemental view. He wanted to create a safe space.

“The shop is purely for the collectors and the people who vibe off of this incredible era that we had in our lives,” Deniel explains.

“What these artists and what these designers did back then was put a lot of time into making visually striking products on the covers. I don’t think that’s died out, and if you can find examples of unfaded damaged originals, they still carry that potency.

“Even if you haven’t seen the film before, you have no nostalgic connection to it, they still have a visual arrest.”

The videos range from $30—$600 and are priced according to Deniel’s intuition, which has been cultivated over decades of collecting. He also looks to eBay and Facebook groups – such as VHS Social Group – for guidance.

Some labels are scarcer and more sought after, which impacts pricing, he says. People are willing to pay a lot more for certain labels. (The most expensive tape in the store is an apricot copy of a 1986 BMX action film Rad, going for $600).

During CityMag’s visit, the store gets a visitor: Bryan Lynagh, owner of Grote Street live music venue Broadcast Bar. He’s here to buy 1976 horror adventure feature Grizzly, which he’ll later chuck on the bar’s television. He says he wants this copy of the film in particular because it’s in mint condition.

“The Opal label? I’d say it’s very hard to find them in good nick because the clams are so brittle,” Bryan says.

“They crack and smash easily. This isn’t too badly affected by sunlight at all. And you won’t find these at Savers or op-shops. Probably because of the theme, and also a lot of Salvos and that just don’t stock VHS anymore. If they do, it’s Titanic and Harry Potter.” 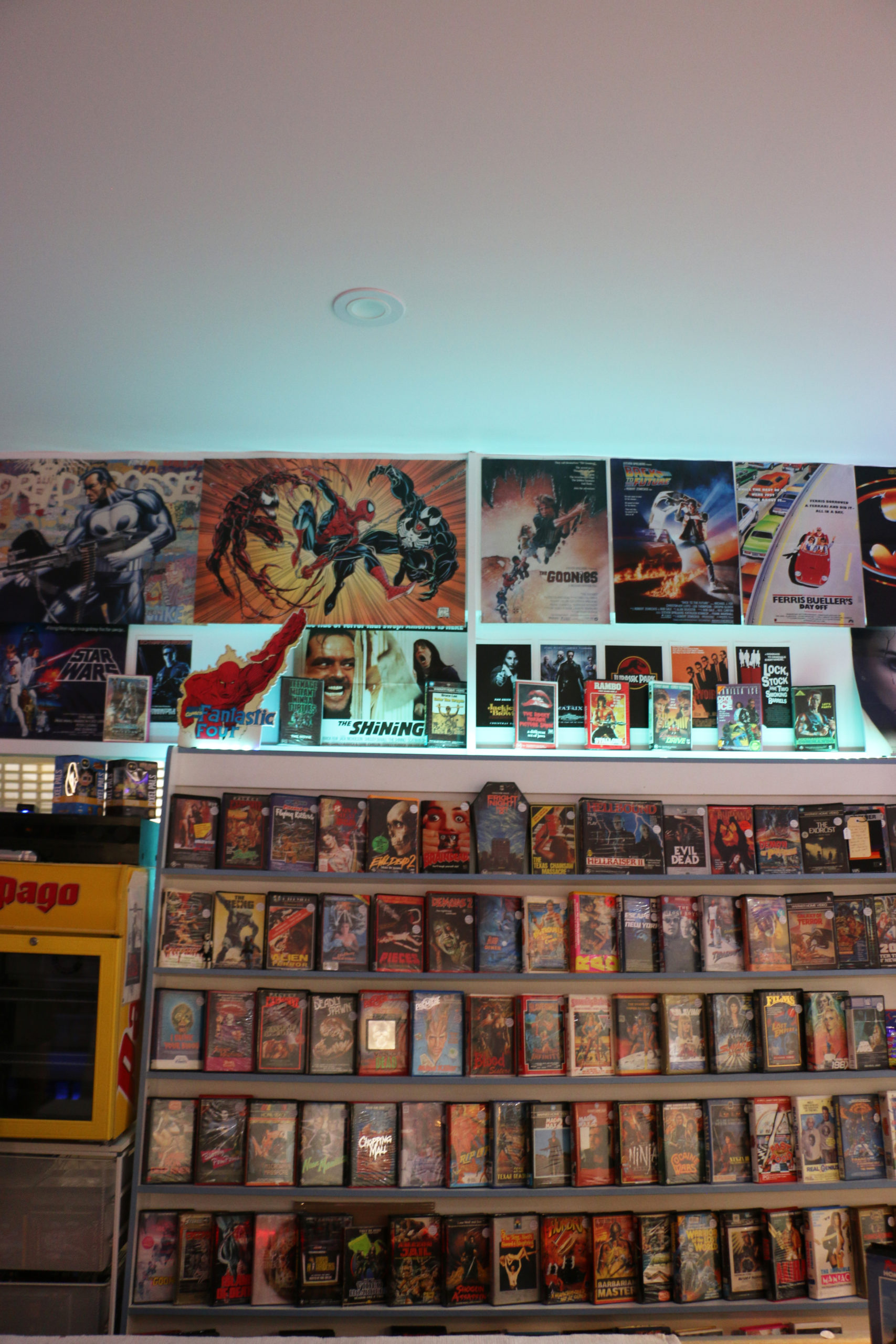 Deniel got into collecting 15 years ago, with his passion sparked by rummaging through op-shops and yard sales. When the op-shops started turfing out videotapes he went online, finding a community mostly located on Australia’s east coast and connected through the World Wide Web.

Asked what his favourite genres are, Deniel says he’s a massive fantasy nut. He loves his ‘80s “barbarian flicks”, such as Conan the Barbarian and The Beastmaster. “Any sort of sorcery is a big weakness to me,” he says.

Much like his days of personal collecting, there are three things he looks for when stocking a tape at Vicious Video.

Firstly, the cover. Coming from a visual arts background, Deniel appreciates aesthetics. Secondly, the film itself.

“Sometimes kick-ass films come in shithouse covers,” Deniel says, referring to a “monotone” blue copy of Martin Scorsese’s iconic film Taxi Driver as an example. “But the film – my god – is a firestorm,” he says, smiling.

“The third most important one is nostalgia,” he says. “So the connection you either had with the film, and seeing it at a moment and it connecting you to that time and place.”

There’s a bit of behind-the-scenes care that goes into a videotape before it hits the shop floor. After streamlining his restoration process down to a fine art, Deniel will spend 25 minutes breathing new life into a videotape. This includes removing the often-troublesome Blockbuster sticker that obscures the cover artwork, and getting rid of dust.

Stickers plastered over the videotape window present an entirely different problem, as it means a buyer can’t tell whether there’s mould inside the cassette. Mould is a “big killer” of these artefacts – and the machinery used to enjoy them.

“If you put a moulded tape into your machine, it’s like an STD. Your machine catches it and then whatever you play thereafter will catch the mould,” Deniel says.

“To clean them out, for starters, you’ve got to be able to see it to know that it’s there, so getting rid of those big deadly stickers is a feat. And for some it’s a nasty process, but I’ve got my own techniques that I’ve honed down.”

Most of the films Deniel sells at Vicious Video come from his own collection. Letting them go doesn’t feel great, he says, but he feels better knowing they’re going to a good home, or will be part of a new collector’s education. 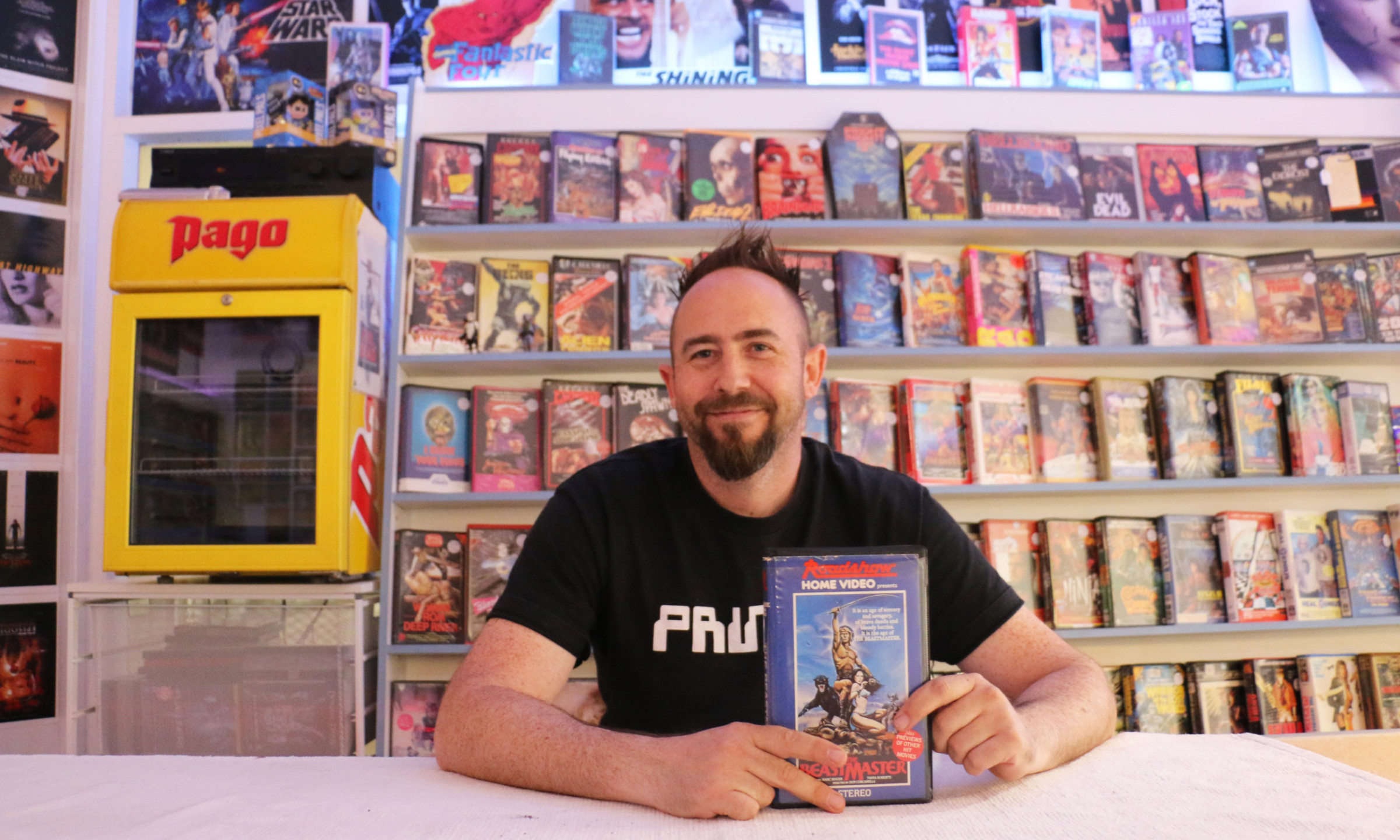 Deniel holding his favourite film in the store, ‘The Beastmaster’, directed by Don Coscarelli