Broadcast Bar is making merch to counteract the cost of COVID

Grote Street live music venue Broadcast Bar has teamed up with former graffiti artist Simon Burt to produce a line of merchandise they hope will keep the "cultural hub" afloat while it's stifled by coronavirus restrictions. 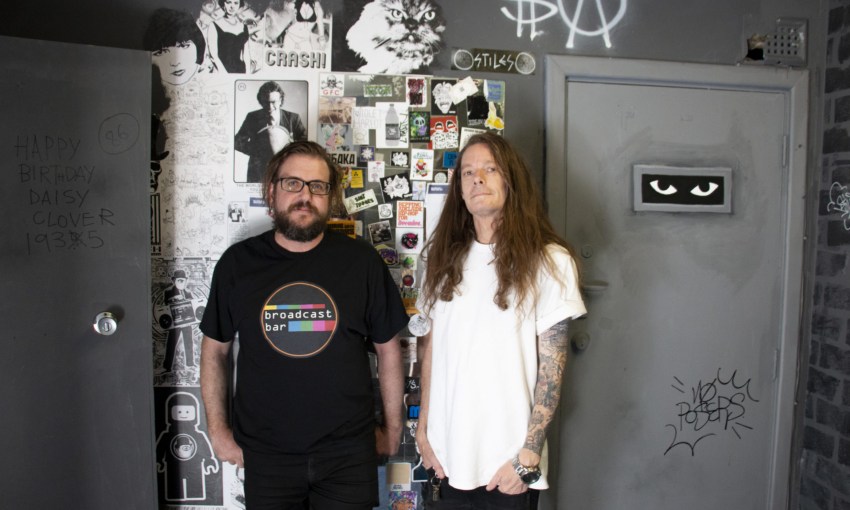 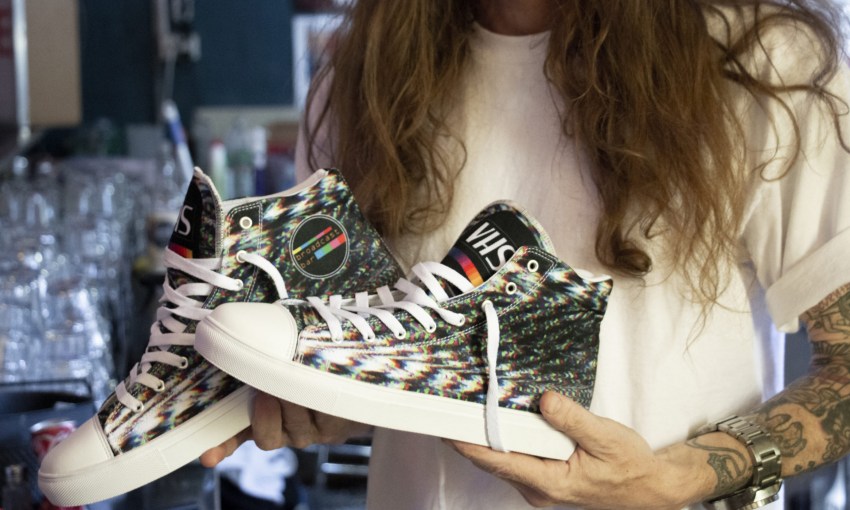 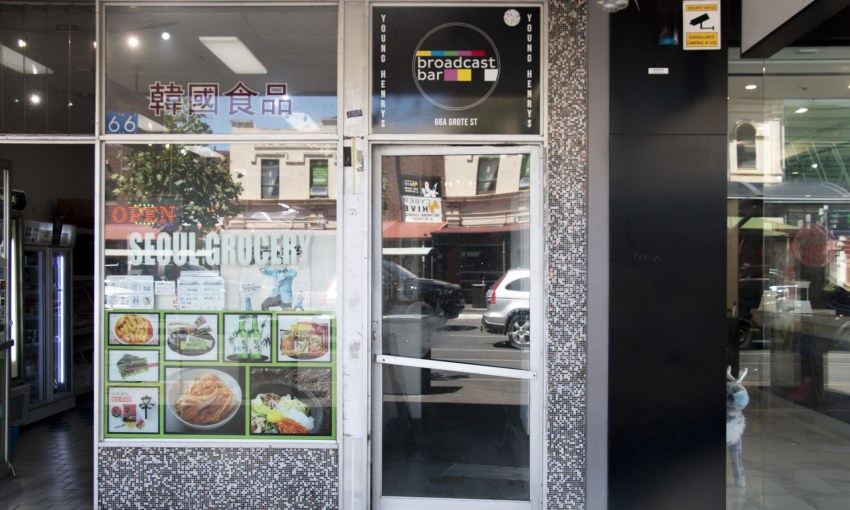 Right before we step into the narrow, carpeted staircase leading up to Broadcast Bar, an InDaily news notification flashes across our iPhone screen: “Seven more deaths as SA eases some hospitality, home gathering restrictions”.

The news on Thursday, 10 February, is that South Australia’s COVID-19 restrictions would relax in certain outdoor settings. In outdoor spaces only, density limits increased to 75 per cent and an allowance was made for the stand-up consumption of alcohol.

Inside Broadcast Bar, we read the news to the dive bar’s owner, Bryan Lynagh, who’s nursing a cup of coffee and proudly wearing a black Broadcast Bar t-shirt. We ask whether these changes impact him and the all-ages music venue he’s run for four years. Deadpan, he responds: “It doesn’t help venues like this.”

“We don’t have an outdoor space – this is a place you come to dance [or] sing,” Bryan says.

“I’ve seen that [band] room full of people singing. I’ve seen people crowd-surfing. That’s what they want. The news is incredibly frustrating for a niche art-driven venue like this, and it doesn’t help us at all.

“I’ve got three bands on Saturday night so I’ll be snapping out 40 chairs in there. Everyone seated. I’ll have to employ someone here, someone there, to make sure everyone’s seated.”

They need that safe place where they can come and not get ripped off, not get treated like shit, get that appreciation as artists [and] be able to put on these shows.
—Simon Burt

Indoor hospitality venues, like pubs and bars, are currently operating under a 50 per cent density requirement. There is also a ban on stand-up consumption of food and alcohol, as well as a requirement to wear a mask. Dancing is also banned.

As a consequence of these restrictions, Broadcast Bar’s current financial situation is tight.

“It’s incredibly tough,” Bryan explains. Most of the business’ takings go straight back into paying its bills, which leaves “a little bit” for the owner to personally get by.

“Before the restrictions were announced late Boxing Day last year, I had all of January and half of February booked every weekend, Friday, Saturday,” he says.

“When they announced the restriction changes back to seated, back to less people, everything was just cancelled. No one wanted to play under those circumstances.”

To allay some of this financial stress, Bryan has joined forces with visual artist Simon Burt, aka the former graffiti artist ‘Stiles’, to produce a line of Broadcast Bar merchandise.

“The VHS [logo] was the real iconic thing that set it off.”

Broadcast Bar’s VHS logo is a nod to the venue’s actual bar, which is filled with hundreds of old video cassette cases. A t-shirt featuring a metal-style logo is a reference to the genre of bands that often play at Broadcast. 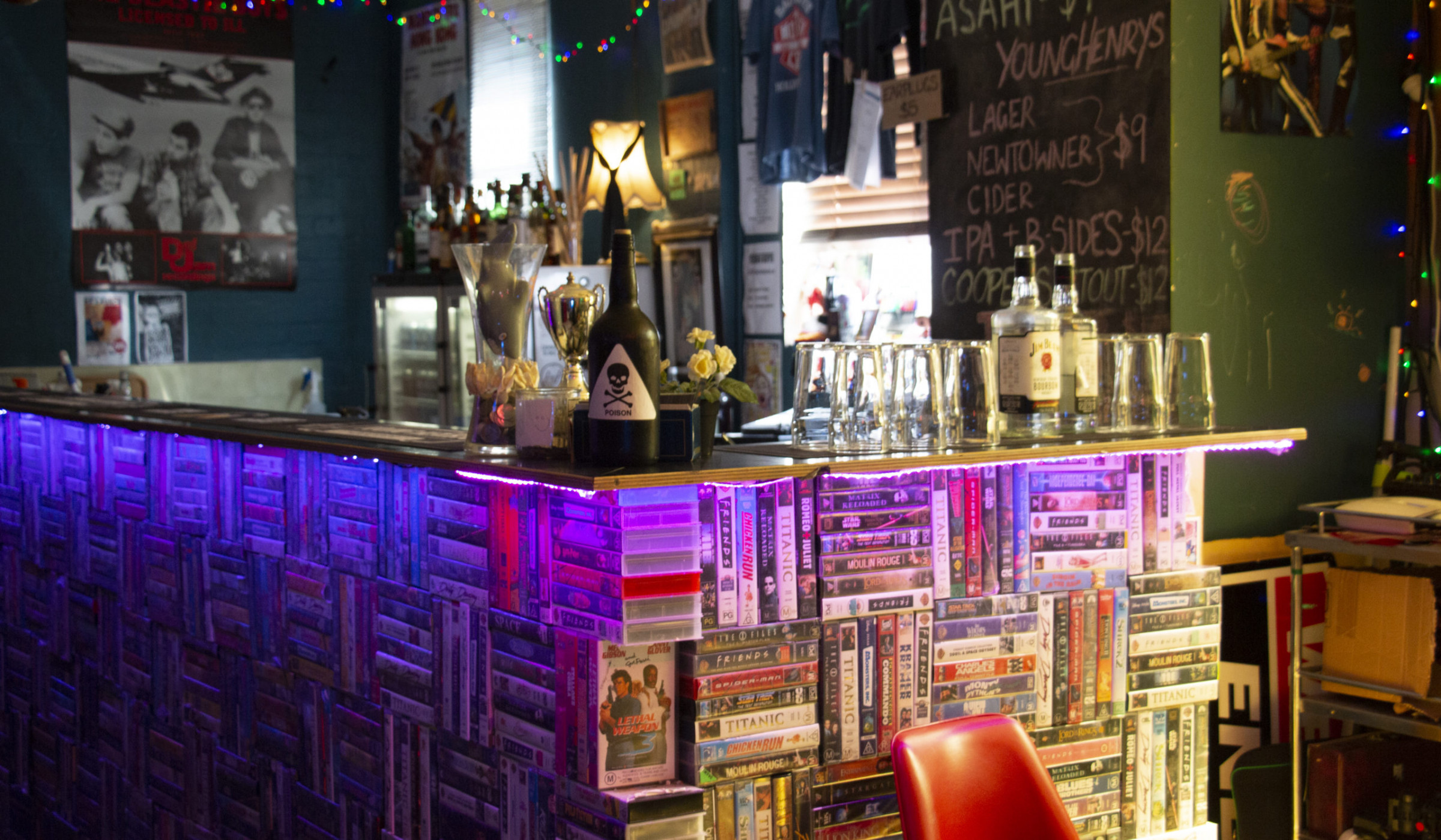 The idea is to immortalise the personality of the venue in clothing, and allow members of the public – who are unable to attend or enjoy the premise in its current state – to support it in another manner.

Simon, who’s now a practicing visual artist, was happy to design the garbs, as he knows the importance of supporting cultural hubs like venues and bars.

“When I came up as artist, I spent my twenties in Sugar Nightclub. That’s where I really cut my teeth with exhibitions and hanging out with other artists,” he says.

“If I didn’t have that… I wouldn’t have had the context and the networks.”

Simon was on the cusp of throwing his first exhibition as a visual artist two years ago.  This would have been his first opportunity to demonstrate a creative shift from being a muralist. The pandemic scuppered those plans.

With Simon and Bryan’s creative and professional pursuits stymied by COVID-19 restrictions, a creative alliance forged through clothing was mutually beneficial. When Simon’s not designing gear for the venue, he’s is working on the venue’s interior walls, painting murals of icon Cyndi Lauper and Twin Peaks character Laura Palmer to keep the punters company.

Simon and Bryan both want life to return to normal, for the sake of the young people Broadcast Bar services as much as for themselves. Bryan estimates two-thirds of those who walk through Broadcast Bar’s doors are under the age of 18.

Many of the bands the venue books are from that demographic, too. The duo both want these young people to have the experiences regular life has afforded people of earlier generations. 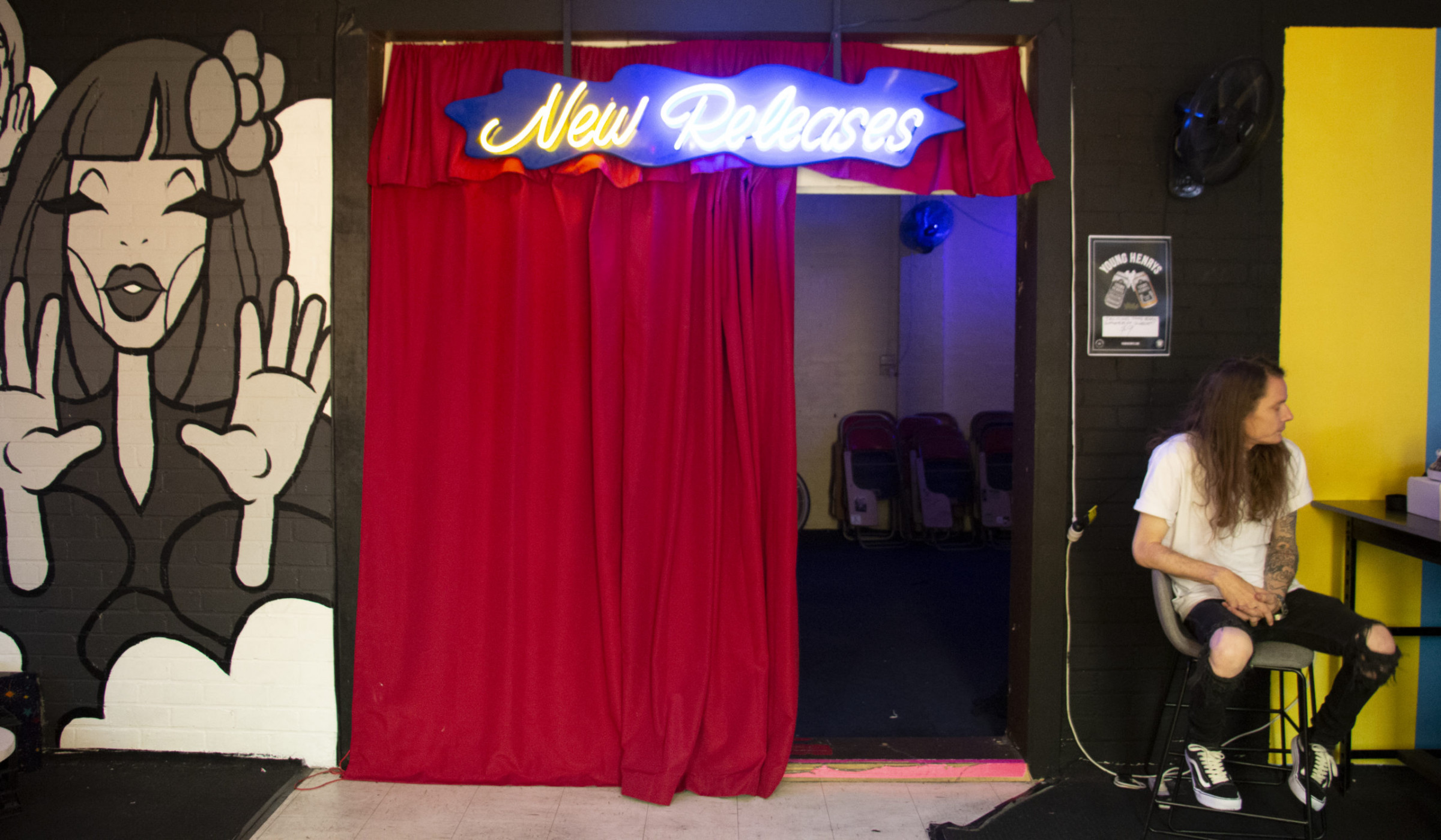 “But in these horrible, challenging COVID times, this wave of young bands who have just come through has been a godsend. There’s no shortage of them.”

The young bands that have been able to play over the last couple of years, and their audiences, have had a skewed experience of the music industry. Many of them might not have experienced a gig not impaired by coronavirus restrictions.

They have also been shouldered with the responsibility of supporting the venues they frequent at a time when it is life or death for live music venues. Offering up Broadcast Bar merchandise makes this an easier proposition.

“Buy a t-shirt, do a little something-something,” Simon says.

“It’s not just a bar. It’s actually a cultural hub. They do spoken [word] poetry nights here. There’s electronic dance music. We’ve been doing some hip-hop swap meets where locals come up and do record fairs.

“But primarily for these kids, this is where their musical career is born. They need that safe place where they can come and not get ripped off, not get treated like shit, get that appreciation as artists [and] be able to put on these shows and do these sorts of things.”