Chamber music in a BMX store on Gilbert Street makes more sense once you meet the people behind the music. 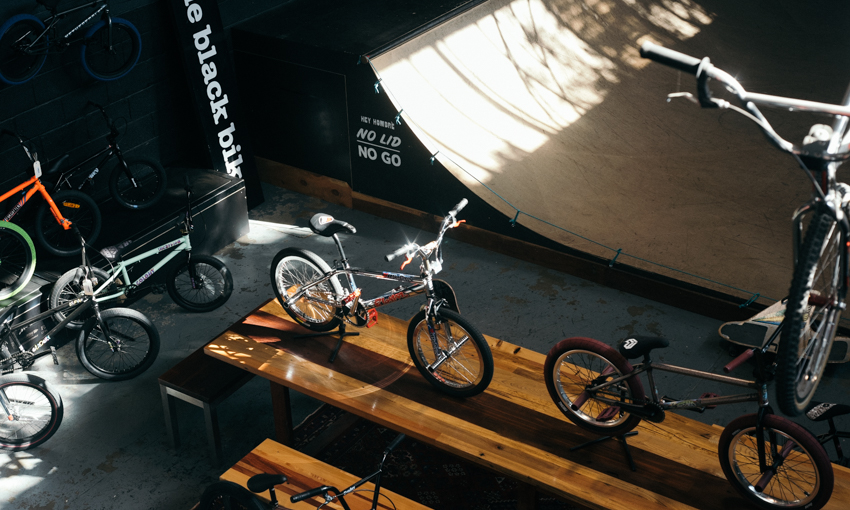 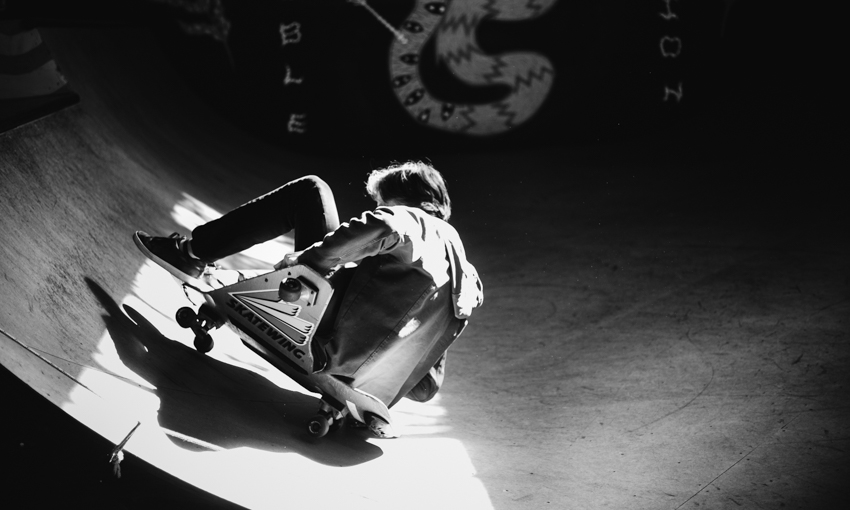 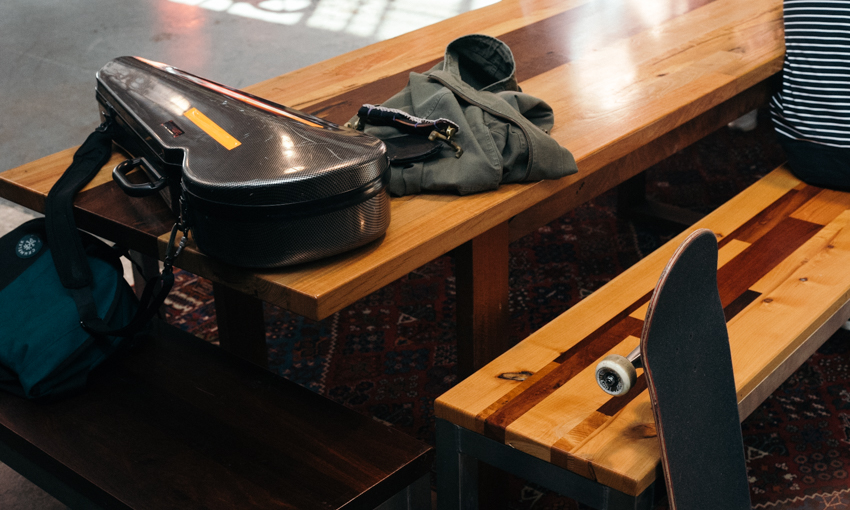 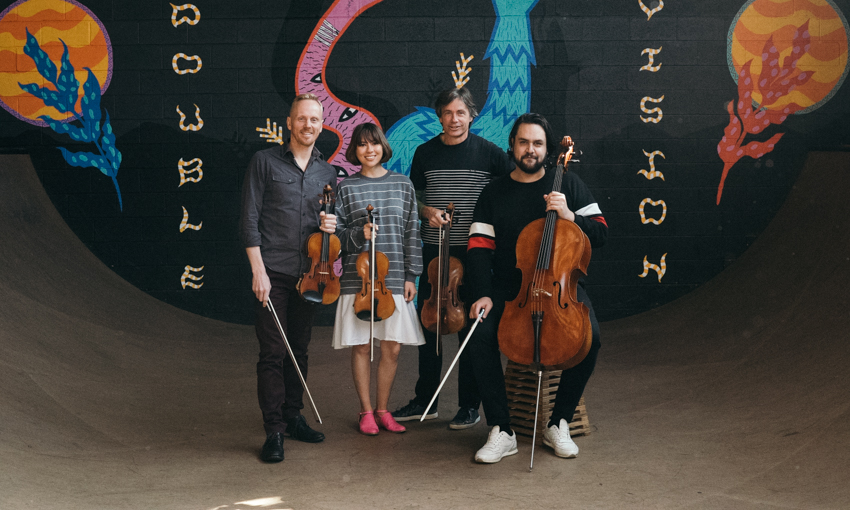 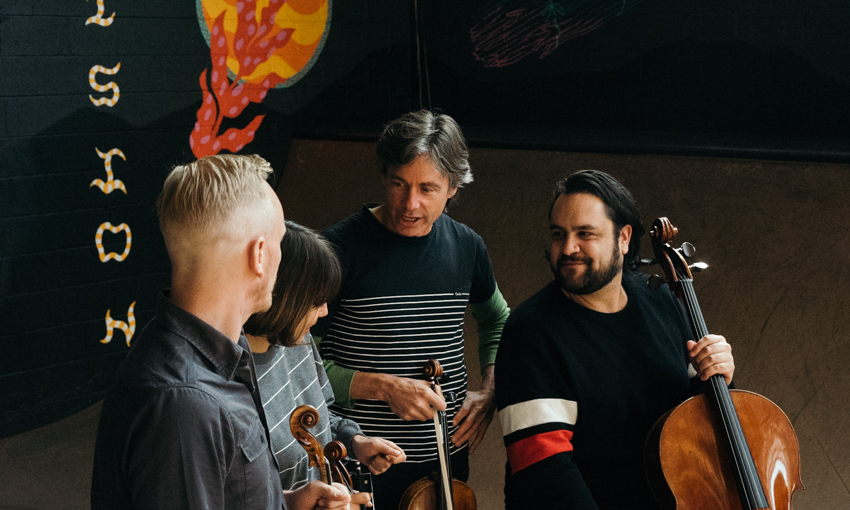 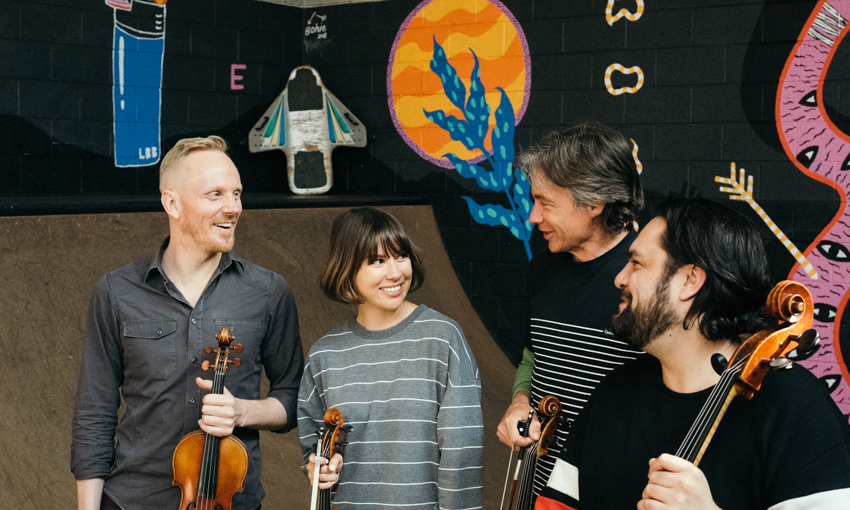 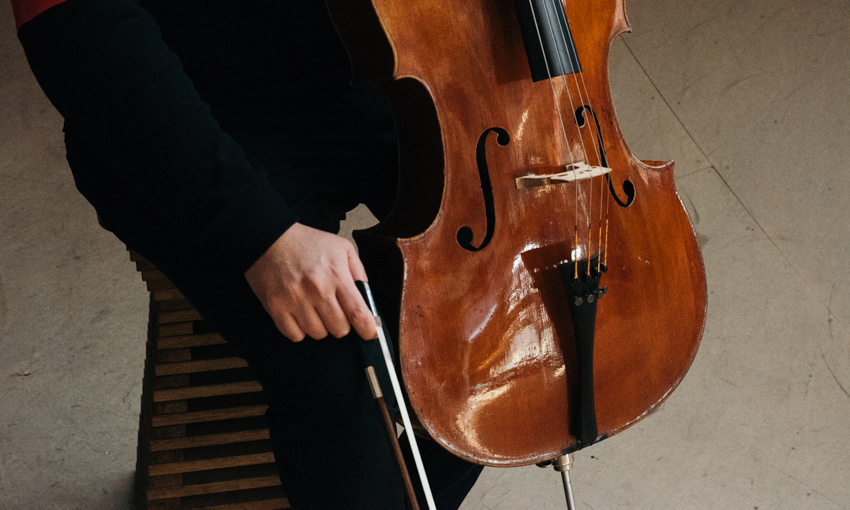 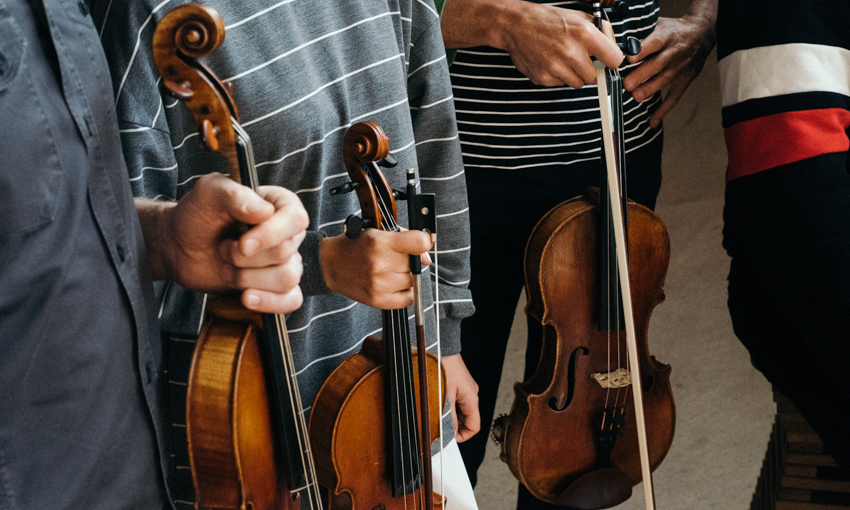 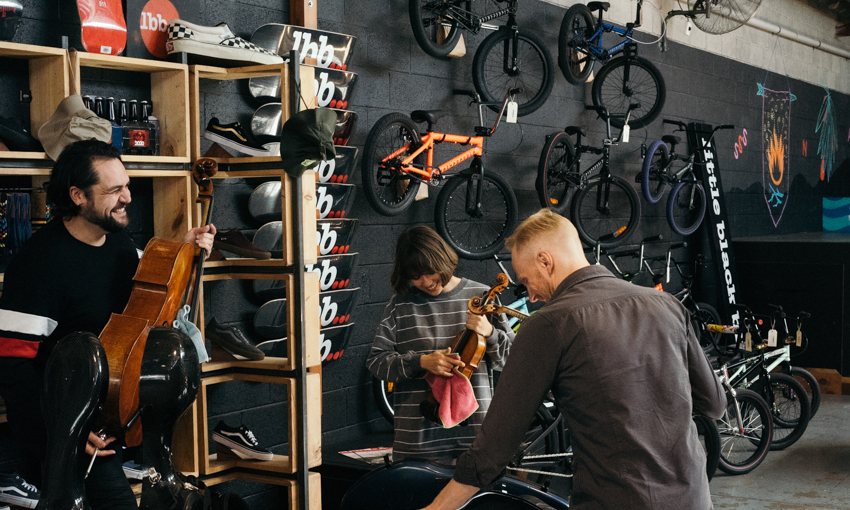 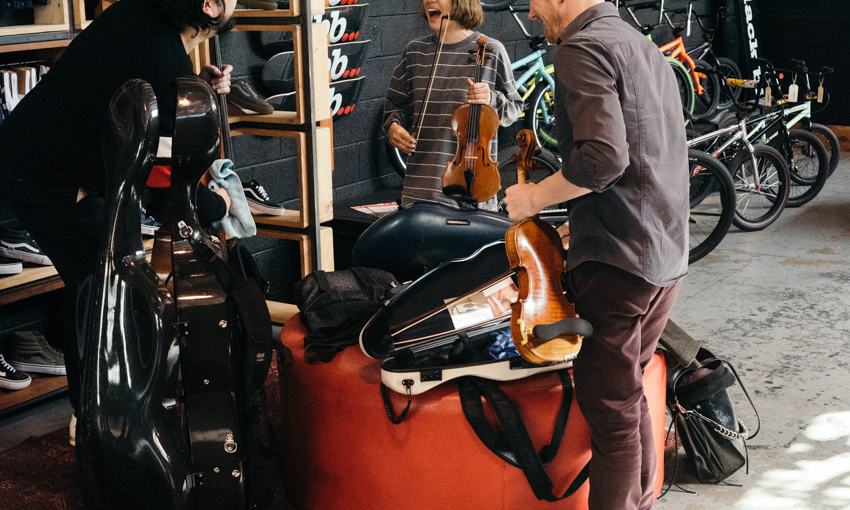 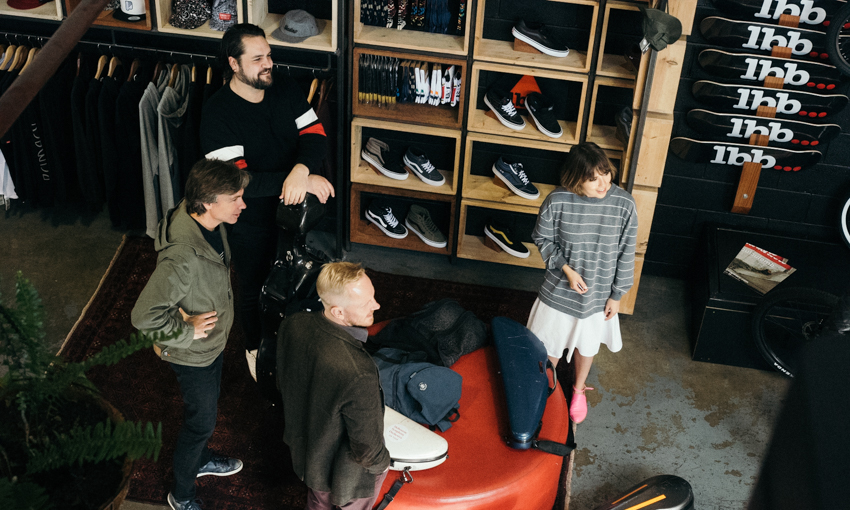 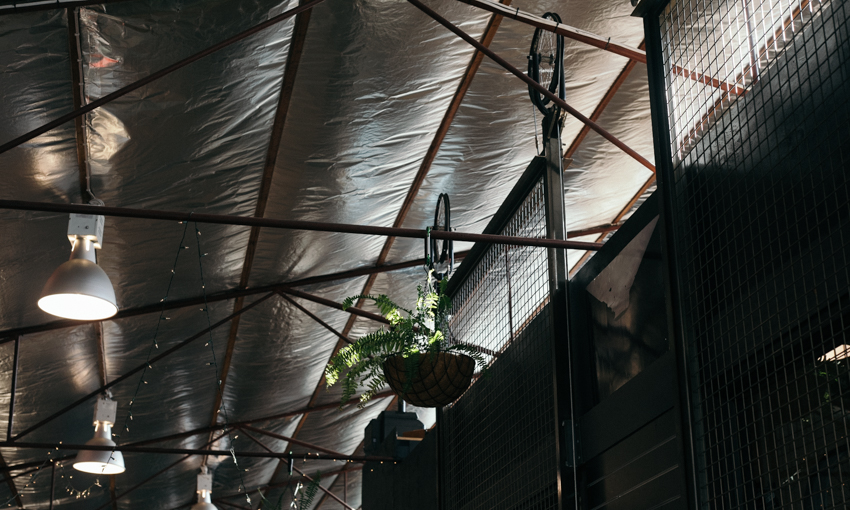 The Australian String Quartet doesn’t want to be known as ‘innovative’ for their concept of staging disruptive, small-scale and intimate concerts in unusual locations so much as they’d like to be considered traditional.

“I think it’d be interesting to know where these instruments have played over their 250 year history,” says stalwart of the Quartet and viola player Stephen King. “They’ve been in all sorts of places that aren’t concert halls and we’re just taking [the instruments] back there. It’s not innovative really – this is just music for the people.”

Close Quarters concerts are performed in unique and interesting spaces all around Australia and last around 60 minutes. Tickets are released close to the dates of the performances.

Stephen clasps the neck of his viola as he speaks. His index finger and thumb holding his bow, while the remaining three fingers (and friction) do their bit to stop gravity pulling a part-share of $6.1 million to the ground.

Stephen’s instrument, and those of each member of the Australian String Quartet’s ensemble, are wooden time machines that have travelled (albeit very slowly) from the 18th Century to the present day. They were made by luthier Giovanni Battista Guadagnini in Italy between 1743 -1784 and they now live in Adelaide, South Australia – owned by Ukaria and loaned to the Quartet to play.

Each piece of wood is worth millions.

But this fact can stop young audiences at the door of ASQ performances. It’s easier for the mainstream to idolise a rap-billionaire than wrap their head around why some older, usually white, people would care about technology and music fashioned before morse code was a thing.

So two years ago the ASQ decided to break down anything intimidating, everything formal about their performance and emphasise the music as the core of what they do.

“That’s where the origin comes from,” says Blair about the nature of quartet music.

“Hence why it’s called chamber music and hence why we want to do [concerts in unusual locations] and bring it back to what this style of performance was all about.” 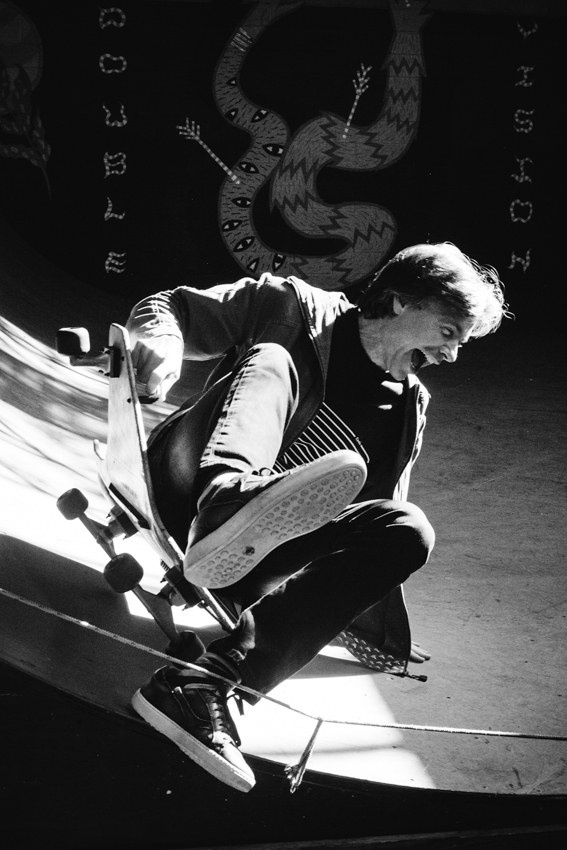 Although it was Stephen King’s first time in a wooden half-pipe playing his 1783 Guadagnini viola, he admitted to spending a lot of time in skate parks with his sons and their scooters 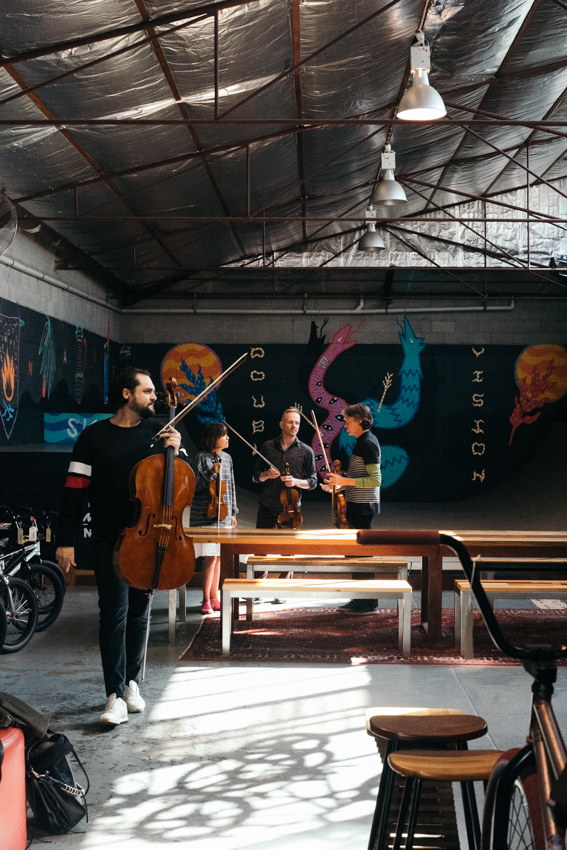 Close Quarters gigs are performed by the ASQ in small spaces, usually for a small audience of between 50 and 100 people. Tickets are $25, the musicians wear casual clothes – no tuxedos – they talk to the audience throughout the performance and have a drink in between pieces. And each member of the quartet insists this is how it would have been done in 1750AD.

“We’re very encouraging of whatever comes out of the audience,” says violinist Francesca Hiew.

Knowing when to clap at a classical music concert creates palpable tension in the audience. There is fear there – you do not want to be the first to clap at the incorrect time.

“Spontaneous applause is great,” he says. “People – especially young people – want an experience. They don’t just want to sit down and listen to music but they want music and an atmosphere as well.”

And the content is relevant. While today’s mainstream musicians speak of angst and love, hope and despair through their lyrics, Francesca believes the same emotional content can be found in classical compositions. 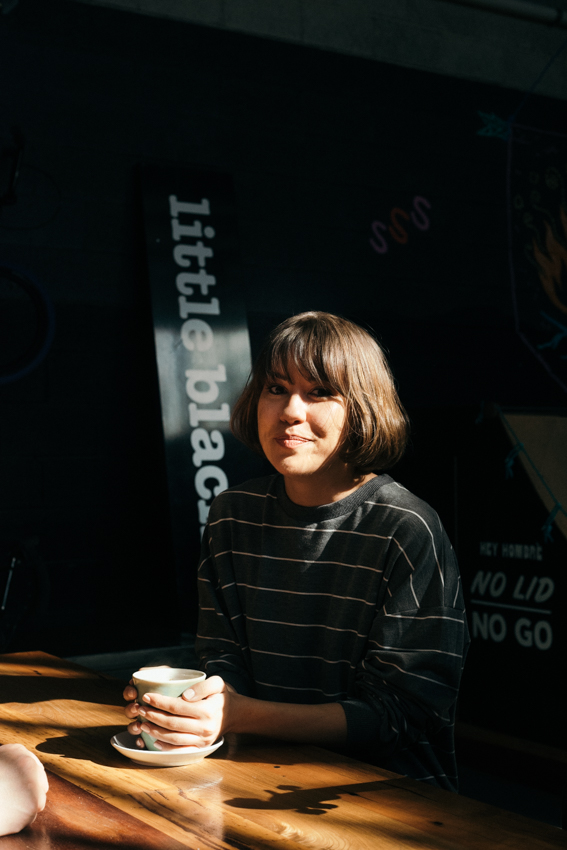 “We’ll be playing a bit of Schubert in our next season,” says Francesca. “One of the pieces we are playing – he was 26 when he wrote it.

“He was going through all the same things – in a different time – but all the same things people go through at this age like worthlessness, despair and love and hope. All the same emotions as artists, musicians today write about in new songs. But Schubert was doing this too –pouring his heart out in the way of his time.”

CityMag isn’t entirely sold on the synergy of classical music in a half-pipe. The quartet admit this is the first time they’ve stood in a timber half-pipe, let alone played in one. However, it doesn’t matter that CityMag isn’t sold on the idea because the performance at Little Black Bike on Gilbert Street sold out almost the instant it was announced.

The location isn’t about trying to make the ASQ look cool but rather it’s about disrupting the journey classical music has been on since some perfectionist and potentially grumpy composers in Vienna decided the audience should sit down and shut up and clap when they were told to.

Each member of the quartet agrees with Stephen when he says the reason behind the ASQs Close Quarters performances is to question where music has come to and where music originally came from.

“What have we been doing wrong in the last century or so, that numbers are dwindling for this type of music and why aren’t we as much a part of popular culture as we once were? We have to take it to people. It’s that simple.”