Three men walk into a bar. And every online media outlet in Adelaide (CityMag included) rushes in after them looking for the next man-opens-bar headline. 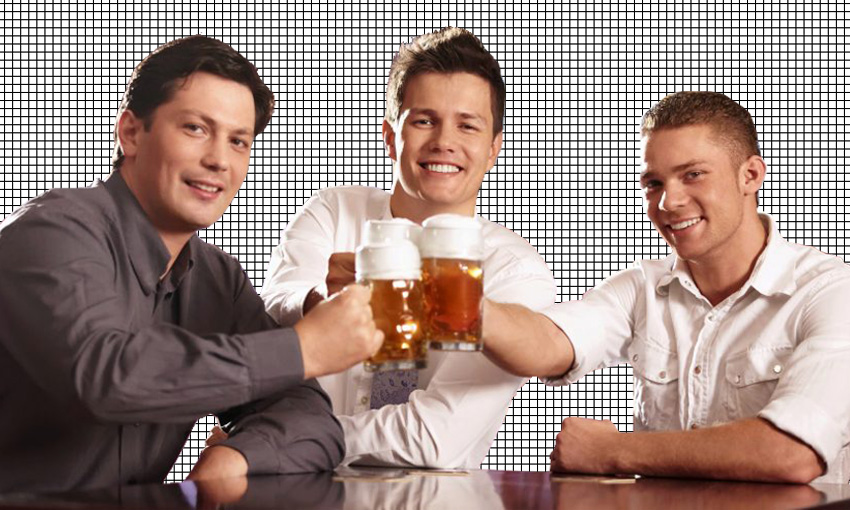 When I was editor of CityMag (absolute aeons ago – more than a whole year ago), a friend of mine had a favourite joke.

This, he thought, was very funny. He was right – both because the title is a reasonably accurate reflection of CityMag’s online content and because he knew that I didn’t want that to be the case.

CityMag was and is regularly lampooned for writing far too much about new bars, new restaurants, and – more specifically and very importantly – for focussing far too heavily on the venues opened by men. Usually white men. Sometimes the venues are opened by whole hordes of them – groups of seven or more at a time.

The site is often dominated by pictures of these men – a quick scroll will reveal them standing (usually with arms crossed over their chests to hide their gently expanding bellies), shoulder to shoulder with their equally male peers, in front of a venue in some early stage of disrepair or renovation. You don’t need to look at the site, you can see the photo in your mind. You’ve seen its ilk enough times.

Farrin Foster is the founding editor of CityMag and is currently driving the circumference of Australia in search of good stories that haven’t been told.

During my editorship, emails complaining about this would come in with steady regularity. Apparently, they still do. The authors of each email would appeal, reasonably, to the editor – asking that as the person in charge of content we leave behind this obsession with men who open venues. Surely, surely, they plead, in 2019 (or 2018, or ’17, or ’16, or ’15, or whenever the bloody email was written), it was time to offer at least equal space to diverse people and achievements not related to food and booze.

Well, yes. The authors of these emails are very correct. They are also very naïve to the realities of media.

At CityMag we were equally naïve to the realities in the beginning of the publication’s life when we only created the quarterly printed magazine. In those heady days of poverty and irrelevance, we wrote about things we thought were important for the city and were stoked when one or two people told us they liked it. We wrote about women and art and music and ideas and we were very tired and misanthropic because we also ran a fairly unsuccessful café and worked freelance jobs so we could pay for food and rent (and, yes, quite a lot of Campari).

One year into the magazine’s life, we launched the website. No-one read it. A few hundred people here, a few hundred there. Advertisers find these numbers funny. The going rate for online advertising is based on a Cost Per 1,000 readers – meaning an ad placement on the site (when it launched) was worth approximately and exactly nothing.

Our terrible performance as a website changed whenever we published a story about a new venue being opened by one of Adelaide’s established hospitality darlings. We’ve always covered the food and beverage scene because we have always been a part of it – working in it or (like I said) running our own f&b venture. But, what we discovered when we published news of our friends’ and colleagues’ new ventures was an absolute and iron-clad correlation with a spike in readership. Not a few hundred, but as many as 10,000 on one particular new venue opening.

And so, we wrote more of these stories. And we must continue to write them, because readers reliably continue to read them and advertisers reliably pay to be next to them. While a few readers may protest in their emails they’re sick of New Bar Weekly, the numbers (I’m told exponential growth on the site this year) show otherwise. I didn’t know it when I was an idealistic journalism student, and only slightly wiser when we launched CityMag – but, media and advertising is a numbers game. I might have been the editor, but the numbers were my boss.

So, yes, we must write about all these bars if we want the publication to thrive. Still – we could surely write about the ones opened by women. And certainly we could, if there were some to write about.

It is a stark and terrible truth of the small bar boom that it has greatly benefitted men and hardly made any difference to the status of female entrepreneurship in the city. There are some notable and wonderful exceptions. CityMag’s online editor Johnny von Einem chases female-identifying venue owners, such as the people at Sparkke, for stories with the fervour of a reporter who is terrified his former boss is watching him judgementally. (Side note – I am, Johnny. I’m watching you. And you’re doing a much better job than I ever did.)

But, the vast majority of new venues are still opened by men. Most of them are opened by white men. Sometimes there are women co-owners involved. Even then – interview requests asking to speak with that woman are often redirected, and the result is quotes from the men, which – in turn – means the story offers more real estate to the man and his opinions.

The media has a role to play in elevating and transforming our cultural conversation. But, it is also dying a slow death in an era where its business model has caved in and we’re all scrabbling around in an absolute fuck-fight with no idea if we’re even useful to anyone or if we’re all about to be superseded by Instagram Story, or more likely, some more inane version of SnapChat. I hear WeChat is a way of life in China.

None of this is an excuse or your problem – you should judge the media harshly.

The judgement of CityMag’s readers has made me a better journalist and a person who is only interested in representing varied, lesser-heard voices. It is also the harsh judgment of a small handful of readers (and a sense of personal ethics) that motivates Johnny and the other writers at CityMag to continue creating articles about women and art and music and heaps of other non-bar related people and things – even though, usually, far less people read those stories.

But, you should also judge a society harshly when most of the people it empowers to start a business are white men. And when its chief interest seems to be substances you can put in your mouth that are safe to swallow and taste good.

After all – the media doesn’t make the news, we just report it.

If you’re interested in understanding the internet’s business model, you should read this piece by Annie Hastwell on the impact of CPM on journalism here.