Attending an arts festival is not the same as political action

In 2018, Laura Kroetsch left Adelaide Writers’ Week after seven years in the job.

She then joined Dark Mofo, the arts festival affiliated with Hobart’s Museum of Old and New Art, coming on as director of its ideas component, Dark + Dangerous Thoughts. And it was announced this month Laura would officially join JLF Adelaide as a festival advisor, after programming a stage at the festival’s inaugural event last year.

Knowing this, you might expect Laura to be a strong advocate for the power and importance of arts and ideas festivals – which she is. However, Laura has increasingly become skeptical about what real effects these gatherings are able to have on public discourse.

She has also become wary of how, by purchasing a ticket and listening to a refugee speak about their plight, well-meaning members of the public can be falsely convinced they’re helping to change the political status quo.

“My doubt has been coming for a few years,” she told CityMag at the beginning of May.

“One of the things that makes me uneasy about the way festivals can be so left-leaning [is] because I think it confuses entertainment with political action.”

Below, in an abridged conversation, Laura Kroetsch talks CityMag through the evolution of her philosophy on arts festivals.

CityMag: How did Dark Mofo compare with your experience with Adelaide Writers’ Week?
Laura Kroetsch: Oh god, [Dark Mofo] is a different world. They approached me, I guess it was in 2017, and they wanted to do an ideas festival that came out of the philosophy of Mona but would sit in Dark Mofo. But it’s interesting; it’s a very collaborative model, which is great.

The thing that we do that’s a bit different is we try to present all political sides. So last year that was hard for people to understand a little bit. Some of the journalists who really identified as left were like, ‘You can’t do that.’ I’m like, ‘We can. We’re not talking about putting extremists on.’

The point is not to put somebody horrible up there who’s just going to say ‘I hate black people,’ it’s about conservative politics. And literary festivals do have a tendency to swing left. We have to remember that we don’t all agree, you know? I think it’s interesting in Australia, because obviously there is a swing to the right going on.

Did Dark Mofo’s brand give you licence to put forward more extreme ideas?
Absolutely. That was kind of the remit. And the other thing is we wanted to not just rely on commentators, but people who had skin in the game. So people who, through their lived experience, took a position. So we had an animal rights person, and a soldier, and a child soldier. And I think that’s important, because I think it’s harder to hate or disagree when there’s a human sitting there going ‘This is why I did what I did.’ It was a really interesting experience.

What was your experience of Dark Mofo before taking the job?
Mofo’s been going, I think, for seven years and I’d been once. I loved it. It’s insane. And the design of it is so beautiful.

The thing I most loved was it had a lot of young people in it. Writers’ Week is an older person’s festival, and Adelaide Festival is certainly an older person’s festival. But Dark Mofo was very much going for everyone, so there still is the crazy heavy metal night and the Tasmanian Symphony Orchestra. And I had never worked for an organisation that was really actually delivering on a wide spread of audience – but they program for it.

Did that mean you had to change your approach?
So I worked with Elizabeth Pearce, she’s the voice of Mona, and it was a really interesting learning curve for me, but it also made me really aware of my left bias, and it really made me go, ‘Ok, I do like to preach to the converted, apparently.’

It encouraged me to be really sympathetic to other points of view… There’s a nominal theme to the festival, [which] was incarceration. Incarceration is not usually something that you think about, but we thought about killing and being in jail, and we did a session on Aboriginal imprisonment, and those are just not normal festival fare. And so I liked thinking about different ways of presenting things.

Some of it they would say was crazy. We did a session with a child soldier (Niromi de Soyza), a [Victoria Cross] winner (Mark Donaldson), and an ex-jihadist (Muhammad Manwar Ali).

For the Sri Lankan woman, [Niromi], who’d been a Tamil Tiger [and] who immigrated to Australia, it was the first time she’d been able to talk to another soldier, and so they ended up having this incredible bond and spending all of this time talking. It just really gave me different ways of looking at things, the way we share experiences, and the way we have to be careful who we call a terrorist, and what that is.

And also, we had to do it by video link. We couldn’t get [Muhammad] through immigration, and that in itself was a very, very interesting process. 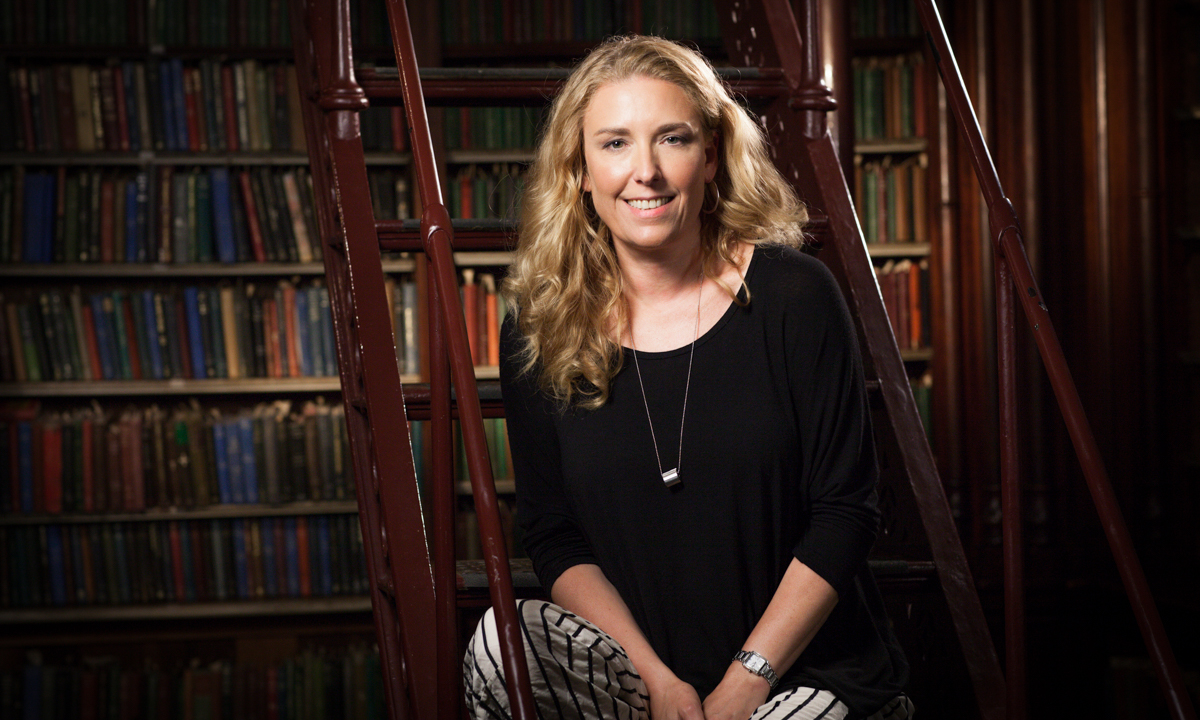 What will you bring from your experience at Dark Mofo and Adelaide Writers’ Week into JLF Adelaide this year?
Definitely one of the things I’ve observed, both at Writers’ Week and at Mofo, to a lesser extent, is we have enormous anxieties in Australia about Asia, and particularly Indonesia and China. The only death threat I ever got at Writers’ Week was about Clive Hamilton talking about China. So I definitely think that we will be willing to be edgy.

Why is it important to hear those voices?
I’m American, obviously; one of the things I think in the West is we forget our privilege, and I think one of the things that can happen when you are listening to different voices, be they within this culture – like I’m doing a session at Dark Mofo on identity and I’ve included class, and I’m doing a session on white men, because they’re really angry and we have to do something about them – but I think we have to keep these voices in the mix, because I think it’s useful to reflect on ourselves.

I think we have to be careful that we don’t allow our privilege to blind us, and I think in a country like Australia it’s easy [to be blinded] because it’s easy to live here and it’s beautiful and it looks like it doesn’t have the problems it does… And so I think yeah, we’ll definitely be having that [conversation] there.

I’m sure I’m going to get in trouble for saying this, but there’s a kind of privilege attached to being able to be safe. Good on Australia for finally getting gay marriage, but within other cultures that’s not even a conversation. It’s a death sentence. And so I think that those kinds of issues around identity politics, we need to refresh how we think about it. I think sometimes we do have a little bit of White People Problems, you know? The not-quite-crispy-enough biscotti.

Do you mean we should be working to extend the advances we’ve made, like gay marriage, elsewhere?
I think that we do have to think of ourselves as citizens of the world. When I was sitting at Writers’ Week on the first day, there was a Palestinian Syrian – which meant of course that he had no papers – who the German government was representing, and they did get him [into] Australia. And various women – and I know I’m going to get in trouble for this – got up and said ‘I hope you know we love you, I hope you know we support you,’ and all I could think of was Manus Island. And I said ‘That’s not a political act. You coming and seeing this person is not an act of politics.’

Just by going to an event, doesn’t mean you’re engaging with the political system. Voting means you’re engaging in the political system, you know? And that, I think, is one of the things that makes me uneasy about the way festivals can be so left-leaning, because I think it confuses entertainment with political action. I mean, I like listening to the ABC journalists too, but that’s not the same as [political action].

Read our conversation with Laura from 2016 on the power of words here.

Did that revelation change the way you think about programming festivals?
My doubt has been coming for a few years. I very much started my career in books very much art for art’s sake, and as I get older, yeah, it’s really changed. 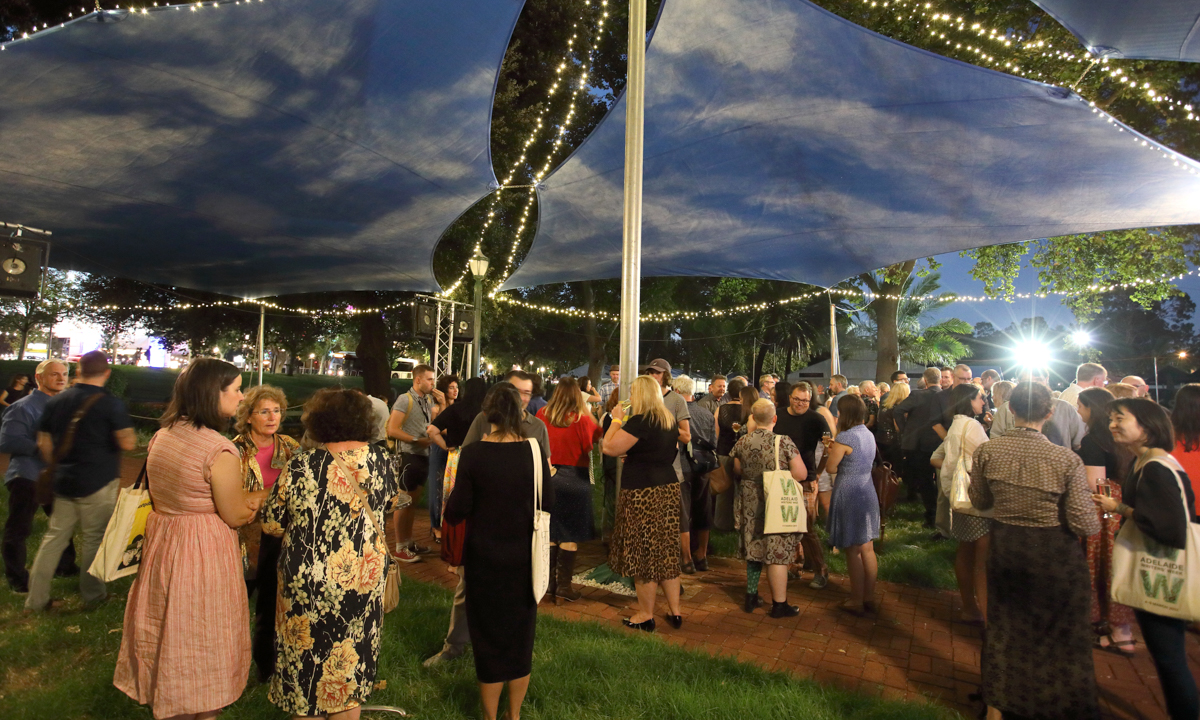 Is there a way to spur people to action through your programming?
Look, I remember a woman came up to me once and said ‘I know what you’re saying about climate change, and I’m not saying I agree with you but I’m going to think about it,’ and she was mad as hell. I said ‘Alright.’

We’ve lost so much of our ability to have conversations and to have balanced conversations, and I would like to think ideas festivals are a place you can go and listen to someone who disagrees with you. And maybe, even if it’s for half an hour, [you’re prompted to think].

Art is never going to change the world. Art is an entertainment, it’s necessary, I do believe it helps us develop empathy, but I want that lady to think about Manus. I don’t want her to tell a man who’s living in Berlin – because a country was decent enough to take him out of a refugee camp – that we love him, because we don’t. We don’t love him at all. He was exactly who would have gone to Manus. A brown man. With an education!

So yeah, I always gotta tug the tiger’s tail – why? But I do. And I think literary festivals should.

Is this the effect you want to have through your programming at JLF Adelaide?
I hope so. I had some interesting experiences, I always do at festivals, I always try to talk to [people], and, you know, those women talking about the experience of sex in India for women, yeah, it totally shocked the white ones, and the young Indians were like ‘Yep.’

I guess, in a way, I just want people to remember there’s a reason we wanted to come here – including myself. This is a really nice place to live… But then I hope people just have fun. And I hope that they just laugh and think ‘Oh, that’s weird and strange but interesting and I heard some whacky music and William Dalrymple told us about history.’

I want it to be fun. It’s not supposed to be a hair shirt, but ideas should push back a little.