Chewing the abstract fat with ‘Conversations in Colour’

The latest body of work by long-time friends and interstate artistic collaborators, Gab Cole and Lucas Croall, comprises 11 large canvases that speak to the stunning patterns found in nature and their own evolving creative connection. 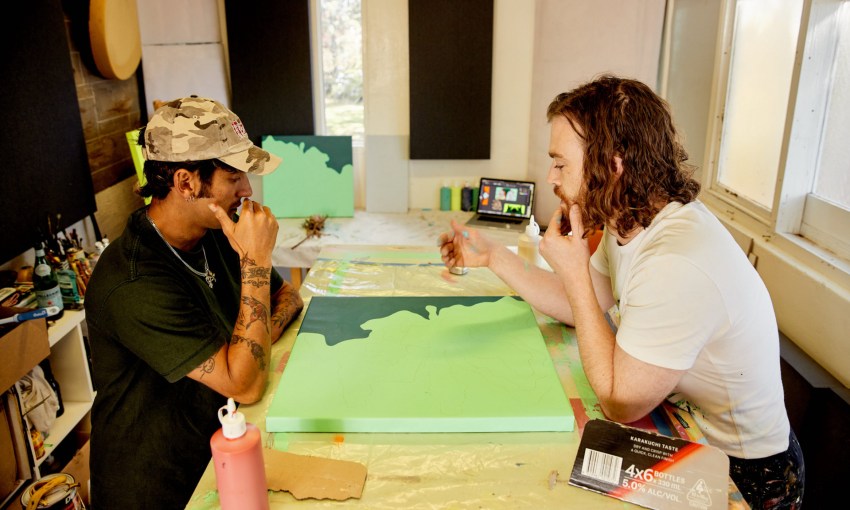 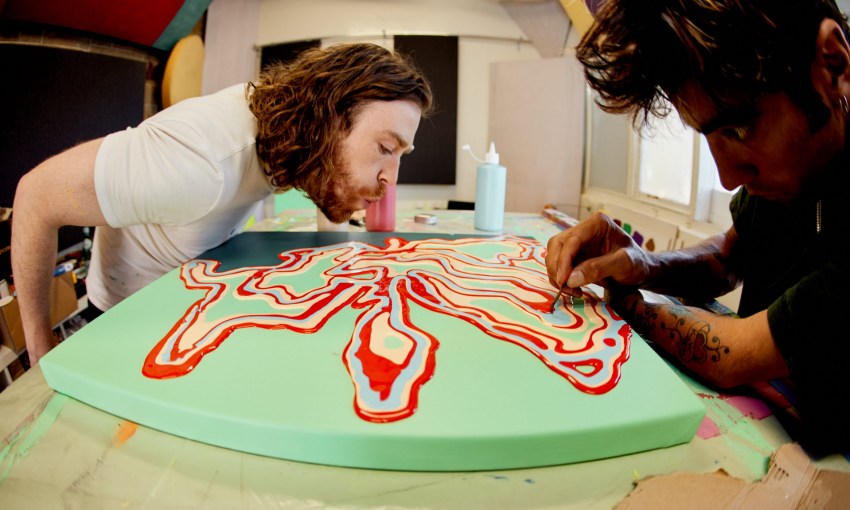 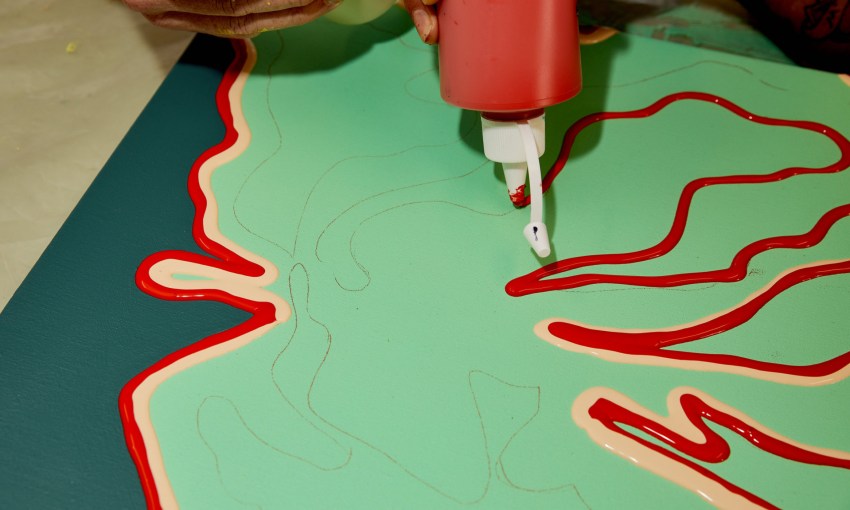 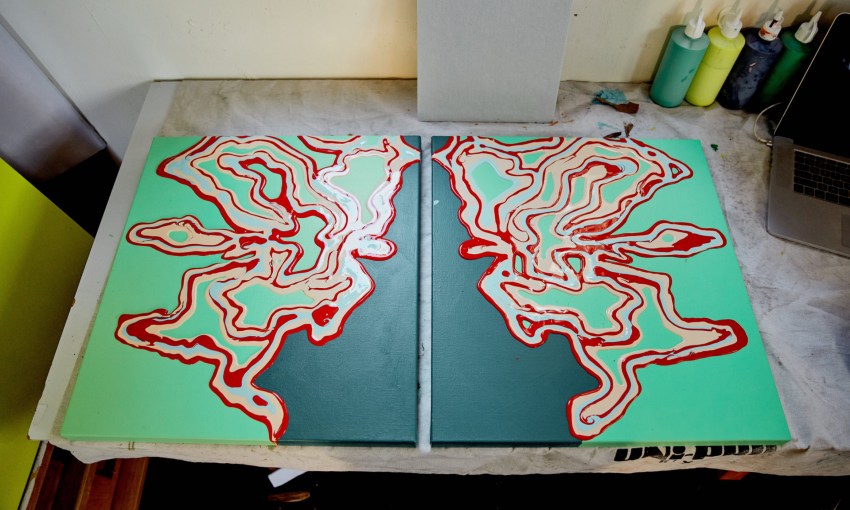 When CityMag speaks to visual artists Gab Cole and Lucas Croall about the duo’s upcoming Fringe exhibition, they’re on the road – driving from Melbourne to Adelaide. Although they’ve got about 700km ahead of them, they’ve already travelled a fair distance together.

In 2016, the friends and artistic collaborators debuted 35 paintings under the Nu Camo banner, which, in a tongue-in-cheek way, aesthetically explored the naturally occurring pattern of camouflage. Conversations in Colour, their latest exhibition, is an extension of this dialogue.

“Conversations in Colour is a body of work exploring colours and emulating patterns in nature,” Lucas says, adding wood grain – the wobbly pattern seen in a cut wood surface – was the starting point for the 11 painted canvases.

“The basis of those forms really looks like a camouflage pattern quite easily. It’s sort of just playing on those themes really, or looking to extend that conversation into something that’s more abstracted and something that has, like, an element of chance.” 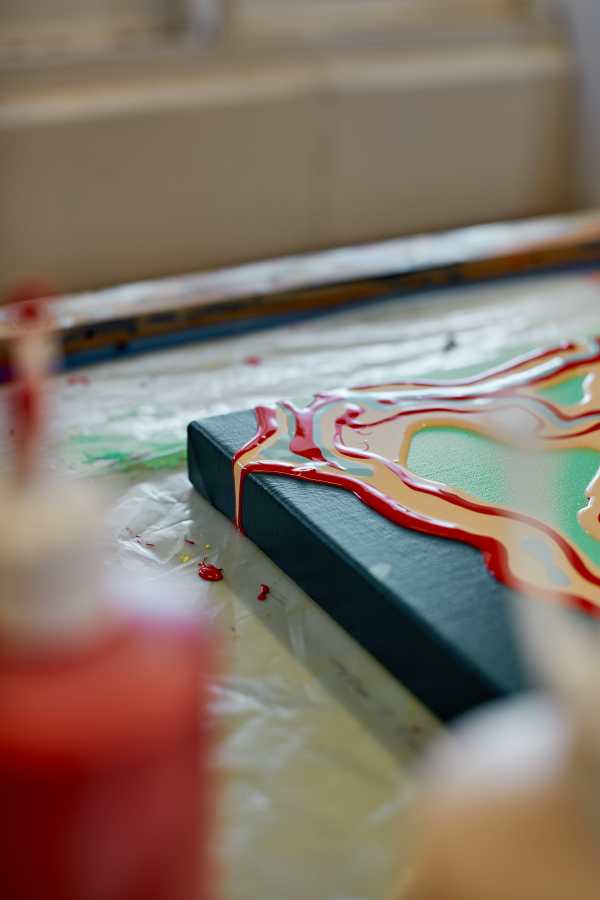 On display in the KWP! Rundle Street stairwell from next week, the brilliant, bright canvases vary in size from 700cm to 1200cm. They feature Rorschach-like patterns with tight edges and near-perfect symmetry.

“The show definitely plays on the engagement of colour and we invite people to participate, too,” Gab says.

“So exploring non-traditional colour rituals that you would see in murals and colour design work.

“People can take away what they want. It’s pretty easy to see faces and images and whatnot.”

Although it’s been six years since that aforementioned Nu Camo exhibition, the duo’s indelible markings can still be found in the city. (Bright geometric shapes adorn the western side of Hindley Street’s Barbecue Inn restaurant and their moniker, Beyond Killa, is still part of the postcode 5000’s street parlance.)

A lot has also happened in those six years since the exhibition, with Gab relocating to Victoria four years ago. But this, incidentally, gave the pair enough geographical and referential space to explore new concepts.

While whittling away at their own very separate artistic careers, with solo exhibitions and ventures, the distance brought an element of something new to the work they made together. 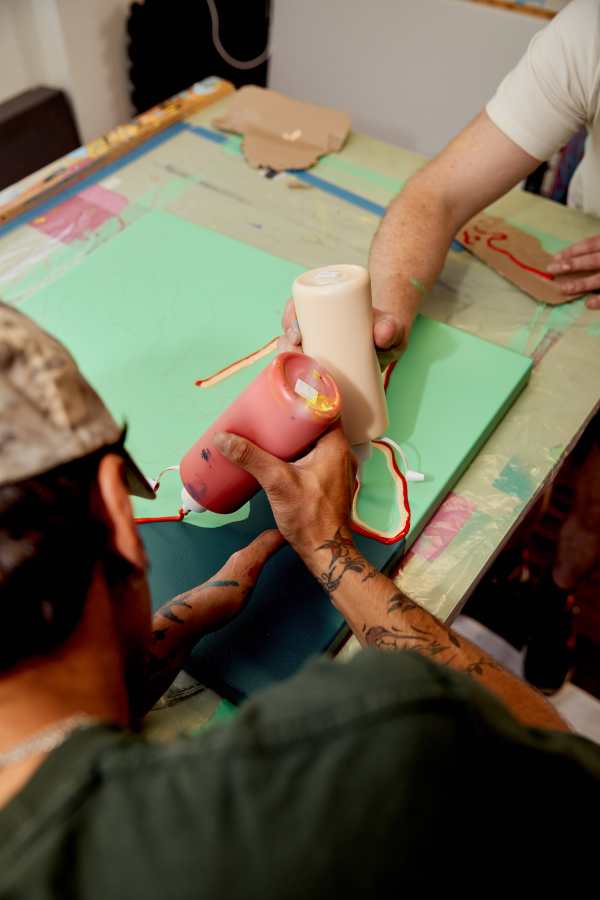 Filling in the blanks

“When we used to be together, we were kind of referencing the same works and the same stuff. Now our taste is quite different,” Gab says. “It’s nice to connect with people who you don’t live in the same place with.”

Their personal growth also led to developing their own personal confidence, which is on show at Conversations in Colour. Although in the exhibition’s embryonic stages Gab and Lucas shared ideas and sketches from their respective cities safely through text messages, the final product required guts.

“We were looking to make as much impact with our material as possible and, in this case, that was mainly large blocks of colour set off by very generous pouring of paints using sauce bottles,” Lucas says.

“There’s no real coming back from it. We’re working with that confidence and trusting the marks and letting the marks dictate the outcome,” Gab adds.

When asked how long they see their creative collaboration and long-distance artistic relationship lasting, they both answer that it’s pretty open-ended. Gab says he likes testing his artistic ego with the push and pull that comes with working with someone with wildly different ideas.

Lucas agrees: “It’s about leaving your ego at the door and keeping as conversational as possible.”