From Game of Thrones to the Festival Centre

International set and costume designer Renate Henschke is back in her hometown and has plenty in-store for Adelaide audiences of The Club.

South Australian-born costume and production designer Renate Henschke’s résumé is an impressive thing to behold: she received a grant to study fashion in Ireland, had a clothing line for Topshop, and worked extensively in theatre, film and on numerous television series, including the multi-award-winning Game of Thrones and Vikings.

Tickets for The Club‘s remaining dates available at the link.

Most recently, Renate has put in long hours in the lead up to the opening of David Williamson’s iconic 1970s satire The Club, an all-female production from isthisyours? for State Theatre Company’s 2019 season.

“The girls did a season of the show in Belvoir, in Sydney, last year. But it was a very small budget and design team around the show,” says Renate.

“So, the challenge has been taking it from that form into this larger space, and trying to maintain the charm of the original production and the comedy and humour.

“Like we have these humorous wig drops; wigs are the elements that change to [show the] change of character, and we have this very, what seems, simple magnetic wig drop system in place. But, the amount of problems that have come out of that. We’ve been doing lots of basic, basic magnetic research.” 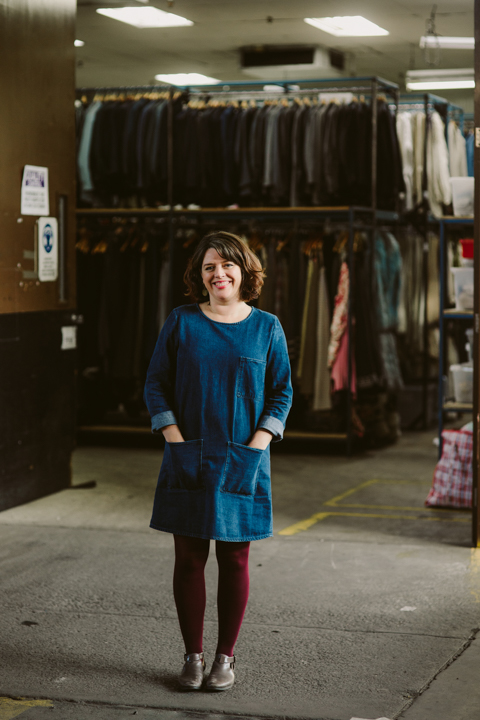 Signifying character changes has been integral for the three cast members as they tackle the male-centric play while remaining faithful to the text.

“The whole play is true to the script but the first act is a bit more traditional,” says Renate.

“The text is so witty and the vernacular is so Australian, it just feels right to set it in 1977. And even just visually, I love it. You can have so much fun with palette and styling. A lot of comedy can come through that.”

While looking for inspiration for the production, Renate discovered Adelaide’s recently demolished Footy Park was built around the same time as the play.

“It was very simple, and all the seats were freezing cold and it’s Besser brick, and I’m drawn to that aesthetic.

“I wanted the set to feel like it was a 1970s building and 1970s styling, but the history of the club is sort of represented in the ephemera and pictures on the wall. So just striking that balance between old and new.”

Creating the visual world of a production is central to any show. It not only assists the audience in following plot points and suspending disbelief, but it can allow actors to slip into roles more easily. It’s a craft Renate fell in love with in her 20s.

Having moved to Europe to study fashion, Renate’s clothing line was picked up by the multinational clothing retailer Topshop. But, Renate – an Irish permanent resident – found she didn‘t enjoy the business side of the fashion industry.

“There’s a really healthy film industry [in Ireland]. And I ended up working on lots of short films and things.

“My first big job was as part of a costume team in Belfast, and I went and worked on the second season of Game of Thrones in the extras department – and then I had the bug.”

Although based in Ireland, Renate remains connected to Adelaide, where her family still lives, returning to South Australia to work on projects such as the 2012 production, I Am Not An Animal – an installation performance set in the Adelaide Zoo.

Revist CityMag‘s 2018 chat with isthisyours?’s Louisa Mignone about adapting The Club at the link.

“I’ve since worked out that every other job in Adelaide has been linked to a person in that show. They’ve all ended up being my friends, they all run their own theatre companies or they’re designers themselves,” she says.

“A lot of the girls in The Club were in that.”

When Renate received the news that her mum was unwell, two years ago, she returned to Adelaide to be with her.

It is that passion for design that Renate continues to put into her work and, in the case of The Club, helped her to create, in a relatively short amount of time, an entire world for the isthisyours? troupe to inhabit.