“As a company we’re so used to creating the work ourselves and generating the material from our own experiences… and so to actually get a script – and the stipulation in our contract with Williamson is that we can’t change a word – for us, that’s a really big challenge,” says Louisa Mignone of Adelaide theatre company, isthisyours?.

The Club will run from 5 April to 20 April 2019 at the Space Theatre. For tickets and further information, see here.

Sticking to the script is just one of many challenges for the all-female group as they take on David Williamson’s iconic 1970s play, The Club – which features no female characters – for the State Theatre Company’s 2019 season. 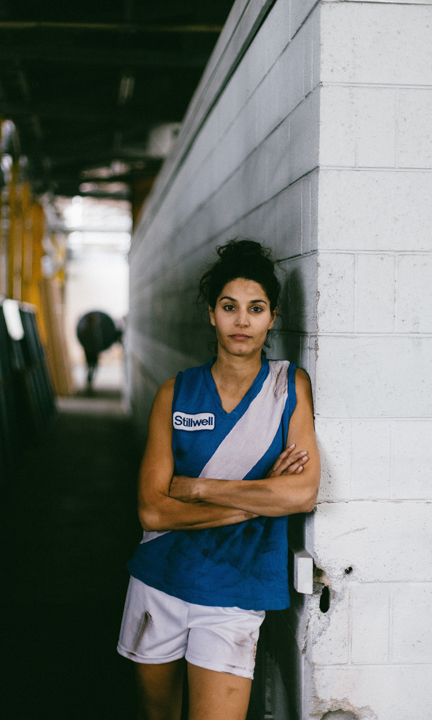 “We really wanted to just do a sort of male-centric Australian classic. That was the challenge,” Louisa continues.

“[My] perception of Williamson I remember as being very of-the-era – ‘70s and ‘80s and very male-centric, and the women don’t really play a big role.

“When we read [The Club] again, it’s quite funny. Yeah, it’s dated in one way, but in another way it’s not. He’s still showing these male characters, he’s not painting these men in a very nice light, and it’s just good writing.”

It’s also an interesting time to revisit the work, which examines football culture in the 1970s – a moment of great change in the sport’s history.

“The late ‘70s was the birth of the commercialisation of the sport, it was old traditions versus the innovation of change in the game for the better,” Louisa says.

“This whole play is about that struggle, as well as just men in power, etcetera. But we thought it was interesting because it correlates with what’s happening now, with the change in the face of football now that both genders are allowed to play.”

Despite the lack of female representation in the text – “There are wives, there are prostitutes, and there’s a stripper, but there’s not much else,” Louisa says – Williamson’s deconstruction of male machismo is just as relevant for a modern audience as when it was first written.

“I don’t know whether I could call it a feminist play, but I think he’s very aware of what he’s written,” Louisa reflects.

“Williamson’s deliberately written that to comment on that culture, so I think if you can look at it like that, like he’s not sugar-coating it, but he’s not also part of it, he’s just commenting on the culture of those clubrooms.”

It’s Louisa’s hope that new context will come through having these sentiments portrayed – for the first time in the play’s 40-year history – by female voices.

“It’s cool to explore and see what happens when you place things in different people’s mouths,” she says.

The Club will run from 5 April to 20 April 2019 at the Space Theatre. For tickets and further information, see here.