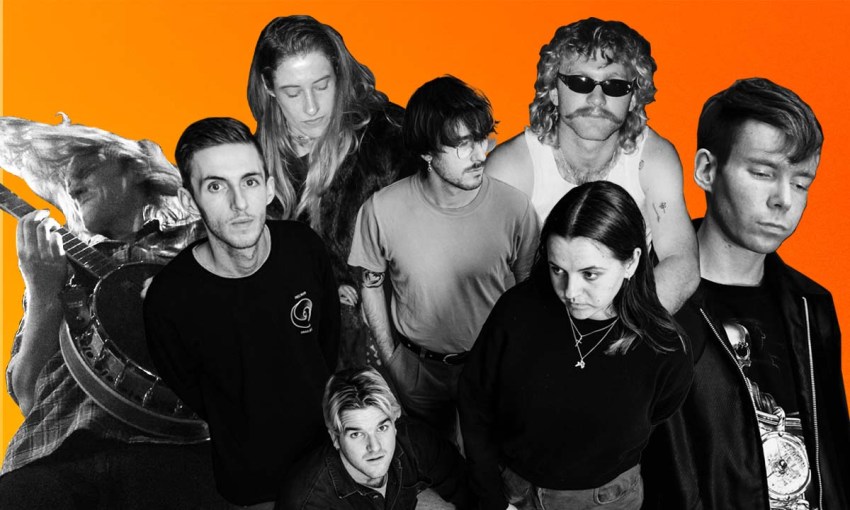 Indie Sleaze is having a moment, and so is producer Travis Cook. He’s released two new songs. One is called ‘bananas’ and it’s a jagged, saw-toothed sample collage of early 2000s bangers, giving this bygone era its well-deserved club renaissance.

Listen to this playlist on Apple Music or Spotify.

We imagine DJ Paris Hilton wearing fingerless gloves blasting this track – which riffs on the peak 2004 Gwen Stefani single ‘Hollaback Girl’ and the Yeah Yeah Yeahs iqonique 2009 burner ‘Heads Will Roll’– from within an Ibiza nightclub. Shutter shades are optional. MySpace page is mandatory. (AS)

House in the Tall Grass — ‘Lanterns’

Opening with driving rhythm and psych-inflected guitars, ‘Lanterns’, according to the single’s Bandcamp page, is about “living where you are” and “doing what can to make the world not suck, even in the face of massive looming global terror and world-destroying bastard capitalists that just eat, eat, eat.” Amen! The song’s socialist message goes some way to explain the chaotic use of the Russian Cyrillic alphabet in the single’s artwork, and the Soviet-era imagery used for House in the Tall Grass’ earlier single, ‘Heck’ (another anti-capitalist ditty). The band was founded in December 2020, and running through their back catalogue of releases (three available to date), there is not yet a consistent sound carrying through, but they’re one to keep an eye on. (JVE)

After a year-and-a-half hiatus (which accounts for about half of the band’s existence) noisy five-piece Big Town have released a a noisy five-track EP called BIG MISTAKE.

‘NUFF SAID’ is the record’s ear-splitting opus, and closes out the record with shrieking guitars and drums, strange pitch-shifted singing and fever-dream dialogue. The vocals smacks of someone soliloquising to themselves along Henley Beach Road, but gives energy, dynamism and intrigue. (AS)

I’ve written extensively about Colourblind’s sophomore EP, Semaphore, which was released last month (read all about it here), and I have very few words of praise left in my vocabulary that I haven’t already extended to the western suburbs troupe – however, now that it’s time to round up our favourite releases of July 2022, I must risk repeating myself to ensure you add the release to your streaming service of choice. The record’s title track melds the younger, brasher Colourblind, heard on their debut release of 2018, with the steadier hand of a slightly older Finn Cameron, the band’s singer and lyricist. It starts with a familiar guitar and drum line (who doesn’t enjoy being reminded of ‘1979’?) and Finn singing softly about the beginnings of a young friendship. Through the course of the song, the narrator and the protagonist grow up and life becomes more complicated, the song’s instrumentation builds and emotions swell, culminating in a throat-tearing call for connection: Flag for help! (JVE)

Indie-pop four-piece Pine Point released their first EP last month, following up the single ‘Mary’, which has been out since May. The entire record sounds like an afternoon spent laying on the grass, looking up at the clouds, pondering your direction in life and the nature of your existence within your community. ‘Clint’ ambles along like a walk through scrubland, with occasional descents into minor keys, as singer Elliot Oakes offers a shrugged lament for the sorrow of letting go of an old or unrequited love. (JVE)

In your playlist appears a spectral vision of slow country and western sadness in the form of Harriet Fraser Barbour’s Workhorse. ‘Darkness’ is a study of ageing and of the richness in story we lose when not giving our elders their due attention. The song’s protagonist, in the autumn their life, reflects on a full life with a partner, now gone, accepting the relationship’s inevitable end as time draws on. Harriet’s haunting vocals and the steady rhythm of the brushed snare will make you want to hold closely the ones you love. ‘Darkness’ will appear on Workhorse’s debut album, No Photographs, which is due for release in Frida, 12 August. (JVE)

‘You’ve gotta / Evade the echo chamber / The Ashford share house / I can’t blame ya’. There’s no one more accurately capturing Adelaide ennui than local jangly rock bands. Kurralta Park Grocery Club is the latest outfit to slice, dice and offer up this feeling.

The song employs South Australian symbolism – like Sturt’s Desert Pea, our state flower, instantly recognisable to older demographics, and the “Ashford share house” echo chamber (reeking of desperate dreams of moving to Melbourne) familiar to we non-Boomers – to explore listlessness and languor in the suburbs. (AS)